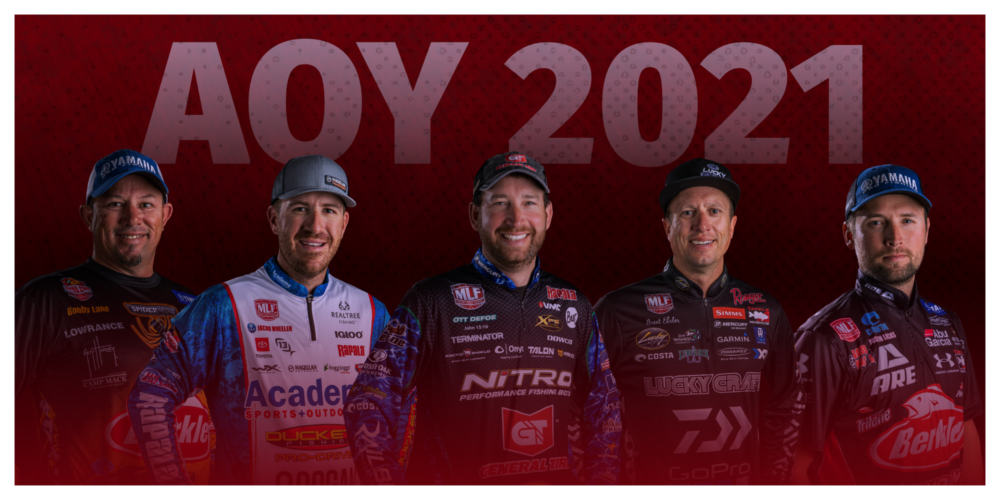 With only two events left in the Bass Pro Tour season, the AOY race is coming down to the wire.
July 9, 2021 • Joel Shangle • Bass Pro Tour

Heading into the last lap of the 2021 MLF Bass Pro Tour season – and with the smallmouth half of the schedule underway – the battle for the Angler of the Year trophy is shaping up to be a doozy.

Regardless of the year or the tournament circuit, the AOY race in the big leagues of professional bass fishing almost always comes down to two or three tournaments held on the smallmouth waters of the Great Lakes or nearby Northern Tier fisheries – in this case, the Bass Pro Tour’s final AOY act will play out on Lake Champlain and Lake St. Clair.

With Stage Five on the St. Lawrence recently finished and a month off before Stage Six, here are some things to ponder as the 2021 AOY race heats up.

DeFoe and Wheeler: The Champ-Champs

Ott DeFoe and Jacob Wheeler have dominated the 2021 Bass Pro Tour regular season: DeFoe won at Sam Rayburn and the Harris Chain, Wheeler claimed the trophy at Lake Travis and the St. Lawrence River – the pair of Tennessee pros have taken home 80% of the big red-and-silver trophies so far in 2021 (interrupted only by Kevin VanDam’s win at Lake Chickamauga).

Consequently, it’s no surprise that DeFoe and Wheeler sit first and third in the standings with two tournament remaining (DeFoe in first with 352 points, Wheeler with 338).

DeFoe started the season atop the AOY thanks to his win at Rayburn, and has not dipped lower than fourth in the standings, finishing in spots 1, 22, 1, 17 and 12, respectively, in the five regular-season events to date. He’s been the model of consistency, finishing an average of 7.4.

Wheeler made up 11 points on DeFoe with his win on the St. Lawrence and has chipped 26 points off of DeFoe’s lead since the Harris Chain event.

If either DeFoe or Wheeler eventually claim their first AOY awards, the common response will likely be: “It was only a matter of time.” DeFoe’s average AOY finish in the past five years is 6.2 (and that’s with a 16th-place finish in 2019 when he missed a tournament because of heart surgery); Wheeler’s AOY average is an unbelievable 4.6 (his lowest AOY finish in five years is ninth in 2018, on the Elite Series).

“It comes down to the pressure of it,” Wheeler admits. “You can’t afford even a tiny slip – more than likely, you’re not going to have three guys slip up, so you have to bring it. At this point of the season, when you’re in this position, you’re not thinking about playing it safe. You’re thinking about how you win the tournament to get as many points as possible to win AOY.”

Ehrler: He’s Been Here Before

Of all the anglers currently in the AOY Top 10, Brent Ehrler is the most familiar with the stresses of a two-tournament sprint to the finish: the California pro has finished in the top five in five AOY races in his career – four times on the FLW Tour, once on the Bass Pro Tour. He finished second (both times to David Dudley) in 2008 and 2011, and notched third-place AOY finishes in 2009, 2014 and 2019.

The Daiwa pro finished fifth in the past two Bass Pro Tour Events, so only Wheeler (second and first) is currently on a hotter streak.

With 311 and 309 points, respectively, Bobby Lane and Justin Lucas lurk just below DeFoe, Ehrler and Wheeler. Lane led the AOY race after the Harris Chain tournament, but lost ground with a 54th-place finish at Lake Chickamauga and a 26th-place finish on the St. Lawrence.

Lane has consistently flirted with the AOY Top 10 over the past five years, finishing ninth in 2019.

Lucas won the Elite Series AOY in 2017 after a summer in which he said “It felt like every decision I made was the right one.” With a sixth-place finish at the St. Lawrence in June, Lucas continued a streak of excellence on major smallmouth fisheries (he won at Sturgeon Bay and Lake Erie to finish out the 2020 season, and locked up his 2017 AOY with a second-place finish on a smallmouth fishery).

And About those Smallmouth Fisheries …

Lake Champlain and St. Clair are familiar fisheries to the Bass Pro Tour field, hosting multiple tour-level tournaments since the 1990s. DeFoe, Ehrler and Wheeler have competed on those two fisheries (at various levels) upwards of 30 times among them. Based strictly on previous results, none of the three frontrunners appear to have a significant advantage.