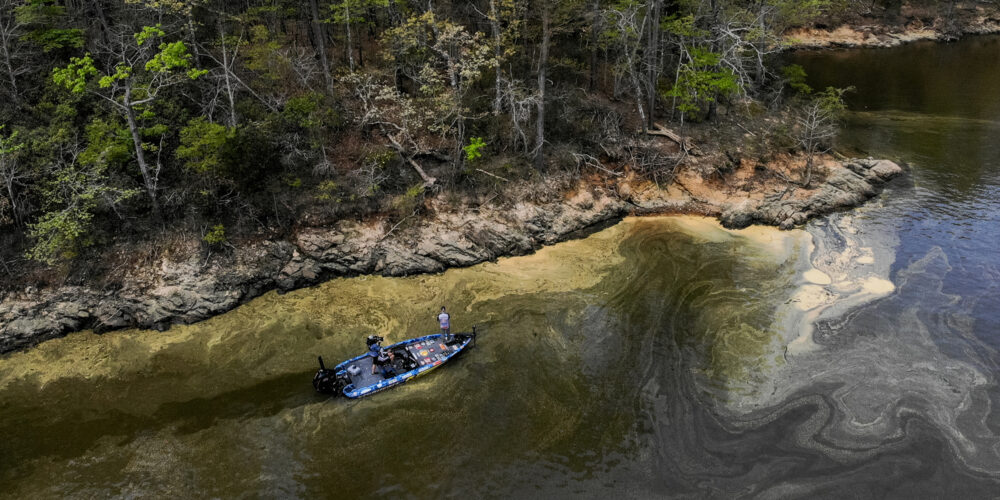 RALEIGH, N.C. – The kickoff to the General Tire Heavy Hitters Presented by Bass Pro Shops picked up right where the anglers left it in 2019. Big bass and plenty of them were the story for Group A on the first day on Jordan Lake, and multiple different patterns and lures accounted for the day’s catches. The one theme among the top anglers was fishing shallow for chunky North Carolina bass.

Here’s how the second- through fifth-place anglers caught them:

Duckett finds himself in a great position after the day, but still wonders what might have been. Lost fish were his biggest issue today, but he’s still happy with his finish.

“I lost a lot of big fish today, fish that I saw and know were big,” Duckett explained at the close of the event on the MLF NOW! live stream. “The good news is that I still had a good day. I feel pretty good about it when we come back out here (on Sunday).”

“I have an area with some rocky bank and am catching prespawn bass with a squarebill,” Duckett said. “When it gets still, I’m switching up. I was using a light weight with a Yamamoto Senko and pitching to laydowns.”

Alabama’s Chris Lane feels good about his spot in the standings and feels positive about his return trip to Jordan Lake for the second day in his qualifying round.

“Anytime you can be in contention to win, it’s a good thing,” Lane said. “I didn’t want to end up today in the middle of the pack, so this feels good.”

“The key was fishing very slow,” Lane said. “That’s really hard to do when the clock is ticking.”

Fresh off his Top-10 finish on Sam Rayburn for Stage One, Texas angler Jeff Sprague finds himself in the mix once again.

As was the case at Rayburn, pitching shallow cover is Sprague’s main program here in North Carolina.

“They were biting kind of funny today, but it’s always fun when you are catching them,” he said. “There’s a lot of pressure in my area, so I chose to downsize my bait to get bites. In my mind, it works better for me to get bites in a crowd.”

Tharp is widely recognized as one of the best in the Bass Pro Tour field at catching big bass with heavy line and a flipping stick. That’s precisely what he did on Friday, and he couldn’t be happier.

“Anytime I can keep a flippin’ stick in my hand and have a chance to win against these guys, I’m happy,” Tharp said. “The first period today was incredible, but it was a struggle after that.”

He’s flipping and pitching soft plastics, primarily the Zoom Z Craw. Nine of his 12 bass came in the first period, but he was able to tack on the final three bass of the day after that to remain in contention.