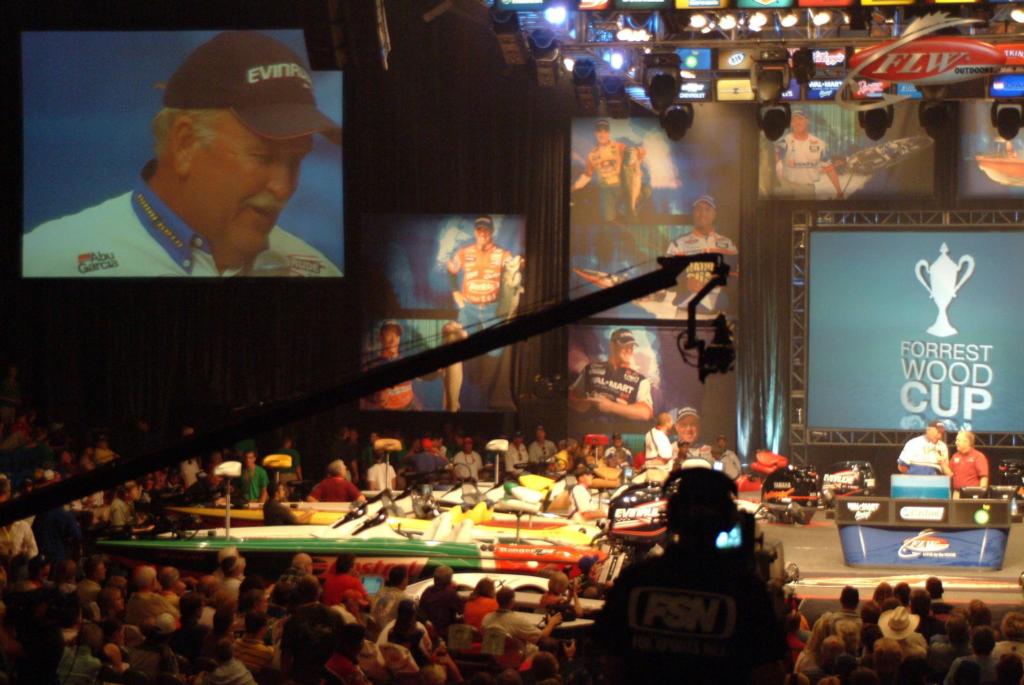 HOT SPRINGS, Ark. – Jack Wade of Knoxville, Tenn., crossed the stage with a five-bass limit weighing 16 pounds, 14 ounces to capture the lead on day two of the $2 million Forrest Wood Cup presented by Castrol on Lake Ouachita. With a total opening-round catch of 10 bass weighing 28 pounds, 1 ounce, Wade now holds a 1-pound, 9-ounce lead in the tournament featuring 81 pros and 81 co-anglers from across the United States and Japan.

“It’s exciting,” said Wade, who has notched three top-10 finishes in five seasons on the FLW Tour. “I’m fishing slow and thorough. I lost a 2-pounder, and then I caught a 5-pounder 20 feet from where I caught an 18-pound striper yesterday.”

Wade remained tight-lipped about the techniques he used to catch his fish, and for good reason. Making the top-10 cut earned him the right to battle for a $1 million first-place cash prize. This winning check will be the largest in the history of professional bass fishing and will make one of the final 10 pros in the Forrest Wood Cup an instant millionaire.

“Tomorrow I’m going out and going to catch all I can,” Wade said.

“I started out strong,” said Suggs, who has earned more than $182,000 in FLW Outdoors events and has the hometown Hot Springs crowd behind him. “The second cast I made I caught a really good fish. Then I thought it started going downhill because the next cast I broke one off. You can’t do that on these fish I’m fishing for. It’s bad enough I pull them all to the boat and it screws the hole up. And then to break one off – you can’t do that.”

Suggs said he is targeting fish suspended in deep trees, but the fish kept moving from tree to tree, and he had to move around to stay on fish.

“It was 8:30 this morning and I had enough to make the cut,” Suggs said. “I backed off for a while but then got nervous later in the day.

“I feel pretty good about it right now, but tomorrow is a whole new ball game,” Suggs added. “This lake has humbled me many times.”

Hudson caught two fish Thursday on the drop-shot rig and then switched to a big worm to try to boat a large fish. The worm produced his other two keepers. Hudson said he caught a total of seven fish throughout the course of the day.

Sanchez is the first woman in FLW Tour history to advance to the top 10 in the Forrest Wood Cup.

Forrest Wood Cup contenders will launch at 7 each morning from Brady Mountain Resort located at 4120 Brady Mountain Road in Royal, Ark., and daily weigh-ins will be held at Summit Arena located at 134 Convention Blvd. in Hot Springs each afternoon at 5. The Forrest Wood Cup Family Fun Zone and Outdoor Show – featuring more than 140 exhibits, fishing seminars by Forrest L. Wood and other bass-fishing legends, and free daily giveaways – will be open 11 a.m. to 7 p.m. Saturday and Sunday at the Hot Springs Convention Center.

Taping for the nationwide cable show, which airs weeknights at 10:30 p.m., will precede the tournament’s day-three weigh-in and crowning of the co-angler champion. Spectators could possibly make an appearance on the show as well, so you won’t want to miss this opportunity. Admission to the Forrest Wood Cup and “Best Damn Sports Show Period” taping is free.

Also, multi-platinum recording artist Tracy Byrd will perform a free concert, presented by US 97-FM, on the main stage at Summit Arena on Sunday at 4 p.m., just before the start of the final weigh-in.

Coverage of the Forrest Wood Cup will be broadcast to 81 million FSN (Fox Sports Net) subscribers in the United States Sept. 23 and Sept. 30 as part of the “FLW Outdoors” television program. “FLW Outdoors” airs Sunday mornings at 11 Eastern time. “FLW Outdoors” is also broadcast in Canada on WFN (World Fishing Network) and to more than 429 million households in the United Kingdom, Europe, Russia, Australia, Africa, Asia, and the Middle East through Matchroom Sport, making it the most widely distributed fishing program in the world. Additionally, FLW Outdoors is proud to provide tournament coverage to more than 800,000 servicemembers stationed around the world in 177 countries and aboard Navy ships through broadcasts on the American Forces Network.