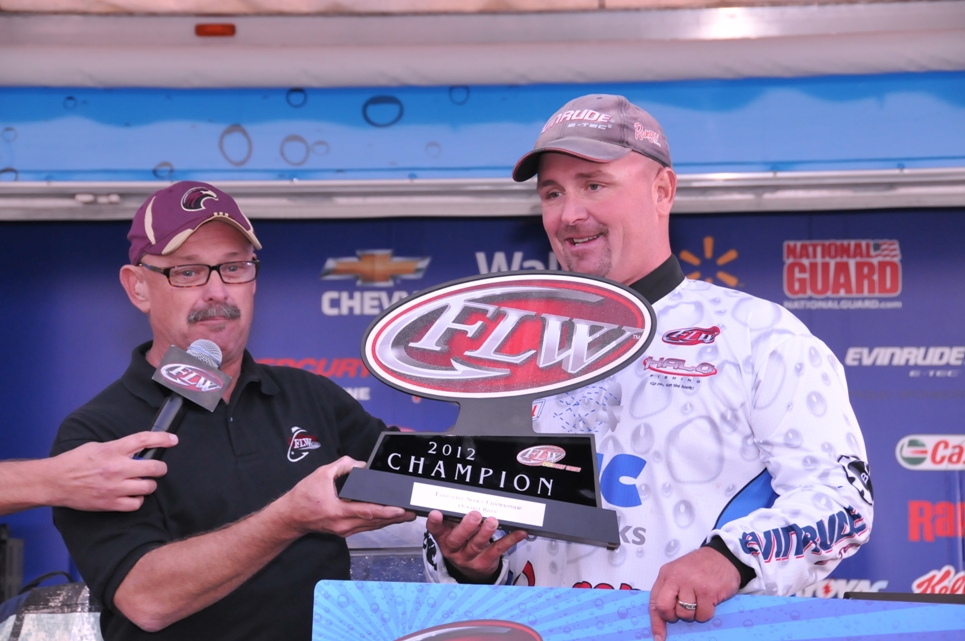 MONROE, La. – For the second time in his career and for the first time in FLW history pro Koby Kreiger won the EverStart Championship presented by Castrol on the Ouachita River Sunday with a five bass limit that weighed 9 pounds, 5 ounces. Kreiger of Okeechobee, Fla., had a four-day total of 20 bass that weighed 38 pounds, 5 ounces that earned him $50,000 plus a Ranger Z518 with an Evinrude or Mercury outboard motor and a berth in the 2013 Forrest Wood Cup. Kreiger, who won his first EverStart Championship in 2002 on Lake Martin in Alexandria City, Ala., beat second place Kent Ware of Wadmalaw Island, S.C., by 3 pounds, 15 ounces.

“It took a lot of hard work to get here,” said Kreiger. “I was predominantly fishing the river for as many bites as I could get, it was tough catching anything big. I tried fishing the bayous a little bit but the quantity of bites was not there and knew I would be better off on the main river.

“On the last day of practice my partner and I headed towards the Columbia Lock,” Kreiger continued. “You could see the shad on just about any piece of wood. When I figured that pattern out I pretty much had my game plan. I used War Eagle spinnerbaits, CP1 or CP2 crankbaits and a Mini-Frenzy umbrella rig to catch all my fish this week. The river was about 50-feet deep where I was fishing and the bass were suspending in about 7- or 8-feet of water.

“Making next year’s Forrest Wood Cup definitely takes a lot of pressure off,” Kreiger went on say. “It’s a big feat; however, I won’t fish any differently than I normally would during the season.”

The EverStart Series consists of five divisions – Central, Northern, Southeast, Texas and Western. Each division consists of four tournaments where competitors earn valuable points to help them qualify for the EverStart Championship. The top 40 pro and co-anglers from each respective division qualified for this event. Pros were competing for a top award of $50,000 plus a Ranger Z518 with a 200-horsepower Evinrude or Mercury outboard if Ranger Cup guidelines were met. Co-anglers were fishing for a top award consisting of a Ranger Z117 with 90-horsepower Evinrude or Mercury outboard and $5,000 if Ranger Cup guidelines were met. The EverStart Pro and Co-Champion also earned a berth in the 2013 Forrest Wood Cup being held on the Red River in Shreveport-Bossier City, La., Aug. 15-18.

The EverStart Championship which was held on the Ouachita River was hosted by the Monroe/West Monroe Convention & Visitors Bureau and was the final EverStart Series tournament of the 2012 season. The EverStart Series will kick-off the 2013 season again when the Southeast Division visits Lake Okeechobee in Okeechobee, Fla., Jan. 10-12.

Coverage of the EverStart Championship will be broadcast in high-definition (HD) on NBC Sports Network when “FLW” airs Jan. 6, 2013, from 1 to 2 p.m. ET. “FLW” is hosted by Jason Harper and is broadcast to more than 559 million households worldwide, making it the most widely distributed weekly outdoors-sports television show in the world.