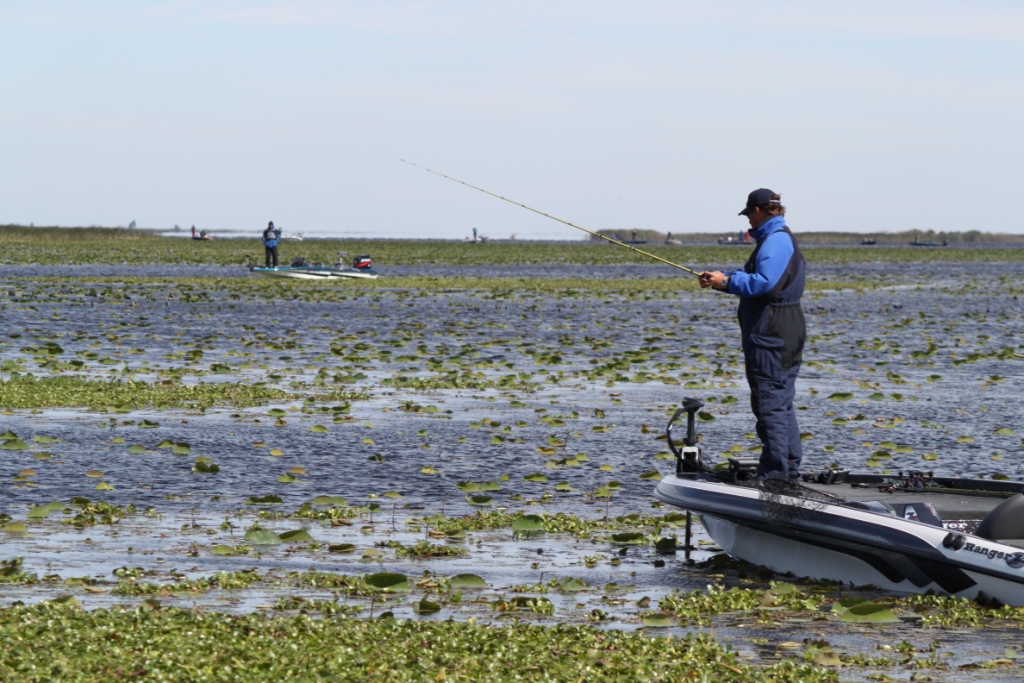 “This is going to be a very fun tournament,” said Evinrude pro Scott Martin of Clewiston, Fla., the 2011 Forrest Wood Cup Champion who has five top-10 finishes on his home waters of Lake Okeechobee. “Water levels on Okeechobee are a lot higher this year, and the college anglers are going to be able to fish wherever they want to. There is so much more fishable water now; it’s really pretty amazing.

“The big fish are starting to bite,” Martin continued. “The water has been up long enough that the fish are starting to settle in and move into the spawning phase. It’s getting better and better every day, but the big spawn hasn’t happened yet. The high water slowed them down from coming in on time, but they’re getting on track right now. By tournament time it should be a good bite.”

When asked what baits would be popular in this event, Martin suggested that the majority of anglers would be flipping creature-style baits or throwing swimbaits.

“Any time you are fishing Lake Okeechobee, you’re focusing your efforts on 3 to 6 feet of water,” Martin said. “That will hold true again this year. I’d be flipping a Bruiser Baits Intruder or throwing a Bruiser Baits Super Swimmer.”

Martin also had some tips for college anglers who may not have much experience on Lake Okeechobee.

“Bring big enough rods,” he said. “That’s a mistake so many people make here. They bring tackle down here that is not set up for the battle they are about to get into. During the tournament, pick an area and really concentrate on that spot. You don’t have to run all over the place to win this tournament.”

Martin predicted that the winning team will bring about 20 pounds to the scales.

Schools competing in the Lake Okeechobee tournament, which is hosted by the Okeechobee County Tourism Development Council, include:

Jacksonville State University – Colby Smith and Justin Buckles, both of Jacksonville, Ala.

Mississippi College – Will Hedgepeth and Grant Phillips, both of Clinton, Miss.

State College of Florida – Re Durso and Jarrad Albritton, both of Sarasota, Fla.

University of Alabama – Logan Johnson, Jasper, Ala., and Keith Kirkley, Northport, Ala.

University of Alabama-Birmingham – Matt Lipscomb, Springville, Ala., and Gregory Cain, Trafford, Ala.

University of Montevallo – Joseph Handley, Hueytown, Ala., and Joseph Fuller, Brierfield, Ala.

FLW College Fishing teams compete in four qualifying events in one of five conferences – Central, Northern, Southern, Southeastern and Western. The top fifteen teams from each regular-season tournament will qualify for one of five conference invitational tournaments. The top ten teams from each conference invitational tournament will advance to the 2014 FLW College Fishing National Championship.

FLW is the industry’s premier tournament-fishing organization, providing unparalleled fishing resources and entertainment to our sponsors, fans and host communities. FLW is offering anglers of all skill levels the opportunity to compete for millions in prize money nationwide in 2013 over the course of 231 tournaments across five tournament circuits, four of which provide an avenue to the sport’s richest payday and most coveted championship trophy – the Forrest Wood Cup. FLW is committed to providing a lifestyle experience that is the “Best in Fishing, On and Off the Water,” through a variety of platforms including tournaments, outdoor expos and FLW Fantasy Fishing. For more information about FLW and FLW Fantasy Fishing, browse FLWOutdoors.com or visit FantasyFishing.com and look for FLW on Twitter, Facebook, Pinterest and YouTube.