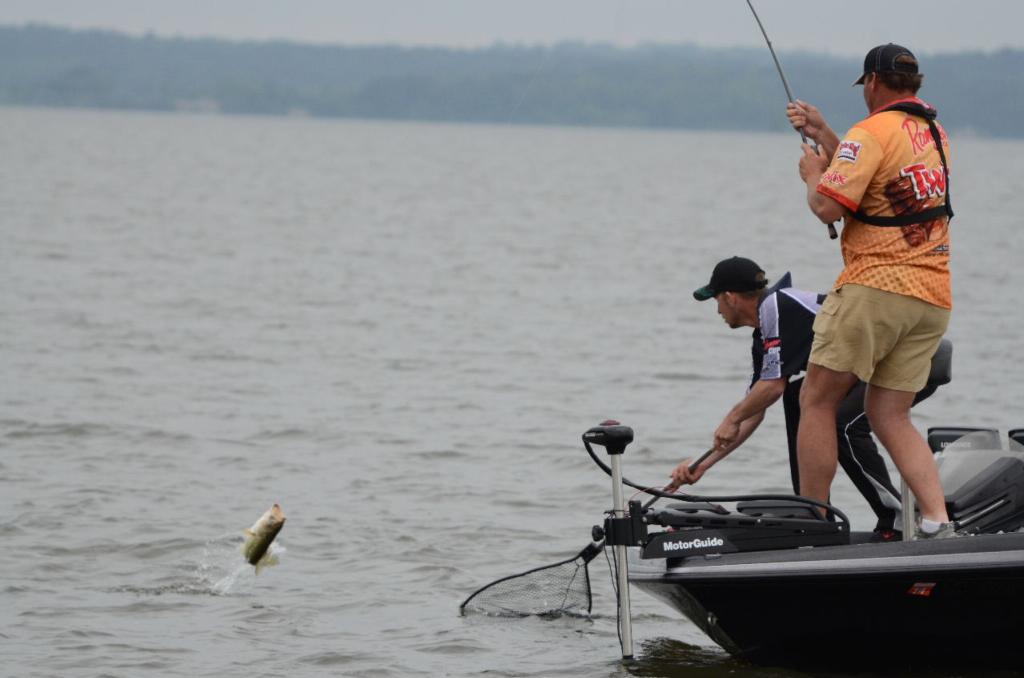 Haynes hurries to get the fish to the boat so he can cast back at his school. Photo by Kyle Wood. Angler: Randy Haynes.
May 18, 2013 • MLF • Press Releases

EUFAULA, Ala. – Pro Randy Haynes of Counce, Tenn., brought the largest stringer of the day to the scales Saturday, an impressive five-bass limit of 22 pounds, 2 ounces, to take the lead after day three of the Walmart FLW Tour at Lake Eufaula presented by Straight Talk Wireless. Haynes now enters the fourth and final day of competition as the No. 1 seed in the event featuring the world’s best bass-fishing anglers casting for the top cash award of up to $125,000.

Haynes has brought a three-day total of 15 bass weighing 57 pounds even to the scales, which gives him a commanding 8-pound, 7-ounce lead over Straight Talk Wireless pro J.T. Kenney of Palm Bay, Fla., who caught five bass today weighing 14 pounds, 3 ounces. Kenney has weighed in 15 bass totaling 48 pounds, 9 ounces in his three days of competition.

“It was different out there for me today,” said Haynes, who won the FLW EverStart series tournament just two weeks ago on Pickwick Lake. “Some of my holes that I had been fishing dried up, but I caught a couple in some new places today. I’m lucky that the bites that I had today were better bites. I hadn’t caught one over 4 pounds this week, but I weighed in three over 4 pounds today.”

Haynes, known widely for his ledge-fishing prowess, is fishing his style in this event and targeting the off-shore ledges using a wide arsenal of baits.

“I only have five or six different areas that I make sure that I always hit,” Haynes said. “I’m throwing several different baits, but I’ve got a couple of them that I’m really dialed in on.”

Haynes said that he would like his baits to remain a secret heading in to the final day of competition, but would discuss the specifics after the tournament.

“My weights are going up, but my numbers are going down,” Haynes continued. “I only managed seven keepers today, when I had 20 to 25 on Thursday and 10 to 12 yesterday. It’s getting to be slim pickings.

“I’m passed the point of tired,” Haynes went on to say. “I’ve got to get on the phone tonight and call in to work and take care of business back home. Then, I’m going to rig a few rods and get a couple of baits ready. You never know when things could fall apart or not go your way, but I’m not going to worry too much about tomorrow. I’m so tired right now that I’m sure that I am going to sleep just fine tonight.”

The top 10 pros advancing to the final day of competition on Lake Eufaula are:

“I never slowed down for all three days,” said New, who earned the first victory of his career. “Practice here was crazy tough, and I wasn’t real confident coming into this event. You never want to say that you don’t have confidence in yourself, but I was in a slump. I was really upset after my finish at Beaver. It feels good to redeem myself.”

New said that most of his fish that he caught this week came fishing a Charlie’s Worms finesse worm on a shaky-head rig, throwing a Carolina-rigged Charlie’s Worms Salt Bang-O and a Brian’s Bees crankbait.

Overall there were 21 bass weighing 28 pounds, 10 ounces caught by co-anglers Saturday. No co-angler was able to boat a five-bass limit.

In addition to the top award of $25,000, co-anglers were also fishing this week for valuable points that could help them qualify for the 2013 Forrest Wood Cup presented by Walmart. The top 35 co-anglers in the point standings from the six events on the 2013 Walmart FLW Tour will qualify.

The top 10 pros will take off from Lakepoint Resort State Park located at 104 Lakepoint Drive in Eufaula at 6:30 a.m. on Sunday. Sunday’s final weigh-in will be held at the Walmart located at 3176 S. Eufaula Ave. in Eufaula beginning at 4 p.m.

Fans will also be treated to the FLW Outdoors Expo at Walmart on Sunday from noon to 4 p.m. prior to the final weigh-ins. The Expo includes Ranger boat simulators, the opportunity to interact with professional anglers, enjoy interactive games, activities and giveaways provided by sponsors, and fans can learn more about the sport of fishing and other outdoor activities. All activities are free and open to the public.

Coverage of the Lake Eufaula tournament will be broadcast in high-definition (HD) on NBC Sports Network when “FLW” airs June 23 from 11 a.m.-12 p.m. ET. The Emmy-nominated “FLW” television show is hosted by Jason Harper and is broadcast to more than 564 million households worldwide, making it the most widely distributed weekly outdoors-sports television show in the world.