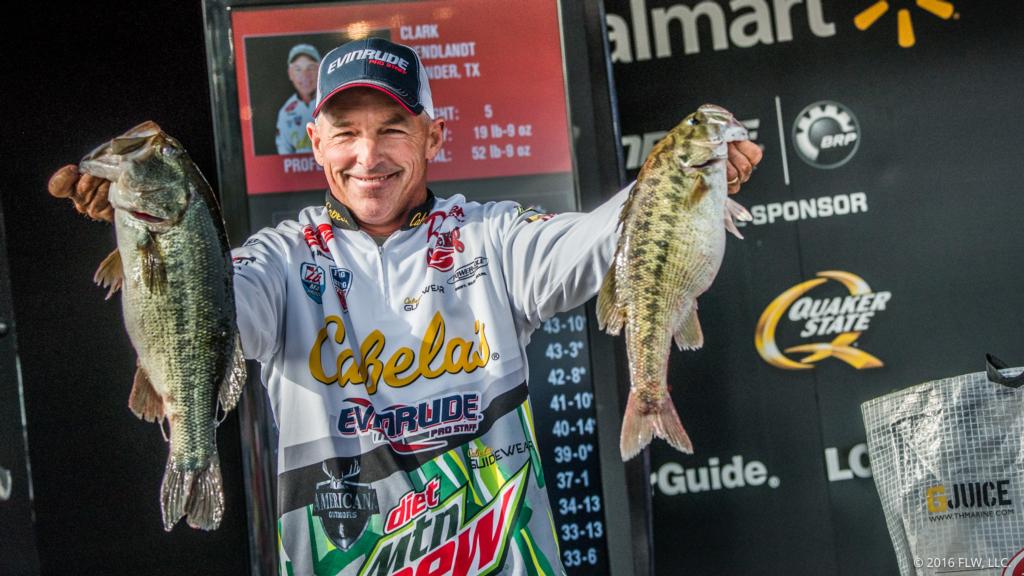 ANDERSON, S.C. – Texas pro Clark Wendlandt, brought a five-bass limit to the scale weighing 19 pounds, 9 ounces Saturday to take a 1-pound, 5-ounce lead into the final day of the Walmart FLW Tour at Lake Hartwell presented by Evinrude. Wendlandt’s three-day total of 52 pounds, 9 ounces make him the No. 1 seed on championship Sunday as the field is now cut to 10 in the four-day competition that features 168 of the world’s best anglers competing for a top cash award of up to $125,000.

Right behind Wendlandt in second place is John Cox of Debary, Florida, the day two leader, who brought in a five-bass limit weighing 14-3 Saturday for a three-day total of 15 bass worth 51-4.

“The lake is really fishing well out there right now, and I’ve got a lot of momentum going,” said Wendlandt, a three-time FLW Angler of the Year. “I love fishing when bass quickly come to the bank. They’ve mostly been deeper this week, and that’s where I’ve struggled, but the Lord blessed me today with how fast they were coming up shallow.”

Wendlandt said he focused on nearly 20 spawning pockets and adjusted his technique according to the type of structure and cover he encountered. He said he was primarily in clear water and caught seven keepers over the course of his day.

“For the most part, I’m running new water,” said Wendlandt. “I’ll hit a dock if it’s there, cast ahead into the pocket, or stop and go after a sight-fish if I see a good one. To me, finding new water is the only way that you can win. You can’t go in where there’s been a lot of boat traffic. There just won’t be any new fish.”

“I lost one that was easily over six pounds, it was a giant,” said Wendlandt. “The great thing about this lake is that there are a lot of bass in places where nobody has been yet.”

The 20-year Tour veteran went on to say that finding new fish has been crucial to his success.

“The guys that win find new fish every day and that’s what I’ve been doing,” said Wendlandt. “I’ve got to go out there and find some new ones tomorrow and do my best to make the right decisions with the pressure that will be there.”

The top 10 pros advancing to the final day of competition on Lake Hartwell are:

Overall there were 100 bass weighing 268 pounds, 6 ounces caught by 20 pros Saturday. All 20 of the day three contenders caught five-bass limits.

Chuck Kavros of Grass Valley, California, won the co-angler division and $20,000 Friday with a two-day total of 10 bass weighing 22 pounds, 2 ounces, followed by Anthony Goggins of Auburn, Alabama, who finished in second place with 10 bass weighing 21 pounds, 9 ounces worth $7,500.

Anglers will take off Sunday at Green Pond Landing located at 470 Green Pond Road in Anderson at 7:30 a.m. Sunday’s final weigh-in will begin at 4 p.m.

Fans will also be treated to the FLW Expo Sunday from noon to 4 p.m. at Green Pond Landing prior to the final weigh-in. The Expo includes interactive games, activities and giveaways provided by FLW sponsors, and the opportunity to interact with professional anglers to learn more about the sport of fishing and other outdoor activities. All activities are free and open to the public.

The tournament is hosted by the Anderson Convention & Visitors Bureau.