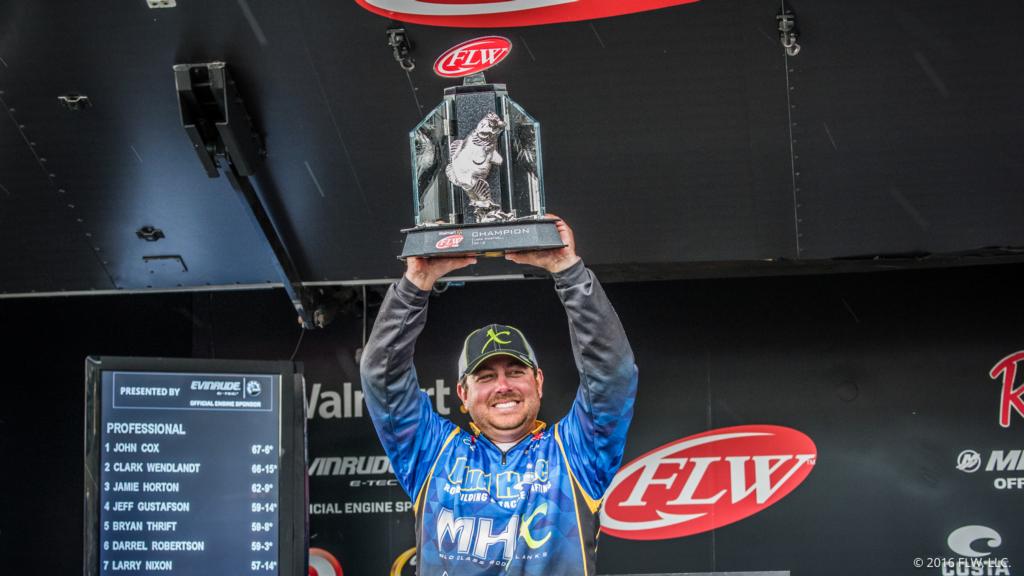 “It feels absolutely incredible to win this event,” said Cox, who now leads the 2016 FLW Angler of the Year race. “I haven’t won a Tour event in five years. Everything just came together for me this week.”

Cox said he spent the first three days of the tournament scouring nearly 70 miles of shoreline in search of spawning bass. He said his most productive baits were a wacky-rigged, watermelon-seed-colored Yamamoto Senko and Zoom Trick Worm.

“I ran to as many pockets as I could and caught most of my stringers off of beds,” said Cox. “My biggest bass of the tournament, a 6-pound, 11-ouncer, actually came off of a dock. It was crazy because I caught that one as I was targeting a 3-pounder.”

On day four, Cox said he decided to concentrate on a ¼-mile stretch of dirty water near Seneca that he called ”the pond”. He said he rotated between a black and blue jig and a Z-Man ChatterBait in a variety of cover and ended up boating seven keepers.

“I put my head down and got to work,” said Cox. “I threw to various pieces of wood and some rocks, basically anything on the bank. Every 200 yards I’d get a bite. I ended up catching each stringer fish from a different piece of cover. It’s amazing that I could spend three days running for miles sight-fishing, and then all of a sudden do so well in a such a small area.”

The Florida pro said that his decision to stay in the pond ultimately got him the win.

“Every time I tried to leave the area, I’d catch one,” said Cox. “I ended up being in there all day. It worked out perfectly.”

Overall there were 50 bass weighing 130 pounds, 3 ounces caught by 10 pros Saturday. All 10 of the day four contenders caught five-bass limits.

Chuck Kavros of Grass Valley, California, won the co-angler division and $20,000 Friday with a two-day total of 10 bass weighing 22 pounds, 2 ounces, followed by Anthony Goggins of Auburn, Alabama, who finished in second place with 10 bass weighing 21 pounds, 9 ounces worth $7,500.

In addition to casting for top awards of up to $125,000 cash in the pro division and up to $25,000 cash in the co-angler division, anglers are also competing for valuable points in hopes of qualifying for the 2016 Forrest Wood Cup, the world championship of bass fishing. The 2016 Forrest Wood Cup will be in Huntsville, Alabama, Aug. 4-7 on Wheeler Lake.