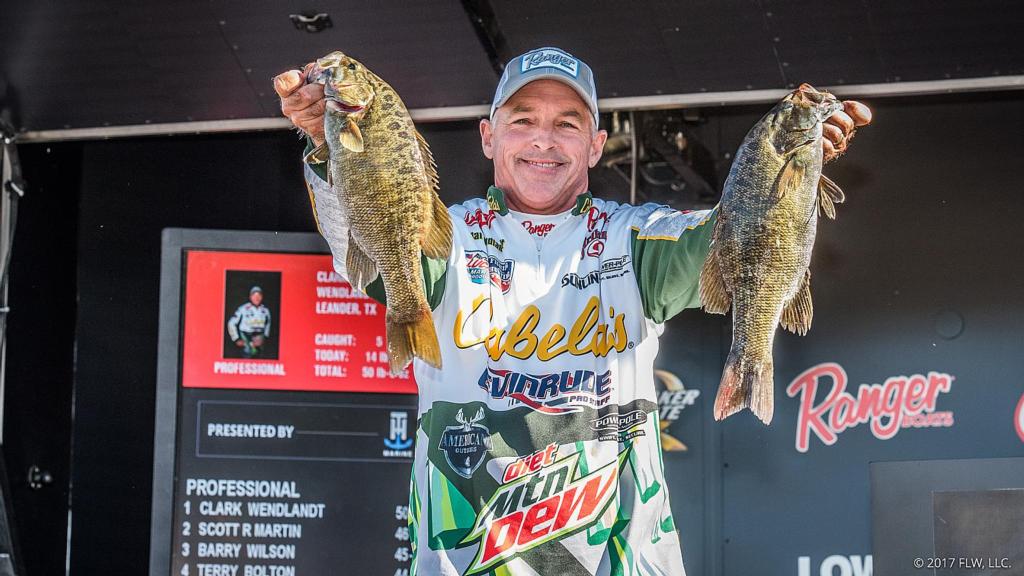 SOMERSET, Ky. – Clark Wendlandt of Leander, Texas, padded his lead Saturday at the FLW Tour at Lake Cumberland presented by T-H Marine after bringing a five-bass limit totaling 14 pounds, 10 ounces to the weigh-in stage. Wendlandt’s three-day cumulative total of 15 bass weighing 50 pounds even is enough for him to hold the No. 1 seed heading into championship Sunday when the final 10 pros will cast for a top cash award of up to $125,000.

“It was a struggle out there today, I only caught six keepers,” said Wendlandt, a 17-time Forrest Wood Cup qualifier who has amassed more than $2 million in earnings in FLW competition. “I’m targeting smallmouth and had a good day in terms of the amount I caught, but there were a lot of short fish in the 17-inch range. Catching those big ones over 18 inches is hard right now.

“I think I have the best chance to win targeting smallmouth,” continued Wendlandt. “The fish I’m on are mostly prespawn. A few may be spawning, and sight-fishing may play a role tomorrow but it hasn’t for me yet. I think I saw one on a bed today, but it left. If I see one tomorrow, I’ll go after it.”

Wendlandt’s limit Saturday was made up of multiple species – four smallmouth and one largemouth bass.

“I have two main patterns and I’m rotating between two different baits,” said Wendlandt. “I’m mostly in creeks, but I’ve got a few main-river places I’m hitting as well. I probably moved 15 to 20 times today.”

Wendlandt said he plans on spending his final day on the water fishing like he has the entire event – loose.

“When you plan your day out too much it stifles any creativity and intuition you may have out there,” said Wendlandt. “This lake is big, and I don’t know where I’m pulling up to. I’m just going to fish and when I think it’s time to move, I’ll move. I think there’s something to be said of anglers who have the ability to adjust no matter what their original plan was.”

The top 10 pros advancing to the final day of competition on Lake Cumberland are:

Pro Johnny McCombs had his day-two weight disqualified after he was found to be in violation of FLW rule No. 14 which states that contestants may fish anywhere on tournament waters available to the public and accessible by boat except areas posted or otherwise designated as “off-limits,” “no boats,” “keep out,” “restricted,” “no trespassing” or “no fishing” (or similar language or markings intended to restrict public access) by FLW. McCombs’ total of five bass weighing 9 pounds, 15 ounces, was good for 144th place.

Prior to the weigh-in Sunday, fans are encouraged to experience the free Family Fishing Expo at General Burnside Island State Park from noon to 4 p.m. The Expo is a unique opportunity for fishing fans to meet their favorite anglers, enjoy interactive games, activities and giveaways provided by FLW sponsors, and learn more about the sport of fishing and other outdoor activities.

The total purse for the FLW Tour at Lake Cumberland presented by T-H Marine is more than $800,000, including $10,000 through 50th place in the Pro Division. The event is hosted by the Somerset Tourist and Convention Commission.