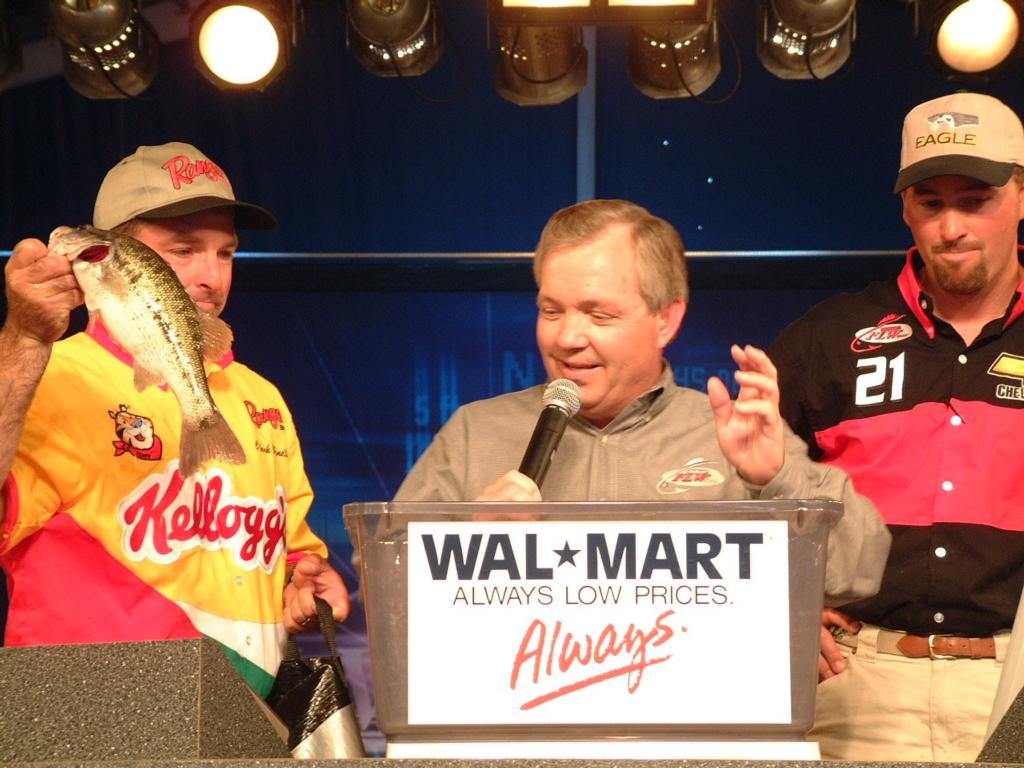 Repeat offender … Clark Wendlandt of Cedar Park, Texas, is the only angler ever to win the Wal-Mart Open twice. He also won this event – and $160,000 – the first time in 1999. This is not his first repeat accomplishment, however. Any bass fishing fan who eats Kellogg’s Corn Flakes can see Wendlandt sitting on their kitchen table. He was honored with a box bearing his image when he won last year’s Land O’Lakes Angler of the Year title. It was the second time he has won Angler of the Year, which he did for the first time in 1997. He is also the only person ever to have accomplished that feat. For the record, the only other angler to have repeat victories at one FLW tournament site is one of this week’s semifinalists, Gary Klein of Weatherford, Texas, who won on the Mississippi River at Memphis in 1999 and 2000.

A can’t-lose proposition … Even if Wendlandt hadn’t succeeded today, the Wal-Mart Open would have seen its first repeat winner. In the final-round weigh-in shootout, it came down to Gerald Swindle of Jasper, Ala., and Wendlandt, both former winners of this event. Swindle was the Wal-Mart Open champion in 1998. Swindle had weighed all five of his fish and established the lead with 10 pounds, 11 ounces. Wendlandt, who had already weighed in three of his bass, was the only angler with fish left. He needed just over 3 pounds to take it. He brought two fish weighing over 4 pounds to the scale and clinched the win. Said Swindle, “Anytime you lose to Clark Wendlandt, you’ve got nothing to be ashamed of. He’s one of the best sight fishermen there is. I’ll take second place behind this guy any day.”

The one that got away … It was no easy win for Wendlandt. He only beat Swindle by 14 ounces. The pressure showed on his face as he pulled up to the weigh-in tent at the Rogers Wal-Mart. One incident on the water today had him particularly distressed. “I lost a 4-pounder today that I thought cost me the tournament,” he said afterward. Video replay of his fight with the fish shows just how much that fish meant to him at the time. When it broke off, he simply dropped his rod onto the boat deck, looked at the camera like he’d just been shot and said, “I don’t even know what just happened.” That fish bothered him during the ride all the way to weigh-in. “As I thought about what might happen, I almost started crying,” he admitted.

War of attrition … Probably the biggest reason Wesley Strader of Spring City, Tenn., finished in fifth place today was because he was the only competitor not able to catch a five-fish limit. He caught three bass weighing 6 pounds, 15 ounces. Certainly Strader would have preferred to catch a limit and increase his chances to win the tournament, but he won a smaller battle on Beaver Lake today – a personal battle that likely diminished his shot at victory. It had to do with the biggest bass in his bag. “That fish took me two hours to catch,” he explained. He hooked it shortly after spotting it, but it came off. Then, shrugging off all other fish, he proceeded to work on inducing the big one to bite again for the next two hours. And it did, and it ended up anchoring his three-fish stringer. “It wasn’t a matter of winning or losing on that fish,” he said. “It was a matter of principle. It made me mad.”

A sight better unseen? … Fourth-place finisher Mark Pack of Mineola, Texas, said he saw probably 18 pounds of bass while sight fishing today. Unfortunately, he could only catch 7 pounds, 11 ounces of them. “They were new fish and I just couldn’t get them to bite,” he said.

And the awards go to … Strader won this week’s $500 Energizer Keeps on Going award for coming from the farthest back in the tournament to make the final round. He started day one in 34th place. … Swindle captured the Shop-Vac High Performance award for catching the most weight over the first two rounds. He weighed in 34 pounds, 13 ounces of bass in three days of fishing.

625,250: Amount, in dollars, of Clark Wendlandt’s career earnings on the FLW Tour after today’s victory. The $200,000 boost he received at this tournament moved him in front of David Fritts of Lexington, N.C., into second place on the tour’s all-time leading money-winners list. Only Ava, Mo., native Rick Clunn has more career earnings with $716,600.

13: Number of FLW career top-10 tournament appearances by Wendlandt, which ties Clunn for the record.

3: Number of FLW career wins by Wendlandt – Beaver Lake in 2001 and 1999, and Lake Murray in 2000. This also ties him with Clunn, who has three career victories, for second-place all-time. Fritts leads the career-wins category with four.

“Dear God, he’s losing weight!”
– An anxious Gerald Swindle, prompting FLW host Charlie Evans to hurry up and read the weight of one of his fish. Evans had to wait for the lively bass to settle down on the scale before he could read an accurate measurement.

“It sounds like a fish story, I know. Most fishermen lie. I don’t.”
– Third-place finisher Randy Howell, in jest, reinforcing his claim that he passed up “hundreds of fish” that he saw on the beds today so that he could focus on the big ones.