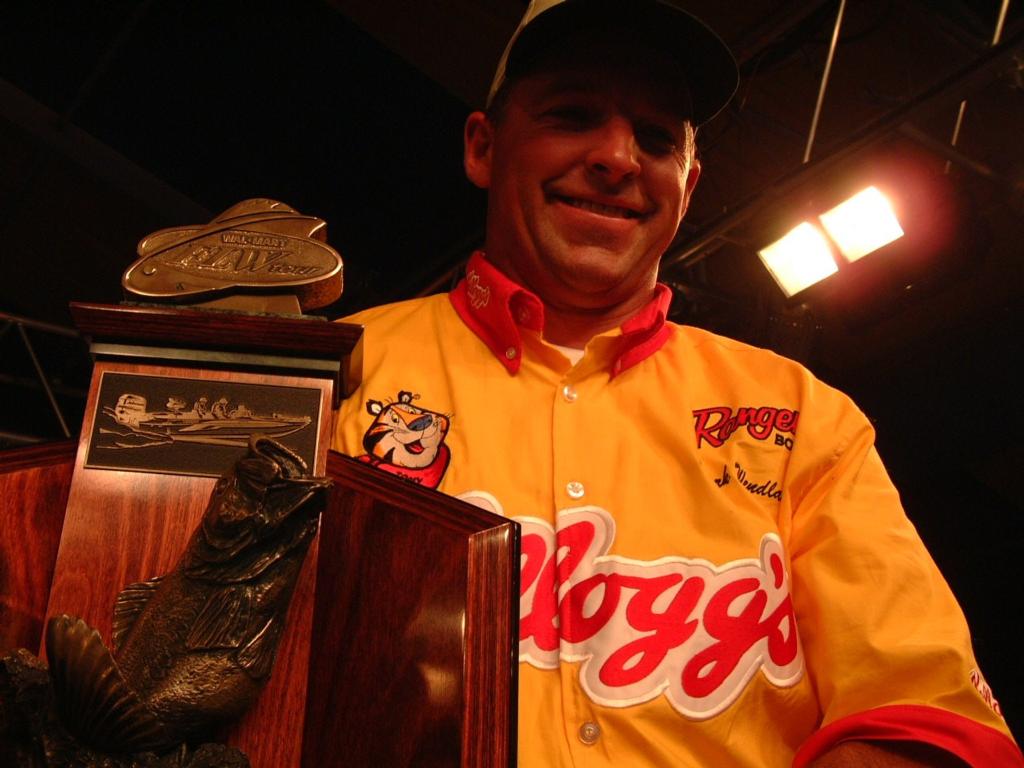 ROGERS, Ark. – As world famous boxing announcer Michael Buffer kicked off the final weigh-in with his inimitable version of “let’s get ready to rum-ble,” few knew that the contest before them would match the intrigue and slugging potential of a typical heavyweight showdown. But that’s exactly what happened. With all five anglers – some of the best sight fishermen in the country – going toe to toe and matching each other pound for pound throughout the afternoon, it became clear that the final outcome would be in doubt until the final minute.

Finally, with three anglers eliminated and Gerald Swindle of Warrior, Ala., clinging tenuously to the lead with 10 pounds, 11 ounces, Wendlandt walked to the weigh-in podium hoping to deliver the knockout punch. As the crowd watched in nervous anticipation, Wendlandt reached into his bag of tricks, hesitated, then produced the winning blow – a two-fish combination that tipped the scales at more than 4 pounds.

Just as Ali had done when it became clear that Foreman would not rise to his feet in the final round in Zaire, Wendlandt thrust his arms high into the air. The crowd exploded. Wendlandt was now victorious.

“I knew it was going to be a battle,” said the native of Cedar Park, Texas, while simultaneously serving notice that he had every intention of defending his 2000 Kellogg’s FLW Angler of the Year title. “I can’t tell you how happy I am. There are just certain places that give you a lot of confidence and Beaver Lake just happens to be one of them. But boy, I was really nervous.”

With the help of a Gambler tube bait and a world-class sight-fishing technique, Wendlandt managed a total catch of 11 pounds, 9 ounces – a feat good enough to capture one of the most lucrative tournament purses in the country, a $200,000 first-place prize. Wendlandt also recorded his second Wal-Mart Open victory of his career.

“It’s unbelievable. On my way to the weigh-in, as I thought about what may happen, I almost started crying,” said Wendlandt, who acknowledged that his nerves almost got the best of him several times during the day. “I lost a 4-pounder today and I told God, `please don’t let me lose the tournament because of this.’ I really feel fortunate.”

First prize swindled out from under him

Although Gerald Swindle lost the tournament championship, he said that he could take solace in the fact that he fished as hard as he could and gave it his best shot.

“Anytime you lose to Clark Wendlandt, you have nothing to be ashamed of,” said Swindle, who took home a nice consolation prize of $100,000. “I knew these guys were going to be tough to beat and I’ll take second place behind these fishermen any day. Maybe I’ll come back and win it next year.”

Swindle, who spent a large part of the day unsuccessfully tracking a 7-pound fish that would have easily won him the tournament, said it was not to be.

“I couldn’t make him bite and I just ran out of time,” he said. “But I learned a lot about sight fishing this year and I think it’s really going to help me in the future.”

Randy Howell of Trussville, Ala., took home third place with a catch of 8 pounds, 4 ounces. But like Swindle, Howell spent much of the day attempting to coax a large fish in his boat.

“I saw this 6-pounder and I tried for a long time to catch it. I just couldn’t get him to bite,” said Swindle, who took home $50,000 for his efforts. “I probably passed up hundreds of smaller bass – I know it sounds like a fish story, but it is the truth. It’s a big mind game out there. Do you stop and catch 1 1/2-pounders or do you just keep on looking for the big ones? It’s a tough decision.”

Despite coming up a few pounds short, Howell said he was happy with his performance.

“I had a great week,” said Howell, who acknowledged that he will use some of the prize money to help support his new child who is due in a few months. “It feels really good to be here and accomplish what I’ve accomplished.”

Mark Pack of Mineola, Texas, landed in fourth place with a total catch of 7 pounds, 11 ounces.

“I did see a lot of fish on the beds today, I just wasn’t able to catch them,” said Pack, who walked away with a $35,000 check. “But this tournament has been a great opportunity for me and I’ve had a lot of fun.”

Although Wesley Strader finished in fifth place, the native of Spring City, Tenn., said that he will remember this experience for a lifetime.

“I’ve accomplished two of my goals this week,” he said. “I qualified for my first FLW top 10 and my first FLW top five. I didn’t achieve my third goal – to win a tournament championship – but I’ve had a great time. I went for the win today and I’m not second guessing anything. I just came up a little bit short.”

Complete coverage of the Wal-Mart Open will be retelecast on ESPN on May 5 at 3:30 p.m. ET. FLW competition resumes May 16-19 at the Red River in Shreveport, La.