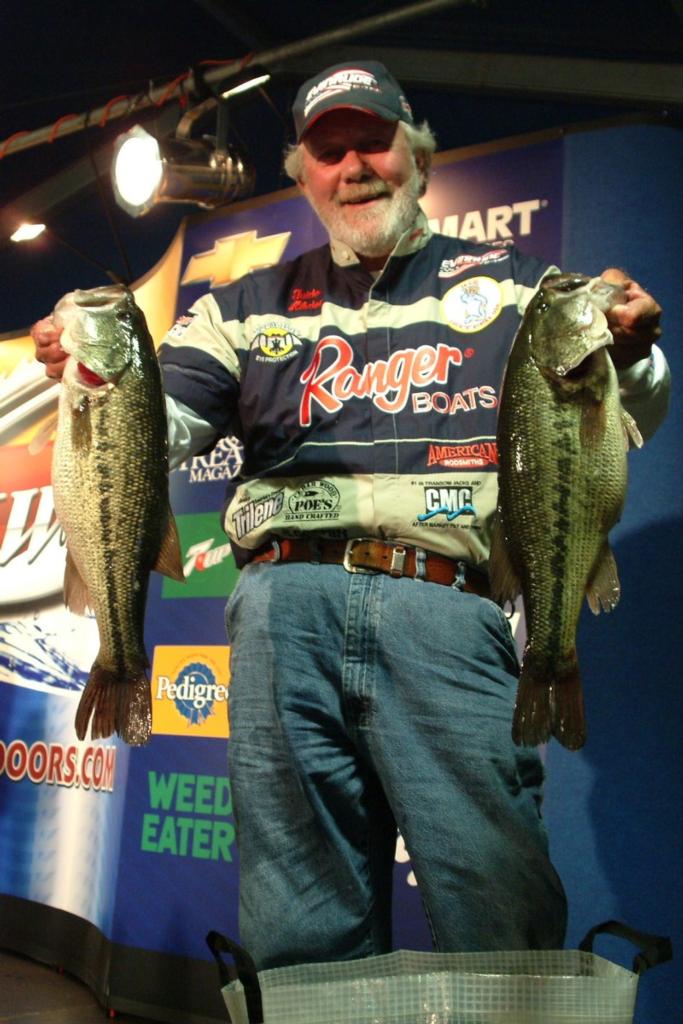 ROGERS, Ark. – It’s been four years since Guido Hibdon last made a pro-level top 10 and six years since he last did it at Beaver Lake. Wednesday, the legendary finesse fisherman from Gravois Mills, Mo., reminded people why he is one of the luminaries of the sport of bass fishing by taking an assertive lead in the Pro Division on opening day of the Wal-Mart Open.

“You know, I’ve been fishing tournaments since `77,” Hibdon joked. “That’s probably before a lot of these guys were even able to hold a fishing rod.”

In recent years, Guido Hibdon has been relegated to the role of cheerleader as he watched his son, Dion, make cut after cut on the FLW Tour. Since Guido’s last appearance atop the leaderboard at Beaver Lake in 1999, Dion has finished in the FLW top 10 no fewer than eight times, including a big victory at the 2000 championship.

But Wednesday was Guido’s day to shine – in no small part because the sun didn’t. Heavy cloud cover, cool temperatures and an assertive breeze at Beaver Lake kept a lot people from sight-fishing as hard as they would have liked. That left the door open for some of the pros, like Hibdon, who were targeting secondary points and deeper fish.

“It was probably the cloud cover as much as anything else that helped me out,” said Hibdon, who said he fished “downlake” and caught fish between 20 and 30 feet deep. “I kind of caught them all day long. I’m sorry to say it, but I’d like to see it snow tomorrow.”

Hibdon caught a couple of limits’ worth of largemouth bass and a slew of spotted bass, eventually culling out to four largemouths – including two 5-pounders – and one spot. Even in his own success, the elder Hibdon tipped his cap to his son, who designed the well-known crawfish-imitation bait he used Wednesday.

“I caught them on a melon-pepper-colored Lucky Strike Guido Bug, which is kind of a cross between green-pumpkin and watermelon,” he said. “Dion made the Guido Bug as a school project when he was 11 years old. It’s the ol’ reliable, but I hadn’t been using it so much lately. (My wife) Stella told me last night that, if I didn’t start throwing it again, she was going to kick my butt.”

As gratified as he was to be back on top of things, Hibdon was worried that he caught too many largemouths on day one and didn’t save enough for the rest of the week.

“I caught 10 or 12 largemouths, and that’s probably too many,” he said. “There’s not that many in this lake to go around. There are a whole lot of them in here that won’t bite at the right time, but you’re always trying to catch as big a bag as you possibly can.”

At 27 years old, Kindy is one of those who couldn’t hold a rod when Hibdon started fishing tournaments. In fact, he wasn’t even born yet.

But that matters little when you’re rolling like Kindy is. The pro from Benton, Ark., finished 10th at last month’s event at the Ouachita River and has established himself as one to watch here in his home state with a limit weighing 15 pounds, 2 ounces.

“I feel like I’m on cloud nine,” he said. “When you get on a roll, you’ve just got to keep fishing hard. You can’t ever coast, not against these guys.”

Kindy, too, avoided sight-fishing and caught his fish deeper. Fishing the main lake, he focused on secondary points and caught staging fish that haven’t yet moved up to spawn. At one point he caught two largemouths – his 5 1/2-pound kicker and a 3-pounder – off the same rock. He earned the $750 Snickers Big Bass Award for his 5-pound, 8-ounce largemouth.

“Oh, man, it couldn’t have worked out any better,” he said. “I’ve fished all these Ozark lakes a bunch, places like Greers Ferry and Table Rock, so I’m familiar with it.”

Kindy’s key bait was an original Storm Wiggle Wart, a plug that has been out of production for about four years, but one that he relies upon heavily.

“I caught more fish today than I caught anytime in practice,” said Robertson, known for his $600,000 victory at the 1999 Ranger M1. “I fished mostly at midlake. I caught some on a War Eagle spinnerbait, some sight-fishing and one on a fluke.”

Chris McCall of Jasper, Texas, claimed the fourth spot for the pros with a limit weighing 14 pounds, 11 ounces.

“I fished from here (Prairie Creek Marina) to just about all the way down to the dam,” said McCall, who caught the bulk of his bass on a jighead with a Gambler Sweebo shaky worm. “I was just covering a lot of water.”

Cody Bird returned to form at Beaver Lake by placing fifth on opening day with a limit weighing 14 pounds, 4 ounces. Since 1999 the pro from Granbury, Texas, has never finished worse than 18th place at the Wal-Mart Open.

“You know, Beaver’s been awfully good to me,” he said. “I grew up fishing a lake called Possum Kingdom near Granbury that is identical to this lake. It’s just like these clear lakes up here. You get a lot of bites here, which is what I like.”

Rounding out the top 10 pros on day one at Beaver Lake:

A lot of five-bass limits crossed the scale on day one, and weights are very tight throughout the field. The pros weighed in 135 limits, and just six pros failed to weigh in at least one fish.

Mike Hawks of Galax, Va., earned the top spot in the Co-angler Division with a five-bass catch of 10 pounds, 12 ounces.

Rounding out the top 10 co-anglers on day one at Beaver Lake:

Judy Israel of Clewiston, Fla., claimed the Snickers Big Bass Award and $500 in the Co-angler Division with a 5-pound, 13-ounce largemouth that she caught on a finesse worm. Israel gained national acclaim last year as the first and only woman to win an FLW Tour event.

Day two of FLW Tour competition at Beaver Lake begins as the full field of 200 boats takes off from Prairie Creek Marina at 7 a.m. Central time Thursday for the second half of the opening round. Following tomorrow’s action, both fields will be cut to the top 10 anglers apiece based on two-day total weight.