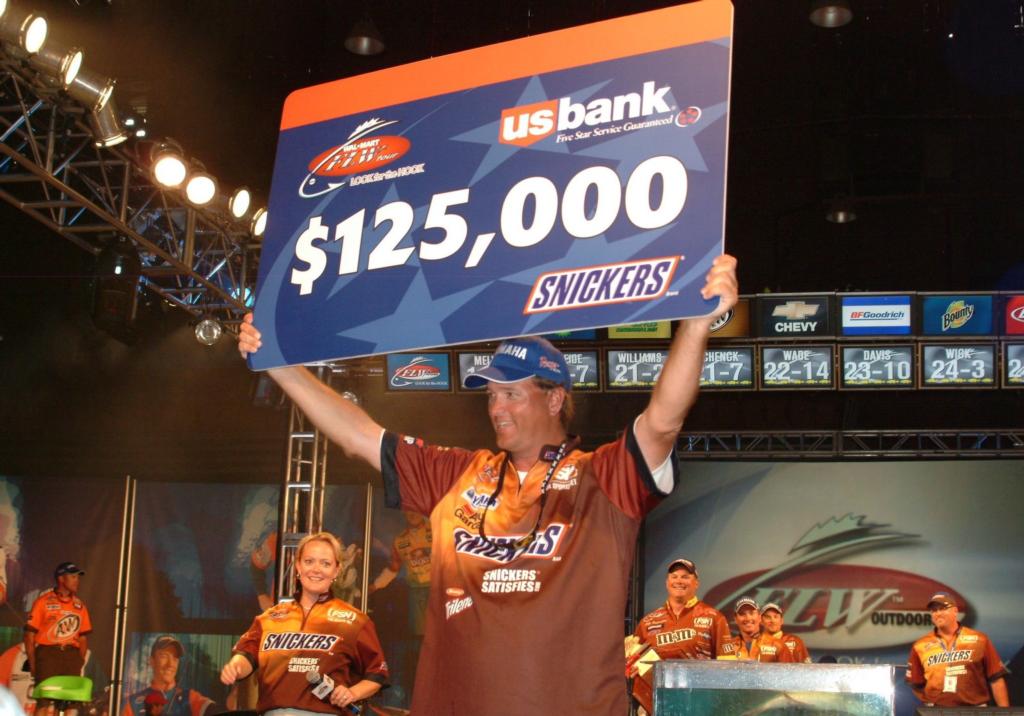 Baumgardner did so in striking fashion, catching 10 bass over the final two days that weighed 33 pounds, 5 ounces. His margin of victory was a whopping 6 pounds, 12 ounces. While other competitors wilted while targeting highly pressured bass, Baumgardner displayed incredible consistency.

Although he entered Sunday’s competition with a 1-pound lead, the smart money was probably still on Dudley, a pro with a fat wallet and a tremendous track record on the Potomac. But the mild-mannered veteran from Gastonia, N.C., never flinched. He stuck with his game plan and caught five bass that weighed 16 pounds, 14 ounces. 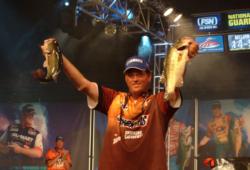 All of those bass came on the original Rad Lures ChatterBait, a lure that is taking professional fishing by storm. On day four, he caught one bass with a black-and-blue color scheme. The rest were caught on brown and green-pumpkin. The jig portion of the bait was a brown color he calls “Andy” after fellow tour pro Andy Montgomery of Blacksburg, S.C. Montgomery tied the bait’s skirt for him, and the body was tipped with a 4-inch green-pumpkin Speed Craw made by Zoom.

“It’s a bait I’ve been using the past couple years,” said the pro winner. “On these kinds of lakes and rivers where there’s grass, it works real good. It’s kind of like a spinnerbait that you can skip under docks.”

Baumgardner never really altered his pattern. During the two-day opening round, he would slow-roll his ChatterBait around lily pads and then move to the milfoil flats around 1 p.m. During the final round, he abandoned the pads and fished the grass exclusively. The winning area was located three miles south of Mattawoman Creek. Baumgardner described it as a classic postspawn area.

He caught a sum of 11 keepers on the final day. His livewell was empty at about 8:15 this morning until he hooked up his first fish, a 2 1/2-pounder. A half-hour later he experienced his first flurry, boating three keepers in approximately five minutes. These sporadic flurries continued for the duration of the day. 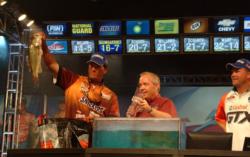 Baumgardner said he remained calm the last two days despite being so close to tasting victory.

“I get nervous the first two days. That’s when you can really bomb really bad. Once you make the top 10, all you’re trying to do then is win. To finally get that win is a great feeling. I’ve been wanting to win one of these forever. You think you’ve got it in you to win one, but you don’t know for sure until you do it.”

For eliminating 199 of the best bass anglers in the world, Baumgardner earned a $125,000 first-place purse. In addition, the Snickers Big Bass for the tournament paid a total of $1,750.

Dudley was confident coming into the final day, but he’s never one to predict his performances. In his own words, he fished well mechanically but was just off with his decision making.

“The timing of my moves wasn’t right,” said the FLW Outdoors all-time leading money winner. “I think I was 30 minutes late sometimes or 30 minutes too early.” 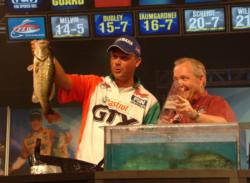 Dudley caught a great number of keepers, but they were not near the quality of Baumgardner’s. His five-bass limit on day four weighed 11 pounds, 2 ounces, giving him a final-round total weight of 26 pounds, 9 ounces.

The Castrol pro spent most of his time in the Mattawoman Creek area near Smallwood State Park. On day one, he primarily fished the Greenway Flats. He returned to that area for a quick stop today, but it was unproductive.

His key bait this week was a Zoom Baby Brush Hog in green-pumpkin color. Ironically, Dudley ran out of these baits, and it was Baumgardner who gave him three additional packs. Dudley credited his success to how he presented the bait.

“In rivers like this, you’ve got to make your bait present itself naturally.”

For his second-place finish, the Lynchburg, Va., pro earned $50,000 and surpassed Denny Brauer to claim the fourth spot on the all-time leading money winner’s list with a career-winnings total of $2,370,410. That total includes both his BASS earnings as well as his FLW Outdoors earnings.

“I still hate to lose. I don’t know what else to say. If I don’t win, in my opinion, I’ve lost. I hate to lose. Big money, little money, it doesn’t matter. You want to challenge me at picking four-leaf clovers? No matter what, I just want to win.”

Over the duration of the two-day final round, Spiderwire pro Bobby Lane caught an awful lot of fish. But like many others, he struggled to find the quality bites that were the staple of his opening round. 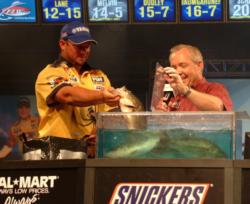 Lane mainly fished directly across from the ramp in Mattawoman Creek, burning very little gas the first two days. Sporadically, he would dip into Chicamuxen Creek, although that area was only productive on day one. He caught his fish by flipping thick mats with a Berkley Chigger Craw. On occasion, he would also pull out a Pop-R in search of a kicker bite up top.

Sunday morning, he saw a big bass jump nearby in his area. He immediately hopped on his trolling motor and whipped his Pop-R in the direction of the swirl. The result was his first fish, and the biggest bass of the day. That largemouth anchored an 11-pound, 13-ounce limit, which pushed his total to 24 pounds, 12 ounces.

“I just love fishing grass,” said the Lakeland, Fla., pro. “I can fish grass all day and not catch a fish, and I’ll still be happy.” 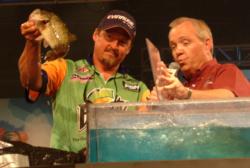 Wick fished two areas in a small creek that was located eight miles north of Smallwood State Park. Running north, the creek is located on the right-hand side of the river. On day four, all of his bass were caught on a 3/8-ounce Skinny Bear jig that was tipped with a Berkley Chigger Craw.

“It’s been a ball,” said the Star, Idaho, native. “I had an absolute blast. It was everything I thought it was going to be.”

Making his second top-10 appearance of the season, Mark Davis of Mount Ida, Ark., caught a limit of bass weighing 12 pounds, 1 ounce today to push his final-round total to 23-10, good for fifth place and $20,000. 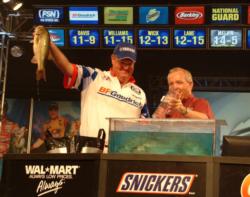 Davis experienced more success in the opening round when the weather was cloudy and cool. Those conditions allowed him to tap into a stellar topwater bite. That pattern dried up Friday, and Davis was forced to scrounge with a plastic worm.

“It was awesome when the cloud cover was here,” said the only angler to have won the BASS Angler of the Year and the Bassmaster Classic in the same season. “My fish were scattered, not schooled. If they had been schooled up, I possibly could have won the tournament.”

With only one FLW Tour qualifier remaining, Davis is beginning to set his sights on the 2007 Forrest Wood Cup on Lake Ouachita, his home water.

Rounding out the top 10 pro finishers in FLW Tour competition at the Potomac River:

The next and final FLW Tour qualifying event, the Chevy Open, is scheduled for the Detroit River in the Motor City, July 12-15.

Jay Yelas maintained his lead in the Land O’Lakes Angler of the Year race after five events. To date, Yelas has accumulated 898 points. Behind him is Shinichi Fukae, the 2004 AOY, with 872 points and Davis with 860 points.