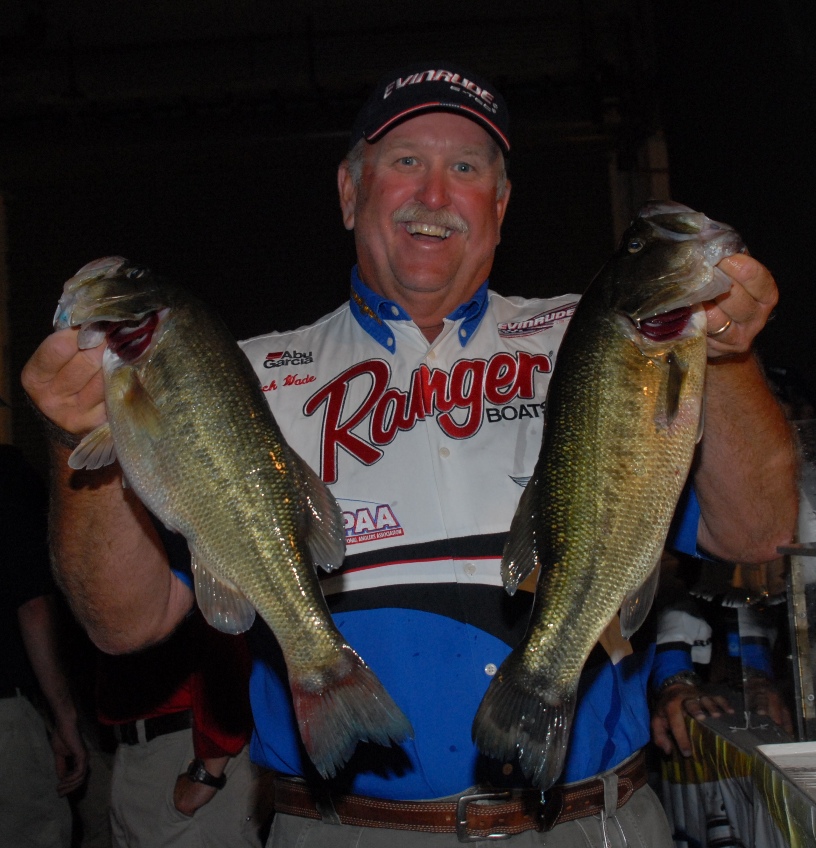 HOT SPRINGS, Ark. – On Sunday, Aug. 5, professional bass-fishing history will be made as one talented angler will win a million dollars at the 2007 Forrest Wood Cup.

When the top-10 cut was made at the Cup late Friday afternoon, all 10 anglers were registered Ranger owners, fully qualifying each pro to win the $1 million.

Weights will start from zero Saturday morning, meaning this event is essentially down to a two-day, 10-man tournament for seven figures.

The weight needed to make that coveted top-10 mark landed at 21 pounds, 3 ounces, a lot more than many expected going into the event.

Inside that cut is a list of Wal-Mart FLW Tour heavy hitters and past Forrest Wood Cup champions, including Castrol pros Darrel Robertson and David Dudley.

Currently on top of that talented stack of pros is Jack Wade of Knoxville, Tenn. After sacking 11 pounds, 3 ounces Thursday, Wade brought in the largest limit of the tournament today – 16 pounds, 14 ounces – to lead with a two-day total of 28 pounds, 1 ounce.

Not surprisingly, Wade is saying very little about his pattern. Any tidbit he reveals at this point can become serious artillery for his other nine competitors.

“I’m going to answer these questions like I’m taking a polygraph,” Wade joked during his interview. “I’m only going to answer `yes’ or `no’ to each question. The safe is locked up right now; I’ll tell you everything you want to know on Sunday.”

Wade would only reveal that he has about nine key spots: Some are shallow, and some are deep, but all involve grass.

“The whole key to what I’m doing is I’m fishing places where bass historically school in the fall,” he said. “When the water cools in October and November, fish school in these places on the surface over deep water. The water is still too hot for them to come up and start breaking on the surface now, but they still live down there.”

Suggs also revealed that he caught four of his five keepers on a spinnerbait.

“Yesterday, I fished these places with a worm,” he said. “Today, I just had one of those gut feelings – I pulled out a spinnerbait, made my first cast, counted it down into the trees, clicked my reel over and one knocked slack in my line.”

As another indication of how many fish Suggs is on, his co-anglers from both days have caught 10-pound limits behind him.

Thrift is fishing shallow with a topwater about half the day and then moving deep for the other half.

“My shallow-water pattern is going away fast,” Thrift said. “I’ve been getting four or five good bites a day on it in practice. Yesterday that number fell to two good bites, and today I caught just one – about a 3 1/2-pounder – on top. Then at about 11 o’clock, I started fishing deep and caught two more. I’m probably going to fish deep a lot more tomorrow.”

Riding the strength of a 14-pound, 13-ounce stringer, Castrol pro Mike Surman of

Boca Raton, Fla., rocketed his way into fourth place with a two-day total of 24 pounds, 5 ounces.

Surman is working a topwater pattern for the first hour or two in the morning for a few bonus bites and then moves out deeper to focus on deep grass. He boated eight keepers today.

“I’m fishing grass flats in 15 to 17 feet of water later in the day,” Surman said. “I’ve found a flat that has some nice high ridges and deep troughs running through it. The grass is thick on top of the ridges, and I’m flipping a big Gambler worm in that thicker grass. A lot of it reminds me of fishing flats in Florida; it’s a lot deeper than I’d fish in Florida, but the fish relate to the thicker ridges the same way.”

Surman has 10 or 12 sweet places along those ridges and feels that he has not pressured his fish too hard over the last few days.

“It’s not like I’ve pushed the areas too hard,” he said. “Being able to catch one or two early on the topwater has really allowed me to manage the deeper fish better.”

Just over Surman’s shoulder is his longtime friend and Kellogg’s pro Clark Wendlandt of Leander, Texas, who also caught 14 pounds, 10 ounces today to grab fifth place with a two-day total of 24 pounds, 4 ounces.

Like Surman, Wendlandt is fishing both shallow and deep, but he is mixing it up throughout the day.

“I’m either fishing 1 foot with a topwater or flipping grass in 15 feet,” he said. “I’m keying on something real specific in shallow water, but I need just a little ripple to get the bass to bite. If it’s dead slick, they won’t even look at my topwater. But if there’s a little ripple they’ll bite it. So as long as it’s slick, I’m out deep. But if a little breeze comes up and ripples the shoreline, I bounce back to the bank.”

At this point, Wendlandt is making a concerted effort not to “think too much” and to get his instincts to take over his fishing.

“As the tournament goes on, I’m trying to wean myself off my logical side and trust my feelings,” he said. “In my opinion, that’s what it takes to win an event of this magnitude – I don’t want to `think’ about what I’m doing; I just want the right decision to materialize naturally.”

Rounding out the top 10 pros in the 2007 Forrest Wood Cup after day two:

The top-10 cut for a million dollars has been made. Saturday’s day-three action begins at 7 a.m. at Brady Mountain Resort, located at 4120 Brady Mountain Road in Royal, Ark.