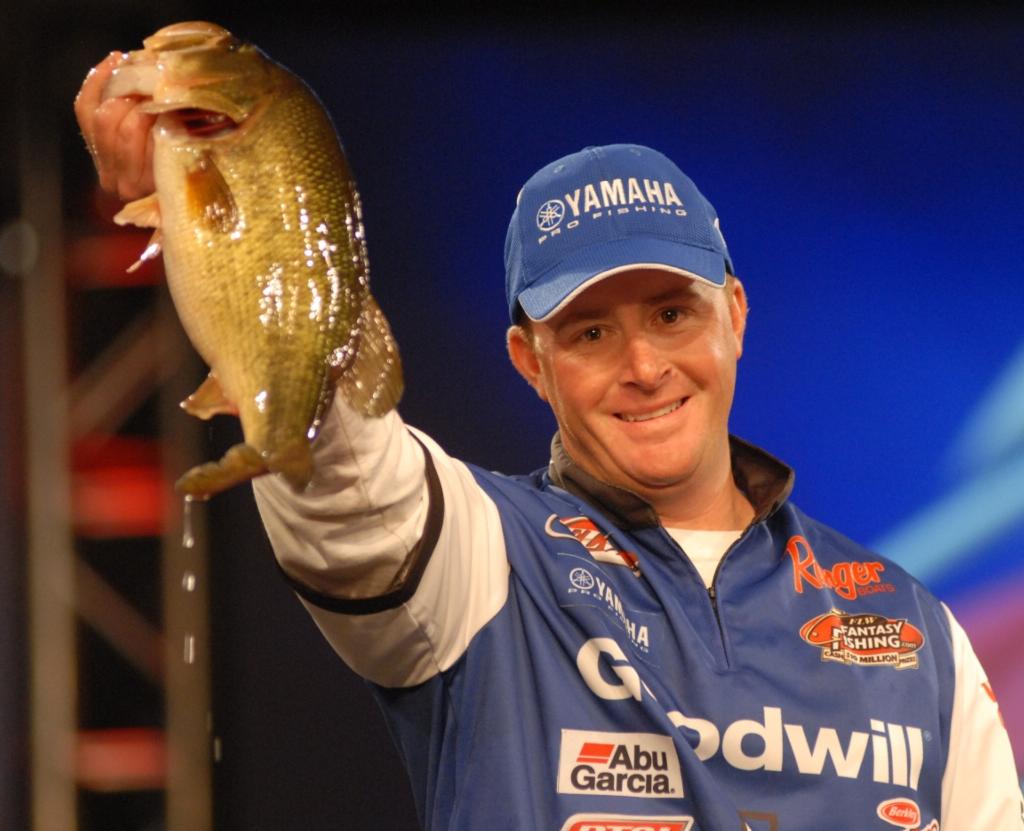 Scott Canterbury of Springville, Ala., took the lead of the Chevy Open on day three with the day’s only 20-pound plus stringer, weighing in at 20 pounds, 11 ounces. Photo by Rob Newell. Angler: Scott Canterbury.
Alabama pro in the hunt for first major win at Chevy Open
February 14, 2009 • Rob Newell • Tackle Warehouse Pro Circuit

GUNTERSVILLE, Ala. – After two spectacular fishing days on Lake Guntersville, day three of the Chevy Open saw a bit of a cool down in big catches today.

Despite great fishing weather, all pros in the top 10 noted that the fishing was “off” today. Not only were catches down, with only four five-bass limits being weighed in, but nearly all pros commented that the fish were not biting near as aggressively as the previous two days.

Most pros complained of bass merely swapping or swiping at their rattling lures rather than engulfing them into the back of their throats like they have been.

Scott Canterbury of Springville, Ala., took the lead with the day’s only 20-pound plus stringer weighing in at 20 pounds, 11 ounces.

Canterbury is a Guntersville local but today he revealed that February has always been his nemesis on the famed lake.

It has taken Canterbury a while to take a liking to the trap bite in Guntersville’s pre-spawn, but this week he has proven that he has the hang of it.

“I fish this lake a lot, mostly in the summer and fall,” he said. “And Thursday was the first time I’ve ever weighed in a five-bass limit here during February.”

Canterbury has turned his rattle bait education into a science this week.

“It takes a while to learn which rattle baits run at which depths and how to match them precisely to the depths you are fishing,” he said. “Once I got that figured out, things have really been clicking for me this week.”

Canterbury said he is fishing an area just off the river and the key element in his location is stumps.

“The grass in the area is pretty healthy, which that alone is a big help,” he said. “But there are a few big stumps in there as well and that’s the difference. This week, I’ve weighed all but one fish from this area.”

Canterbury won the FLW Tour Rookie of the Year award last year and nearly won two FLW events in the process. Now he is once again tracking down his first professional level win.

“I had the fifth one on twice and both were big,” he said of being a fish short of a limit. “They just pulled me down in the grass and got off.”

Newby is fishing a rattle bait in a small drain off the river.

“It’s a textbook scenario for pre-spawn fish,” he said. “It’s got a direct line to the main river for staging fish moving in. The whole area is about as big as a football field, but the key spot in that area is only as big as a basketball court – that’s where all the better fish have come from.” 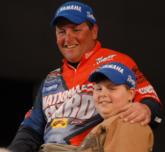 Colson is fishing an original Bill Lewis Rat-L-Trap in grass off the river.

“The whole key is mix of milfoil in hydrilla,” Colson said. “There is a good green carpet of hydrilla on the bottom, but interspersed in the hydrilla are big blooms of milfoil that stand up a couple of feet above the hydrilla. And when you hit one of those clumps of milfoil with that trap, boom, they get it. You can almost tell right when you’re about to get a bite because you’ll feel the bait run across one of those milfoil tops and then you better hang on.”

Being a Texas native, Tanner is fishing a text book grass pattern that works on his home lakes.

“During the mornings I’m fishing outside on the ditches,” he added. “But as the day warms up they move up on the inside lines in about 2 or 3 feet of water. It’s a classic pre-spawn pattern in Texas and it works just the same here.”

“I actually got more bites today than any other day, but they were all small,” Walker said. “I don’t know what happened to the big fish in there. I have not caught a bass over three pounds in two days. I even went out on the main river today to see if I could find a wad of bigger ones moving up and only caught small ones out there, too.”

Rounding out the top-10 pros in the Walmart FLW Tour on Lake Guntersville after day three: 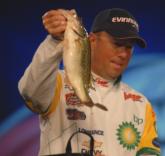 “Catch a video recap from each day’s action at the Lake Guntersville event with FLW Outdoors On-Demand video. To access the video, click here.”