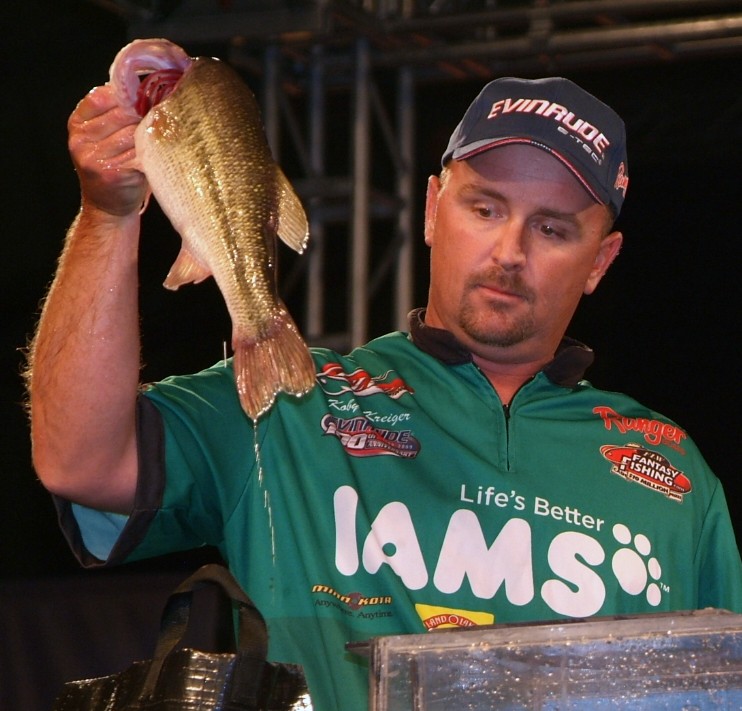 CONCORD, N.C. – With career FLW Outdoors earnings of nearly $1 million, Koby Kreiger is one of the best bass anglers in the world, and he’s especially recognized for his sight-fishing prowess. He’s never won on the Walmart FLW Tour, but that might be about to change. After catching 12 pounds, 9 ounces on day three, Kreiger is one day away from winning the National Guard Open on Lake Norman.

“I caught them today faster than I have any day of the tournament so far,” said the pro leader. “I didn’t see as many on bed as I had been seeing, but then again, I was going pretty fast. Having a limit early makes all the difference in the world; you don’t have to rush around, and it let’s you settle down. When you’re sight-fishing, you’ve got to settle down and give it time.”

Kreiger caught his first fish on his third cast of the day and another two in quick succession in the first pocket he fished, which he said was about 100 yards long. After missing his fifth fish, the Team Iams pro relocated to another pocket and had his limit after only an hour and a half.

“They keep swimming in that one pocket, and I like it. I had one that bit me twice today that I couldn’t get in the boat. It was about 3 1/2 pounds. If she would bite tomorrow, that would be huge.”

Kreiger’s bread and butter is sight-fishing for spawning bass, but he also searches the banks with a Bomber Long A and a Rebel Pop-R. All of the sight-fish have come on a white-pearl Zoom Super Hog.

“The biggest one I caught today wasn’t on a bed; it was cruising, but I still sight-fished it,” Kreiger added. “A lot of the fish show themselves to you, and if they don’t hit your bait, they at least follow it out. You can see where they come from and then turn around and sight-fish for them. You’re not really throwing those baits to catch the fish; you’re throwing those baits to get the fish to show you where they’re at.”

The Okeechobee, Fla., native said a win tomorrow would be big, but it’s not something that will define his career.

“It’s been a goal of mine since I started fishing for a living.”

Jig continues to produce for Blaylock

Fishing in his first FLW Tour top-10 appearance as a pro, Stetson Blaylock certainly doesn’t look like a rookie. After 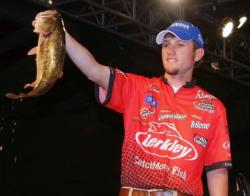 catching 11 pounds, 2 ounces on day three, he sits second with one day on the water remaining.

The Benton, Ark., native is using a 5/16-ounce homemade finesse jig with a Berkley Craw in Texas color. He says he has no real pattern other than skipping the jig under shallow docks in midlake pockets.

“I only caught five keepers today, and I should have had 10,” he said. I couldn’t get the bedders to bite good, but I found some fresh late in the day that I think can win this thing.”

Of those fresh fish, Blaylock estimates one weighs nearly 5 pounds and the other weighs approximately 3.

“If all goes right, I could catch a really big bag (tomorrow). It all comes down to whether or not these fish are ready to eat. If I’ve learned anything here, it’s that these fish like it when I skip the bait right over their head.”

Displaying the poise of a 10-year veteran, Blaylock said he was comfortable with the prospects of fishing for $200,000.

“Four years in the back of the boat really helped me. I know this is only my third tournament as a pro, but I feel like I’ve been here for forever. Tomorrow I’m just going fishing.” 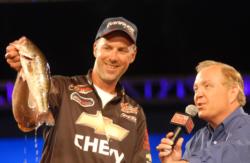 With no waypoints and no game plan, Morgan is “just fishing.” As it turns out, he’s pretty good at doing just that. Today, he caught 10 pounds, 6 ounces with a Skinny Dipper, a Super Hog and a Trick Worm. That 10-6 was good enough for third at the conclusion of day three.

“I only caught one sight-fishing,” he said. “They were eating the Dipper early this morning.”

“I’m comfortable here because you get so many bites, and that keeps your confidence up.” 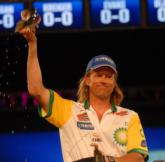 Making his third consecutive top-10 appearance at the National Guard Open was Carver, Minn., native Jim Moynagh, who caught 10 pounds even, which was good enough to end the day in fourth place.

Moynagh loves to throw a small version of the Salmo Skinner on Norman, but that isn’t working very well this week. Instead, he’s scrambling around with a weightless worm and a swimbait. The BP pro made it this far with spotted bass, which are considered inferior on Norman, but he weighed only largemouths today.

“I’ve got a funny feeling that my best day is yet to come,” he said.

Falling from third to fifth was Conway, Ark., native Keith Williams, who caught a limit worth 9-4 Saturday.

Williams is using a Zoom Trick Worm, but he rigs it two different ways – one on a shaky head and one weightless and wacky style. He is fishing pockets in the main-lake area and is keying on certain shade spots within those pockets.

“I’ll have to find some good ones tomorrow,” said the Land O’Lakes pro. “I had a good one hooked that I lost right at the boat. It was probably 3 1/2 or 4 pounds. I’m going back to it first thing tomorrow morning.”

Rounding out the top 10 pros at the National Guard Open on Lake Norman:

The final day of the National Guard Open on Lake Norman will begin Sunday a 7 a.m. at Blythe Landing, located at 15901 North Carolina Highway 73 in Huntersville.