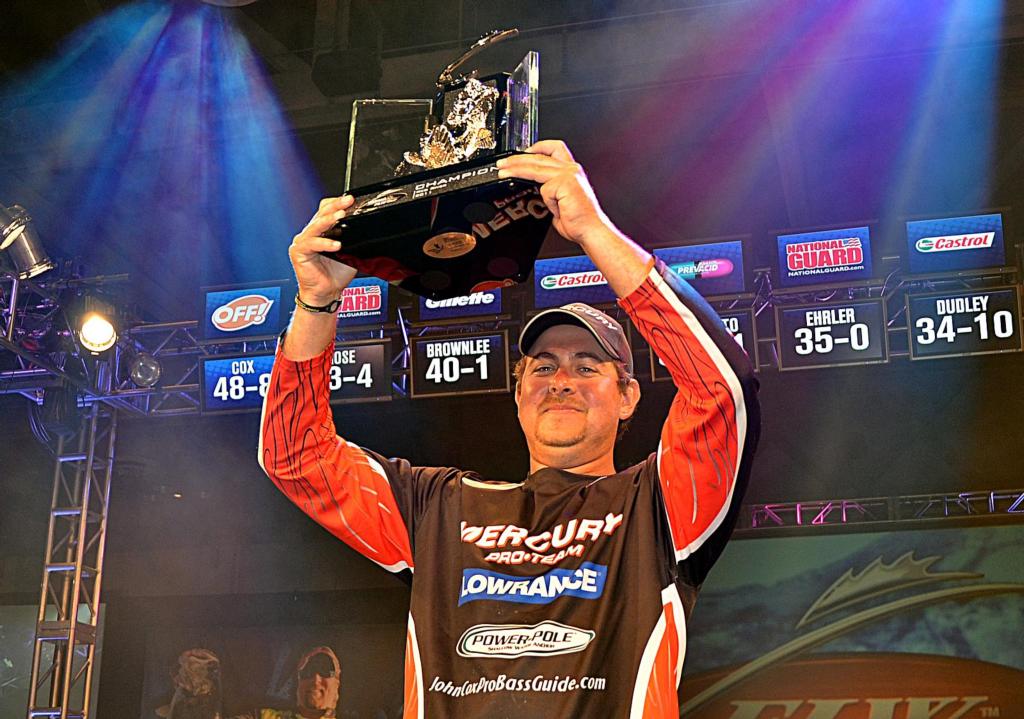 SHREVEPORT/BOSSIER CITY, La. – Mercury pro John Cox has enjoyed the view from the top of an FLW leaderboard before: Last year he led the opening three days of the FLW Series Eastern on Lake Okeechobee in his home state before snatching defeat from the jaws of victory on the final day, ending it the runner-up; then he led day one of the next FLW Series event on Lake Eufaula, only to finish seventh. He even won the 2010 points race in that circuit. But he has never enjoyed a tour-level win – until today, that is.

The Debary, Fla., pro has been a top-notch grass-roots angler in the Walmart BFL, stringing together two wins, three runner-up finishes and another four top-10 finishes since 2004; he was a consistent 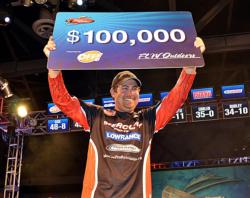 performer in the EverStart Series Southeast Division from 2005 to 2007, qualifying for two championships, but top finishes eluded him, including a 2007 tourney – again on Lake Eufaula – in which he led the opening day only to finish 30th; and while he had measured success as a touring pro last year in the FLW Series, his earnings on the season would be just enough to fish a full 2011 schedule on the Walmart FLW Tour (including both Majors and Opens).

In other words, this 25-year-old rookie Tour pro has struggled to stay afloat this year and has even borrowed some money from friends, he said, to continue his quest. So when he sacked a limit of five bass Sunday to contribute to a four-day winning weight of 48 1/2 pounds and complete his wire-to-wire victory march at the Red River, you can bet that success for him felt sublime.

Immediately before the final weigh-in, Cox said of what a win would mean: “It would be amazing … winning this far from home. I just want to get it off my back and finally get a win. It would give me a lot of confidence.” 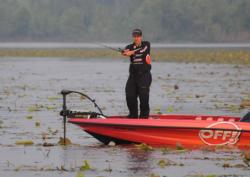 When Cox’s 7-13 limit sealed the deal Sunday, it gave him confidence that extended beyond a fishing boat as well. He proposed to his girlfriend via FLW Live with the Red River trophy in hand and a check for $100,000 at his feet – a promise he’d made back at Okeechobee last year, when he said he’d pop the question when he won a tournament: “Cheryn, would you marry me?”

And the kicker to this personal story is a conversation he had with Cheryn, who is expecting, before he left home for the Red River: “We were thinking of baby names and kind of joking around, I said, `If I win at the Red River on lily pads, we should name her Lily,’ so I guess she’s going to be Lily.”

But there was fishing to be done to warrant a celebration, and here’s how he did it. On days one and two, Cox accessed a backwater area downstream in Pool 4 via a seemingly impassible culvert; it was an area he learned about at a tournament two years ago. He fished out of a 17-foot aluminum boat with a small 75-hp engine and even took all but one battery out to lighten his load as much as possible. Still, it was incredibly difficult to pass through the tunnel, which was so shallow it caused his boat to bottom out and get stuck (click here to watch video of the process).

Once he broke on through, Cox quickly sacked strong limits of 14-10 and an even 14 pounds over the first two days by fishing a Dandy Baits 1/2-ounce jighead with a green-pumpkin/green-glitter skirt and then a ChatterBait and swimbait.

On days three and four, he “just fished around the ramp” in Pool 5 – including lily pads, where he boated his first keeper early this morning – as well as a backwater fishing hole he found about two miles south. That plan worked well for a 12-1 limit Saturday, but today the water was low enough that he had to access it via a narrow and shallow ditch (sound familiar?), which he could only achieve by making a fast run at it and blasting through the mud. 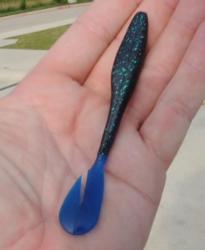 “I looked at it and I thought, `There’s no way I’m going to idle in there,’ so then I throttled it and went in there at about 50 mph,” he said, adding that he only caught one there today off a bed on a craw, and that’s when he started to get nervous.

“I was a wreck today all the way until the end,” he said. “I couldn’t cast. I didn’t feel like I was in my shoes.”

Eventually he went back to the launch site at about 1:30 p.m. and worked the lily pads again with a Producto Buzztail Shad until he finally rounded out his limit in the last 20 minutes of his fishing day.

Cox got the monkey off his back today, and he’s clearly a competitor of the highest caliber, so it’s reassuring for many fans of professional bass fishing to know that he will use his winnings – along with what he earns as a fishing guide and doing odd jobs – to not only start a family, but also to keep on fishing.

“It would pay for the rest of the year, and I’d be able to fish for bigger fish,” he said before the win – that’s good news for the sport. 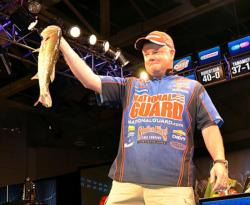 National Guard pro Mark Rose of Marion, Ark., added yet another top-10 finish to his already-impressive FLW record, sacking the heaviest pro limit of the day – 12 pounds, 11 ounces – to give him a three-day total of 43-4 and the runner-up finish worth $32,553. Despite falling short of another tournament win, Rose was a good sport.

“I’m very proud of John,” Rose said, adding that he didn’t buy into some of the negative comments he heard earlier in the week regarding Cox’s unorthodox method of accessing his secret fishing hole, including the lightweight boat. “He utilized it real well and did his homework. I hope he wins.” 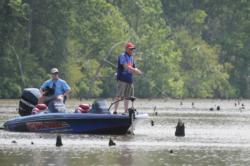 As far as the fishing, Rose stuck to the same small oxbow in Pool 5 all week.

“It’s a grind out there,” Rose said. “I caught all my fish this week on a Strike King KVD 1.5 (crankbait) and a Strike King Premier Pro-Model spinnerbait.”

Though Rose had said earlier he knew the rest of the field was “fishing for second place,” it didn’t stop him from getting excited Sunday as he put together his best tournament day on the Red River.

“I was fired up,” he said about landing his two kicker fish today. “It’s just been such a grind that that was a positive moment … and that’s what you ned to keep the momentum going. Otherwise you’re just getting sunburned and bored.” 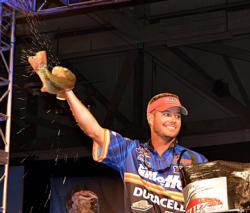 Pro Clint Brownlee of Tifton, Ga., went into the final day in second place with the best odds of catching Cox, but it wasn’t meant to be. He sacked a 7-14 limit (after 1 1/2-pound dead-fish penalties) from the same backwater oxbow he’d fished all week not far from the launch site.

“My water was down, and the sun was out,” he said, adding that the conditions didn’t line up well with his topwater buzzbait pattern. “I caught four fairly quick, and when the sun came out, I had to start flippin’.”

He caught most of his fish this week on an 1/8-ounce Strike King buzzbait, and some flipping everything 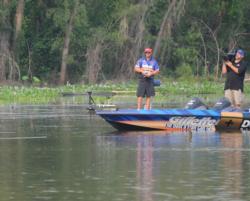 from a Zoom Trick Worm (over the first few days) to a Grandebass Mega Claw and a Big Bite Fighting Craw (today).

“I gave it all I had today,” he said, adding that he was still pleased with his performance. “This is my third year fishing the Tour … this is my first top-10, and I want to come back. It’s really hard to make the top 10 – trust me on that.” 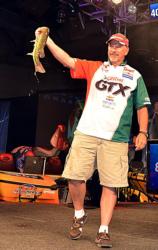 Castrol pro Darrel Robertson of Jay, Okla., rocketed 15 slots up the leaderboard yesterday and held onto his fourth-place position to end the tournament. He caught a five-bass limit for 10-13 today, giving him a total weight of 40 pounds worth $23,219.

After locking down to Pool 4 the first three days, Robertson stayed with the majority in Pool 5 today.

“I caught it all off of wood, right there at the takeoff,” he said. “I had about four lay-downs yesterday where I was catching them, and they had to have a root showing out of the water. Today it had to have brush around it.”

Robertson caught his bass this week on a green-pumpkin Biffle Bug, whether he was keying on grass – like early in the tournament – or wood. Today he plucked a limit of bass from wood by 8 a.m. before upgrading a few times. 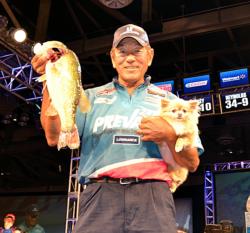 Gary Yamamoto is a well-known bass pro and highly renowned for his line of soft-plastic baits. After a dry spell on Tour, he put together a Red River game plan this week that earned him a fifth-place finish with a total weight of 37-11 worth $18,553.

With his ever-present dog Isabella accompanying him to the weigh-in stage, the Palestine, Texas, pro had a little fun while in the spotlight – even placing the pooch on top of the weigh basket in a humorous attempt at boosting his already-impressive (and legitimate) 10-4 limit. 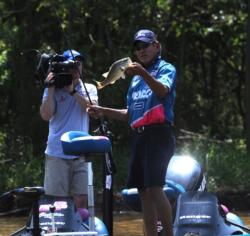 flounder, but unfortunately I caught too many fish,” he said.

Yamamoto fished just south of Clark’s Red River Marina all week and was of course fishing with his own soft-plastic baits, including a Yamamoto Craw, a Yamamoto Hula Swimmer and a 5-inch prototype craw with a double tail, all colored black and blue. Today he managed his two kicker fish from a small bush “with two legs” that he had worked earlier in the week – to the tune of at least 20 flips – to no avail.

Rounding out the top 10 pro finishers at the Walmart FLW Tour Major on the Red River:

FLW Tour action resumes in early June when the circuit visits the Potomac River for an Open event.