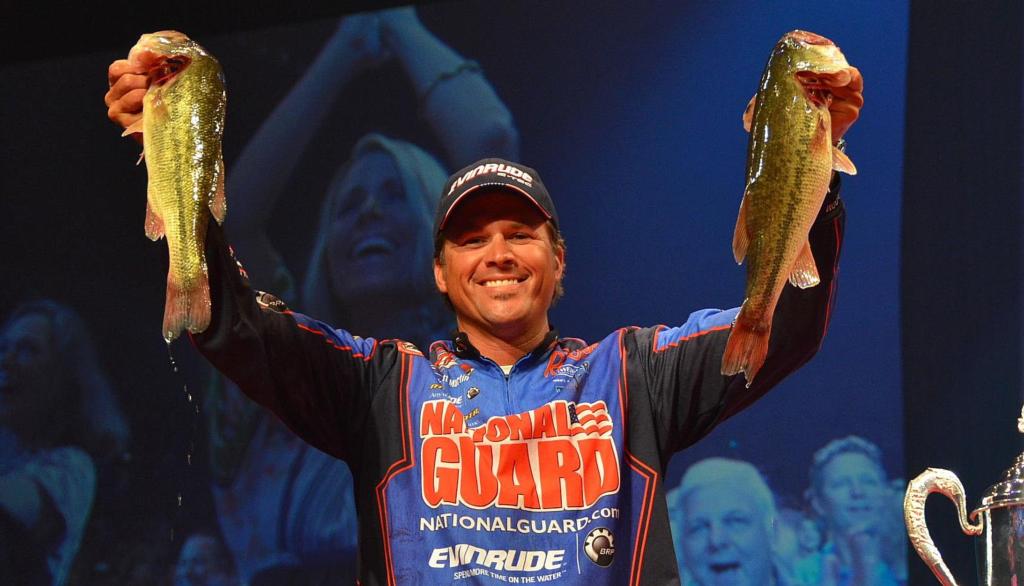 HOT SPRINGS, Ark. – Despite having three Walmart FLW Tour wins, it was easy to recognize Scott Martin as the son of legendary angler Roland Martin. But after claiming the 2011 Forrest Wood Cup on Lake Ouachita, it’s clear Martin has stepped out of his father’s shadow and is carving his own remarkable career.

With his fourth victory in hand, Martin trails only David Fritts in terms of FLW Tour wins. Even more impressive is that the Clewiston, Fla., native has won on a natural lake (Champlain twice), a river (Pascagoula) and an impoundment (Ouachita). After cashing a $600,000 check, his career earnings of nearly $2 million rank second only to David Dudley in FLW Outdoors history. The accolades are striking, but Martin had to work for his Ouachita win.

After alternating between shallow and deep during practice, Martin became convinced he could catch quality largemouths offshore. When it became obvious most of the field was fishing shallow, it only cemented his decision to stay off the bank.

While he had several areas, one 150-yard stretch northwest of Bird Island proved to be the most productive. The key to the area, Martin said, was the presence of large shad, which were pushed in 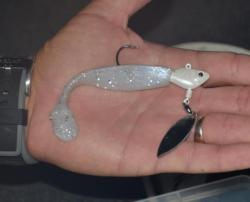 each day by the wind. He followed these balls of shad in 23 to 27 feet of water by looking at his graph. When he’d see a bass, he’d immediately release a drop-shot and Roboworm to the bottom of the lake. But most of his big bites this week came on a 1/2-ounce Sworming Hornet Fish Head Spin, which he tipped with a Yamamoto swimbait body. He also mixed in a 10-inch Texas-rigged ribbontail worm (plum color), which accounted for most of his final-day fish. All three baits were tied to Segaur Invizx fluorocarbon line – 10-pound-test for the drop-shot and Fish Head Spin, 12-pound for the worm.

“Right off the bat the first morning, I caught three good ones, and I told my partner, `I can win the tournament in this spot,'” Martin recalled. “Lo and behold, that’s exactly what happened. It didn’t look like much on the graph, but it kept on reloading because of the bait.” 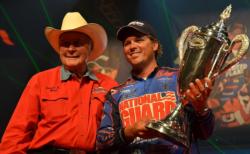 The National Guard pro started fast out of the gate with a 19-pound, 2-ounce limit as the largemouths roamed and ambushed the shad. But on the second day, he struggled with only 11-9 while his co-angler partner sacked 17-11. Expecting adversity during the course of the week, Martin bounced back with a resilient 16-pound, 1-ounce limit Saturday. On the final day, he discovered that the fish were holding tighter to the brush in the clear conditions. Once he put down the swimbait and switched to the worm, he started getting bit and eventually finished with 14-5.

“The key today was I dropped markers down on specific brush piles so I could pick them apart thoroughly. I suspect that’s what happened the second day too. Looking back, what happened that day was unfortunate, but at least I learned something from it.” 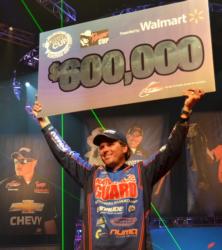 If there was any question about this being Martin’s tournament, it was answered when he moved shallow for the first time all week and immediately caught a keeper off a bream bed. Then on his very last cast of the day, he caught another keeper out deep. Neither fish likely mattered in the outcome, but they were indicative of Martin’s mojo.

“I remember as a kid going to all the championships and wishing that someday I’d win one. I’ve dreamed of this all my life. For my family and everyone that supports me, this is special.”

Despite catching 16 pounds on day one, Randall Tharp was visibly upset after missing several big fish. He repeatedly mentioned that to win the Forrest Wood Cup, he’d need to capitalize on all of his big bites. And as it turned out, he was right.

“I dumped a 20-pound stringer the first day, and I dumped a 5-pounder today,” he said. “But you’re going to lose them fishing that way; that’s part of it.”

The Gardendale, Ala., pro fished wolfpack bass over shallow bluegill beds all week. The bluegills would spawn both on the sides of points and in the timber-laden pockets. He had four productive areas 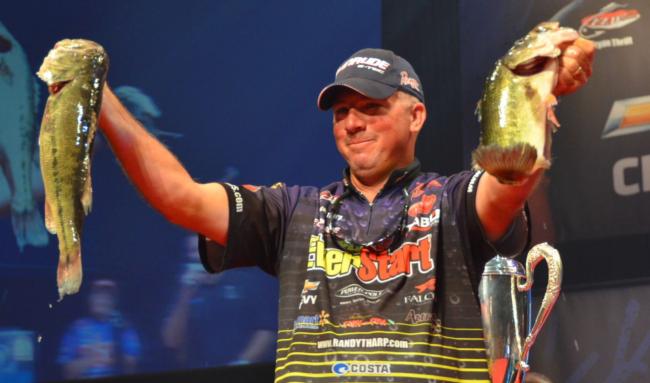 located in the Crystal Springs area of the lake, which he’d rotate through two or three times per day.

Tharp’s main bait this week was a Brian’s Bees Prop 3, which he threw under calm conditions. When there was a chop on the lake, he’d opt for a Lucky Craft Sammy or Gunfish. But the Prop 3 accounted for the lion’s share of his fish. He’d throw these baits with 30-pound braided line and a 6-pound monofilament leader.

“I was making long casts, because if they saw you, you wouldn’t catch them.”

Toward the end of the week, Tharp was becoming proficient at popping the bait and making a loud noise without moving it much from the precise strike zones.

“I gave it 100 percent every day, and I have no regrets. But it’s not every day you have a chance to win the world championship of bass fishing.”

Tharp now has two second-place finishes in 2011. Ironically, he finished runner-up to two Lake Okeechobee locals in Martin (this week) and Brandon McMillan (at the Big O in February). His consolation prize at the Cup is a $100,000 check. 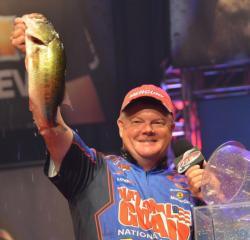 Mark Rose tried to win an endurance race this week at Lake Ouachita, but the cool, cloudy weather experienced on days one and three put him behind the 8-ball. Although he steadily climbed the leaderboard each day, Rose ultimately finished third with a total weight of 50 pounds, 15 ounces. The Marion, Ark., pro’s final-day stringer weighed 9 pounds, 10 ounces.

Rose fished offshore points and channel swings near the intersection of the main lake and the river and said most of his fish came from about 17 feet. Like Martin, the presence of big shad was key for the National Guard pro.

While Martin caught several 4- and 5-pounders, getting big bites was tougher for Rose. In fact, his biggest bass Sunday came from shallow water and fell prey to a Strike King Pro Model buzzbait.

When he was offshore, the Pickwick Lake champion employed a variety of offshore lures including crankbaits, spoons, Carolina rigs, swimbaits and drop-shots. He said his key to the bigger fish was the Strike King Shadalicious swimbait, which he rigged with a 1/2-ounce jighead.

“I was fishing my strengths, so I’m content,” he said. “If we would have had different conditions, it might have made a difference.”

Rose claimed $60,000 for third and finished the year with four consecutive top-10s.

“Momentum is everything in this sport, and I’m just comfortable and confident out there right now.” 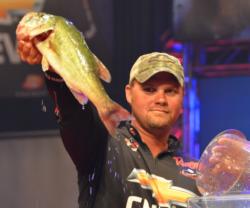 “I’m disappointed with the day I had, but I wouldn’t have done anything different,” he said. “The topwater bite was OK early, but went downhill quickly.”

Clausen fished bluegill beds on flat drains located in the midlake region. He had one particular 300-yard stretch of water he would revisit multiple times with the hopes of reconnecting with the wolfpacks.

When it was choppy, the 2004 Forrest Wood Cup champion would throw a Megabass Giant Dog-X. When it was raining and still, he’d opt for the Brian’s Bees Prop 2. He would also occasionally mix in a Reactions Innovations Vixen.

“I still saw tons of 3- and 4-pounders out there today. I didn’t lose that many; they just wouldn’t bite.” 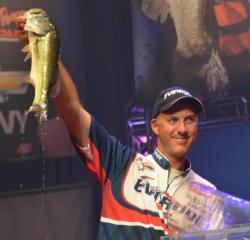 Andy Morgan caught a limit worth 10-2 on day four and unexpectedly rose from 10th to fifth. The Dayton, Tenn., native finished the tournament with a four-day cumulative weight of 47 pounds, 5 ounces worth $50,000.

“I wasn’t as dialed in on the bluegill pattern as most of the guys, so I had to fish faster and cover more water,” he said.

Morgan’s performance is impressive considering he spent only four hours practicing shallow, instead opting to work the deep grass. Once the tournament commenced, he fished the Crystal Springs area with a Reaction Innovations Vixen. By the end of the week, nearly all the paint had worn off it from innumerable blow-ups.

“It has been an absolute grind. But for a highland impoundment in August, the bite has been exceptional.”

Rounding out the top 10 pros at the 2011 Forrest Wood Cup on Lake Ouachita: