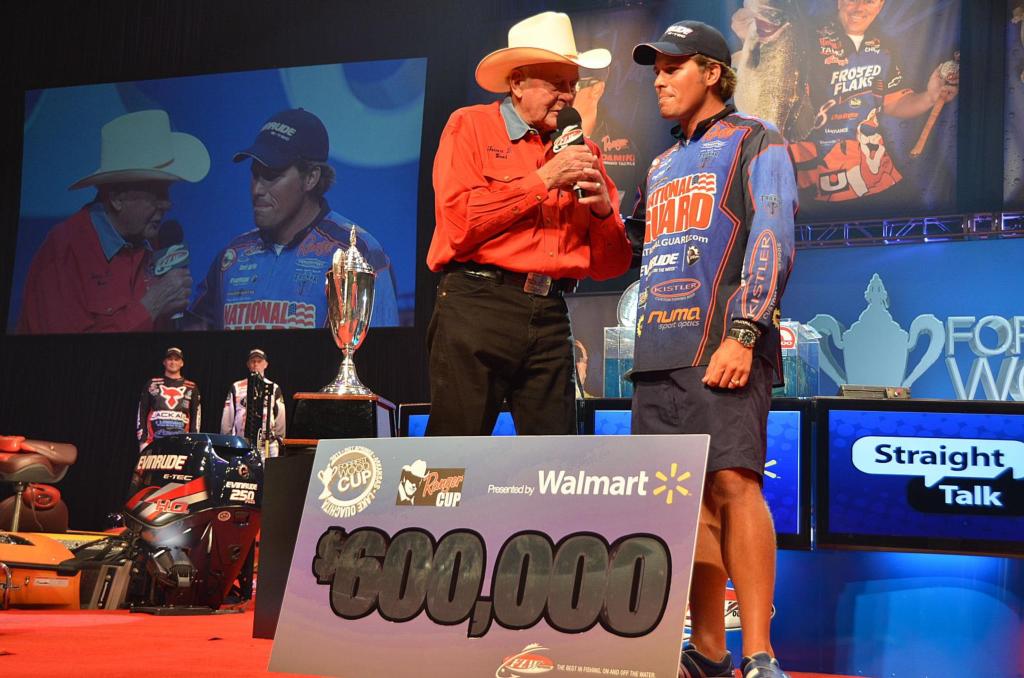 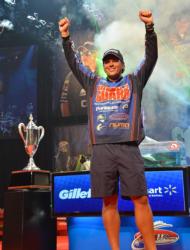 Martin takes the crown … Although Scott Martin came into the finals with a nice 5-pound cushion, by 1 p.m. he only had three fish in the boat. It was at that time that Martin acknowledged that the nerves finally started to get to him. “It was a lot of pressure to deal with. I had basically been leading the tournament for four days, and it was definitely starting to get pretty stressful. And when I only had those three fish, I started to feel the pressure. That’s when I reached into my pocket and pulled out this note.” The note was from a friend and it said, “Relentless competitor – relax. Today is my day.” “I read that note a bunch of times today, and that really helped me calm the nerves.” Shortly thereafter, Martin boated two more fish. A few culls later and Martin was truly able to relax for almost the first time all tournament. “I knew if I could catch 12 or 13 pounds, those other guys would basically have to come back to weigh-in with their biggest sacks of the tournament to beat me.” Luckily for Martin, that never happened. In fact, on the final day, only second-place finisher Randall Tharp returned with a larger stringer (which happened to be only 12 ounces bigger than Martin’s). As a result, Martin wound up cruising to an easy 5-pound victory. To achieve that victory, Martin said he relied on a combination of Gary Yamamoto swimbaits, drop-shots and 10-inch worms. However, today he relied almost exclusively on his worm bite, which he Texas-rigged while targeting bass in 20 to 25 feet of water. And what did it feel like to finally win the Cup after chasing that dream for 10 years? “This is the Forrest Wood Cup. This is what you fish for. It was a tremendous blessing. I still can’t believe it really happened. I’ve been waiting for this moment my whole life.” 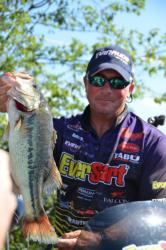 Tharp finishes in second place, again … Though he put forth a valiant effort, in the end Randall Tharp simply couldn’t overcome Martin’s 5-pound lead. However, when all was said and done, he said he had no regrets. “It was a fun tournament. I gave it 100 percent every day of this event. And I have no regrets. Scott was doing something different than the rest of us, and the best man won.” While Tharp said he was happy with his effort, he admitted that his recent string of second-place finishes was starting to get a little old. “I finished second at the FLW Tour event at Lake Okeechobee, finished second at a BASS event on the James River and finished second today. But the way I look at it is that I’ve only been fishing the FLW Tour for three years now. So hopefully I can start turning those second-place finishes into firsts here pretty soon.” In a direct contrast with Martin, who fished deeper water all week, Tharp said that he targeted bass with a Brian’s Bees Prop 3 topwater almost exclusively throughout the week. “The key was that, when the sun popped up, you had to be really quiet and make pretty long casts; because if those fish saw you, you weren’t going to catch them.” 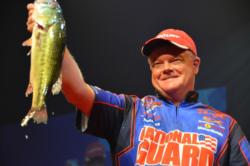 Rose climbs the leaderboard on final day … Now matter how you slice it, it’s been quite an amazing past couple of weeks for Mark Rose of Marion, Ark. In late July, Rose finished in first place at the FLW Tour Pickwick Lake event to capture his very first Tour title. Today, Rose leapfrogged from sixth place to third in the biggest bass-fishing event of the season to land a nice $60,000 check. And for Rose, he couldn’t have been happier. “I was able to fish to my strengths this week. I got to fish the way I like to fish, so it was a lot of fun. In fact, I wound up using a lot of the same baits I used for my victory on Pickwick Lake.” Unlike many of the top pros, Rose didn’t rely on one primary bait for his catches. “I used swimbaits, crankbaits, spoons, buzzbaits- a whole lot of different deals this week. Basically, that Pickwick Lake win just gave me a whole lot of confidence. And my confidence has been building all year. I’m a student of the sport, and you can never stop learning. And even though I didn’t win the tournament, I’m going to lay my head on that pillow tonight and be very content.” In the end, Rose said Martin deserved the victory. “I feel very blessed this week. It was just Scott’s tournament to win. He earned that title.”

0: Number of anglers who have won more than one Forrest Wood Cup title. Both David Dudley and Luke Clausen had a chance today, but couldn’t pull it off.

3: Total number of ounces of Todd Auten’s massive swimbait – easily one of the biggest baits fished during the tournament. It also measured a whopping 6 inches in length.

4-10: Total weight, in pounds and ounces, of Scott Martin’s margin of victory.

5: Total number of limits recorded by the top 10 pro finalists.

15-1: Biggest stringer, in pounds and ounces, recorded in the finals (Randall Tharp). 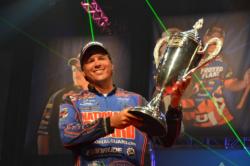 25: Minimum dollar amount, in thousands, that a Forrest Wood Cup finalist could walk away with.

39: Total number of fish caught by the pros during the fourth day of Cup competition.

81-1: Total weight, in pounds and ounces, caught by the pros during the final day of Forest Wood Cup competition. 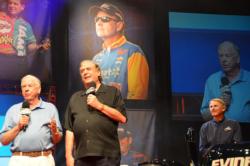 “We’ve got to hurry. I’m 83.” – T. Boone Pickens, joking with Irwin L. Jacobs onstage about having to fast-track some new ventures for FLW Outdoors because he wasn’t getting any younger.

“I’m ready. And I’ll bet some of those fish are ready, because for some of them, this is the first time they’ve been to town.” – Forrest L. Wood encouraging the weigh-in to start for the sake of the fans, anglers and the fish.

“After making the first few casts on that first day, I turned to my partner and said, `This could be a really good tournament for me.'” – Scott Martin.

“And thanks to FLW Outdoors. That’s where I started my career, and I’ll never forget that.” – Pro Andy Montgomery, who has also established a very successful fishing career at BASS.

“I’ve just had a blast. To have a chance to win the Cup on the final day, what else could you ask for?” – Pro Cody Meyer.

“I kind of just went for broke. I was going to go out swinging. I just didn’t have it today.” – Pro Todd Auten on today’s sixth-place finish.

“I felt like I fished the whole lake today. I just couldn’t get a bite.” – Pro Jason Christie, who only managed to catch one fish in the finals.