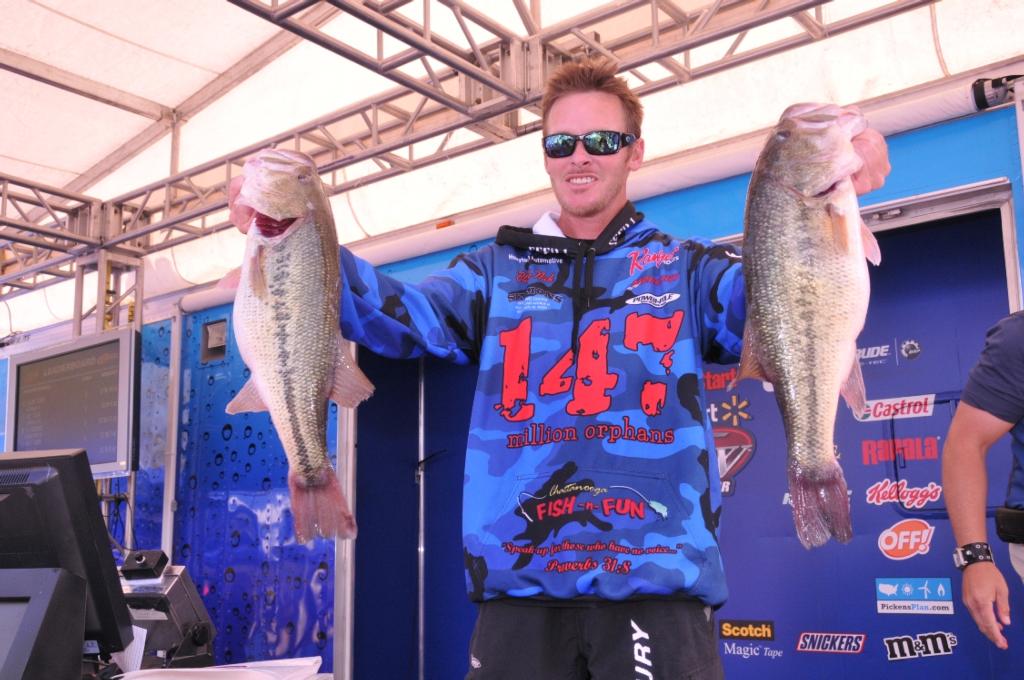 BRANSON, Mo. – It’s no secret that many of the bass are up spawning on Table Rock Lake. But it’s early; most of the bass haven’t paired up yet and instead are just fanning and cruising. So instead of sight-fishing, the tournament leaders have resorted to either targeting prespawn fish or stealthily blind-casting to beds.

Pro leader Blake Nick said he’s terrible at sight-fishing and instead chose to junk-fish with long casts. The end result was a five-bass limit that weighed 21 pounds, 4 ounces. Of those five, four were largemouths, the other a chunky spotted bass.

“I saw them doing their thing during practice, and on the last day I had enough of it and went and tried to find my own thing, something where I didn’t have to sight-fish. The ones I’m catching are staging fish.

“I fished a lot of stuff today,” added Nick, an FLW Tour sophomore from Adger, Ala. “I started out this morning with a 4-pounder on my first cast.”

Nick said he had a limit in the boat by 8:30 and covered a lot of water throughout the day – hitting nearly 20 places. He said his better fish came after noon when the wind picked up.

“There are so many chunky 15-inchers in this lake it’s all about getting the good bites. And who knows when they’re going to come? I’m expecting to catch fish, but I know how it goes. I had a great first day at Hartwell and blew up on the second day and ended up missing the cut. To come back out here and put that behind me feels good. Now I get the chance tomorrow to redeem myself. This is a lot of fun.

“I think my places are reloading every day. These fish have not spawned yet. The area of the lake I’m fishing seems a week behind the rest of the lake.”

Nick said he was surprised he was leading the tournament.

“Somebody could come in tomorrow with 25 pounds by sight-fishing. These guys are so good at it. We fish with the best sight fishermen in the world, and I’m sure one of them is going to load the boat tomorrow.”

Second-place pro Terry Bolton said he sight-fished a little bit Thursday, but instead of casting towards 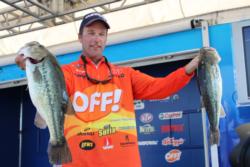 the fish, he’d try and gently flip the bait on the bed.

“Usually you can see the beds, but you can’t see the fish,” said Bolton, who weighed an all-largemouth sack worth 21 pounds, 1 ounce. “I had a bad practice, but things are changing and the fish are getting more aggressive. I actually started the day deep, but came to the bank around 9 a.m.”

Once Bolton realized the fish were paired up, territorial and ready to eat, he covered a lot of water.

“I’m flipping a Trigger X creature bait and looking for beds while I make long casts. Everything came shallow except for one staging fish that I caught off a point as I was headed to the next pocket.” 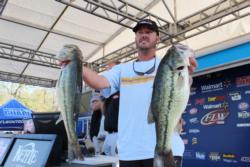 “My trolling motor quit at about 12:30 this afternoon,” he said. “I think it’s an electrical problem. Thankfully when it quit, I already had my weight so I just let the wind push me and I drifted around.”

Brownlee said he too is mainly targeting prespawners, but one of his five keepers came off a bed. Four of those five were largemouths, the other a brown bass. He’s mainly throwing moving baits such as crankbaits, spinnerbaits and the A-rig. Brownlee goes through a lot of keepers to eventually get a big, quality largemouth.

“I’m excited because I found out they are relating to a certain kind of bank.” 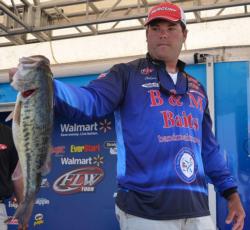 Like many, Clent Davis is employing the look-while-you throw strategy. It worked to the tune of 20 pounds even on day one.

“I intended to fish for smallmouths, but ran into largemouths instead,” said the Montevallo, Ala., native. “I was culling all day; it probably took me 25 keepers to get to that weight. It seemed like I would catch a fish every 20 minutes.”

“What I’m looking for there’s just not a lot of it on Table Rock. It’s a good pattern but things are changing every day so I might have to sight-fish exclusively and that worries me some. To me, the fish were more skittish on beds today than they were in practice and I thought they would have been better.” 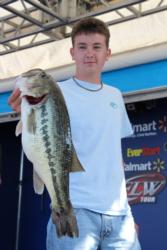 Nineteen-year-old rookie Kyle Welcher sits in fourth place after catching a limit worth 19 pounds, 12 ounces. Anchoring that 19-12 was a 7-pound, 6-ounce largemouth, the Snickers Big Bass of the day in the Pro Division.

“Sunday was my first day ever on Table Rock,” he said. “And practice wasn’t too good to start either. But it’s picked up a lot since. The water where I’m at is only 67 degrees and the fish are fat as can be – definitely prespawn.”

Welcher then reflected on his first big stringer as a pro.

“I’ve been watching FLW on TV since I was 10 years old and I’ve always dreamed about holding a big one up on stage like that.”

Rounding out the top 10 pros on Table Rock after day one:

Bertrand busts huge bag from the back 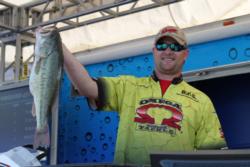 “This is just incredible,” said Bertrand. “I caught that big one (6-15) first thing and it just never stopped. Today was just my day; God shined his light on me.”

Bertrand described the shallow fish as spooky so he backed off and targeted prespawn bass whenever possible. He said he caught them on “pretty much everything.”

“I’m just thankful to be around so many fish.”

Bertrand has never led an FLW Tour event, so this was a big deal. 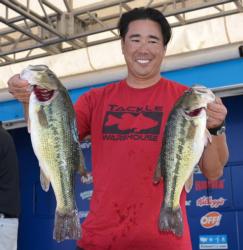 The Boulder City, Nev., native achieved his weight with only four keepers, two of which were kicker largemouths.

Chad Pipkens of Holt, Mich., rounds out the top five with 12 pounds, 13 ounces.

Rounding out the top 10 co-anglers on Table Rock after day one: