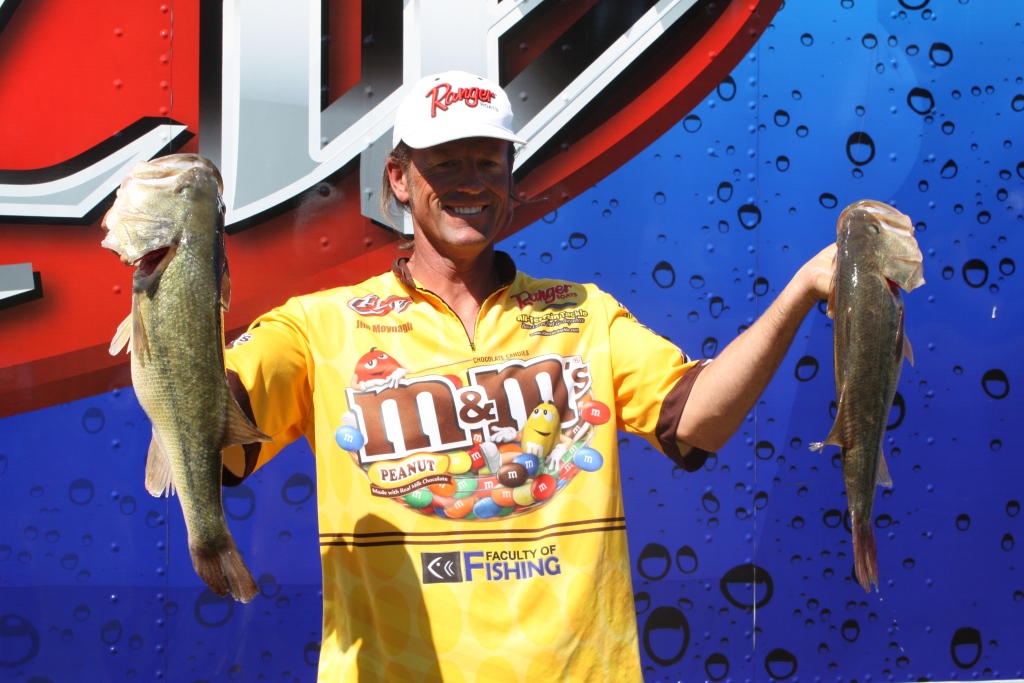 GILBERTSVILLE, Ky. – It was another slugfest on day two of Walmart FLW Tour competition on Kentucky Lake, but even with limits and big bass being weighed in left and right, Jim Moynagh of Carver, Minn., still managed to open up a 3-pound, 8-ounce lead heading into day three with a two-day total of 40-6.

Moynagh’s day-one catch of 18 pounds, 11 ounces put him in the top five, but his day-two limit of 21 pounds, 11 ounces – the heaviest of the day and the only stringer on day two to exceed 20 pounds – put him atop the leaderboard.

Competitors have their choice of fishing Kentucky or Barkley lakes – both of them rather massive bodies of water – and Moynagh chose to hit Kentucky today.

“This lake’s got a biomass of fish,” Moynagh said. “When you idle over these points, there’s always stuff on my graph.”

Moynagh found the spot in practice, and it continues to pay dividends.

“These fish are relating to a little drop on a gravel bar,” he said. “I happened to wander along this ledge, and lo and behold, I caught a couple.”

The spot has continued to yield fish after heavy fish for the M&Ms pro, who nonetheless says he cannot be sure it will hold up tomorrow.

Moynagh said he’s been catching the majority of his bass on an All-Terrain Tackle football-head jig. 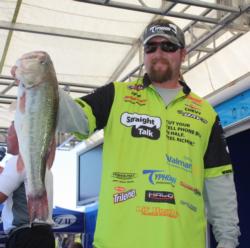 Rising four spots up the leaderboard is Straight Talk pro J.T. Kenney of Palm Bay, Fla., with a two-day haul of 36 pounds, 14 ounces. Kenney showed consistency in his catches, weighing in 18-10 on day one and 18-4 today.

“I went a little bit south, as far south as Paris (Tennessee),” Kenney said, referring to his honey hole on Kentucky Lake. “My hands are sore – I don’t know how many I caught today. It was fun.”

It seems that on these lakes this week, electronics are of particular importance to the pros, and Kenney is no exception.

“I do not fish at all until I graph them and make sure they’re there,” he said.

As for what he’s throwing, he says they’ll eat whatever he feels like tying on – they’ve bit Alabama rigs, crankbaits, worms, jigs, you name it.

“It really doesn’t matter,” he said. “When they’re up on front of structure, you can tell they’re out there eating.” 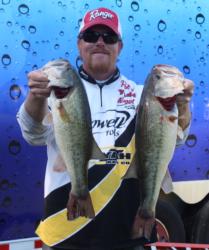 Kyle Mabrey of McCalla, Ala., brought in 16 pounds, 9 ounces yesterday that had him in 21st, but a five-bass limit today weighing 19 pounds, 11 ounces vaulted him all the way to third with a two-day total of 36-4.

“I’m fishing deep on Kentucky Lake, and I love to do that,” Mabrey said. “I love to rely on my electronics and GPS, because it’s important to find the right areas.”

For Mabrey, it’s a spot he’s managed to keep to himself. It’s small – only about 50 yards – but he said there is one specific area within the area that seems to hold the big bites.

“I’m not having to battle for it,” he said. “They’re deep here one day and gone the next, but I have a good feeling about this place.”

Mabrey said he thought weighing in 17 to 18 pounds per day ought to be enough to make the cut, and he feels like things are going according to plan. He said he was using a big Zoom worm and a Yellow Hammer rig, but like Kenney, his bass seem to be receptive to whatever he throws.

“There’s no golden lure; it’s just getting them fired up,” he said.

Wheeler hangs in for fourth 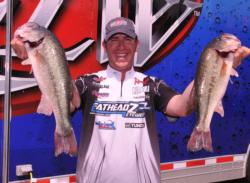 Fatheadz Eyewear Pro Jacob Wheeler brought in about 3 pounds less than he did on day one, but his day-two limit of 16-6 was plenty good enough to keep him in the top five. His combined weight of 35 pounds, 9 ounces currently has him in the fourth position heading into day three.

Lots of competitors this week have reported that the bite doesn’t turn on until they start running the current late in the morning, but Wheeler has found an exception.

“The schools of fish I have are in areas that don’t get as much current, so they feed when they want,” he said. “They’re more consistent.”

Wheeler’s also fishing shallower than most, catching his bass in 10 to 14 feet of water.

“These fish are more in a creek area,” he said. “It was something out of the box I figured I’d check out.”

Wheeler reported catching most of his bass today on a football-head jig.

“I caught a lot of fish yesterday on a DT 16, but today they didn’t seem to want a crankbait,” he said.

Shuffield moves up to fifth 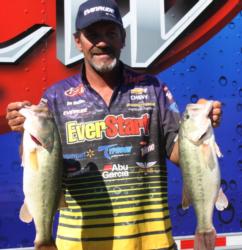 Setting Shuffield apart from his fellow top-five pros is the fact that he’s catching his bass on Barkley.

“I’m fishing ledges like I would if I was on Kentucky,” he said.

That said, Shuffield’s main area requires him to pay close attention to his electronics. As soon as he sees shad start moving on the graph, it’s time to throw.

“I’m catching 2- or 3-pounders, but the bigger fish are right off the drop,” he said. “You have to be watching all the time. If they hit it once and miss it, they’ll hit it again. All I can attribute it to is the low water and lack of current.”

Shuffield was using a 6-inch saltwater mullet – “It’s a big bait,” he said – on a flipping stick with 20-pound line.

Rounding out the top 10 pros after day two on Kentucky Lake: 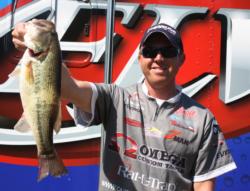 Co-angler Casey Martin of New Market, Ala., led both divisions in weight yesterday with a 22-pound, 12-ounce stringer, and his day-two 14-pound, 13-ounce limit handed him an incredible 7-pound lead heading into the final day of co-angler competition. His two-day catch totals 37 pounds, 9 ounces, a weight that would have put him in second place in the Pro Division.

“I didn’t get many bites,” he said of his day-two on-the-water experience. “My partner and I both struggled. I was blessed to have what I have.”

His 14-3 haul came from only eight or nine keepers that he caught on Picasso lures and an Omega football jig.

“Tomorrow I’ll catch whatever I can behind whoever I’m fishing with – that’s all you can do,” he said. “Hopefully I’ll be with somebody who’s on them.”

Martin will head out tomorrow with pro leader Moynagh.

In second on the co-angler side is Terrance Smith of Fishers, Ind., with a two-day catch of 30 pounds, 9 ounces. Behind him in third is Brad Roberts of Faubush, Ky., with 29-9.

Claiming the fourth spot after day two is Chad McClendon of North Richland, Texas, with a combined weight of 28-9. He is 1 ounce ahead of No. 5 co-angler Mark Myers of Cedar Falls, Iowa, who weighed in 28-8 over two days.

Rounding out the top 10 co-anglers after day two on Kentucky Lake: