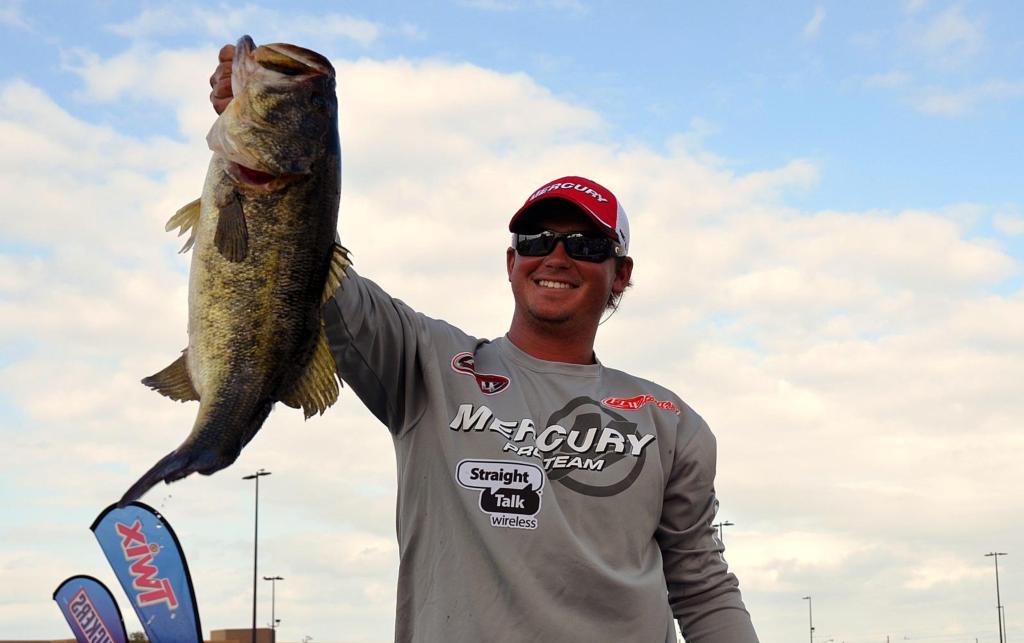 CLEWISTON, Fla. – The script couldn’t have been written any better. While rookie pro Drew Benton had a 1-pound lead heading into the final day of the Walmart FLW Tour opener, some of bass fishing’s biggest names, notably Brent Ehrler and Bryan Thrift, were breathing down his neck. Day four on Lake Okeechobee marked the second consecutive day of cooler, blustery weather and Benton was struggling and almost out of time. Then a 7-pound behemoth bit and the rest is history.

The fairytale ending sounds even better considering this was the first Tour event of Benton’s career. And the 7-pounder bit with exactly seven minutes left in the day, on a lure (Hildebrandt spinnerbait) he hadn’t previously used all week.

“I had been praying a lot this week and if that isn’t meant to be I don’t know what is,” said Benton. 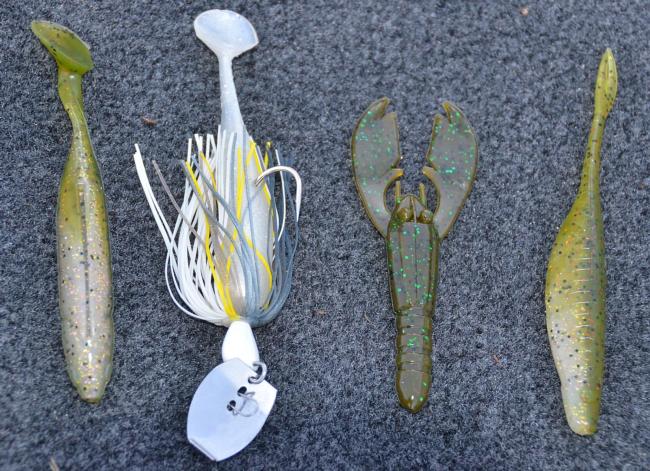 While Sunday was all about the late-day drama, Benton worked a solid one-two program for four consecutive days. Heading into the tournament, his goal was to be prepared for any weater conditions. At the EverStart Series event a month prior, Benton was off to a good start until a north wind shut his bite down on day two.

This time around, he located a productive prespawn area down in South Bay and he indentified some spawning bass in the more-protected Turner’s Cove. He would throw reaction baits (mainly a custom 1/2-ounce PMG vibrating jig with a Bass Assassin Die Dapper trailer) in South Bay and mix in a variety of lures, most notably the solo Die Dapper or a Bass Assassin Vapor Shad, in Turner’s Cove. When he sight-fished, he used a Texas-rigged Bass Assassin Pure Craw. As he push-poled around in search of new spawners, he would burn the Die Dapper over lily pads and throw the Vapor shad in more open areas. When it was real windy, Benton would opt for a Gambler Big EZ with its larger profile that would stir up the lake’s surface.

“I started today in South Bay, then went to Turner’s. Nothing was happening there, so I went back to South Bay and checked it again. I fished there for three hours and was only able to catch two keepers. So I ran back to Turner’s and was able to finish out a small limit of bucks by 1:45 p.m. I told the cameraman that I had to run back down and try and catch a big one. So I made the run to South Bay, and that’s when I got the kicker. Up until then, I really felt like I was letting it slip through my fingers.”

For the first two days of the tournament, South Bay, with its white-bellied prespawn bass, was the more productive area. But the north wind trashed South Bay for all of day three and most of day four, meaning Benton had to spend more time than he wanted in Turner’s. Today, the lone keeper that came from South Bay was the kicker. 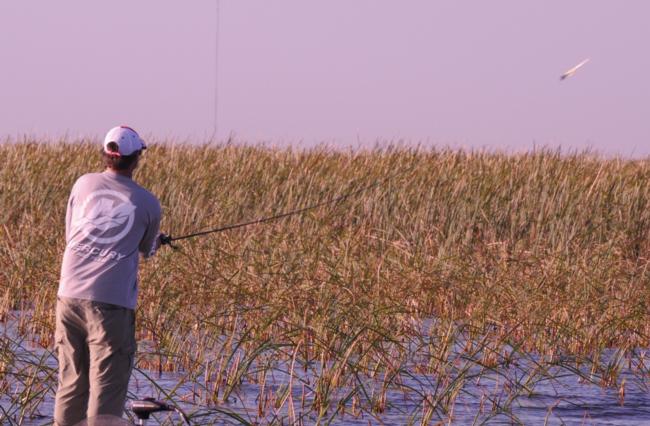 “The South Bay pattern was a timing deal,” Benton explained. “They needed the sun for them to move in from offshore. And they’ll move in and they’ll set up on them reeds out there. When that sun is out and they first move up, you can whack them really fast.”

Benton’s day-four sack officially weighed 13 pounds, 4 ounces. With a total of 75 pounds, 7 ounces, his winning margin was nearly 5 pounds. The 24-year-old will take a $100,000 check with him back to Panama City, Fla.

“This is such a big step for me. Now I can actually relax and fish for the rest of the year and not have to worry about just making a check. I can’t even describe this; it’s a dream come true. I can’t really put it into words.”

Ehrler has opened his tournament season in the state of Florida six different times. At each of the first five, the Keystone Light pro failed to earn a single paycheck, a stunning statistic considering his immense talent. On the sixth try, Ehrler didn’t just earn any check; he took home $35,000 for second place. And if not for Benton’s late-day heroics, the Redlands, Calif., native would be hoisting his fifth FLW Tour trophy.

Noticing some seagull activity early this morning, Ehrler cruised over to take a look. It turned out to be a great decision as a school of bass (and seagulls) was chasing and feeding on shiners. 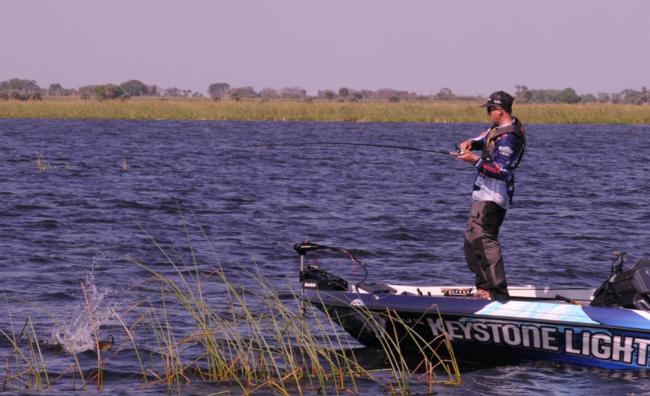 “For about 30 minutes straight I caught them nonstop,” said Ehrler. “If I didn’t catch them every cast it was every other cast.”

While the action was fast and furious, Ehrler only had about a 12-pound limit to show for it. While he upgraded a few times, he was never able to secure that kicker bite. His final-day limit weighed 14 pounds, 5 ounces, giving him 70 pounds, 8 ounces for the tournament.

“Today I caught everything but one on reaction baits. The one I caught flipping came on a Texas-rigged 6-inch Yamamoto Senko with a 1/4-ounce Tru Tungsten weight. But the Senko played a big role earlier in the week for me.”

Ehrler said he developed no real pattern as every day was different. When he wasn’t flipping to reeds, he would work the more open areas with a Phenix swim jig, an unnamed bladed, vibrating jig (with a Yamamoto swimbait trailer) or a Pepper spinnerbait. Ehrler spent most of his time in the Harney Pond-Bird Island area of the lake.

This was Ehrler’s 30th top-10 finish, but undoubtedly it meant more than usual considering his Florida history.

“I know for a fact that I was around the right fish and I had the opportunity to win this tournament. But coming in, I had a bad practice as usual and was just hoping for a check. I definitely surpassed that.”

Ironically, Ehrler isn’t sure he learned anything new about Florida fishing. While the lake not being dominated by mat punching certainly helped, he thinks he just stumbled on the right group of resident fish.

“I think if you come down here enough, you’re bound to finally catch them. It’s about time I caught them.” 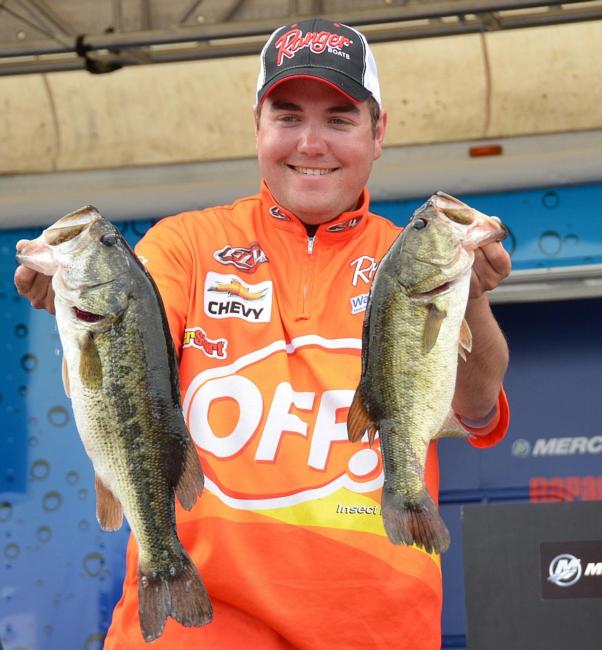 Dayton, Tenn., pro Michael Neal steadily climbed the leaderboard all week. He started the tournament in 22nd with a 15-pound, 7-ounce limit. On day two, he sacked his big stringer, a 22-pound, 12-ounce catch that brought him up to sixth. Each of the final two days he crept up a few notches with limits in the teens. Today his official weight for five bass was 13 pounds, 1 ounce.

Neal worked a unique program where he targeted areas that were adjacent to deep water. On Okeechobee, deep water is considered 5 feet or more. While he was working the outside edge earlier in the week, during the final round he moved inside from time to time.

“I fished the edge of a ditch in Eagle Bay Island, near the Kissimmee River,” said Neal, a junior majoring in computer science at Bryant College. “I was strictly throwing moving baits – a swim jig (1-ounce Strike King Hack Attack Heavy Cover) and swimbaits (Gambler Big EZ) around scattered grass looking for a reaction bite.”

Neal described it as a go-between area as the fish were either prespawn or postspawn. While certain portions were more productive, the entire stretch was roughly a mile long.

“The swim jig accounted for most of my big fish,” Neal said.

The second-year pro learned to work moving baits through the grass from Brett Hite, who he drew as a co-angler at the 2008 FLW Tour opener on Lake Toho.

“That was a crash course in grass fishing. I’ve taken that lesson and I applied it here this week.”

Say what you will about Wade Hendricks, but the man knows how to stick to a game plan. After 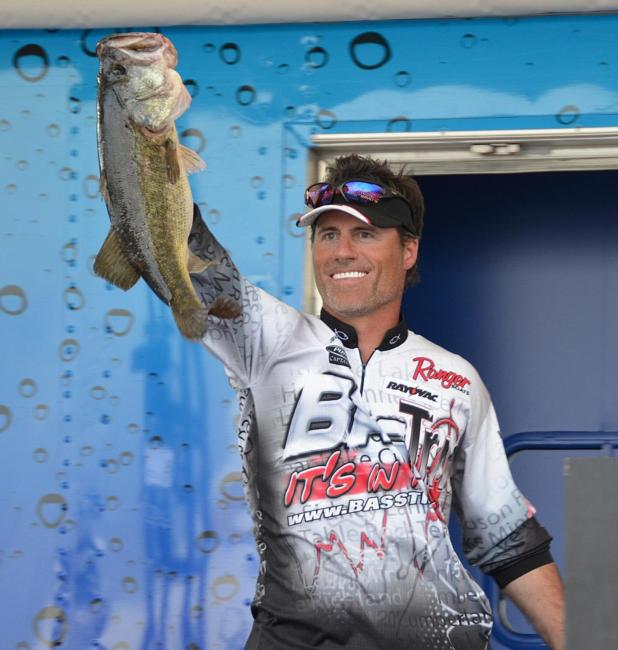 indentifying a productive prespawn area between Uncle Joe’s and Observation Island, Hendricks decided to put his Power-Poles down and meticulously pick it apart for four consecutive days, moving only 20 feet or so approximately every 10 minutes.

Early in the week, he caught most of his big fish on a white Spro Bronzeye Frog. But as the wind picked up, he was forced to flip a 1-ounce jig and Paca Chunk trailer. Today he caught his big fish almost right away, but then had problems catching quality afterwards. He finished the day with a limit weighing 12 pounds, 2 ounces, pushing his combined weight to 66 pounds, 13 ounces.

“The game plan almost worked,” said the Thompsons Station, Tenn., pro. “I had that kicker right away and I thought today was going to be stellar. I had some other opportunities this morning, but I missed a few fish and some were biting short on my jig trailer. All week long it was a mental challenge not to leave, but I kept telling myself there are game-changing fish here.”

While Hendricks never left his little 100 yard by 50 yard area, he did make an afternoon adjustment.

“At about noon today, I switched from a jig to a tube and I got a lot more bites that way. That’s how I filled out my limit at the end of the day.” 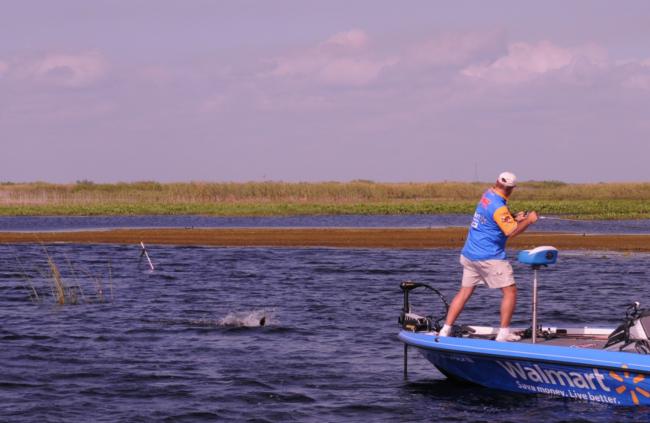 “My big-fish area was located in Fish Eating Bay,” said the Guntersville, Ala., native. “On day one the fish I caught were prespawn and on day two they were postpawn so I definitely think it was a transition area where they were coming and going to do their thing.”

Ultimately what did Cotten in was the blustery weather each of the past two days.

“The wind really got me, trashed my water. And I didn’t have many productive back-up areas. I learned this lake can humble you in a heartbeat.”

Cotten did the lion’s share of his damage this week with a custom 1-ounce jig and either a Zoom Super Chunk or a Paca Craw pitched to reeds. He was the only angler to crack the coveted 30-pound mark all week and he earned $20,000.

Rounding out the top 10 pros at the FLW Tour event on Lake Okeechobee:

The next FLW Tour event is slated for Smith Lake in Jasper, Ala., March 7-10, the second of six qualifiers.