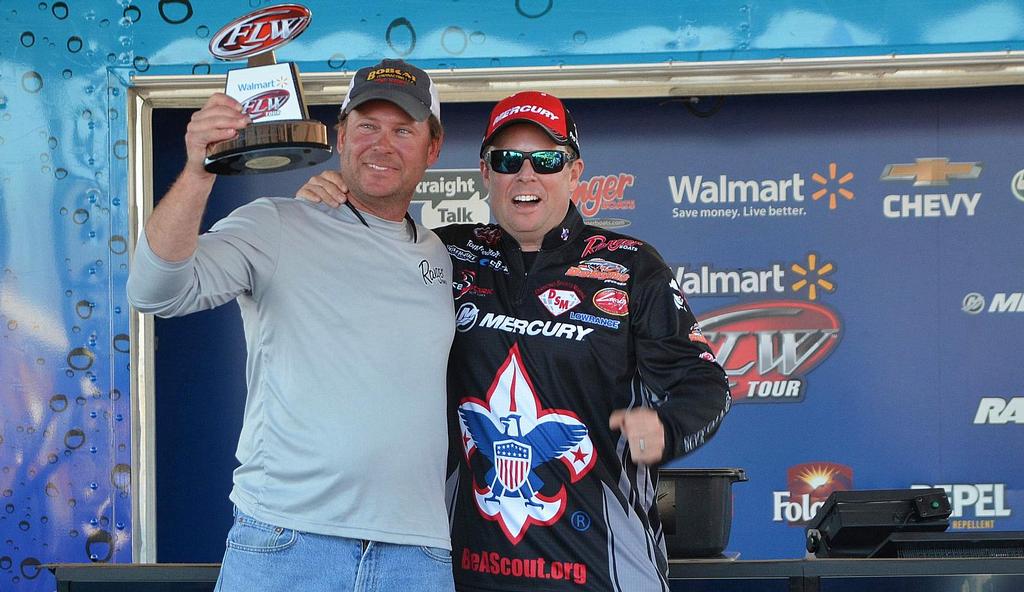 SENECA, S.C. – Despite being a Walmart FLW Tour rookie, David Redington was developing a reputation back home in Texas for starting bass tournaments with a bang. The only problem was that he tended not to back up those strong day-one weights. That trend followed him to the FLW Tour where in his first tournament he caught 14 pounds, 12 ounces on opening day at Lake Okeechobee. True to form, he only boxed two keepers on day two and slid down the leaderboard.

Day-one Dave caught them again at Lake Hartwell, opening his week in second place with 13 pounds, 11 ounces. But this time, he bucked the trend on day two and caught the heaviest co-angler stringer of the entire tournament – a whopping 17-pound, 13-ounce limit that had even the best pros in awe. He needed all of that weight because on a shortened day three (3-hour fog delay) he failed to bring in a keeper bass. His 6-pound, 10-ounce cushion was just enough to hold off hard-charging Todd Lee. 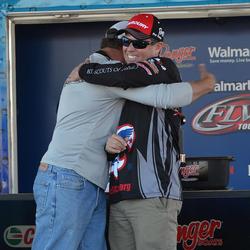 “When we came off the water, I thought there was no chance I won,” said Redington, the younger brother of FLW Tour pro and Lake Fork guide Tom Redington. “I was just hoping to stay in the top five. It almost doesn’t feel right.”

While brother Tom favors reading electronics and understanding the offshore game, the younger Redington prefers shallow-water fishing. Without any practice, he figured his best chance this week was to throw a big-fish bait and hope for quality versus quantity.

“Everything I caught this week was on a custom vibrating jig with a Lake Fork Live Magic Shad as a trailer. I have a buddy in Dallas that makes them for me and they are awesome.”

Redington used three colors on the vibrating jig – tilapia, watermelon red and white. His swimbait was 3 1/2 inches in length.

“The first day they were really smacking the jig. I would cast it out, let it sink to the bottom and slowly reel it in. On the second day they weren’t attacking the bait; my rod would just kind of get heavy. That 7-foot, 3-inch Dobyns Savvy Series casting rod was so sensitive. Anytime I felt the jig quit vibrating I knew I had one on.” 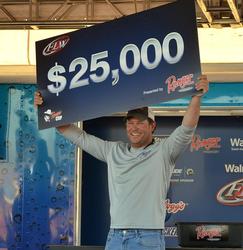 On day three, Redington threw the kitchen sink – from shaky heads to Scroungers to jerkbaits, and of course the Chatterbait, but nothing bit. Earlier in the week he only caught a handful of keepers each day despite the gaudy totals.

“I need to thank all of my pro partners, but especially Stacey King, my day-one partner. He probably had two limits of fish on the Chatterbait in the first 45 minutes. That showed me what I needed to be doing.”

The 39-year-old contractor will take $25,000 back to Texas, the host state of the next FLW Tour qualifier on Sam Rayburn. His total weight for the tournament was 31 pounds, 8 ounces.

“He’s worn me out from the back of the boat for years,” said older brother Tom. “I’m just glad he’s finally doing it to someone else.”

It’s never easy to come ounces from a major victory, but Lee took his latest second-place finish in stride. Lee is a two-time FLW Tour champion, has 20 tour-level top-10 finishes and has qualified for the Forrest Wood Cup a whopping 15 times. For all of Lee’s success, his last FLW Tour win came in 1998. He is still without question one of the best and most consistent co-anglers on Tour. 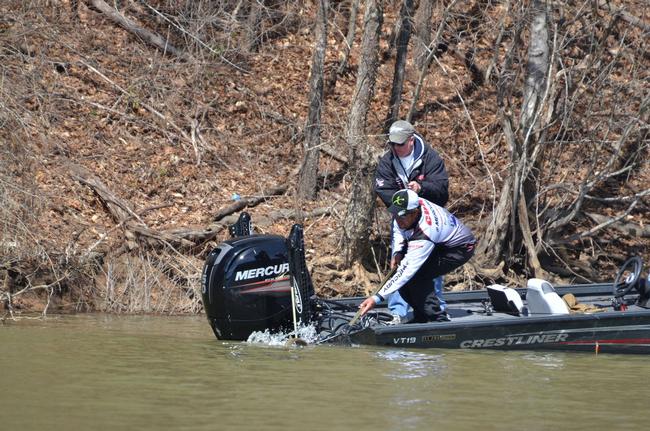 “I’m OK with it,” said the Jasper, Ala., fisherman. “I’ve fished with his brother Tom and he’s a super nice guy. I talked with Dave during the fog delay this morning and he’s a nice guy too. I’m glad for him, but I really would have liked to won.”

While Redington fished for big bites, Lee was on the opposite end of the spectrum playing the finesse game with little worms.

“I caught all of my fish this week on a drop-shot with a 6-inch Roboworm in morning dawn color. Most of the time I was fishing in water 8 to 14 feet deep. John (Cox) was fishing the backs of pockets and with the pressure the lake has been getting that little worm is hard to beat.”

Lee’s three fish weighed 6 pounds even, bringing his total weight for the tournament to 30 pounds, 15 ounces. At 11:30 this morning, he had fish No. 4 on, but had no idea at the time that it was the winning fish.

“I had a little 14-inch spot coming to the boat no problem. Right as John reached out to net it the hook popped out. The fish hit the side of the net and could have either fallen in or out, but it fell out. That hurts, but if someone would have said I would’ve finished second and earned a $7,500 check this week, I would’ve taken it.”

Bryan New is beginning to follow Lee’s footsteps as one of the better anglers from the back of the boat. The 2013 Lake Eufaula champion led day one on Lake Hartwell, but came up just short on days 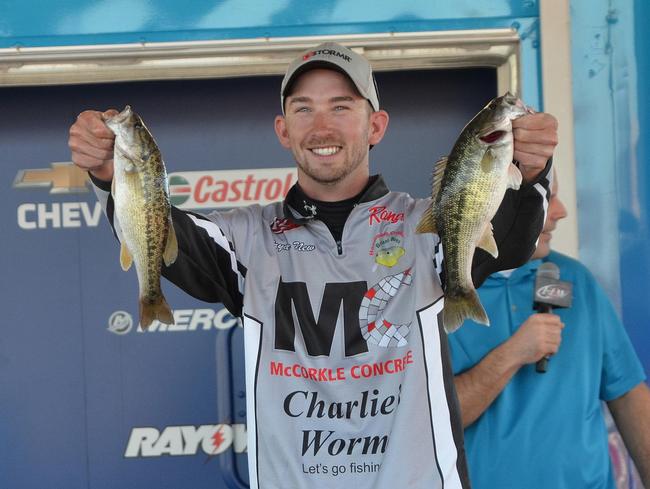 two and three. His four keepers Saturday weighed 5 pounds, 13 ounces and give him 27-4 for the week.

“I got six bites today,” said New, who finished fourth at the 2013 Forrest Wood Cup and fifth in 2012. “One got off because I didn’t get a good hook in it and the other one was so close to measuring, but I didn’t want to risk it. It would measure 12 inches on one side, but then I’d turn it over and it would be just short.”

The first day of the tournament New caught his fish deeper on a 3/16-ounce shaky head with a Charlie’s Worms finesse worm (pumpkin seed color). On the second day he fished a shallow flat and relied mostly on a rattlebait. Today, he went back to the shaky head while targeting brush under docks, but downsized a bit to an 1/8-ounce jig.

“I really believe that Charlie’s Worms has a unique scent that gets more bites.”

“When Redington caught the big bag yesterday I was sick. I did have a pretty good tournament, but anytime you make the top 10 you want to go for the win.”

Setzer, Cameron round out top five

While none of the 20 co-anglers caught a limit on day three, Braxton Setzer’s four bass weighing 9 pounds, 4 ounces was the biggest stringer of the day. The Auburn, Ala., fisherman finished the week with 23 pounds, 6 ounces – rising from 17th to fourth on the final day.

Rounding out the top 10 co-anglers at the FLW Tour event on Lake Hartwell: