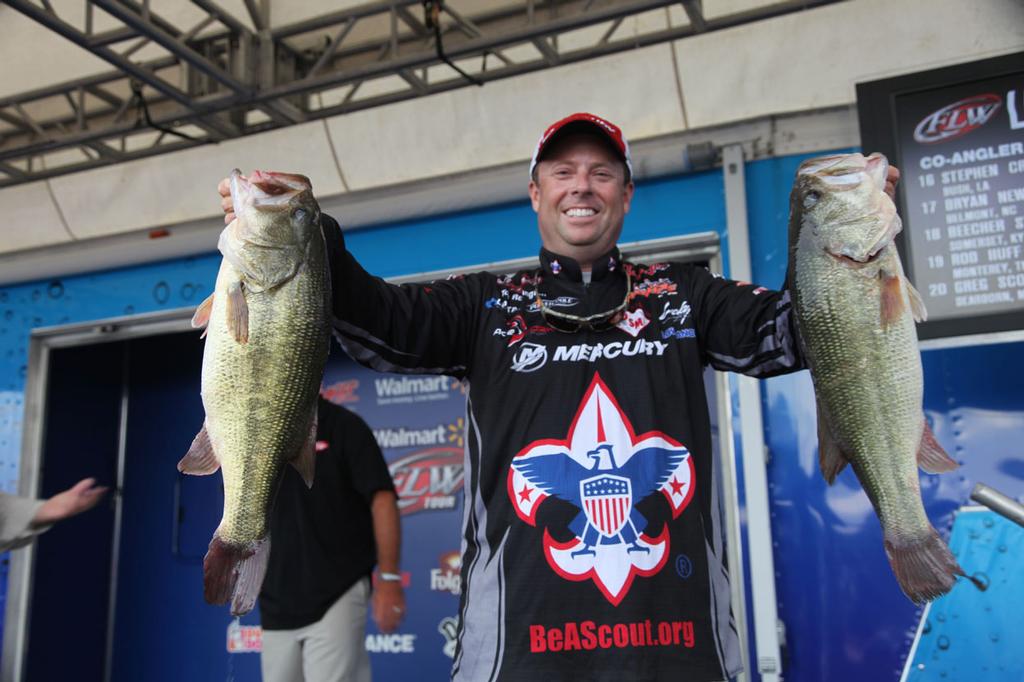 When the bass go into attack mode, so does Tom Redington. The Royse City, Texas, pro hammered a 24-pound, 9-ounce limit today at the Walmart FLW Tour event on Kentucky Lake presented by Evinrude and hosted by Henry County Alliance.

According to Redington, a midday front that swept across the area with high winds, rain and rumblings of thunder motivated bass to line up just how he likes them on the Tennessee River’s famous ledges. The result is Redington taking the tournament lead into the weekend with a two-day total of 46 pounds, 15 ounces.

“This ledge fishing is awesome,” Redington says. “There are fish all over the place. I ran a lot of new water today. Yesterday I had to work for them. I went to my best schools and caught one or two. When the storms rolled in, it was hammer-down time. The schools were in attack position, and they bit like they were supposed to.”

So what does “attack position” look like? For starters, it’s something that pros see on their depth finders. And it’s difficult for most of them to explain, but the best in the business – like Redington, Randy Haynes and Scott Martin – can recognize it when they see it. If they don’t see it, they don’t take time to fish.

Redington says that to him, when bass show up on his sonar in a pile, like a stack of hay, rather than appearing to be lined up “flat” across the ledge, that’s his cue that they’re in attack mode.

The only logical move to make is to go into attack mode himself. Today, Redington’s attack lasted almost two hours.

“You have to capitalize when the fish are going,” Redington says. “Yesterday I used a lot more finesse. Today, it was full throttle with big baits – power fishing.”

Redington scrapped some of the slower-moving lures and relied on shad-imitating tackle, as his fish were keyed on schools of the nomadic bait.

Tomorrow, he plans to hit a key spot that has been producing an early limit, then run-and-gun across the lake in search of bass ready to eat. If the sun shines and current slacks off, expect him to use finesse to defend his lead. But if Mother Nature presents feeding conditions, look for Redington to mount another high-power attack. 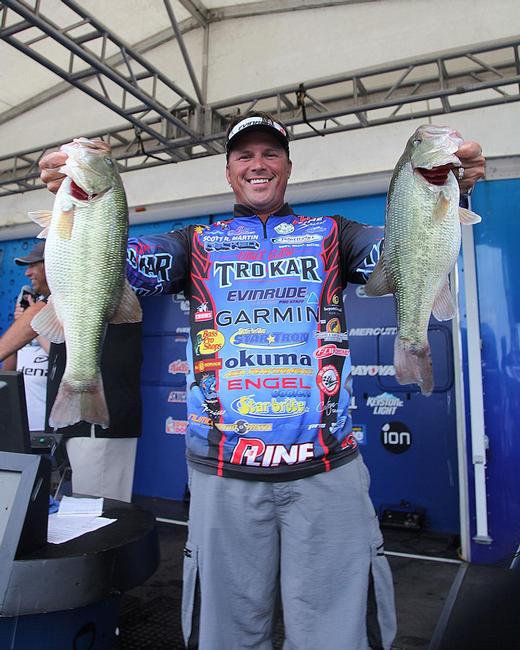 Scott Martin moved up one spot in the standings today with a 22-pound, 15-ounce limit. He’ll be looking to make a run at Redington, his friend and roommate at this event, on Saturday, and he has a game plan in mind that just might work.

On day one, Martin ran a row of spots from north to south. Today, he started south, worked north and then turned around and went back south when the afternoon feed turned on. He won’t waste that kind of time or gas tomorrow.

“It’s all about timing here,” explains Martin. “Current plays a big role. So does time of day. They seem to be biting a little better late in the day.”

Martin caught his key fish today late in the afternoon. He’s relying on a small selection of spots and hitting each one when it’s unoccupied by other anglers.

“There are not that many schools that are active down south,” Martin says, “at least not for me. I have maybe six or seven schools. I’m not getting a lot of bites, but they’re good ones.”

Martin is rocking 20 rods on the deck of his Ranger, rigged with assorted lures like hair jigs, spoons, crankbaits and drop-shots. He makes the switch from one to the other based on feel, and how he thinks his timing is shaping up.

“I rotate through some things, and when you get that dialed in, you’re deadly,” he says. 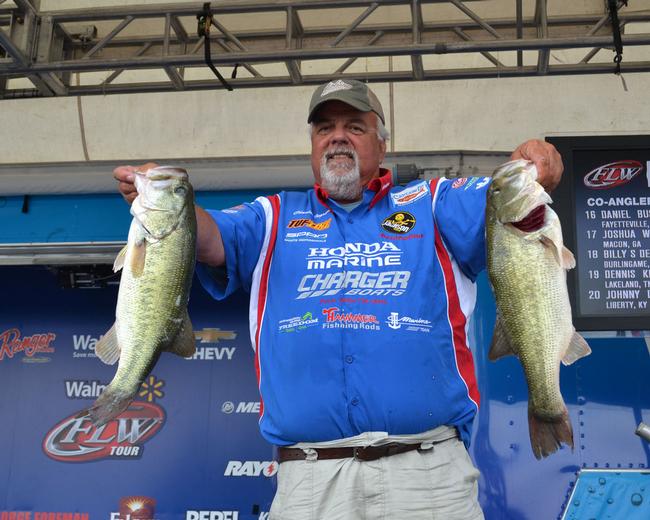 There was no change in the game plan for Charlie Ingram today. The Tennessee pro went back to his home-lake honey-hole and camped on it for the second consecutive day. It obviously paid off with a 22-pound, 10-ounce limit – his second 20-pound-plus stringer from the spot.

“That’s a big-fish place,” says Ingram, who’s starting to wonder if he’s pressured the school too much. “It took longer to catch them today, so I may have burnt them a little. I’d go an hour or hour and a half without a fish, then I’d catch two. I could see them on my electronics. They were down there, and all of a sudden they’d move up. They’d ease off, and then move up and feed.”

When the move occurred, Ingram capitalized on their feeding position atop the ledge with a Buckeye Lures 2-Part Jig or a swimbait. The duo produced another dozen keepers from Ingram’s favorite spot.

If the fish turn back on again tomorrow, several pros in the field have already commented that Ingram’s sitting on the best piece of real estate to win this tournament. But word is starting to get out among local anglers looking to capitalize on easy pickings. We’ll have to wait and see how they interact.

“Tomorrow we’ll have a lot of local traffic,” Ingram says. “This being my home lake, there was a guy sitting there today, and he saw me coming and left. That was really courteous of him.” 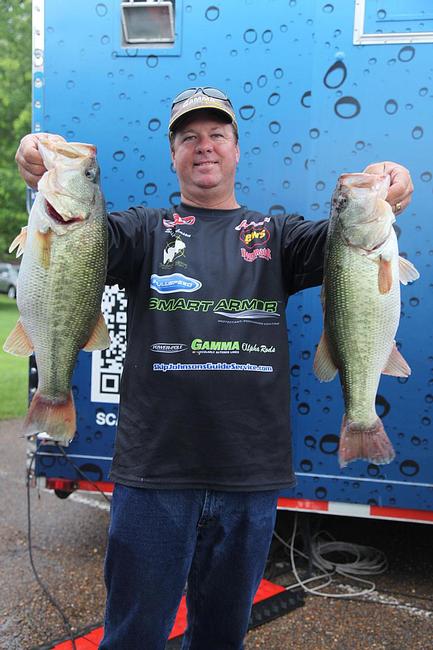 Yesterday, Skip Johnson fished his way into the top 10 by relying on a couple of key ledges in one larger area. Today, he went back to his best stretches, but the bass weren’t as cooperative at first.

“They weren’t holding on the same spots,” he says. “I had to move around a lot. I did more running and gunning.

“I started out really slow,” Johnson adds. “I caught a 4-pounder at 8 but didn’t have another 3-pounder until noon. There was a four-hour lull.”

Johnson needed until 2:30 to cull up to his 22-pound, 14-ounce limit, which was buoyed in the afternoon by a trio of 5-pounders.

Like Martin, Johnson is throwing the tackle shop at them.

“I had a junkload of rods on the deck,” he says. “I was running out of places to put them.”

He says a bit of boat pressure might have been part of the problem with his bass today, but his strategy accounts for any bass movement that pressure might create. Each school needs to be left to rest periodically, Johnson says, and with a pair of primo spots, he is hoping that he can bounce back and forth tomorrow and capitalize when each school is active. 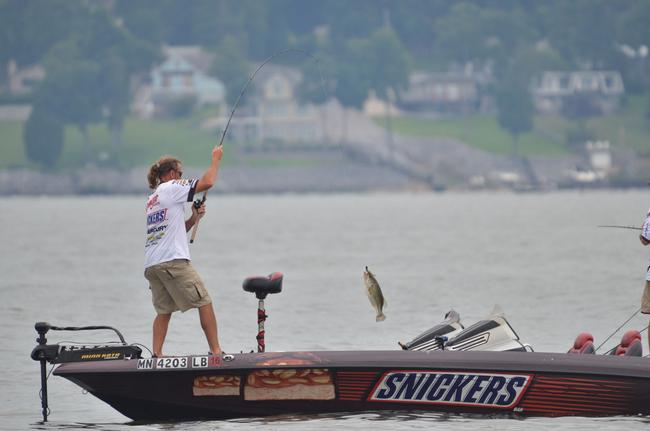 “I just feel like I don’t have it figured out,” he says. “The fish are there, but I’m fishing through so many that it bugs me.”

The “fishing through” means that Moynagh can see the bass on his depth finder, and he knows they can see his crankbaits, worms, jigs and swimbaits rolling by, yet they just won’t bite.

“I’m trying to hit as many schools as I can,” he says. “I’m learning. Some of these schools are disappearing. I’m learning which schools will hold up.

“Most of my fish are up and down the ledge a bit,” Moynagh adds. “I’m not looking to make a specific cast.”

Moynagh suggests that the key to his success is identifying the active schools and learning how to time their feeding periods. Sometimes he has to fish through smaller bass to get the bigger bites. Other times, he makes 10 casts and moves on. If he can finally nail down the exact timing that produces on a more consistent basis, he’ll be a dangerous man this weekend. 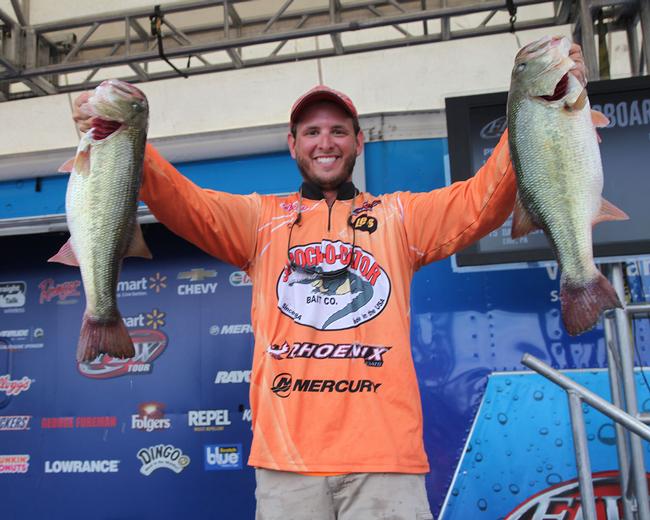 A slow start evaporated slowly thanks to a series of midday flurries for Cody Kelley, as he gradually put together a 21-pound, 2-ounce limit to take over the lead in the co-angler division.

“At 9 I had two fish, and it was little 10-minute flurries during the day,” Kelley says.

The Arkansan says he’s relying on a yet-to-be named new product from Croc-O-Gator, but he did reveal that a slow presentation was critical to catching fish behind his pro partner Brent Long.

“A lot of times out of the back of the boat you’re fishing for roamers,” Kelley explains. “So I think sticking with one bait is the key, especially when these guys are throwing a lot of stuff. I stuck with one thing all day.”

Kelley takes a 3-pound, 1-ounce lead into the third and final day of co-angler competition. Behind him in the standings is Macon, Ga., angler Joshua Weaver, who caught 19-15 today.

In Walmart FLW Tour competition, pros and co-anglers are randomly paired each day, with pros supplying the boat, controlling boat movement and competing against other pros. Co-anglers fish from the back deck against other co-anglers. The full field competes in the two-day opening round. After day two the field is pared to the top 20 pros and co-anglers. The co-angler competition concludes at Saturday’s weigh-in, and the top 10 pros continue competition Sunday, with the winner determined by the heaviest accumulated weight from all four days.

In addition to FLW Live, FLWOutdoors.com offers real-time updates from the water. Simply click on the tournament ID within the “On the Water” banner at the top of the FLW or Walmart FLW Tour home pages.