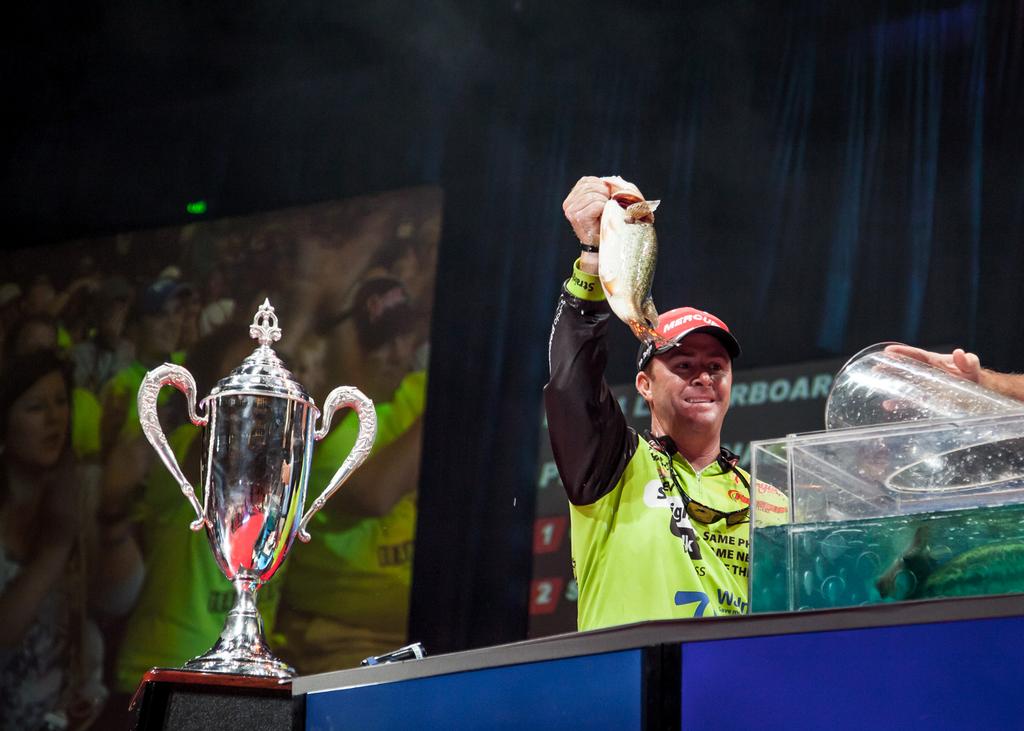 COLUMBIA, S.C. – Chevy pro Anthony Gagliardi achieved what had been considered by many to be an impossible goal here Sunday in bass fishing’s richest championship tournament. After disqualification from the season-opening Walmart FLW Tour event on Lake Okeechobee because of an inadvertent rules infraction, the South Carolina angler completed a five-tournament comeback in regular season to qualify for the 2014 Forrest Wood Cup. Finally, here before a standing-room-only crowd in Colonial Life Arena, Gagliardi capped off his comeback by winning the four-day test on Lake Murray, his home fishery.

For the complete story of Gagliardi’s championship victory, click here.

Here’s how the rest of the top 10 earned their share of the $1.2 million tournament purse.

Lost fish plagued many anglers in this event. It wasn’t the result of tactical errors or equipment malfunction. Rather, it was the combination of dense shallow cover that anglers were targeting and the propensity of topwater lures to score poor landing percentages.

That’s still small comfort to Straight Talk pro Scott Canterbury, who lost a 5-pound kicker that spit the hook on its way out from under a dock on the final day of competition. Canterbury’s Forrest Wood Cup chances disappeared with that fish as it swam away. The Alabama pro finished second to Gagliardi by 1 ounce.

Canterbury fished shallow all week, but spent most of day one and part of day two chasing a topwater bite around blueback herring in the lake’s lower end. It wasn’t a pattern consistent enough to win. However, midway through the second day, Canterbury found a more reliable program throwing frogs, soft-plastic toads, swim jigs, a Dirty Jigs pitching jig and a prototype Punisher Lures buzzbait around wood cover, brush piles and shallow schooling fish in the middle and upper parts of the lake.

“I ran new water every day,” Canterbury says. “I never caught a fish in the same place as the day before.” 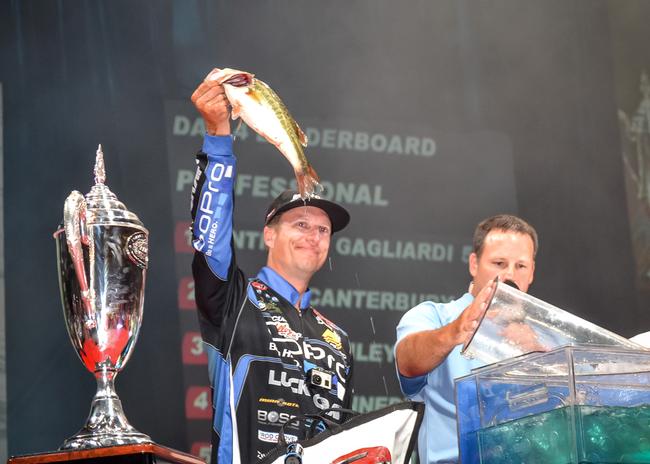 Brent Ehrler was one of the most consistent anglers this week. His tournament limits ran 13-5, 12-7, 13-5 and 11-10. The small drop-off on the final day set Ehrler back just enough for Canterbury and Gagliardi to pass him by less than a pound.

Ehrler targeted schooling bass on points in two key areas in the mornings with a Yamamoto D Shad soft jerkbait rigged on a weightless hook – occasionally opting for a double-jerkbait rig. He says he blind-cast in schooling areas, though he never caught a schooling bass that he didn’t see at the surface first.

After the schooling bite subsided, Ehrler shifted to brush piles with a drop-shot or into the shallows with a Lucky Craft Gunfish 115.

“I was fishing shallow grass and laydowns,” he says. “It seemed like the steeper banks were better, in main-lake pockets. The fewer docks in the pocket, the better because running reaction baits is easier when you avoid docks and can fish parallel to the bank.” 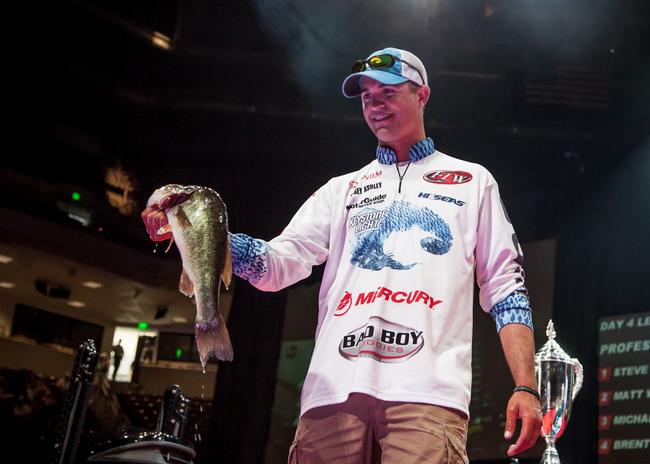 Casey Ashley came within a pound of the title Sunday night, even taking the lead for a short time at the final weigh-in until Canterbury bumped him by just 10 ounces. Ashley opened the tournament with a single approach on the first two days: pitching a Rebel Pop-R and buzzbait around shallow grass and wood cover. Cover that provided a blanket of midday shade was the best producer. The Achilles heel for Ashley was his inability to score a big bite the first two days, when he weighed in 9 pounds and 11 pounds, 14 ounces.

On days three and four, once Ashley’s shallow bass had been pressured with topwaters by many of the anglers in the field, he began each day with the same program, but rolled in a couple of secondary patterns up in the day. He flipped a Texas-rigged green pumpkin Zoom Trick Worm to dead willow trees in the backs of creeks, then shifted to deep brush piles, which he fished by dragging a redbug Zoom Ol’ Monster worm through the woody branches.

Covering as much water as possible was the critical factor in Ashley’s success. 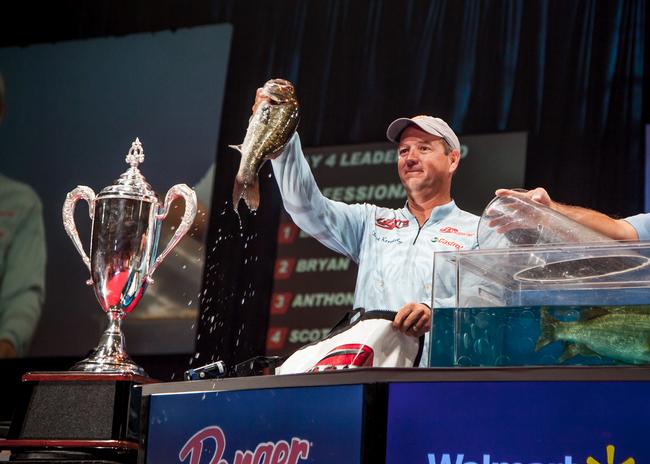 Auburn, Ala., pro Steve Kennedy was one of only a few anglers to dedicate his entire tournament to fishing the Big Saluda River, which is the primary flowage feeding Lake Murray. Their loss proved to be his gain. Heavy rains days before the Cup caused the river to back up into the miles of willows and laydowns that line its upper reaches. Kennedy’s interest in the area peaked when he arrived for practice and noticed that a mayfly hatch had occurred.

“Some of the trees near my campsite were covered in mayflies,” says Kennedy. “I watched a 5-pound-class fish eat mayflies, and I knew I needed to explore that.”

Due to falling water at the beginning of the week, Kennedy struggled early in the event with bags of 9-13, 9-15 and 10-9. By day three the water had stabilized. Kennedy got two big bites, but could only capitalize on one of them. By the final day the fish had adjusted to the lower water and put on the feedbag. Kennedy sacked the biggest limit of the tournament, tipping the scale at 20 pounds, 2 ounces, which nearly garnered the win for him. 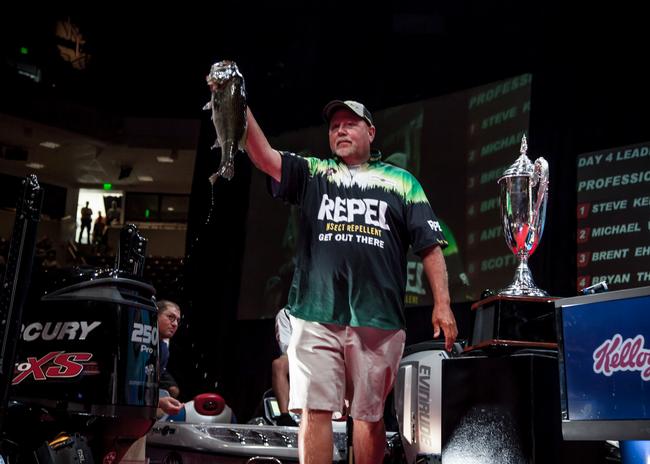 The Alabama pro consistently improved his weights throughout the week, bringing in bags of 10-4, 10-14, 11-15 and 14-15. Herren flipped a 6-inch green pumpkin worm with 14-pound-test Gamma fluorocarbon and a 3/16-ounce Elite Tungsten weight.

The biggest key for him was capitalizing on a small window between 11 a.m. and 2 p.m. when fish would set up on shade lines and feed. Most of his fishing centered on docks in the mid-lake area. Unlike a lot of the field this week – who found themselves having to run new water every day – Herren fished the same pockets from start to finish. 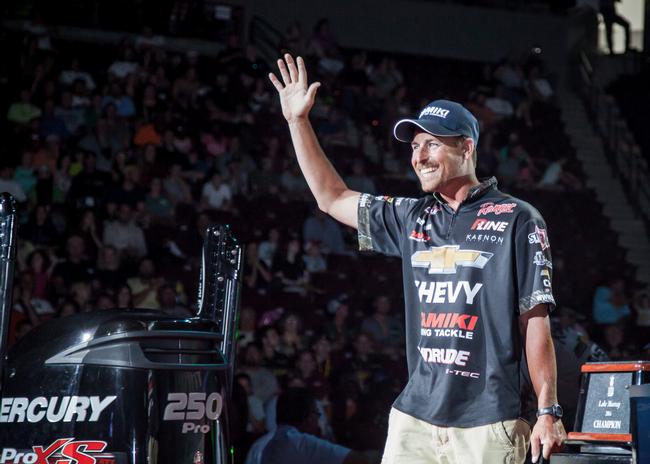 Bryan Thrift spent a good portion of time fishing in the back of Bear Creek during Cup week.

“I had one pocket back there [Bear Creek] where I caught probably 75 percent of my fish,” recalls Thrift. “The bite stayed good until about 10:30 or 11 each day, and after that I wouldn’t really get any good bites.”

His secondary pattern involved two spots that he mined with a Damiki DC 400 crankbait. One spot was up the Little Saluda, and the other was just north of Dreher Island. He left them alone on days one and three, but they salvaged his day two – when he weighed 10 pounds, 7 ounces. He caught more than 40 bass on day two and left them biting in case he needed the spot on the final day. After stopping on each spot Sunday, he couldn’t make anything happen and managed just three fish for 5-8. 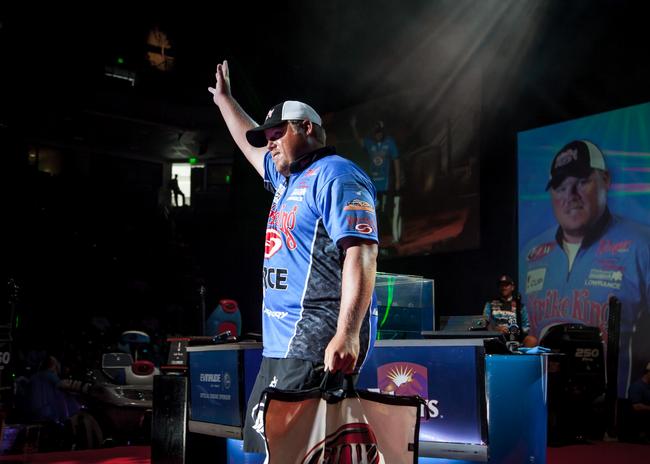 Collierville, Tenn., pro Michael Wooley sampled the shallow topwater bite that dominated this tournament, but he was never able to make it happen during competition hours. He did his damage fishing offshore structure with a Carolina-rigged Strike King Rage Hawg rigged with a 3/4-ounce Strike King Tour Grade Tungsten Carolina Rig Weight.

Wooley was able to sniff out a pattern reminiscent of the summertime techniques popular on his home system, the Tennessee River. But unlike his home waters, Lake Murray didn’t produce any large schools of bass. Of Wooley’s seven best spots, which were located between the Dreher Island State Park takeoff site and the dam, one gave up four keepers in a single day, and the rest gave up one fish here and one fish there. Wooley cycled through the milk run throughout the week for catches of 9-8, 14-12, 8-9 and 10-7.

“I would sit in 40 feet and throw to 20, dragging that Carolina rig very, very slowly, bumping off rocks,” Wooley says. 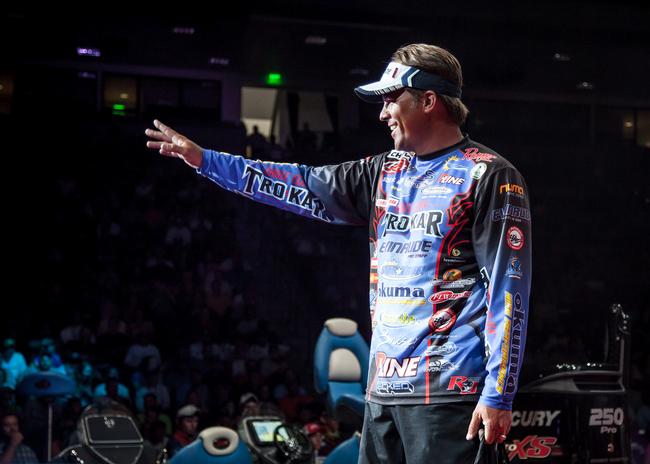 Scott Martin, the 2011 Forrest Wood Cup champion, opted to target fish chasing blueback herring. He started each day between Dreher Island and the dam, looking for schooling fish. Martin used a Bruiser Baits swimbait or Zoom Fluke to entice bass chasing herring to the surface. Having the right line was crucial, according to Martin, who used P-Line’s new X-Braid in 10-pound test.

After the morning bite settled he would run shallow cover – docks, grass and brush piles – around the mid-lake section. For this approach Martin would toss either a 1/4-ounce Buckeye Lures buzzbait or a Bruiser 10-inch worm.

“The biggest thing for me was to run new water each day when I went shallow,” says the Clewiston, Fla., resident. “I started fishing a lot of brush piles that I would mark for the first time while I was fishing. I was able to get some key fish from those that kept me in this tournament until Sunday.”

With little action on the final day by the dam, Martin was unable to put a limit together and brought one fish that weighed 3-6 to Colonial Life Area. 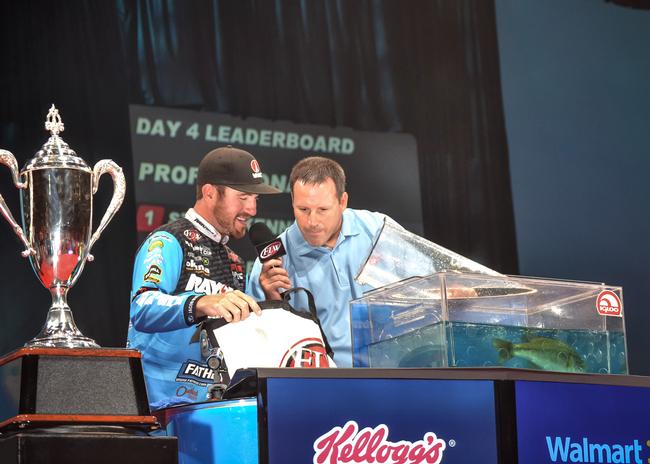 Rayovac pro and 2012 Cup champ Jacob Wheeler opened up this week’s tournament with a pair of solid limits – 12 pounds, 5 ounces and 11 pounds, 13 ounces, respectively. After making the top 20, Wheeler’s bite fizzled out on the weekend as he failed to break the 10-pound mark both days and brought in only one keeper on Sunday.

“Ninety-five percent of my fish came on a prototype buzzbait from Accent Fishing Products,” Wheeler says. “It’s designed for rigging with soft plastics.”

Wheeler rigged his buzzbait with either a Trigger X Slop Hopper or a soft-plastic toad.

“The key was to be able to get a reaction strike,” Wheeler says. “I had to bring it by quickly. I had to keep it coming.”

Wheeler covered most of the lake by running new water each day and caught his fish on docks and shallow wood, but grass sweetened many of his best targets.

“You could run wood all day, but it had to have shade when the sun was up,” he says.