Top 5 Patterns from the Cup Day 2 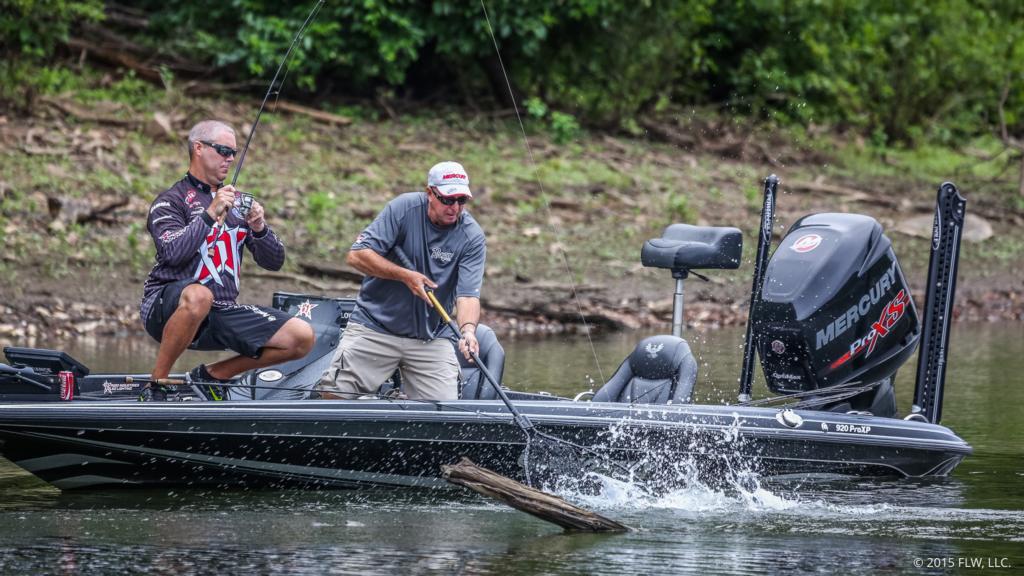 At times, bass fishing can be a lot like real estate, where the three most important rules are location, location and location.

The 2015 Forrest Wood Cup on Lake Ouachita presented by Walmart is starting to become a bit of a real estate game where location is the primary consideration in who climbs the leaderboard. And those mining the backs of creeks and tributaries are on the prime pieces of real estate.

Consider that after day two, four of the top five pros are concentrating their fishing efforts in the back ends of creeks or rivers. All of these areas fit a classic late-summer, early-fall pattern where shad pack into the back of creek ditches that meander through shallow flats.

Tournament leader Ramie Colson is working a couple of creek ends to catch a limit of bass before moving out to deeper brush piles.

Brad Knight (second place) and Brandon Cobb (fourth place) are both sharing the back end of a major creek for their catches. They are sharing it with Mark Daniels Jr. (eighth place) as well.

Chris Baumgardner (fifth place) is in the far reaches of another tributary and has it to himself. Only Jacob Wheeler (third place) in the top five is running schooling fish and wolf-pack patterns on the main lake.

Here’s a further breakdown of the second- through fifth-place anglers. 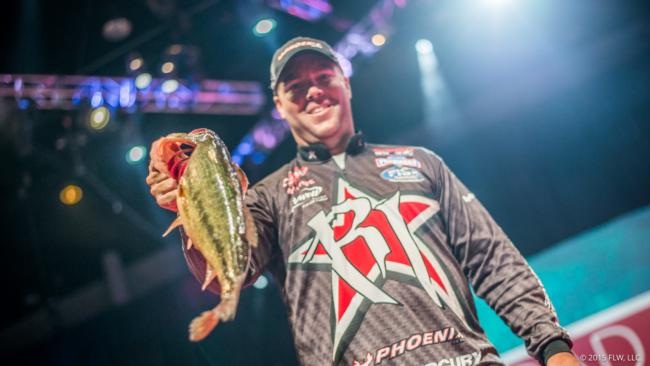 Brad Knight is fishing an area that quite possibly could have been the winning spot for the 2015 Forrest Wood Cup. But with two other anglers sharing the area and all three pros advancing to day three, it’s possible that the fishing pressure is going to choke it to death.

All three anglers have fished the area since day one, and everyone is respecting the others’ stretches. However, if one angler had had it all to himself, he would have been hard to handle.

“The area is the whole key; it’s loaded with fish,” Knight says. “I just wish I had it to myself. But that’s tournament fishing. These guys are going to find places like that. It’s got stained water, it’s got shallow wood, it’s got bait, it’s got bream, you can see fish busting – it’s a pretty obvious deal.”

Knight hauled another 14 pounds from the area today and plans to return tomorrow.

“They’re living back there, and the falling water might help pull a few more off the flats onto the cover in the creek,” he says. “The pressure is taking its toll. Yesterday I caught them on a buzzbait when they were more cooperative. Today I had to go to a drop-shot to get them to eat. They’re starting to wise up.” 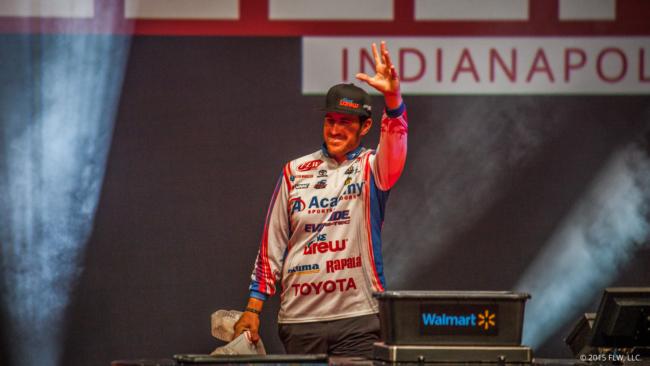 After leading day one, Jacob Wheeler slipped off the pace a bit today to third with a 10-pound, 15-ounce catch. He has a two-day total of 27-1.

Wheeler is dividing his time between suspended schoolers and running the bank for shallow bream eaters. In both cases he is throwing a Storm Arashi Top Walker. Today he spent more time on the bank trying to catch a quality fish.

“I lost several today that hurt,” Wheeler says. “I had at least three in the 3-pound class come off, and that’s the difference between bringing in 11 pounds or 13 pounds.” 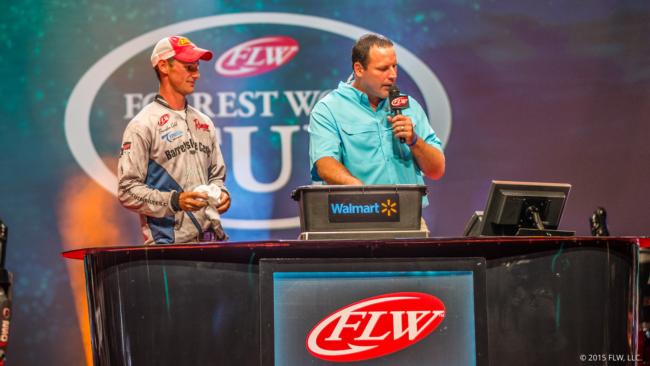 Brandon Cobb slipped one spot to fourth with a catch of 11 pounds, 2 ounces. His two-day total is 25-12.

As mentioned, Cobb is sharing a prime creek end with two other pros, including Knight. Cobb also believes that if one angler had the entire creek end to himself, he could contend for the Cup, but pressure might be the great equalizer.

“The back end of that creek sets up to a T like my home water on Hartwell or Clarks Hill this time of year,” Cobb says. “It’s a big flat with a ditch running out of it, and it’s full of bait and bass. It might be the winning place with one boat, but it’s getting beat up now so it might play out for all of us.

“I have other places to fish, but that creek is just a good place to get a few decent ones in the well early,” he adds. “I’ve got some brush piles and wolf-pack fish, but they’re not as reliable as that area we’re all starting in.” 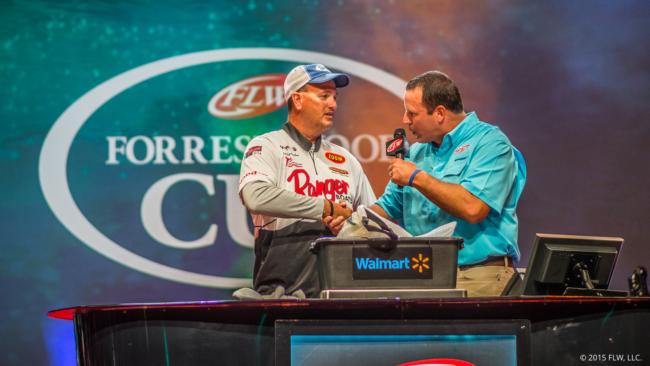 Chris Baumgardner moved up one spot to fifth place today with a 12-pound, 2-ounce catch for a two-day total of 25 pounds, 10 ounces.

Baumgardner, too, is fishing the shallow back end of a tributary and has the area all to himself. The only problem is that he thinks he might lose some of his prime real estate to falling water.

“I’m fishing a shallow flat with just a few pieces of wood and brush on it,” Baumgardner says. “The falling water has taken about a third of my area away from me since yesterday. If it falls anymore I could lose even more of my prime targets. I worked the area over pretty hard today, so I don’t know how much more I can squeeze out of it.”