Martin has 20 and is done for the day 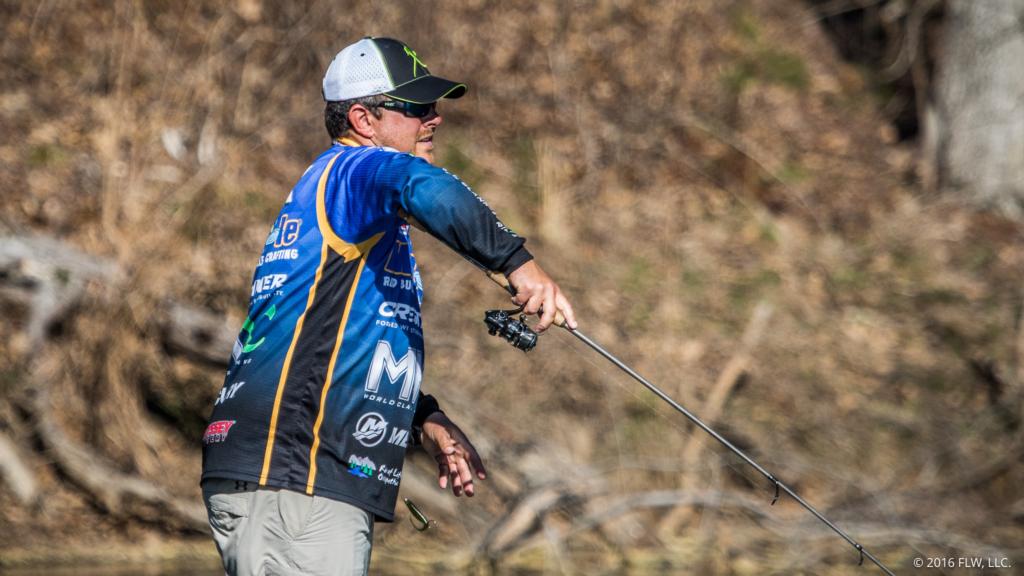 Our OTW crew is starting to trickle off the water now and there are still plenty of mysteries to be solved. There are for sure some big weights out there, but not everyone is accounted for. In particular, Brandon Cobb and Jayme Rampey haven’t been seen. Others, like Brad Knight, Bryan Thrift, David Dudley and more might well have big bags that will be revealed at weigh-in. For that, be sure to watch FLW Live at 3:00 p.m. ET!

2:00 p.m.: The General is on the prowl and the bedding bite isn’t the only deal going

Larry Nixon is nearly always on ‘em, and this time he’s doing something a little different than the rest of the field. Instead of fishing for the bedding bass, he’s working off a little deeper, perhaps in the vein of Blake Smith, and it seems to be producing pretty well for the veteran pro.

Scott Martin just checked in with the first 20-pound bag of the day (or at least close to 20). He’s certainly the unofficial leader at the moment and isn’t even fishing anymore, just running and trolling in search of fresh beds for day two. Though he might stop on something really special, it looks like he’s mostly concerned about setting himself up for the long haul. Last year, Martin built his AOY campaign off dominance in each bed-fishing event, he’s one of the best in the world when he can look at them, so this tournament is a natural fit for him.

Lake Hartwell has been pretty pristine all morning, with little to no wind and perfect conditions for sight fishing. Just recently, the wind has picked up and there are waves just shy of 1-foot lapping against the bank at Green Pond Landing. That could hurt the sight fishing some, but it might help anyone hunting a reaction strike or with an eye on making some prespawn fish eat.

One other note worth making is that nearly the entire field is concentrated in clearer water. The creeks with stain in them seem to be basically devoid of life even though the water is about 70 degrees in the dirtier water. 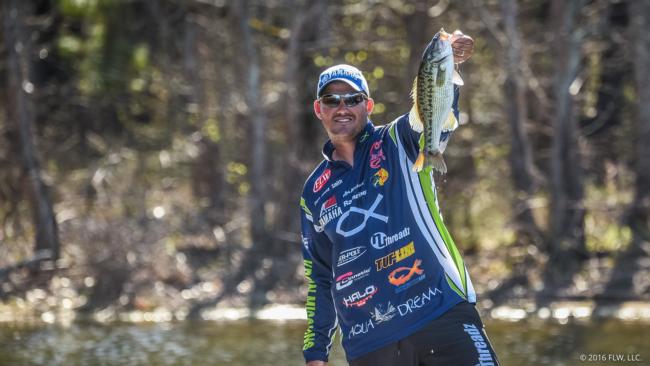 Right now, Hartwell is really showing out. The sight-fishing crew is on them big time in the clearer water and Matt Arey, John Cox, Shane LeHew, Clark Wendlandt, Chris Johnston and Andrew Upshaw all have more than 14 pounds.

Clark Wendlandt seems to think that the sight bite will top out around 18 pounds today, and that the leader will have over 20 pounds from some other pattern. He may well be right, but Chris Johnston is astounded by the number of bass that are moving up, so we’ll see.

Proving out Wendlandt ‘s theory is Capt. Blake Smith, who just caught a 4-pounder and is up to about 17-pounds. He’s fishing a little deeper and isn’t targeting bedding fish at all.

Also a little off the bedding bite is Jacob Wheeler, who’s boxed 14 pounds thus far and is mostly targeting docks. 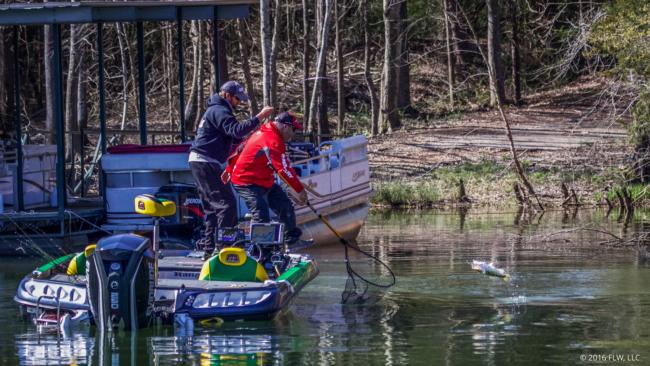 Bouncing from pocket to pocket with his trolling motor on high in pursuit of bedding bass, John Cox is doing his best to replicate Thrift’s breakneck style. It’s working well, though he’s left a few uncatchable big ones in his wake, Cox is likely up to 13 pounds with more on the way.

Still in the unofficial lead, Clark Wendlandt is bed fishing and just pulled a 3-pounder off a shallow brush pile to push him to about the 15-pound mark. Right with him is Matt Arey, who has only caught five, but they’re all the right ones. Additionally, Shane LeHew is just filled his limit with a 4-pounder off a bed that put him up to nearly 14 pounds.

Limits (or the best part of a limit) are rolling in left and right now. Notably, Blake Smith has a limit for about 10 pounds, John Cox has filled his and sits at about 12, Jonathan Newton has five small ones and Matt Arey has four for just shy of 10 pounds. Also on the board is JT Kenney, who as three for about 7 pounds.

It’s starting to get downright warm on Hartwell, and the sun is still shining bright and the water is totally slick. Thus, the sight-fishing bite is really starting to get going. It isn’t the only thing pros are focused on, but down in the clear water on the lower reaches it is certainly the dominant pattern. 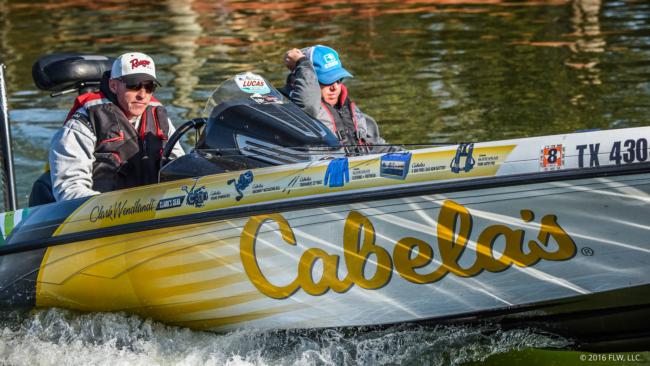 As usual, when there are shallow bass to be caught John Cox is on top of it. He’s got four in the box off beds and one of them is a 4-pounder.

Even better is Clark Wendlandt, who has a limit for about 13 pounds.

Right now, the fishing is getting good across the board, from pros chasing spawners to anglers simply running the banks or looking for schoolers, there are a lot of fishing to be caught.

We’ve got fish all over the place now, being caught with a wide range of techniques. Austin Felix has a pair of 2 pound largemouths and is working on a third on a bed, Tommy Dickerson plucked a good one of a dock, and Troy Morrow has three for about 7-pounds.

We’ve also had a little heartbreak too. From a 4-pounder off a bed one pro had to toss back because it was hooked outside the mouth to another big betting bass that spit the hook just before reaching the net. 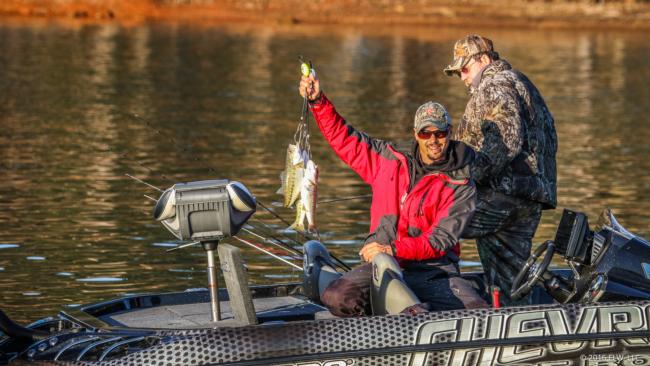 Things seem to be heating up on Hartwell. Alex Davis is on the board with three spotted bass, and he’s one of many up the Tugaloo.

As far as good fish, Jeff Sprague and Boo Woods each have one about 3-pounds.

We’re definitely seeing a mix of tactics going on. Though the stained water up the rivers hasn’t been super productive so far, we’ve got guys out throwing little stuff for spotted bass, Jay Kendrick throwing big swimbaits right near the ramp and plenty running the banks hunting shallow fish.

So far, things are slow on Hartwell, but that’s likely more a function of many pros ducking back in coves and looking for bass on beds than anything else. We’ve got a little bit of a crisp start, but the sun is getting up really nicely and the lake is still very calm. Perfect conditions for sight fishing.

7:30 a.m.: Shallow bass should be easy pickings on day one

The second stop of the Walmart FLW Tour at Lake Hartwell offers a chance at redemption for anglers who stumbled out of the gate at Okeechobee, a chance at a career-defining win for a stout cadre of locals and a chance to make another stride toward the Forrest Wood Cup for nearly everyone in the field. Practice for the event, which is presented by Evinrude and hosted by the Anderson Convention & Visitors Bureau, was characterized by unseasonably warm and sunny weather and a big push shallow by many of the bass as water temperatures rose into the low 60s.

The headliner of practice for many was a shallow spawning and staging bite that got better by the minute as the mercury climbed and the fish worked shallower. All over the lake, from the clear lower reaches to the stained rivers, largemouths and spots are beginning spawning rituals. From actually setting up on beds to staging close by on docks or in slightly deeper water, the springtime bite that pros such as Tracy Adams and Matt Arey adore is underway.

The big warm-up has broken up many of the winter and prespawn offshore schools that have led anglers to victory on Hartwell in the past, but the schools aren’t totally gone. Many spots and largemouths on Hartwell spend much of their lives offshore chasing blueback herring, and enough were caught deep in practice to assure some pros that there are still fish deep. How many, and how many stayed after the off day yesterday are mysteries at this point.

One wild card is the fact that at least a few of the bass in Hartwell have moved into the postspawn phase. With them, a few blueback herring are beginning to spawn in certain parts of the lake. It might be hard to tap into, but a pro that can figure out the postspawn bass or stumble into some fish relating to the herring spawn might have free reign to pursue the pattern as far as it can go. Though unlikely, it’s something to watch on a lake that has changed by leaps and bounds over the last week.

Whatever happens, everyone is predicting a good tournament. The bass are moving, accessible and biting, and 168 of the best pros in the world will be getting after it with a vengeance over the next few days. Prespawn, spawn or postspawn, it’s going to be a fun week on the Piedmont gem that is Lake Hartwell.

Sky: sunny, with a few clouds

Precipitation: no rain forecast until Saturday