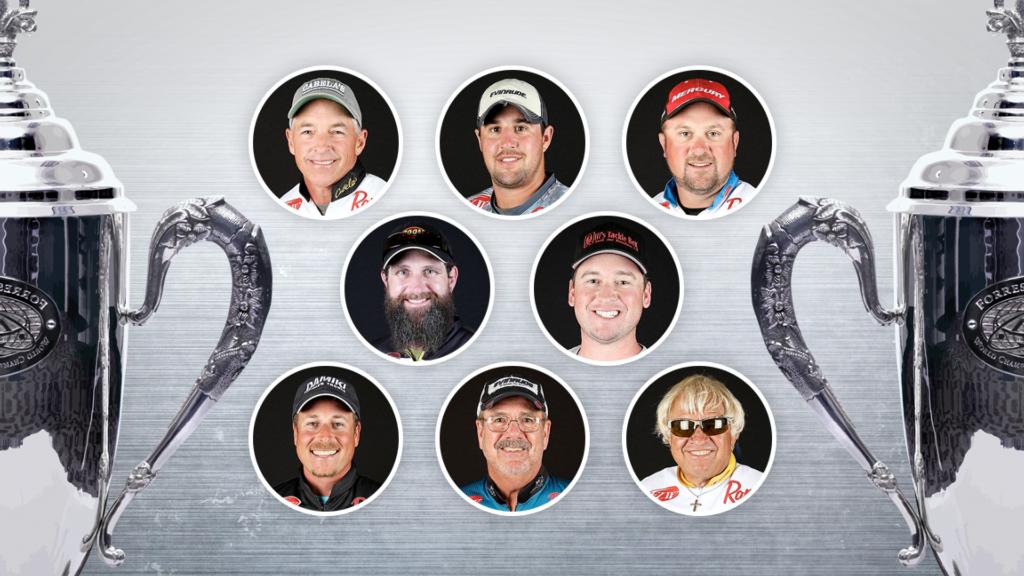 The 2016 Forrest Wood Cup at Wheeler Lake is still almost three months out, but in Walmart FLW Tour tournament terms, only two events remain for pros to earn enough Angler of the Year points to qualify for the Cup.

A lot is at stake, not the least of which is a guaranteed payday at the no-entry-fee tournament that ranges from $10,000 for last place up to $300,000 for first.

To make the Cup, the magic number right now is 36 – a Tour pro needs to finish the season in the top 36 in the AOY standings.

Per FLW Tour rules, the top 35 automatically qualify for the Cup, but additional invites are given when someone in the top 35 has pre-qualified for the Cup via one of FLW’s other tournament circuits.

As it stands, four Tour pros are pre-qualified: Charlie Weyer and Nick Prvonozac by way of the 2015 Costa FLW Series Championship, 2015 Cup champ Brad Knight, and 2015 AOY Scott Martin. Only Martin, who’s in 12th place, is currently situated above the 35th-place cutoff in the standings and is in a position to double-qualify. That makes 36th the cutoff.

Down around the cutoff, there are some big-name pros and a few anglers with experience on Wheeler who could change the outcome of the Cup if they can qualify. To better dial in on the Forrest Wood Cup “bubble boys” as the Tour heads into the final two stops at Kentucky Lake and Lake Champlain, I isolated the 20 pros situated just above and just below the 36th-place mark and added a few comments next to some of the more interesting ones. The number listed to the right of each angler's name is his AOY point total through four tournaments. Only 51 points separate the pros on this list.

Wendlandt probably doesn’t need to win the Cup to solidify “legendary” status in tournament fishing, but if he did win it, he’d absolutely go down as one of the sport’s all-time greats. The sad part is that Wendlandt was a lock for the Cup before Pickwick, when the Wilson Dam fiasco not only put his Cup hopes in jeopardy, but also cost him his shot at winning a fourth AOY. Maybe he exacts some revenge on Wheeler this summer.

Cory’s brother, Chris, and fellow Canadian running buddy Jeff Gustafson are in the top 10 in the standings and virtual locks to make the Cup. Cory would make it a Canadian trifecta if he can hold tight where he’s at in the standings, and he probably will. He and Chris both are favorites at the finale on Champlain, where they ought to be able to lock up their Cup bids. The Johnston brothers are considered among the best young guns in the game, so a rookie-season Cup qualification for each would validate a lot of opinions about their potential in this sport.

It’s David Dudley. What would the Cup be without the Walmart pro? He’s one of the sport’s best when it comes to tough summertime fishing, so he’s a threat to win Cup No. 2 every time he qualifies. Dudley is accomplished on the Tennessee River and Lake Champlain. Don’t expect him to slip up at the final two events and fall below the cutoff.

Newton’s hometown of Rogersville sits on the banks of Wheeler Lake, making him an instant favorite if he can get in. This would be Newton’s first Cup appearance since 2010.

Did you know that Meyer still hasn’t reached $1 million in career earnings, despite making every Cup since 2009? He’s never finished worse than 36th at the Cup and probably won’t this time if he makes it. And let’s hope he does, if only to guarantee an extra episode of Circuit Breaker.

Schmitt is your official bubble boy. He’s in 36th place and could go either way in the standings at the next two stops.

Bass-fishing superstar Bryan Thrift has made the top 10 at the Cup four years in a row but still hasn’t managed to finish on top, despite being one of the sport’s best closers. It doesn’t matter where FLW goes for the Cup, Thrift is always a contender. He’s made every Cup since 2007, but a 137th-place finish at the opener on Okeechobee put that streak in jeopardy. It looks like Thrift is going to battle his way back into contention. He’s 11 points back of Schmitt, who is currently the last man in.

We’ve said it before: Larry Nixon wants to win the Cup more than anyone else. It’s the only thing this legend hasn’t won. He’s come close: five top 10s and two 11th-place finishes in his 15 Cup appearances. Also, isn’t Wheeler where Nixon earned his nickname, “The General?” Think about the headlines ….

Upshaw narrowly missed making the Cup last year as one of the bubble boys whose bubble popped. He’s having his best year on Tour despite a bomb at Okeechobee. If he can recover at Kentucky Lake, where he’s made the top 10 before, and finish strong at Champlain, he’ll make it to Wheeler.

A tough tournament at Pickwick that resulted in a 140th-place finish really dropped Young in the standings. He’s a Tour sophomore looking to make his first Cup.

You know you’re rooting for Houston to make the Cup, and he’s got a great shot. The Oklahoma pro is only 21 points back of the cutoff.