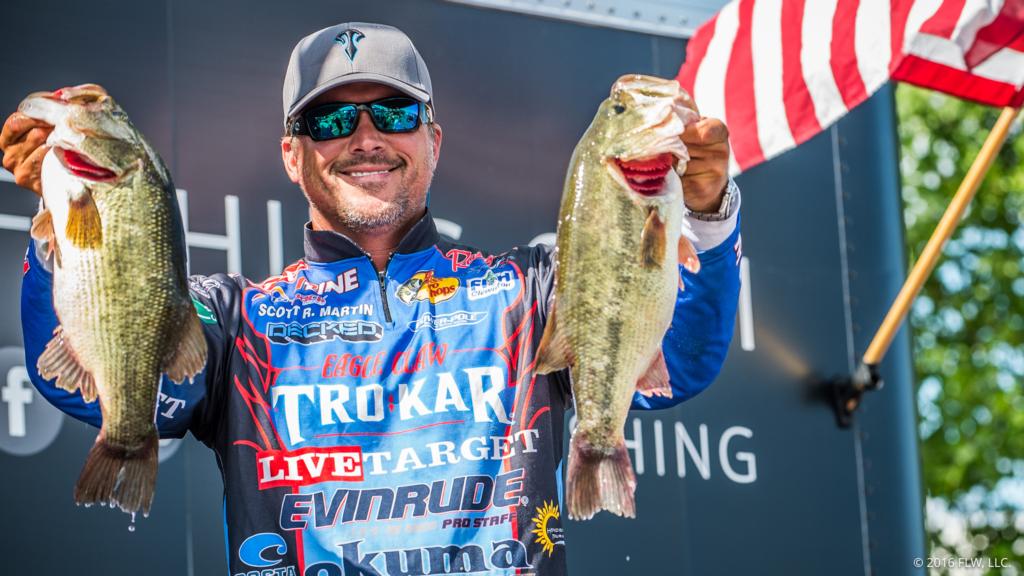 It has been a few years since the Walmart FLW Tour visited Lake Champlain, but it did not take Scott Martin of Clewiston, Fla., very long to reconnect with some familiar history in the north end of the “Sixth Great Lake” and catch 22 pounds, 5 ounces of largemouths to take the day-one lead this time around.

Martin’s familiarity with the north end comes from his FLW Tour win in 2009 on Champlain, when he tapped into an offshore largemouth bite for victory. Martin is fishing the same areas again, but has changed his bait selection.

“It’s a little different this time,” Martin says. “There is not as much grass covering stuff up. As a result, I’m fishing some different baits than I did last time.”

Martin caught about 15 bass on the day, with his biggest weighing 5 pounds, 1 ounce. He is fishing isolated cover out off the bank and believes the lower water levels this year might be helping to usher the postspawn largemouths out his way.

“There are a lot of fish up there,” says Martin, who also won a Tour event on Champlain in 2004. “It’s a great largemouth area because of the shallow habitat. I have a lot of good memories from it, and maybe I can make some more good memories this week.” 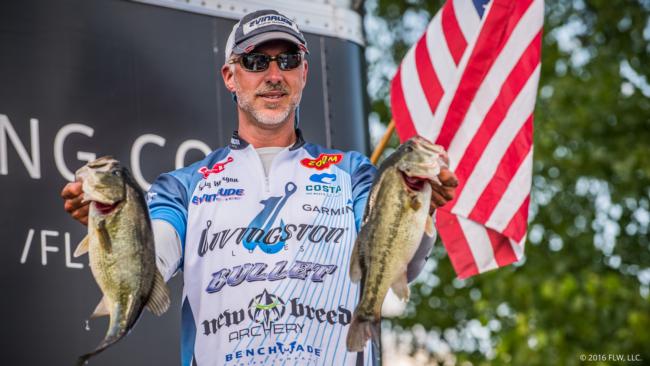 Andy Morgan came into the day looking to sew up the third Walmart FLW Tour Angler of the Year title of his career, starting the event with 896 AOY points, just seven points ahead of Jeff Sprague.

On day one, Morgan cracked 18 pounds, 2 ounces for 13th place, and Sprague fell back into 38th with 16-02. With only 2 pounds separating the pair, plenty could happen on day two, but Chris Johnston might end up complicating matters either way.

Johnston came into the event in eighth place in the standings with 864 points – 32 points back of Morgan. On day one, he busted 21-02 and sits in second place, which could be a game changer if Morgan falls off and Johnston can maintain his pace.

“I’m still on pins and needles,” says Morgan. “That was hard-fought to catch 18 pounds. I didn’t catch that many fish today. I got on one little deal for about 45 minutes and caught 3-pounders, and after that it went dead. I’m sticking with largemouths, but from what I can tell from weigh-in that might not be the best plan. I have one little area I’m saving, and if it fires tomorrow I’ll do fine, and if it doesn’t I’ll struggle.”

While Morgan might have some fish left in the tank, Johnston seems a good bet to stay on track as well.

“Hopefully I didn’t lean on them too hard,” says Johnston. “Going into this I knew I needed a top 10, so I leaned on them pretty hard today. One of the places I’m fishing I’m actually sight-fishing largemouths, and there are some big ones, but they’re not easy to catch. There are some fish left for sure, and I’ve got a few on beds that are out of the way, not big ones, but nice fish to start and get the pressure off. I’m gonna try to lean on them pretty hard tomorrow until I get 17 or 18 [pounds].” 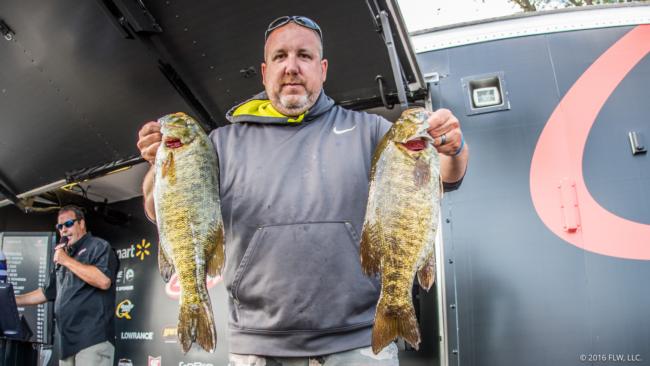 On a day when the vast majority of the fish catching occurred on the north end of Champlain, Al Gagliarducci of West Suffield, Conn., went right along with it and dropped an even 18 pounds of smallmouths on the scale to take the co-angler lead.  Gagliarducci fished the FLW Tour as a pro for six years between 2001 and 2007, but he’s now poised to see his biggest success come as a co-angler.

“I caught most of them just looking at them,” he adds. “When it got slick-flat I was looking around for light spots and throwing at them with a little jig, and that was about it.”

On day two, Gagliarducci is paired with Glenn Chappelear, who he says was fishing in a similar area as Wilson. Though the New England native has spent plenty of time on the water on the south end of Champlain, another strong day up north might just seal the deal.