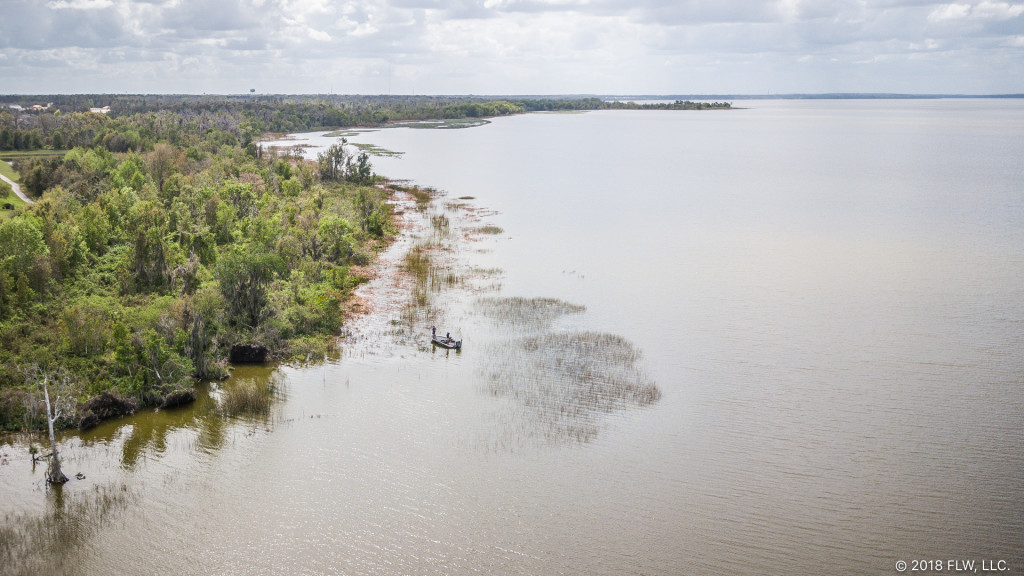 Each time a top-30 pro brought a big stringer of spawning bass to the scale on day three at the Harris Chain, it would look like the spawning program was becoming the game to beat in this week’s FLW Tour event, which is presented by Lowrance. But then another guy “fishing out” for prespawn and postspawn transition fish would weigh an equally impressive bag.

Overall, the pre-and-post pattern produced more top-10 finishes, but the spawn is on the mind of just about every pro who made the cut into Sunday’s final round. Tomorrow, we’ll find out if anyone targeting spawners can catch Ontario pro Chris Johnston, who leads for the second consecutive day thanks to back-to-back early morning flurries garnered by targeting offshore bass keying on the shad spawn.

Here’s how the rest of the top five made it into the top-10 cut. 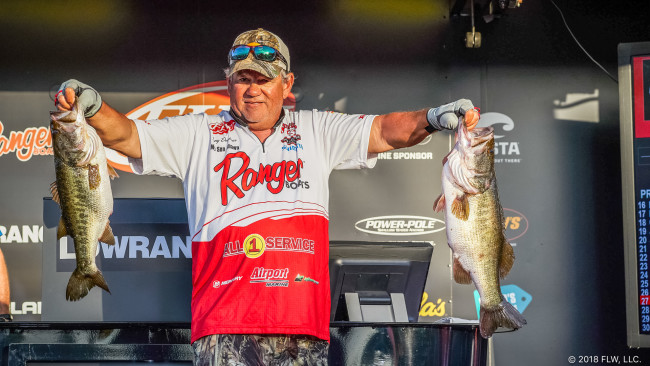 Tony Dumitras went looking with his electronics in practice, and everywhere he saw scattered grass along the edge of hydrilla he marked a waypoint. That search eventually led him to a handful of areas, including one key stretch of bank in Harris that he’s milked for the last two days to bring his three-day total to 61 pounds, 2 ounces.

Fishing 8 to 10 feet deep, Dumitras has done most of his damage with a worm. But today he had to make a change. He upgraded with a lipless crankbait and caught a couple of nice keepers on a small Keitech swimbait.

The change was necessary because the fish in his area are becoming less cooperative as some of them transition in shallower to spawn.

“They’re there, but they’re being stubborn. So if they move in, I’m gong to have to go after them. I know where their beds are.”

Still, the Georgia pro says he wants nothing to do with sight-fishing. He’ll try to find other ways to stay in the hunt if the fish move in tomorrow. 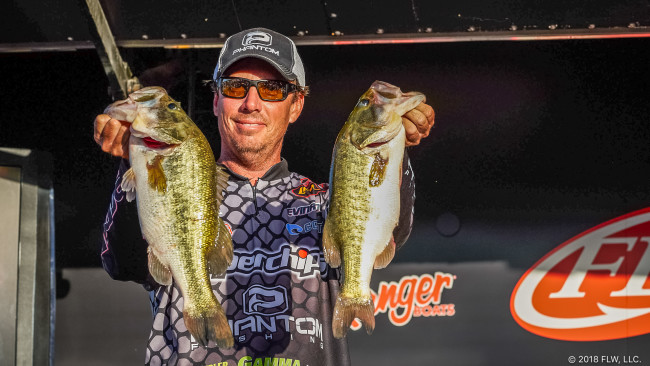 Florida pro Glenn Browne is doing everything he can to overcome having to miss the opening tournament at Lake Okeechobee a few weeks ago due to surgery to remove a tumor from his liver. Remarkably, he’s not only back out on the water, but he’s putting together a top-10 performance that could include a run at the win on Sunday.

“It’s been fortunate this one’s at home. I get to stay at home each night,” says the Ocala, Fla., pro. “This is my medicine. Getting out on the water is my medicine.”

A die-hard flipper and pitcher, Browne is using the big stick to catch spawning bass in Lake Apopka. The water in his best areas is too dirty for him to see the fish on beds, so Browne’s approach is to pitch to the base of reeds and other targets where he suspects fish have built their nests. He’s onto a pattern, and when he can find the right targets, the bites come quickly.

“I’m pattern fishing, and I’ve got to run new water. If I re-fish water where I already caught fish I might get a bite, but if I run new water I get a lot more bites.”

Because Browne is burning up about three of his fishing hours traveling to and from Apopka, he isn’t spending a lot of time scouting for new bedding areas. He’s primarily fishing a series of spots he located in practice. Today, he camped on one of those spots for about three hours. At one point, he caught three fish out of the same hole. With luck like that, he might be on the right program to outlast the offshore anglers currently ahead of him. 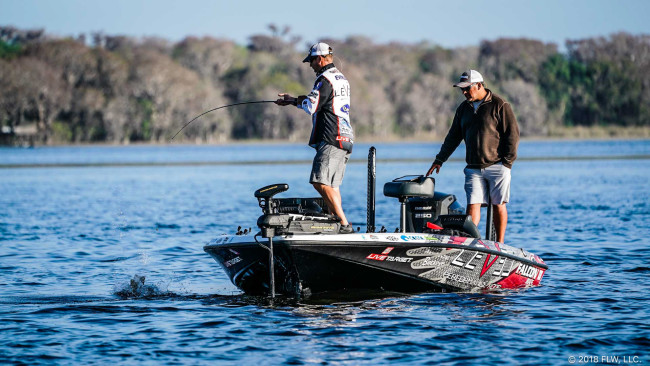 Anthony Gagliardi was in the offshore camp, but he made the top-10 cut today largely due to a changeup that led him into the shallows to fish for bedding bass.

Tomorrow, the former Forrest Wood Cup champion says either pattern is in play.

On day one, Gagliardi caught 22-7 offshore. He started off the same way on day two, figuring there had to be plenty more bass on his best spots, but he caught only seven fish and weighed in just 10-9. Today, he started offshore once again, but he wasn’t so stubborn.

“I wanted to try to catch those big ones [offshore],” he says. “I started there again today. In about an hour’s time I had about 13 pounds. I didn’t want to spend all day there again because I saw how tough it was the day before. So I went shallow and caught a 5-pounder on a bed, blind-casting.”

Gagliardi’s offshore fish are a mix of prespawn and postspawn.

“I think the pre fish are the ones that left. I think they’ve moved from where I was catching them. It’s just a little deep out there, and I don’t think they spawn out there.”

Tomorrow, he’s planning to fish a mix of deep and shallow, but he’s not made up his mind yet how he’ll approach the day.

“I may pull out there [offshore] again. You never know what’s out there. You stand a chance to catch a big one out there. I may do that in the morning before the sun’s up because I can’t sight-fish until it’s sunny anyway. Or when we take off in the morning I could just decide to go there [to his bed-fishing area] and just go fishing.” 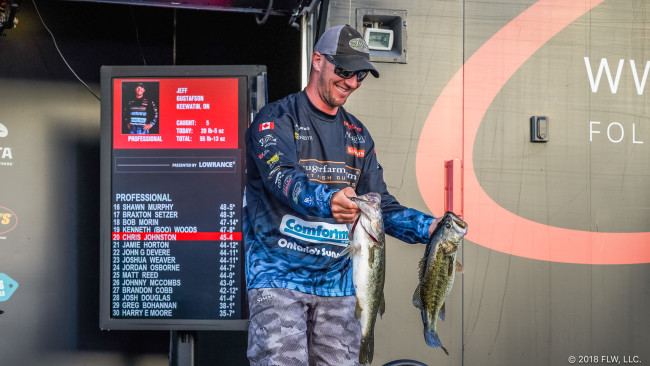 There’s nothing slow and steady about how Jeff “Gussy” Gustafson is fishing this week. The other half of the Canadian contingent in the top 10 is throwing reaction baits in hydrilla and catching a lot of fishing doing it.

Gussy’s catch today included both prespawn “chunks” and postspawn “skinny ones.” He’s not toying with bed-fishing for spawners.

“I’m fishing on Harris offshore,” he says. “My boat hasn’t gone anywhere near the bank, except a couple times to confirm that it’s not for me.

In the process of rotating through his spots two or three times per day, Gussy has noticed that the fishing is streaky. Little windows of activity open, and a spot that didn’t produce on the first stop might churn out nonstop action on a second or third visit.

“You’ve got to fish to find these spots,” he adds. “The best spots are ‘edgy’ – along hydrilla edges. But at one spot I caught them on today it was topped out.”

Like tournament leader Chris Johnston, who weighed a key late-day kicker from a pod of schoolers, Gussy is also on the lookout for surface activity.

“Today was the first day I’ve seen them busting,” he says. “At the end of the day I caught six fish in six casts.”