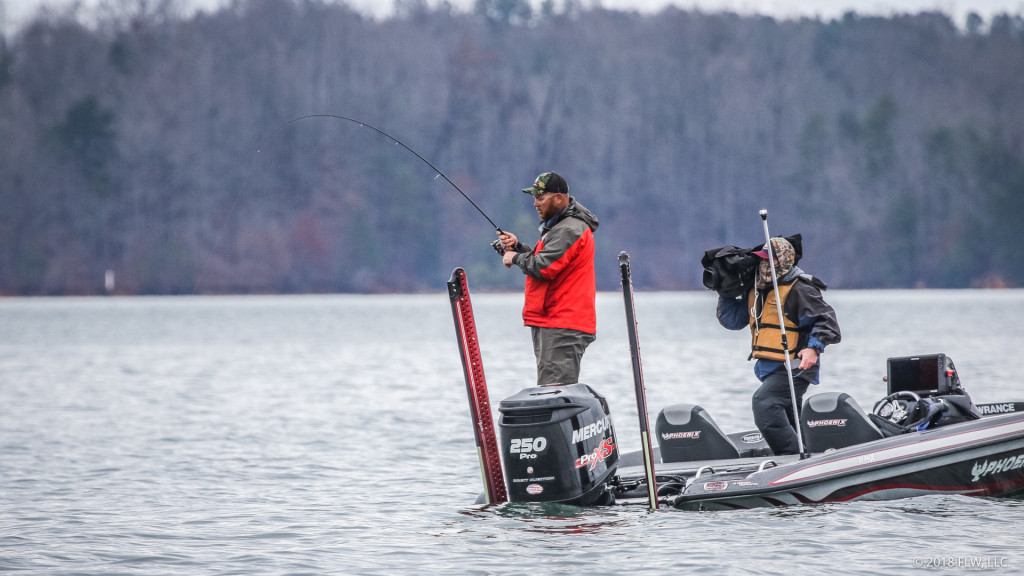 Bradley Hallman just made a slight cull, we’re talking ounces, but that might be enough. This weigh-in isn’t going to like when he won at Okeechobee – every ounce will count for him.

Check-in is at 3:30 p.m. and weigh-in starts at 4 p.m. ET, but not much is happening now. There’s plenty of time left for someone to get a game-changing bite, but right now it looks like Bradley Hallman will sneak out the second FLW Tour win of his career. Whatever happens, weigh-in should be pretty fun, there are some giant spots to be seen and someone is going to walk away with a check for $100,000.

1:37 JJ culls, Hallman is under pressure

The fish seem to be biting again. Jason Johnson just roped a 3+ and has culled up to about 17 pounds. He’s still shy of Bradley Hallman and Zack Birge, but he’s not out of it by any means.

Meanwhile, Bradley Hallman is starting to feel the strain. When he earned the win at Okeechobee in 2016 his final day was a fiasco that probably earned him a ton of gray hair. Now, it’s coming tough again, and he’s abandoned his docks in the lower end and moved back up the river.

Cody Meyer just got back into spotted bass hero mode with a 4-pounder. He’s got over 13 pounds now (and has caught 16 keepers on the day) and is unofficially sixth at the moment, just a touch ahead of a struggling Jeff Gustafson. 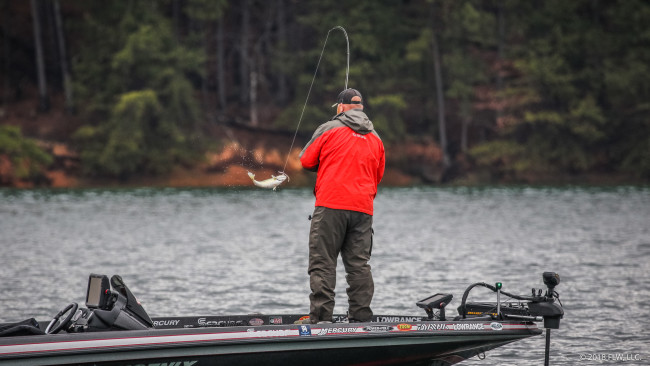 Cody Meyer is catching them pretty quickly at the moment, but they’re all pretty small. He’s culled up to a decent limit now, but he’s still lacking the big bites that put him into the top 10. Jason Johnson has been catching a fish on almost every stop he makes, but none of them have been that big or helped him – but he knows on this lake he’s just a cast away. Finally, Austin Felix has four in the boat now – none of them are too exceptional.

Zack Birge just culled again, but this time only by a couple of ounces. Incremental upgrades are fine, but one more really big bite would absolutely change the complexion of this derby.

Zack Birge just made his first cull of the day – replacing a skipper with a solid 2-pounder. With that, Birge has about 17 pounds in the boat and is unofficially less than a pound off the lead. It’s wicked tight.

It seems like we get a little bit of a lull at least once a day, and we’re in it now. Jason Johnson is running and gunning looking for big bites (he‘s mixing in a jerkbait a little in addition to finesse), Zack Birge is hunting a few more, and Bradley Hallman is docking it up in search of a final kicker.

Braxton Setzer just made his third cull of the day to get up around 12 pounds. He’s certainly finishing the tournament with honor. 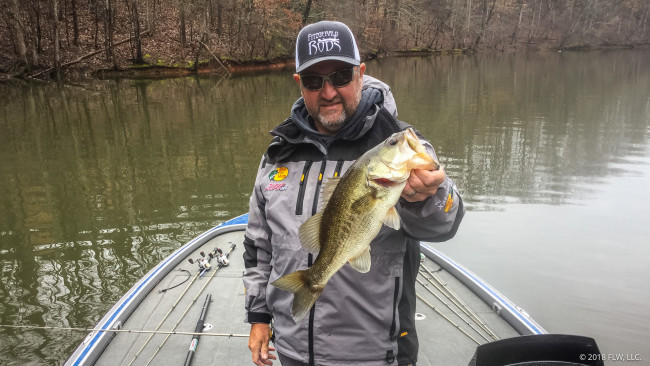 David Williams may not be in the running for a win, but he’s going to finish the tournament strong. So far today he’s got over 14 pounds, and he’s catching plenty of fish and finally a few largemouths.

Zack Birge has finally filled his limit with a small keeper. He has two that he needs to cull for a run at Hallman, but he’s banked a couple giants that are making that run possible. 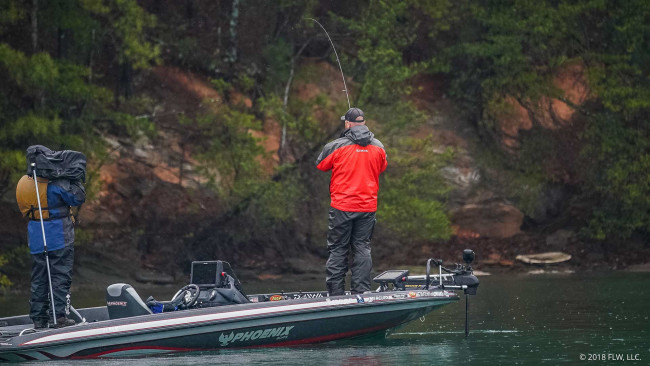 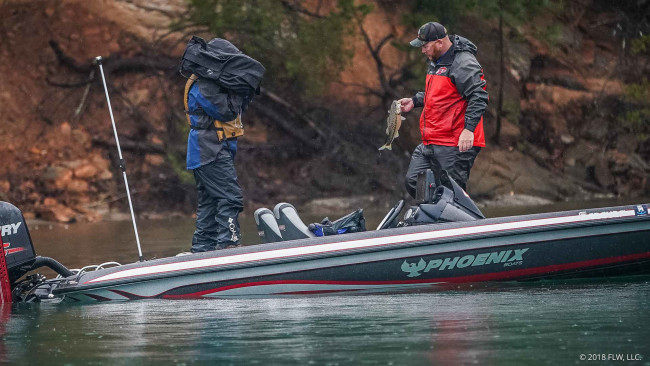 Jason Johnson popped another 3-pounder in the boat. He’s over 16 pounds now, and a couple of 4-pound bites would change the game for him. Though Bradley Hallman is doing pretty decent, JJ is putting in a heck of an effort to run him down.

As a side note, the rain has mostly stopped for the time being.

One possible good omen for Hallman is Zack Birge. Birge and Hallman are basically throwing the same bait, but in dramatically different places. If Birge can tempt the quality that he has, then it seems that Hallman could rustle a big bite or two on his swimbait as well. Hallman really only needs one big fish to ice this, and he’s in the part of the lake that has plenty of spotopotomusses now. 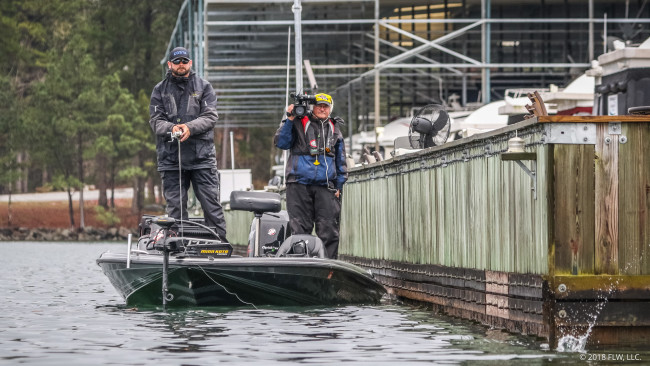 Bradley Hallman has finally abandoned the river and moved down into the clear water to one of the marinas that treated him so well on day two. It’s beginning to lighten up a little in places, but he’ll probably have to rely on something more than a shade line to get his fish to bite.

Joseph Webster is having a heck of a day – so far he’s caught like 15 keepers and has culled up past 16 pounds. He started about 7 pounds behind Hallman, so a win is probably out of reach barring something miraculous, but Lanier has the fish in it to make it happen. 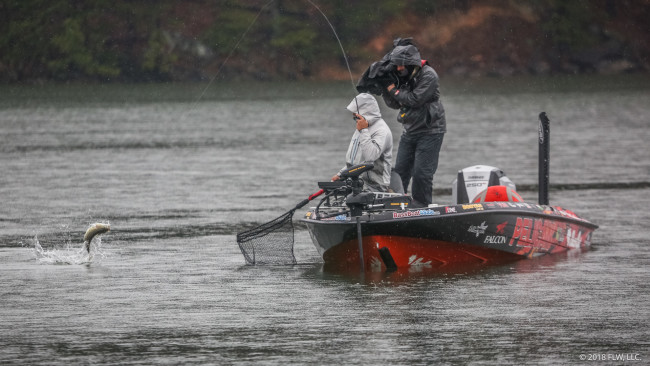 Zack Birge might be doing something. Fishing some new water on the final day, he’s putting a show on for FLW Live and just boxed up a 3-pounder and a small keeper to get up to four fish. With the size he’s caught he’s basically one or two decent keepers away from Hallman. In his words, he’s “working on a bag.”

Jason Johnson just put another 3-pounder in the boat. He’s rocking today and is in his element on Lanier, though he’d probably prefer slightly drier weather. Also, Bradley Hallman just culled up slightly off a dock – he’s still hanging around up the river. 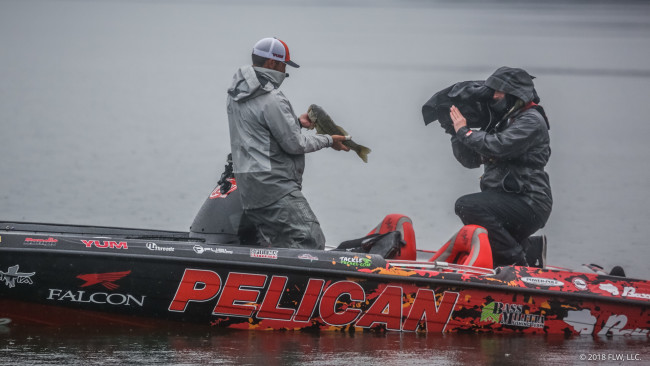 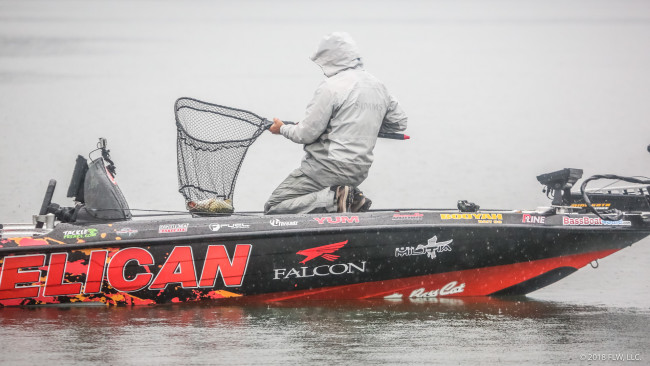 Zack Birge just pulled up to a new point, fired out his swimbait (a medium-sized electric shad-colored Keitech), and immediately caught a 5-pound spotted bass. That’s a giant, and now he’s got more than 9 pounds for just two bass.

Meanwhile, Jason Johnson is loading up on 3-pounders. He’s culled again and between JJ and Rob Newell there’s basically a finesse seminar happening on FLW Live at the moment. 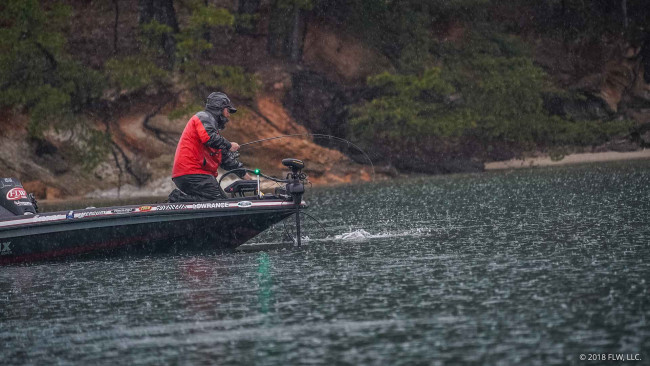 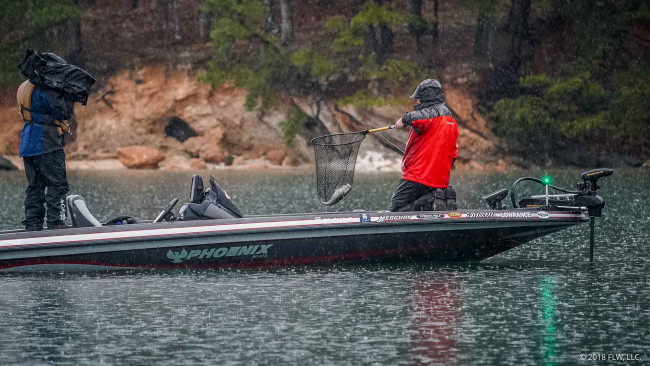 Jason Johnson just popped another 3-pounder in the boat. He’s got more experience on Lanier than the rest of the top 10 combined, and now he’s got more than 13 pounds in the ‘well. If he can really smash them today he might be able to take a shot at Hallman.

So far everyone in the top 10 has a limit besides Zack Birge, Jordan Osborne and Austin Felix. Sitting at zero, Felix has caught two non-keepers and he’s missing out on the catchfest the rest of the field is experiencing.

Jeff Gustafson has wrapped up his limit now and added another 3-pounder. He’s getting on a bit of a roll now.

Jason Johnson has wrapped up a limit as well now, adding a nice 3+ and then a small keeper to cap things off. 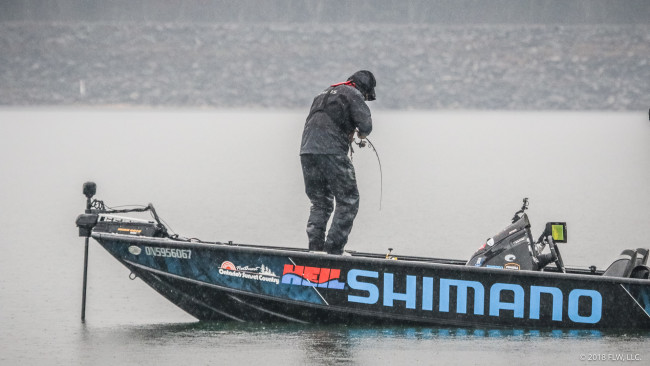 9:40 A good one for Gussy, Birge strikes

Jeff Gustafson just landed a 3-pounder. We’re not sure if he has three or four keepers, but a 3-pounder is what you want either way. He’s got a long day ahead of him and says he’s just now getting to his good stuff.

Zack Birge is on the board now as well – he just caught a big ol’ spotted bass on FLW Live on his little swimbait.

9:30 Hallman gets his limit

Bradley Hallman just landed his fourth keeper of the morning on a worm and followed it up with his limit fish. We’ve got them both as 2-pounders, and he’s almost up to what he weighed on day three.

Also, down the lake, Cody Meyer just wrapped up a small limit and Jeff Gustafson put his second in the boat.

Braxton Setzer just loaded a 3-pounder into the boat on a wacky rig and has four for about 9 pounds now. He’s off to an excellent start.

Jordan Osborne is also going well, and he’s got three decent keepers in the boat to start things out.

9:00 Hallman is closing things down

Bradley Hallman just put another 2+ largemouth in the boat on a spinnerbait. He’s adjusted masterfully all week and has basically done a complete 360 from his day three.

8:55 Birge is changing some things up

Zack Birge has struggled a bit so far today and doesn’t have a keeper in the boat yet. After running a few of his usual points, he’s now picked up a bigger swimbait and is fishing some docks. 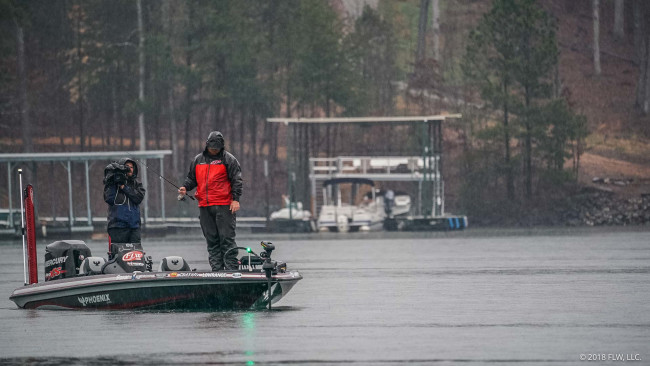 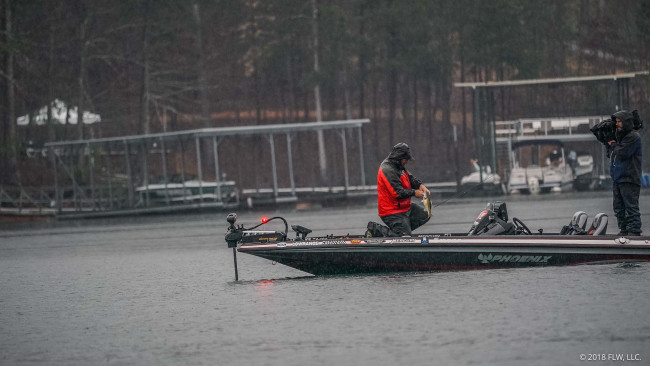 Jeff Gustafson is video gaming in the lower end and has one small one in the boat so far. Jason Johnson has three now, but his third was smaller than his first two. 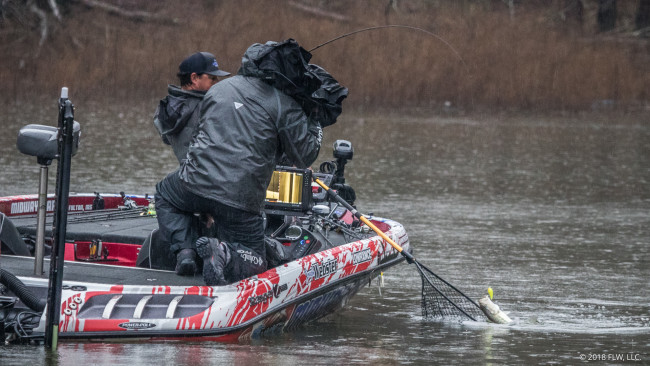 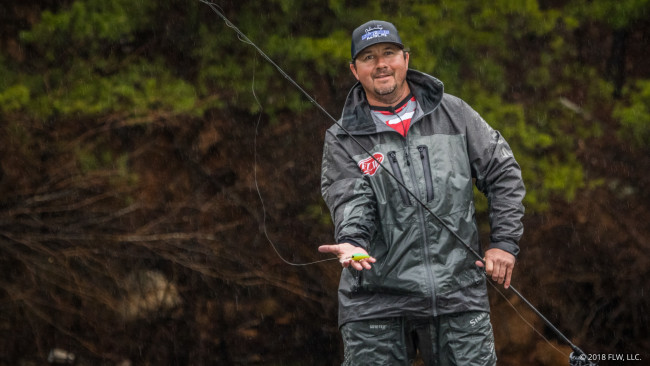 Joseph Webster wrapped up his limit and is over 11 pounds. He needs some quality fish or a real stumble out of Hallman to make a run at the win, but he’s basically in the lead for now.

Joseph Webster has been slinging a crankbait so far and just put his fourth keeper in the boat. It’s no surprise, but they’re biting in the rain this morning!

David Williams has done some work this morning. He just filled out a limit at light speed and finished it off with a 3-pounder. He’s skipping docks with a jig and tossing a jerkbait and has over 10 pounds in the boat before breakfast.

Still slinging a spinnerbait, Hallman just put another bass in the boat. He’s up to two keepers now, and he’s done it very quickly.

Also with fish, Braxton Setzer just put his second in the boat, and Cody Meyer and David Williams each have one.

Changing things up from his usual run down the lake, Bradley Hallman has gotten squirrely and popped into a creek just down the lake from takeoff. His first fish was a 2-pounder and it ate a spinnerbait.

Also fishing near takeoff, Joseph Webster has put three decent ones in the boat quickly. Down the lake, Jason Johnson landed one on his first cast and has a pair of good ones already. 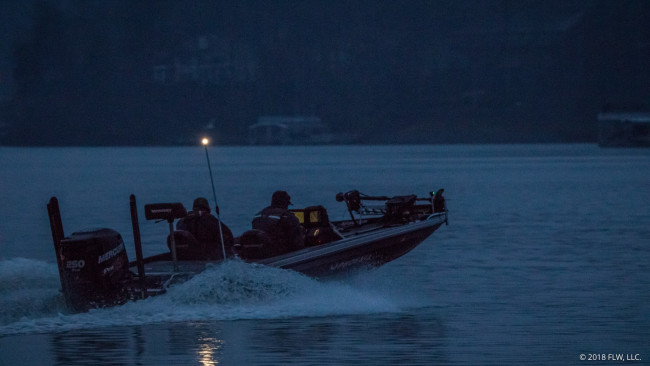 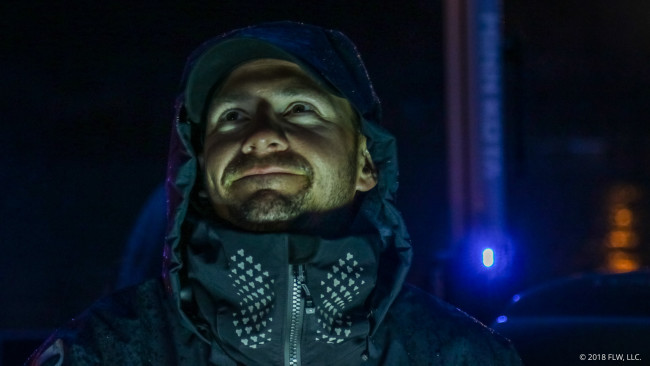 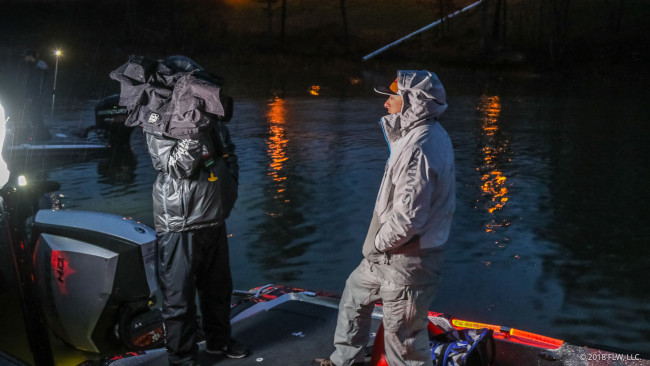 The final day of the FLW Tour presented by Ranger on Lake Lanier has kicked off under very soggy condition’s. The forecast calls for rain basically all day, so the pros will have yet another challenge thrown at them. Heading into the day, Bradley Hallman has a big lead, but it’s not insurmountable. Hallman’s weights have fallen each day, and the folks chasing him down have some momentum on their side. Though Zack Birge is closest, the most confident anglers are Jason Johnson and Jeff Gustafson. Gussy caught a pile of fish on day three and knows where they live, and Johnson lives on the lake and now has one more day to lean on his local knowledge.

Regardless of the weather, it should be another good day of fishing – Lanier has showed off all week, and the spotted bass love to eat in the rain.