The spawn is almost on for largemouths and smallmouths 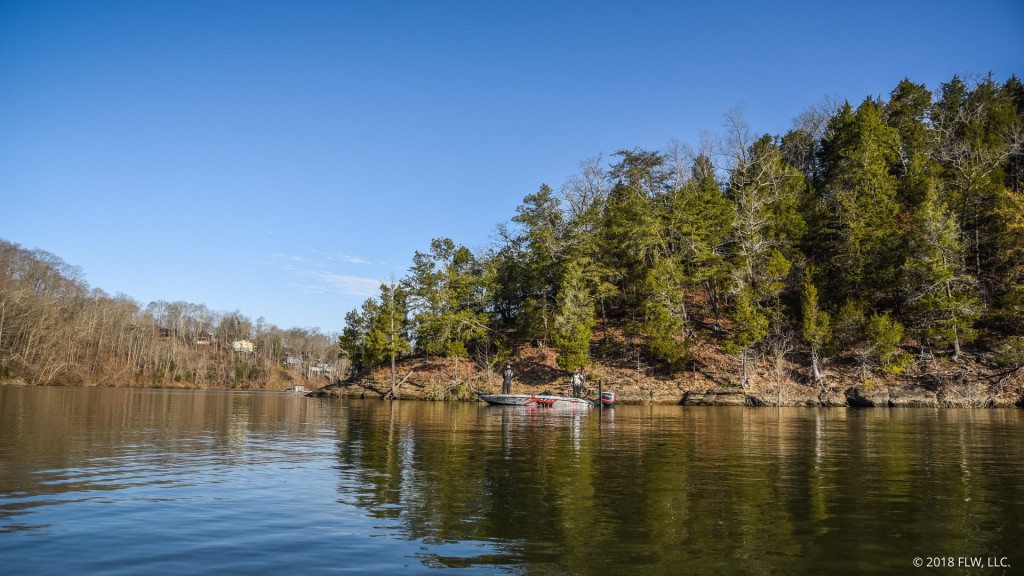 We might be on the cusp of a full-on spawn-fest on Lake Cumberland – for both largemouths and smallmouths – but the conditions are still in flux enough that nothing is certain.

Today, anglers in the top 10 reported catching smallmouths that were spawning, smallmouths that were staging up to make their final move to the beds and largemouths with bloody tails that were set up just outside of bedding areas. No one’s sure exactly how the final transitions will go down over the next few days, but the spawn is certainly going to be a factor. So is the decision regarding which species to target.

The most common factors in each of the top five pros’ report today is that everyone fished the middle and lower sections of the lake, and the fishing was best early in the morning.

Here’s the rundown of how they got it done on day one of the FLW Tour event presented by General Tire on Lake Cumberland. 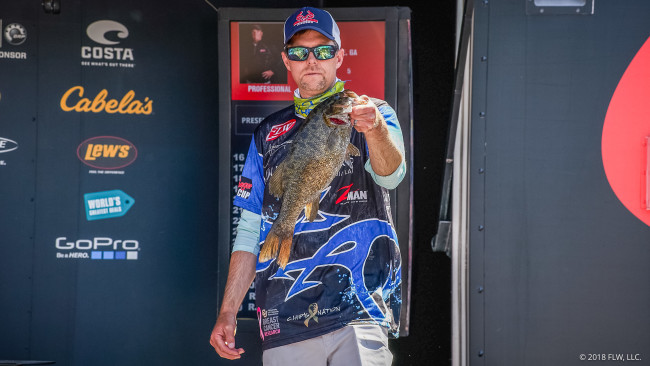 Jason Meninger cashed in on the morning flurry. He caught all of his weight before 11 a.m. and weighed in three smallmouths and two largemouths.

“The largemouths were a surprise,” he says. “I’m fishing a smallmouth area. I’m basically fishing moving baits and running and gunning.”

He anticipates the fish will set up to spawn this week. The key will be figuring out how to catch them more consistently.

“It’s a pattern, but today it was an area and a pattern,” Meninger says. “I tried to expand it, but once it died, it died. “ 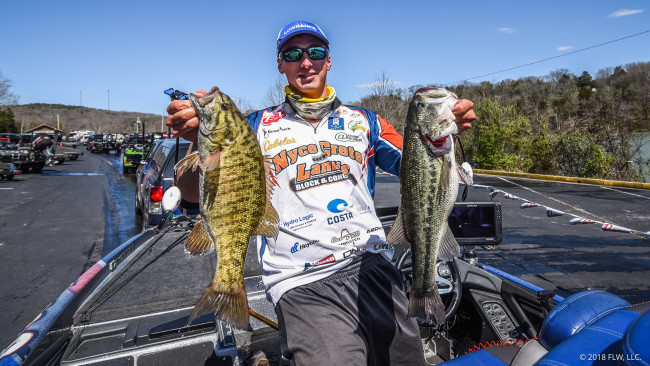 Grae Buck is part of the smallmouth club. He weighed four brown bass, but lucked into a bonus kicker largemouth, too.

“I ran down to Beaver and Otter [large creeks on the lower end],” says Buck, who fished moving baits. “I was fishing windblown areas. I caught all of them by 12.”

Buck might have left a little out there today. He says the fish were shallow in the morning, but they slid out once the sun got high. He was able to mark quite a few of those suspended smallies but hasn’t figured out a good way to catch them.

The Pennsylvania pro is keying mostly on prespawn areas for now.

“They moved up more than they were [in practice],” he says. “They’re on their way. I’m running a pattern – windy, rocky shores – but there’s a specific kind of rock.”

If you think Jared McMillan’s Cinderella run at the Pennzoil Marine Angler of the Year is a fluke deal, think again. He showed once again today that he’s got the hottest hand on the FLW Tour, and his skills reach far beyond the borders of the Sunshine State. The 22-year-old AOY leader weighed in 16 pounds, 12 ounces to start the tournament off in fourth place.

“J-Mac” weighed in three smallmouths and two largemouths. Interestingly, his fish were mixed together, and his seven keepers were basically evenly split between the two flavors, but he’s fishing only one pattern. He believes the smallmouths he caught were on beds, but the largemouths were prespawn.

Three big bites first thing this morning got J-Mac started on the right track, but he also experienced a sudden lack of action sometime in the middle of the day.

“I had one little area today,” J-Mac says. “Tomorrow I’m going to have to run around a little more. The wind just made it hard to run around today.

“I might zero tomorrow. Who knows, with the way the rest of the day went? I thought I was gonna kill them.” 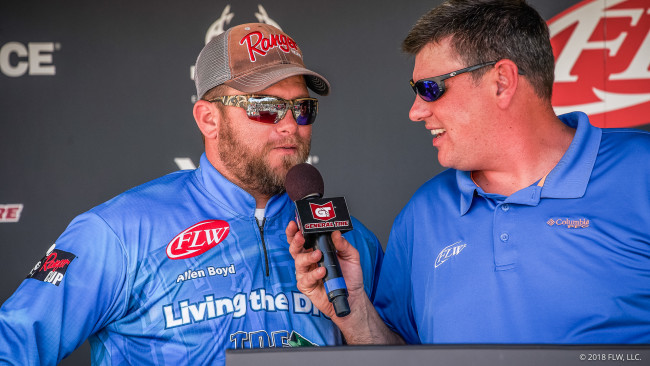 Largemouths were the key to Allen Boyd’s day-one limit. He says he’s around some really giant bass. They just didn’t cooperate as well as he’d hoped today.

“I messed around with smallmouths a little bit early,” Boyd says. “I didn’t know the wind was going to blow as much as it did, or I might have messed around with it a little more. I’m on a pattern. The only problem is there are 100 other guys running the same pattern.”

Boyd is sticking with shallow areas and fishing moving baits. His bites have come one here, one there, and he thinks some of the inconsistency stems from the water level dropping and forcing his fish to move.

“I don’t think they’re up there committed to doing their thing yet, but they want to be,” he says. “I caught some giants in practice. They were about to pop.”