Lambert is at it again 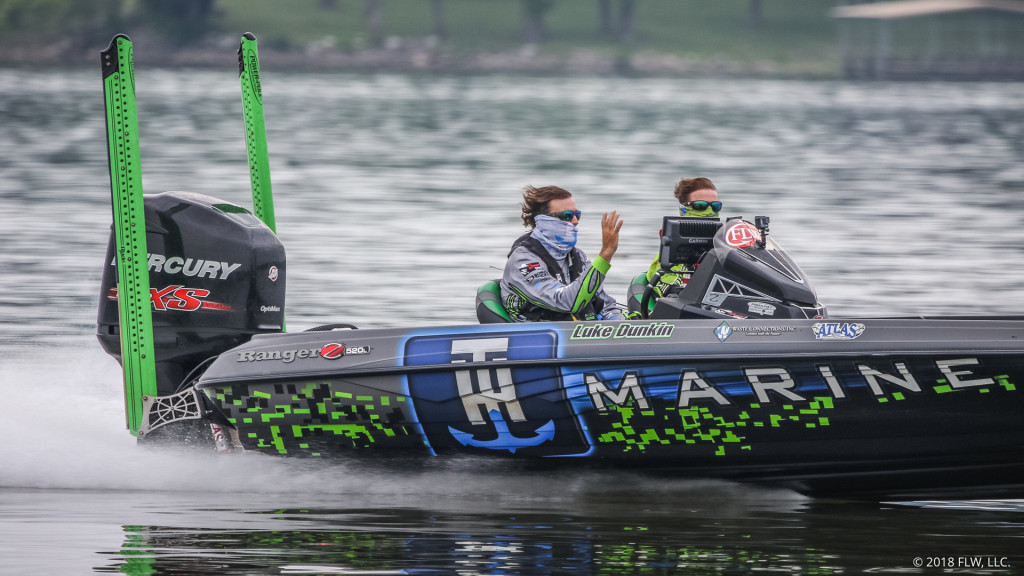 With a bunch of our coverage concentrated down by Paris, most of the crew is off the water and headed toward weigh-in now. We’ve missed quite a few anglers that are ultra-hammers on the ledges, so there’s a lot of mystery to unwrap at weigh-in. Speaking of weigh-in, it starts at 3 p.m. CT down at the dam or right here.

Rex Huff has just two small ones. Charlie Evans is doing well – he’s got a limit that may go about 14 pounds.

Cory Johnston has three in the boat for about 10 pounds now. So far he’s failed to capitalize on his early 5-pounder.

Aaron Britt is working on a decent bag – he’s got a big smallmouth and a big largemouth and two regular keepers to go with.

There’s a storm popping up down around Paris, and the rest of the afternoon could be damp in places. There’s no single band of rain imminent, but there are plenty of pop-up storms around now and word is that some of them could be fairly severe. It’s been fairly still and not too warm most of the morning, so perhaps some weather will liven things up on the lake.

One thing that hasn’t changed yet is the current – the TVA is still pulling right around 28,000 CFS.

Kerry Milner has three that are about 4 pounds each. He’s hopping ledges with a Carolina rig.

Chad Morgenthaler has been fishing offshore all day and has four in the boat for about 13 pounds. One of them is a 6-pounder, and he’s one decent fish away from a pretty solid limit.

Steven Hatala is fishing offshore and has three for about 7 pounds. Billy McCaghren has just two, and he says they’re extremely dinky.

Mark Rose has just two so far and says the fishing is terrible. If he doesn’t put something together this afternoon we could be in for some major changes in the AOY Race.

Meanwhile, Tim Cales has about 11 pounds for five. Casey Scanlon has some number of fish for about 6 pounds. Also, down by Paris our folks can hear some thunder in the distance.

Jim Dillard says he’s got a limit for about 14 pounds. That’s a solid start for sure.

Carl Jocumsen just caught about a 3-pounder to get up to a limit. That’s drawn entirely from his stream on YouTube, so we don’t have a total, but a limit is nothing to sneeze at today.

Brandon Mosely and Tim Frederick each have one. It’s very much feast or famine on Kentucky Lake today.

Billy Hines has just a solo fish, but it’s about a 5-pounder.

JT Kenney and Cody Meyer each have two. They’re really lighting things up this morning.

11:08 Bohannan is striking out

Greg Bohannan is south of Paris now and flipping docks. He came down to escape the pressure, but he’s only caught shorts so far.

“I can’t believe I’m fishing docks on Kentucky Lake,” says Clayton Batts. He’s got two, and based on some of our early performances may want to consider a move off the bank. 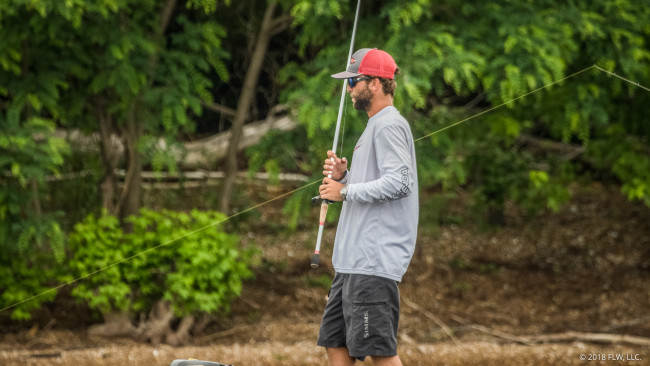 Alex Davis has just one keeper so far. He says he’s waiting on current, but so far the TVA has only been pulling about 28,000 all morning, which really isn’t enough to make the ledge fishing markedly better.

Also, Cameron Gautney has no fish. 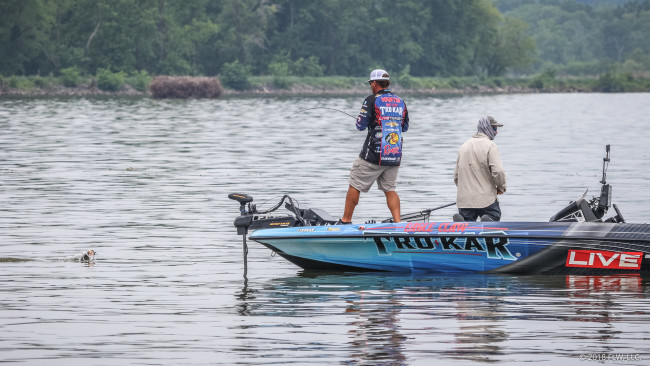 Jason Lambert has run three more spots with nothing to show for it now, just graphing over and then moving on.

Scott Martin just filled out his limit with a 2-pounder. John Cox has four now – he’s fishing shallow and one is a 4-pounder. Jim Moynagh has no fish so far. Also, Brett Preuett caught a 2-pounder for his second about 15 minutes ago.

Scott Martin has four for about 12 pounds. We’re missing a few ledge superstars for sure, but right now it’s Lambert and everyone else.

Clent Davis caught a good one out deep on his third cast and hasn’t caught one since. Now he’s throwing a wacky rig on docks. Bryan Thrift has a small limit in the boat, but he says bigger fish have been hard to come by.

Jason Lambert just lost like a 3-pounder. He says it “wouldn’t‘ve been no help anyway,” but half the field might kill for a 3-pounder right now. 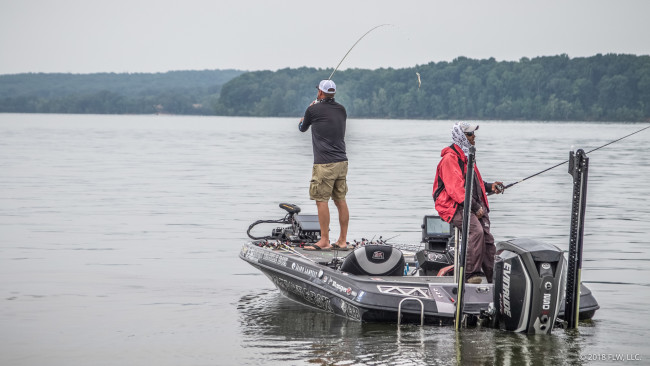 Owned by exactly 50 percent of Fantasy Fishing players, most pundits argued that he should be 100 percent owned. So far today he’s got 24+ and his smallest is a 4.29. He’s caught 10 keepers, and as you might guess, he’s having fun today. 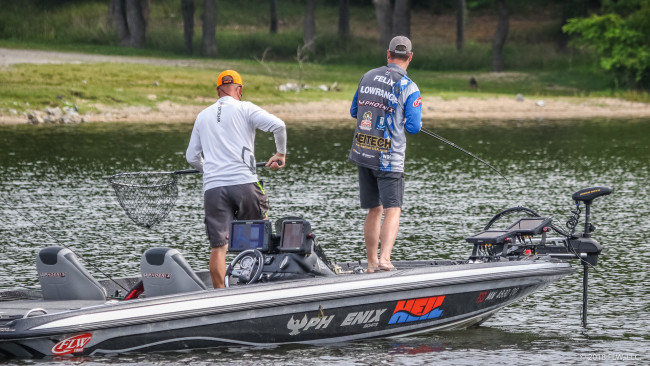 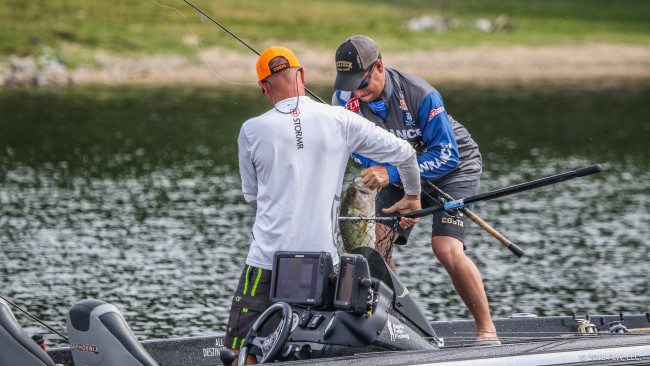 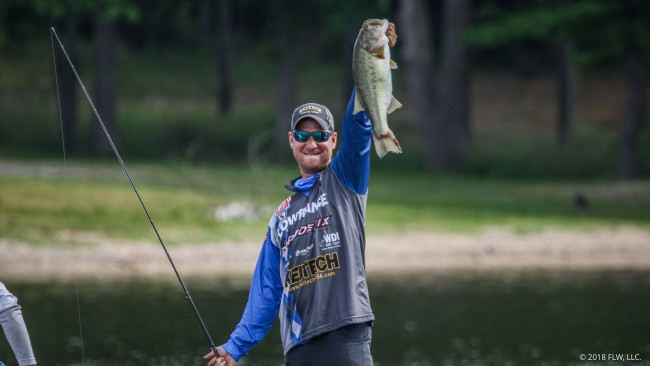 Austin Felix just caught a 5-pounder for his fifth – he’s fishing offshore and has over 15 pounds in the ‘well now.

Jason Lambert just drove by one of our reporters. Expect an update on the Ledge Hammer shortly.

Austin Felix has four keepers for about 12 pounds. Rob Jordan has three for about 7 pounds and just spent about 20 minutes trying to catch one off a bed. 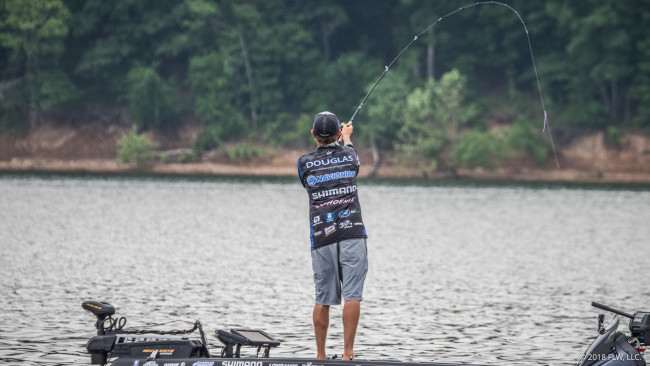 Josh Douglas is off to by far the best start we’ve found. He’s fishing offshore and has over 15 pounds for just four fish. 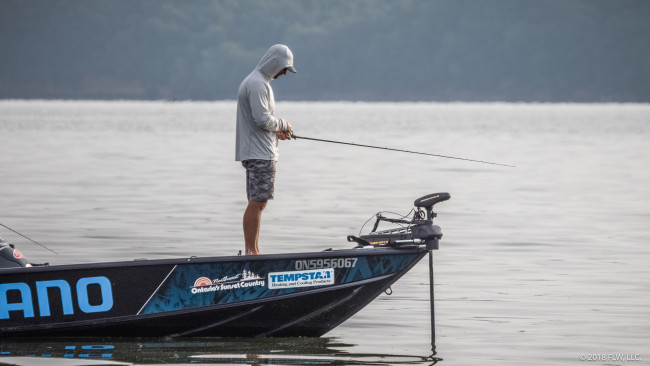 Jeff “Gussy” Gustafson has his second now – it’s about a 3-pounder. With that, he’s got about five pounds or so in the ‘well. 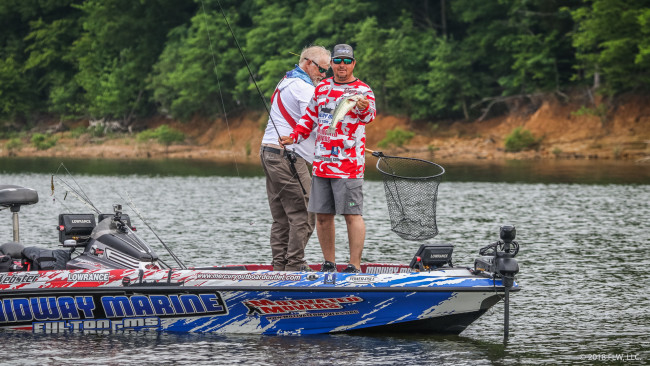 Brian Latimer just put his fourth keeper in the boat. Jim Jones has one 3-pounder. Cory Johnston has one 5-pounder now. Cody Meyer just caught his first keeper. Joseph Webster has three for about 9 pounds – one of them is a 4-pounder. Chad Grigsby is flipping and just boated his first.

Cody Kelley has four in the boat already. Nothing too big, but he says he’s got about 7 pounds in the livewell. 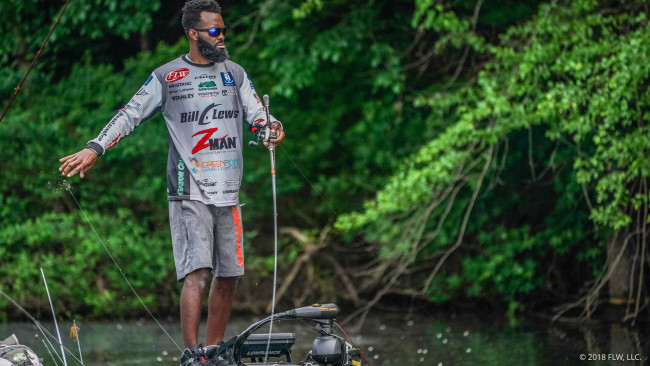 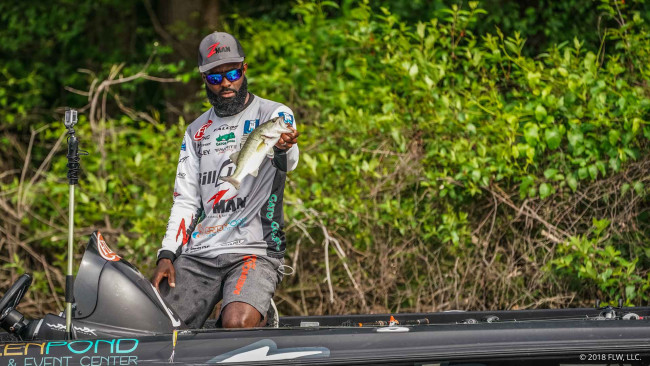 Cory Johnston has nothing so far. Brian Latimer has three in the boat and is fishing shallow. Bryan Schmitt has two decent fish to start out.

Fishing shallow, Jared McMillan hasn’t boxed a keeper yet either. It is definitely tough on Kentucky Lake right now, as it’s almost 9 o’clock and we haven’t run into anyone with a limit yet.

Jason Johnson has a small one to his credit so far. Brandon McMillan is fishing marina docks and has nothing.

Fishing offshore in the mouth of Big Sandy, Dylan Hays has one that’s just shy of 4 pounds in the boat and nothing to go with. 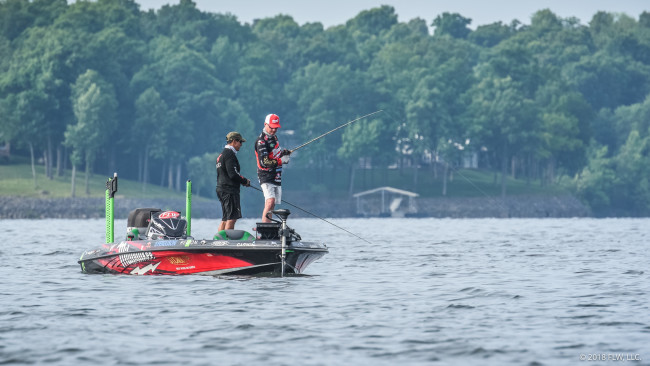 Scott Ashmore is on the board with a pair of 3-pounders. That’s a pretty solid start by this year’s Kentucky Lake standard. 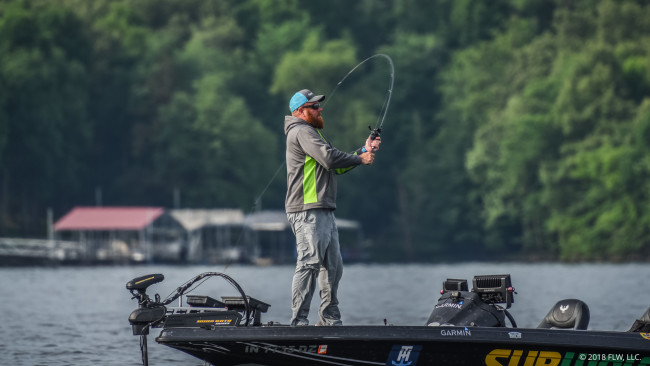 Pennzoil Marine Angler of the Year leader Mark rose is throwing a c-rig offshore and has one little one so far. John Voyles has one too, and it’s a 5-pounder – he’s fishing offshore as well. Matt Reed has three keepers –  one is a 3-pounder and the others are small.

Brett Preuett started the day in style with a 5-pounder. He’s fishing deeper, but not way out on the river channel. So far, it seems like a fairly even shallow/deep split. 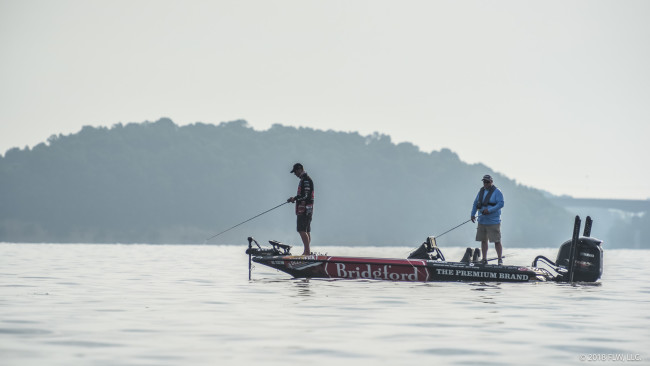 Matt Stefan has one keeper in the boat so far. He’s dragging out on a ledge. Jeff “Gussy” Gustafson is offshore as well and has a 2+ in the livewell to start. 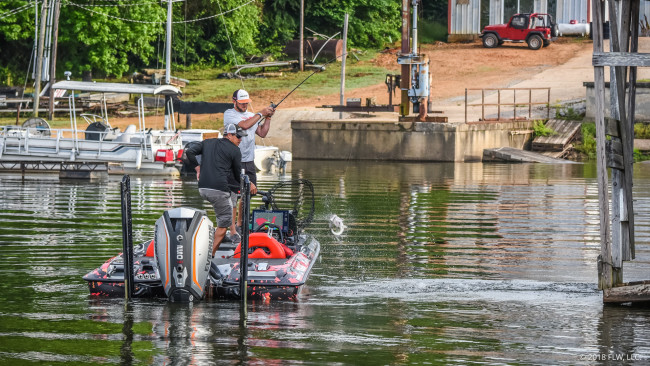 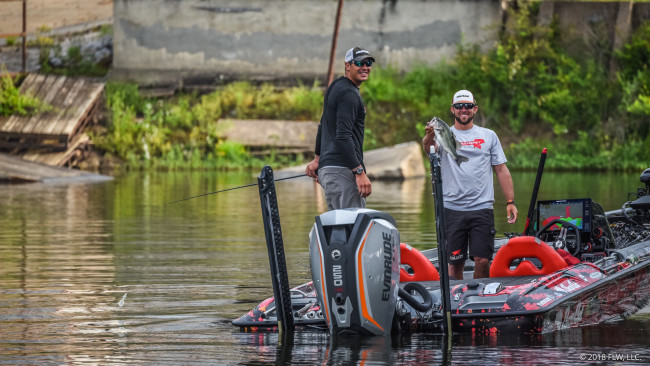 Zack Birge is our first angler on the board – he’s got a 2+ and a 3-pounder shallow already. David Dudley lost his first fish – he says it was a 3-pounder. Carl Jocumsen ran about to New Johnsonville and he’s started out fishing shallow as well.

We’ve got some folks fishing now, with no fish to report yet. Only about five pros chose to go over into Barkley, so we’re probably going to leave them alone for the day. With the fishing kinda tough in Kentucky, it seemed like the odds for Barkley might have been better than in years past.

As of last night, we kinda thought it would be wet all day, but it seems like the rain is going to hold off. Right now it is simply beautiful, and per the forecast, the rain isn’t going to roll in until the afternoon. When it does get here, it could be a little dicey, as it’s summertime and hot and that usually means some thunder and lightning. 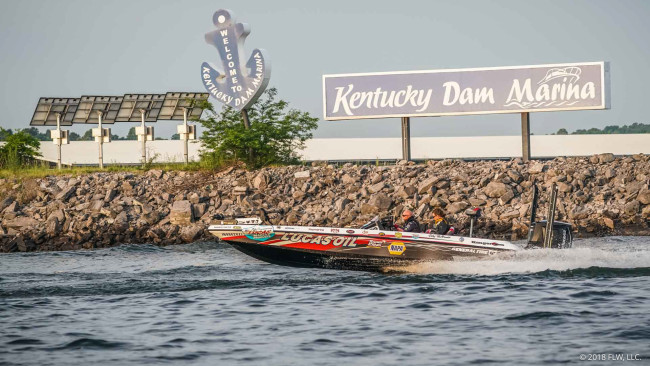 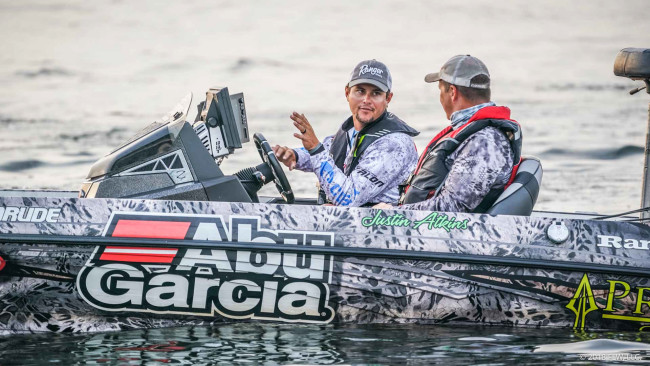 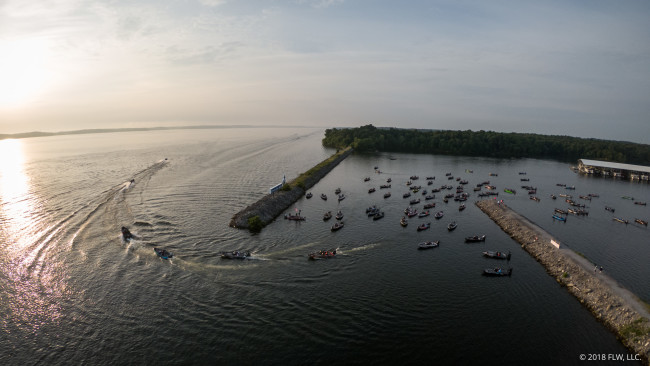 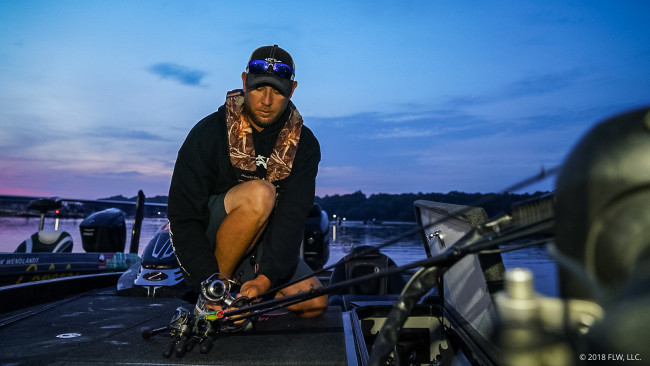 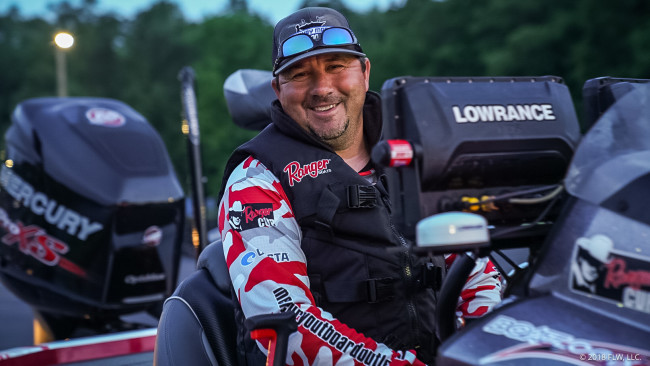 With just one stop left after the FLW Tour presented by Costa on Kentucky Lake, the season is winding down. It’s going to end with fireworks on St. Clair, but first the pros need to run the gauntlet of a tricky Kentucky Lake.

Unlike in years past, this Kentucky Lake stop isn’t likely to be the full-on ledge derby it usually is. That doesn’t mean there won’t be fish caught offshore, but as of the end of practice, there were simply too many bass hung up shallow or in transition to really make the ledges fire. Plenty of pros are still committed to the offshore game – it’d take a team of oxen to pull Jason Lambert and Randy Haynes off the ledges, but that’s definitely not going to be the only game in town.

With little history for big tournaments on Kentucky this time of year, the fishing is a bit of a mystery. There’s a shad spawn going on, and there are still bass shallow guarding fry and chasing spawning bream. Additionally, the bushes in Barkley Lake have a decent amount of water in them – plenty to flip a little or fish in front of. Basically, seeing how folks actually catch fish is going to be more interesting than usual.

Practice has been brutally tough for most pros, with not many bass and a lot of Asian carp to go around. Nonetheless, it sounds like weights are going to be decent, even if it takes a lot of the day for pros to catch five good ones. Unlike in years past, it’s very difficult to just run to a community hole offshore and start whacking keepers.