FLW Tour finale should include a parade of big smallmouths 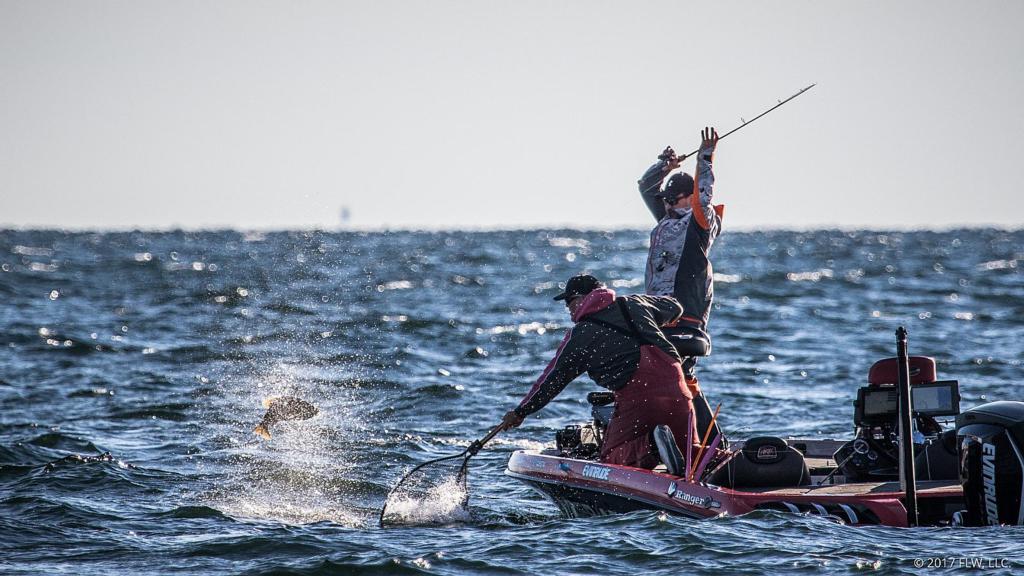 The 2018 FLW Tour season wraps up this month with a final event on Lake St. Clair. Fishable waters include Lake St. Clair, St. Clair River, Detroit River and western Lake Erie. Fishing Canadian waters is also allowed. Initial reports indicate the system is healthy and catch rates are incredibly high, so what will be the key to winning the finale?

Let’s break it down. 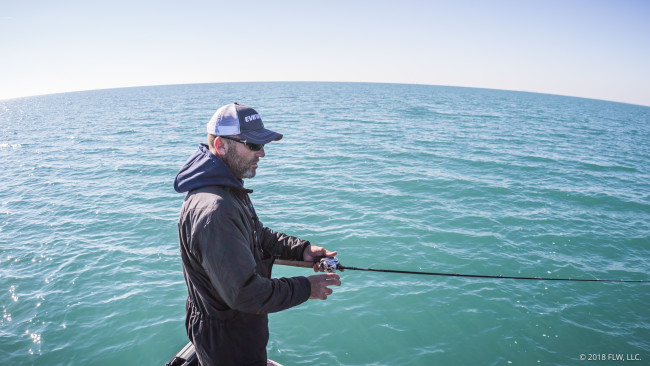 Visiting anglers often refer to St. Clair as “Lake Random,” as luck with the magnum smallmouths inhabiting its waters seems to come at any time without regularity. Smaller bass, by comparison, often are easier to pattern. Therein lies the challenge for visiting Tour pros.

After spending a decade fishing St. Clair nearly daily, I can attest to the frustration of trying to figure out the tournament-winning bronzebacks that swim there. However, review of local tournament standings proves a few individuals do so time and again.

No one is better on St. Clair than local resident Scott Dobson. Period. Since the time when the big water became popular among competitive circuits, Dobson has been stashing away tens of thousands of dollars of other people’s money. This year, as a competitor on the FLW Tour, holding solid in the standings, he hopes to again bank serious bucks while qualifying for the Forrest Wood Cup at the same time.

Dobson weighed in on what he thinks the keys will be at St. Clair. But before delving into his predictions, let’s dissect the system and address the best potential areas and patterns. 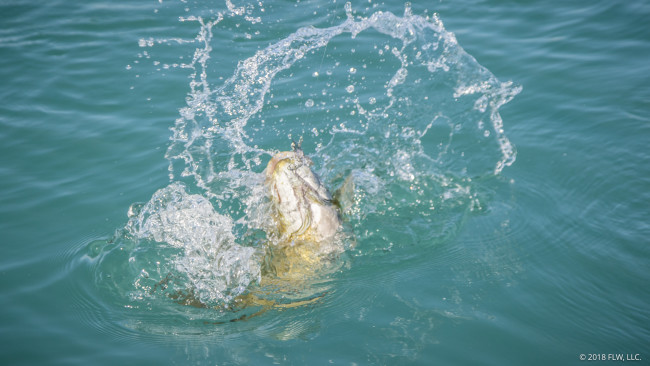 Smallmouths will be the overwhelmingly dominant target species. While the system harbors decent numbers of largemouths, rarely do they eclipse 4 pounds, making 20-pound bags (the standard of good Great Lakes fishing) nearly impossible to compose entirely of green fish. Sure, a single specimen might bump up a high finisher’s bag, but largemouth bass will not carry the mail in this one.

The spawn across the system

Timing of the event, combined with a late spring and high water levels, will likely have the bass population in several different cycles of the spawn. Traditionally, the biggest, heaviest fish appear in the Great Lakes in early prespawn: March through May. But, on occasion, St. Clair produces a final wave of spawners that brings some mega-females to the scale (biologists wonder if this final push is actually a second spawning cycle for some fish).

In any case, these fish usually make up a smaller population of spawners and bed fairly deep – 10 feet and deeper. Key areas to find them will be the famous “Mile Roads” off St. Clair Shores, or, possibly, the southern Canadian shoreline of St. Clair near Stoney Point.

Heading downriver to the lower Detroit River and Lake Erie, the bass will be done spawning, for the most part. While we’re certain to hear tales of spawners up shallow near the Lake Erie islands, the major population of bass finishes up by June. The Detroit River system will likely not be much of a player, as it performs best in the fall when migratory baitfish pile in. Open waters of Erie could be productive, especially the “North Shore” areas around Colchester, Ontario, where several transitional rock piles and reefs typically hold fish in the 15- to 25-foot range this time of year before they move far offshore to summer haunts.

A wild card there might be the moon phase. Long ago, Erie legend Steve Clapper keyed me in to difficult fishing around the summer full moon (which lands on this tournament). It’s something I found to be true over my 20-year Great Lakes career. At times, however, suspended fish became eaters with unique presentation tricks. Drop-shotting is the only game in town on Erie this time of year, but occasionally using massive leaders is the trick if fish are marking up high. 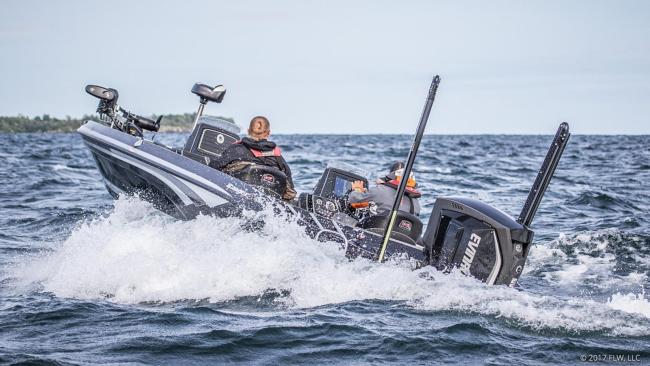 One additional consideration for competitors must be the massive run necessary to reach popular areas in Erie. Several years ago, the St. Clair system suffered a major decline in fishing, forcing national tournament competitors to run to Erie in order to compete. Today, that type of run is talked about like commonplace. However – take it from me – a run from Lake St. Clair Metropark to the open waters of Lake Erie can be the most harrowing, difficult endurance trip many will ever face in a bass boat. Most times, it makes a Champlain trip down to Ticonderoga feel like a walk in the park, by comparison. Erie waters are rarely calm, and the Detroit River and St. Clair feature some of the worst, churning boat traffic in the country. A smart competitor might run during the week, but save a close-by hole for the weekend. 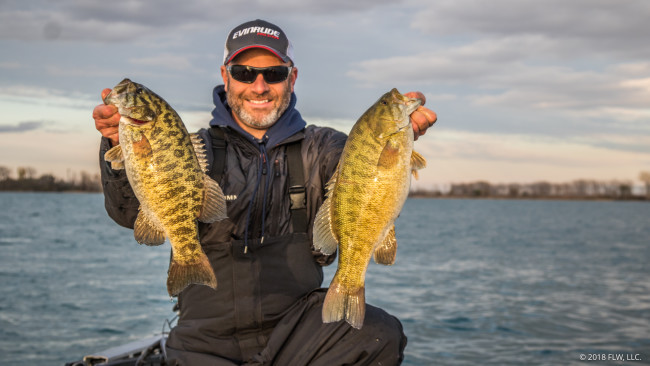 Dobson likes his chances on St. Clair, as things are progressing along nicely this season.

“The lake is a little behind this year,” he says, “and the vegetation is a little light, but there’s lots of bait and tons of perch around. Clarity is good, and there’s quite a bit of current due to the high water.”

Current has always been the key to Dobson’s system, whether ripping through the St. Clair River, or subtly caressing main-lake grass beds.

“Postspawn fish like current; they move toward it,” he says.

I can attest to Dobson’s attention to flow, as I’ve seen him repeatedly catch giants by making the exact same cast numerous times all over the lake. The key is a deep understanding of how his bait comes to the fish. 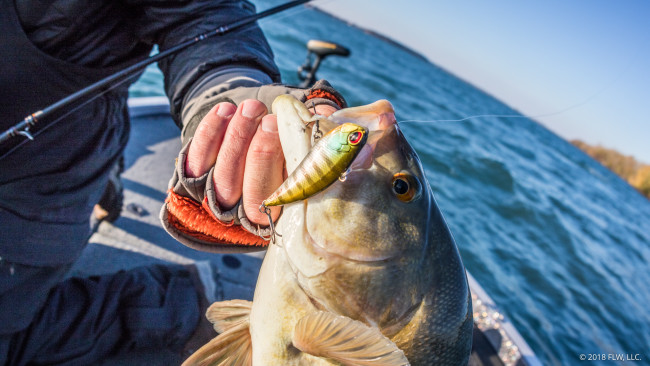 Productive lures for St. Clair will be the usual: tubes, jerkbaits, drop-shot worms and the like. While a gaudy spinnerbait or lipless crankbait will catch a few, it won’t produce repeated giants like the subtler presentations. Deep cranking and spy-baiting are better later in the summer, but never overlook a swimbait on St. Clair. The lake allows for power fishing as much as finesse, so anglers that are more comfortable with baitcasters have a good shot to take down the light-line warriors.

A sleeper pattern will be targeting small groups of postspawn females just outside the spawning grounds as the fish recover near small weed edges. These targets, found from 7 to 12 feet deep, depending on the area of the lake, are composed of isolated patches of green cabbage grass that grows best this time of year. Following the spawn, big female smallmouths seem to gravitate to this vertical-type cover to recuperate. While it’s never a pattern to catch numbers of fish, targeting these grass clumps with a jerkbait, tube or jig often results in one or two monsters on each stop. The key will be for a competitor to piece together several spots.

Finally, one major influence every St. Clair veteran considers in late June is the area mayfly hatch. Recent years have seen mega-hatches. When it happens, nearly every fish in the system keys in on the meal, from perch to bass, walleyes to muskies. The open-water mayfly hatch on St. Clair produces large schools of bass in areas where main-lake currents create eddies that cause large rafts of bugs to group up on the surface. There, a key lure can often be a walking topwater or lightly rigged tube, fished up off the bottom. 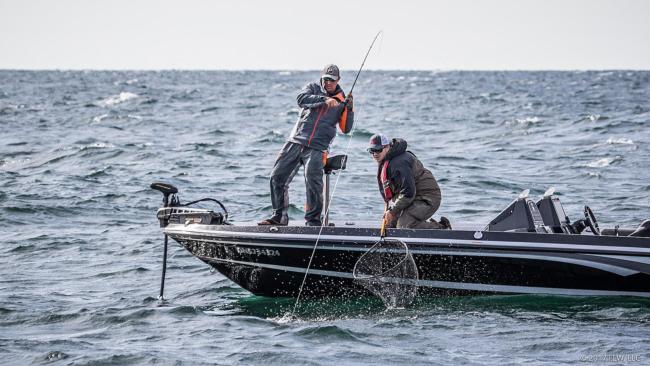 While Dobson will be the overwhelming favorite in this event, the Johnston brothers, Chris and Cory, should have a shot. They’re experienced big-water smallmouth anglers. Also, Larry Nixon has won at St. Clair numerous times before.

Tournament fans might think the event will be a battle of electronics wizards, but that’s rarely the case for competitors who stay on St. Clair. The subtleties of the lake often prevent key areas from being found by any method other than casting and winding. For that reason, previous knowledge, the ability to cover massive amounts of water and an immediate understanding of what to look for will be key. Other anglers to consider will be Northerner Jeff Gustafson, open-water specialist Cody Meyer and Scott Martin, who loves any lake with grass. Mark Rose should secure the Pennzoil Angler of the Year title. He’s comfortable fishing his strengths on St. Clair, and has experience and a circle of friends there. 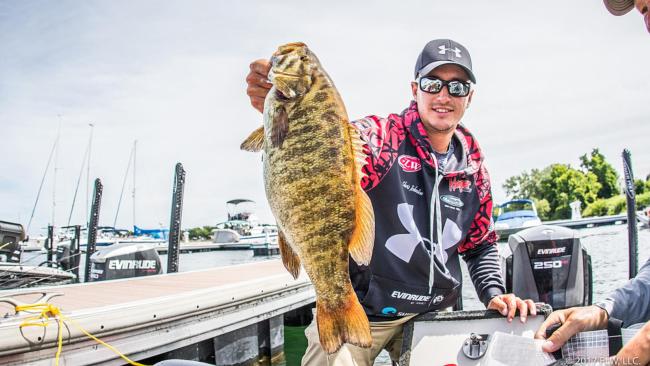 In all, St. Clair will be a slugfest. Catch weights will be slightly lighter than pure summertime derbies, as postspawn fish will come in a bit underweight. Expect 18-and-change a day to be needed to make much of a ripple, and the winner to eclipse 76 pounds for the event.

Regardless of the final weights, you can expect St. Clair to be a total slugfest; a supreme showcase of Northern smallmouth fishing. It’s a fine destination to wrap up another season of the FLW Tour.