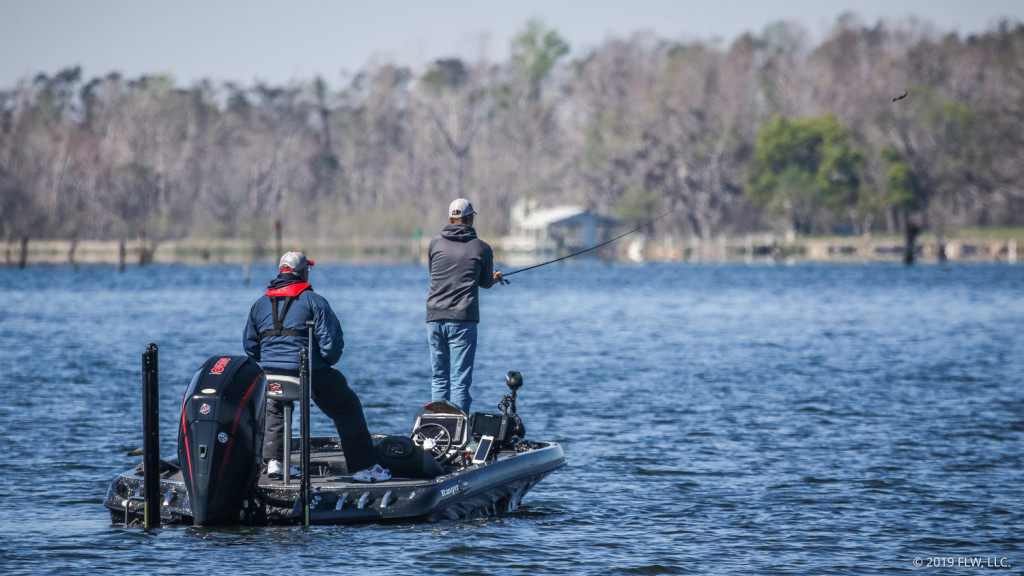 Holice Stacey has a little more spending money in his pocket after taking home the top prize in the FLW Tour Marshal program contest at Lake Seminole last week — money he plans to pump right back into his passion for fishing.

The 54-year-old Alabama native, who does pipeline work when he’s not fishing, also competes as a co-angler in the T-H Marine FLW Bass Fishing League (BFL) Bama Division. In addition to paying his entry fees for the rest of the season, his $2,500 first-place winnings have already contributed to a couple good causes.

“I’m doing some work on my boat already – new carpet, new batteries, stuff like that,” he says. “I’ve already bought some new rods and reels and tackle to go with it.”

Stacey was paired with rookie Bradford Beavers on day one of the event, and he was treated to a bass-catching clinic to the tune of 25 pounds, 2 ounces. Paired with second-year pro Matt Becker’s 17-2 on day two, Stacey’s 42-4 two-day total was nearly 5 pounds heavier than second-place marshal Jody Ward ($1,000).

Beavers and Becker caught a lot of big fish to help out Stacey in the contest, but they also provided a lot of intangible value in the form of advice and generosity.

“Both the pros – Beavers and Becker – they were super nice guys,” he says. “They were willing to explain their electronics and different baits they try to use in different situations. All that was tremendously great. I learned a great deal. I was really impressed with it.

“I went in not anticipating I was going to win, but I was really pleased, especially with both boaters I went with. I left that Friday [after day two] because I had to fish the BFL the next day, and both boaters texted me and asked how I did in the marshal contest. They were super nice and wanted to know how I did.”

Stacey’s been fishing since he could “hold a pole,” but even he admits there’s a lot to learn from FLW pros, and the experience of participating in the marshal program was hard to quantify.

“I had a blast,” he adds. “All the pros and everybody with FLW were just super nice. I thought it was great. It was an extremely worthwhile event, and I would definitely do it again.”

If the Tour stops close enough in the future for Stacey to take off work and make the drive, he won’t hesitate to do it all again. After all, he could always use a little more fishing money.

Thank you to all who participated in the FLW Tour Marshal program at Seminole. If you’d like to learn more about becoming a marshal, please call 270.252.1000, or visit flwfishing.com/marshals. Openings are available for the upcoming event at Grand Lake.