Weisenburger is running the show at Grand 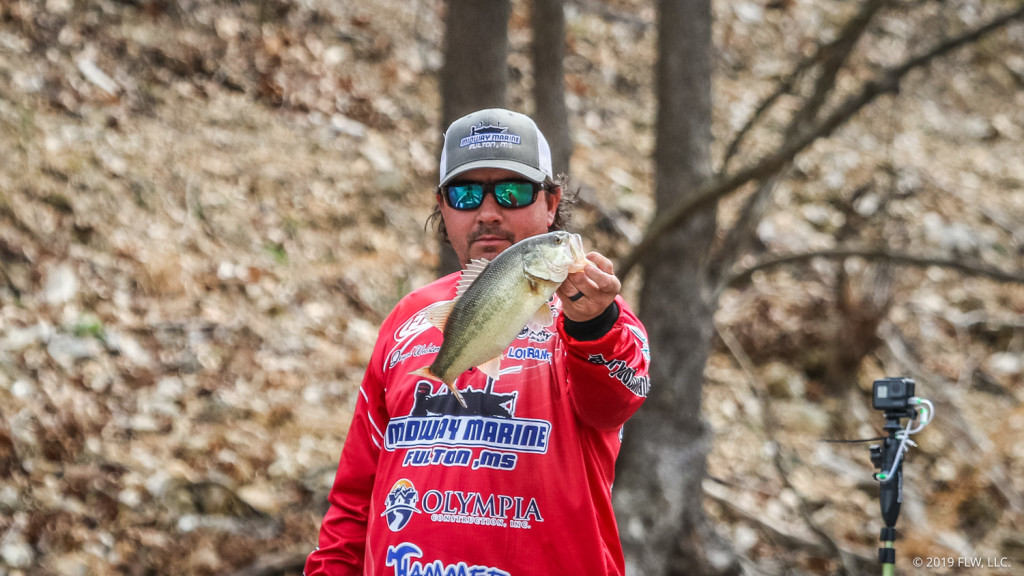 Weights on the leaderboard are estimates provided by FLW Marshals and media staff. They are not official.

Nothing too noteworthy has happened since the last blog post other than anglers catching small keepers here and there. Grand Lake has undoubtedly been a tough puzzle for the majority of the field. The changing weather is definitely the main culprit for the trickiness of the fishery. Still, we know the big ones live here. Kyle Weisenburger has proved that with his unofficial 22-pound bag. For those who have struggled, today is all about survival. A five-fish limit or even 10 pounds total is a feat to be proud of on a day like today.

We will keep the FLW Live Leaderboard updated until 1:30 p.m. CT. A little later, be sure to watch weigh-in on flwfishing.com. The first flight will cross the stage at Wolf Creek Park at 3 p.m.

Thanks for tuning in, and we will be back here tomorrow at 7 a.m.!

Josh Douglas and Bailey Boutires recently filled out their limits. They both have slightly over 10 pounds in the box. Tom Redington is starting to find his stride too as he has three fish for about 11 pounds. It sounds like he is targeting specific pieces of structure more than strictly burning the bank. Sheldon Collings got No. 3 in the boat – a 3-pounder.

Right now, it is only taking 12 pounds to crack the top 10 in the unofficial leaderboard. Every fish, even small keepers, are looking to be more and more important. 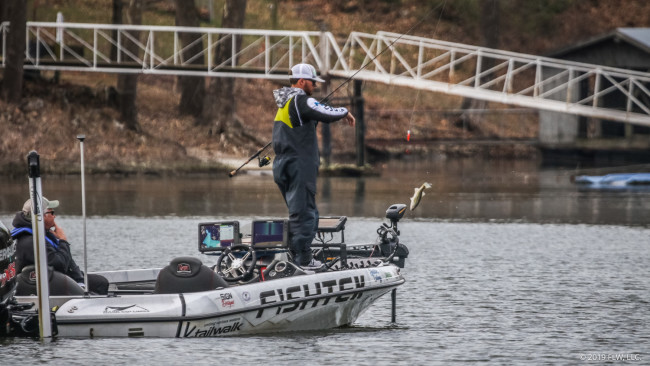 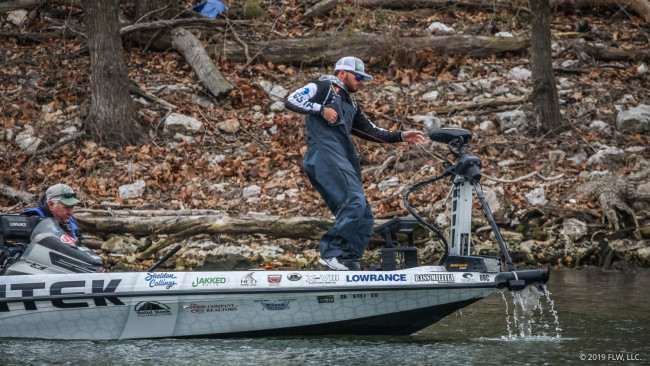 Sheldon Collings and Chad Warren each finally put their second fish in the boat. A few more keepers and they can both salvage their slow mornings.

In general it seems like the fish-catch updates are coming in a little slower in the last half-hour. We could either be hitting the classic midday lull, or the easiest fish have already been picked off. Regardless, guys are going to have to scratch and claw through the second half of the day to put fish in the boat and try to catch up to Kyle Weisenburger. 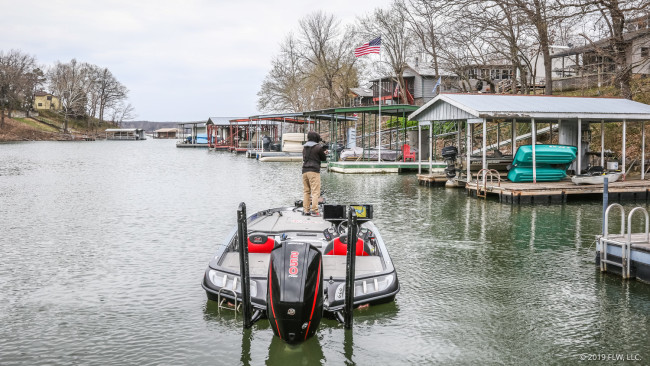 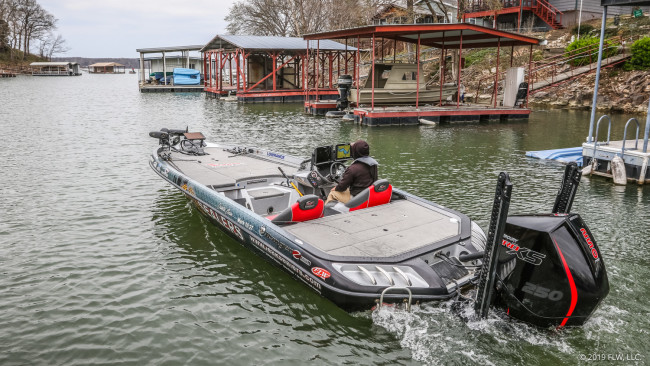 Nick LeBrun just completed his limit. He is throwing a whole bunch of baits to get his bites.

Chad Warren is still on the hunt for four more keepers. When we saw him he was running between a few creeks. He says the water has been clearing up in some of his spots, which he isn’t fond of. We just got a report that Dakota Ebare has 13 to 14 pounds. He caught his fish pretty quick this morning and is now just searching for fresh areas.

So far it seems like most guys are having to really grind to find their keepers. A lot of the fish are being picked off here and there from those who are covering a ton of shallow cover. Kyle Weisenburger is really the only angler who has found a magical area that has consistently kicked them out. The wind is also starting to pick up on Grand Lake and should be bucking out of the south for the rest of the day.

It looks like Kyle Weisenburger isn't leaving his primary creek so fast. He was able to bounce around to a different cut within the creek to nail a 4-pounder. He’s slow-rolling a moving bait near the bank. He is way out in the lead with his unofficial 22-pound limit.

Surprisingly, a lot of the Oklahoma anglers are finding themselves everywhere but the top of the leaderboard. Collings, Warren, Cortiana and Hallman are having a more difficult time today than we expected. Still, there is a ton of time left for the Okies to figure things out. 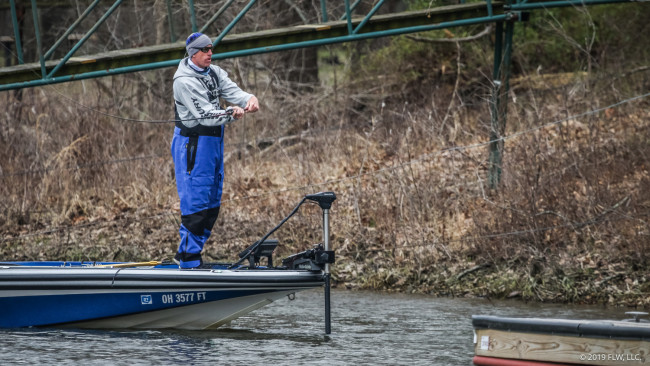 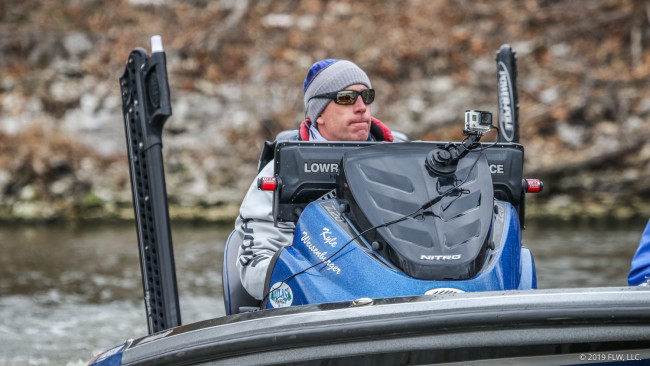 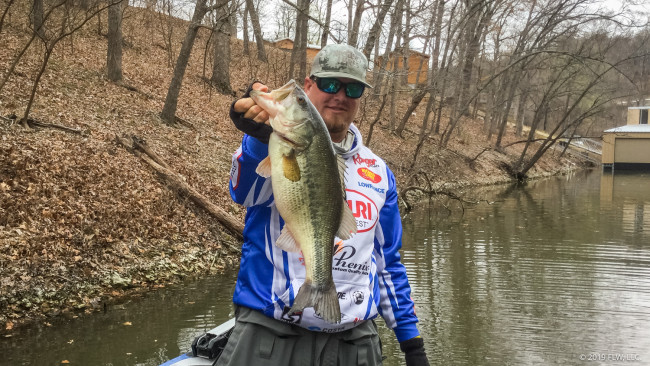 Our first reports from Kyle Weisenburger just came in, and apparently the Ohio pro has been crushing them all morning. We’re not sure which creek he is fishing, but he is certainly fishing around where the big ones live. His limit is up over 20 pounds and is anchored by a 5- and 6-pounder. Weisenburger’s marshal says that he is considering letting his primary area rest soon to go find fresh waters.

Braxton Setzer is working on a respectable stringer. Fish No. 4 found its way into Setzer’s boat to push his limit up to 11 pounds. 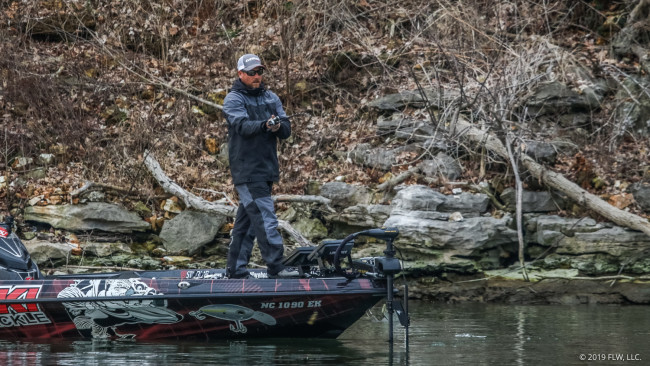 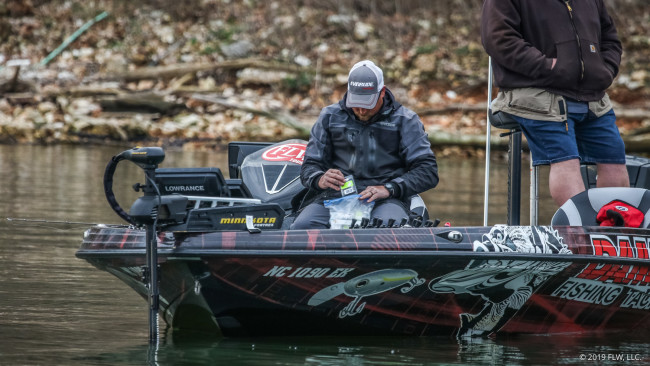 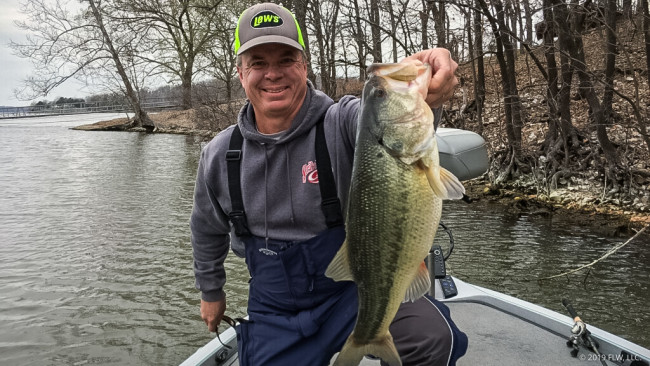 Today is the first day of FLW Tour competition since Bryan Thrift’s insane streak of 71 straight limits came to an end at Lake Seminole. He is starting out strong with three fish for almost 12 pounds. His last two fish were a 4- and 5-pounder. Safe to say the best in the world is looking pretty good right about now.

Glenn Chappelear is proving his first two bigguns were no fluke as he just bagged another 5-pounder. Now, he has a stout lead with three fish for 16 pounds total. Glenn is definitely eyeing up a 20-plus-pound day. 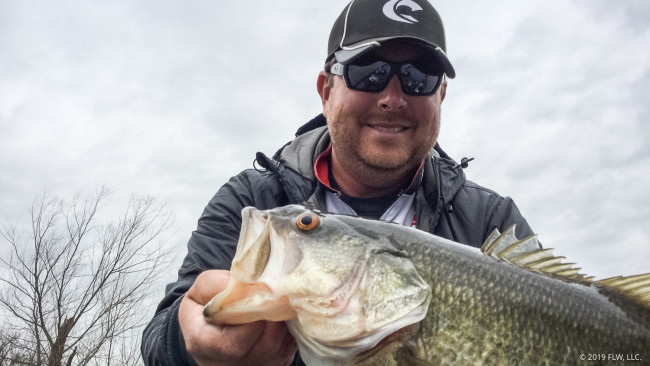 We’re starting to get a lot of reports of 2- to 3-pound fish being caught. Within the last 15 minutes we have heard of catches from Ramie Colson Jr., Bryan Schmitt, Casey Scanlon, Kyle Weisenburger and Jon Englund. On the bigger end of the fish-catch spectrum John Cox just bagged a 4-pounder.

Our current leader Dicky Newberry just capped off his limit with a 2-pounder. That fish has the Texas pro up to around 14 pounds and a 3-pound lead.

Glen Chappelear just caught a 6-pound Grand Lake hawg. The Georgia pro is still throwing a moving bait up the bank. He has double-digit poundage with just his two fish. If he catches three more keepers he should be way up the leaderboard after today.

Joseph Webster is keeping his momentum train rolling. The Alabama pro has three in the boat for 9 1/2 pounds. We aren't sure what baits or technique he is running but he is up tight to the bank.

Florida pro Blake Smith found himself his first fish of the day – a 5-pounder. His marshal reported that Smith was fishing some transitional cover up near the bank. Kyle Cortiana broke the ice on his first fish of the day. He was flipping some shallow cover near docks and snatched a solid 3-pounder. Glenn Chappelear is fishing somewhere up a creek. He has one 4-pounder to show for his efforts. Kyle Weisenberger stuck a 5-plus-pounder on a blade not so long ago.

We also got a report that Terry Bolton just bagged fish No. 3 on a plug. Leave it to the Rapala pro to get the crankbait game going. That is his third fish of the day and has his total up to 8 or so pounds.

Ryan Chandles has the first reported limit of the day. His stringer goes for about 10 pounds. It’s not the biggest bag, but a limit is a limit.

The water temperatures across Grand are undoubtedly lower than we found in practice. We have reports of water dipping down as low at 48 degrees in certain stretches of the lake. The crazy thing is that this may be the most stable day of weather we experience during the entire tournament. Tomorrow we will have potential thunderstorms roll into the area with a cold front following on Saturday and Sunday.

Right now, South Carolina pro Ron Farrow has himself in the lead with four fish that go for nearly 12 pounds. Fish Nos. 3 and 4 came from back-to-back casts on the same laydown. His marshal reported that Farrow is using a moving bait.

Zell Rowland is finding his groove this morning on Grand. He has about 10 pounds in the box with three fish. It looks like he has found his way back into a cove and is chucking a moving bait. Arizona pro Marty Lawrence is on the board with a beauty that weighs about 6 pounds. Along with a bunch of other pros, Lawrence is working shallow cover.

It will be interesting to see if beating the bank stays as the dominant pattern as the day and tournament progress. One can imagine that the best shallow-water cover is being hit hard this morning. These fish are prespawn, so we should see some offshore patterns kick in eventually. 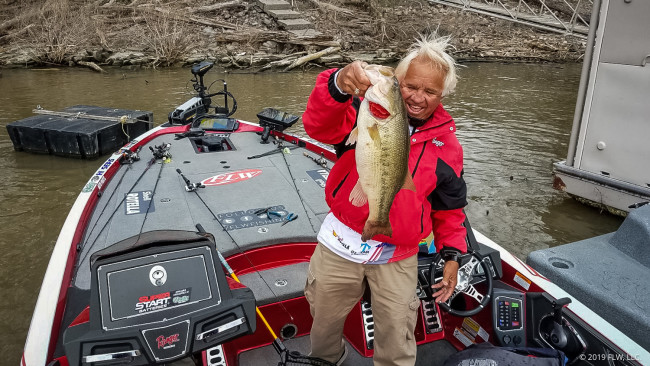 The shallow-bank bite is looking to be the juice so far this morning. Jimmy Houston just bagged a 6-pounder around some docks. This is certainly the start the Oklahoma pro was looking for. Alex Davis and Jonathan Canada have each caught quality fish up shallow too. So far it is looking like a classic Grand Lake bite as pounding shorelines with moving baits is the deal. 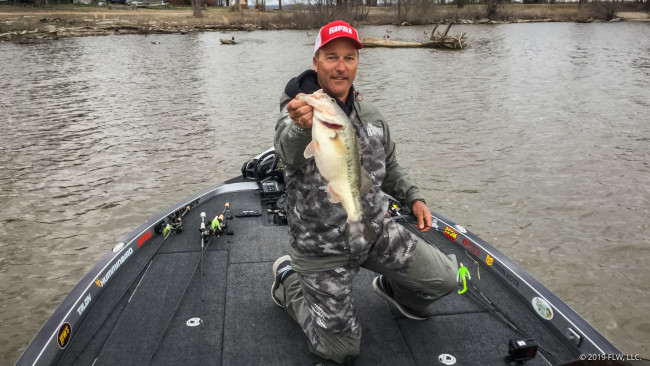 One of the heavy favorites coming into the event is hometown angler Sheldon Collings.  At takeoff he said he is shooting for quality bites that will get him about 20 pounds total. He just landed his first keeper of the day – a 2-pounder.

AOY leader Terry Bolton has a few fish in the boat. They add up to around 5 pounds. Scott Martin, who is second in the AOY race just bagged his first keeper, which goes for around 2 pounds.

Jimmy Houston is also on the board with a 2-pounder. If Jimmy can get his spinnerbaits working he should be an angler to keep an eye on this weekend.

A lot of pros were singing to blues in practice, but it looks like life is a little brighter on Grand Lake than some of them let on. We've seen a pretty steady stream of 3- to 5-pound fish come in so far this morning, suggesting we just might see some decent bags weighed in this afternoon.

Most of the catching has been done with an Oklahoma staple: the spinnerbait. Grand is just right for a blade. The water isn't gin clear, but it's not chocolate milk. It's ripe for a reaction bait approach. Plus, Grand Lake bass are notorious for wanting to eat a spinnerbait.

Dicky Newberry is the big man on Grand so far. His 5-pounder is the biggest fish reported yet. 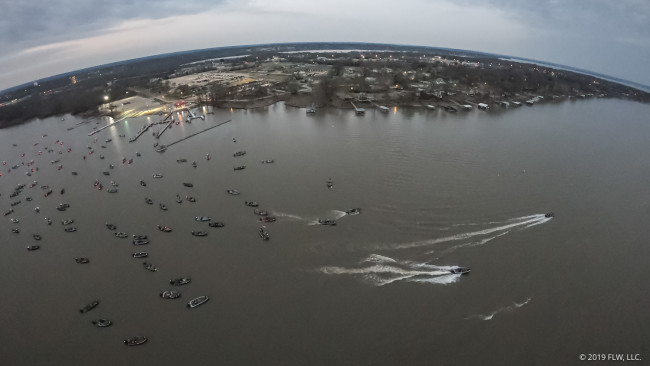 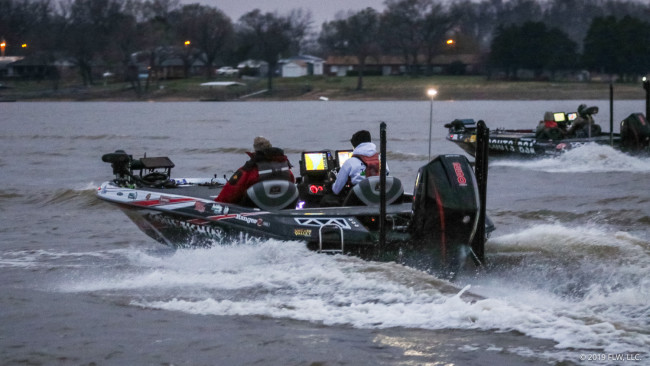 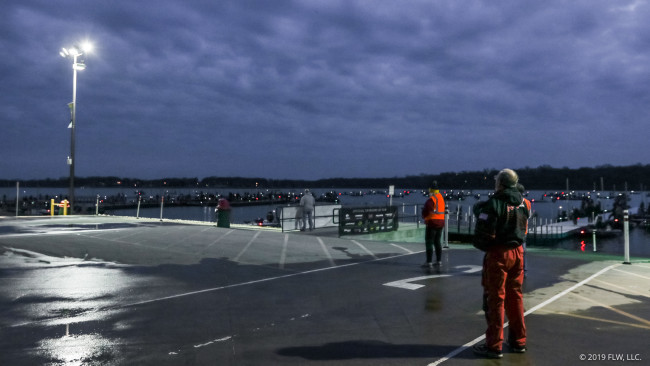 Yeah, it's been a tough practice on Grand Lake, but winning an FLW Tour event is never easy anyway. It's not supposed to be. And whomever wins this one certainly will earn it. The fish are in transition due to fluctuating water levels, and practice reports indicate a lot of the bass are suspended in places where they're hard to catch. That sort of thing happens in the prespawn period before fish start to transition up. What's not clear is when that transition is going to happen. It could start to go down this week. All through practice, the buzz has been that Grand is about to bust wide open. Most of the bass that have been caught have been big, an early indication of what's coming. Catching five of those hawgs has been a real challenge though. The other question mark for the early rounds is the weather. There's rain in the forecast, and potentially some afternoon thunderstorms. If the water rises enough to put more fish in the bushes, those suspenders could slide in to more catchable areas and turn this entire tournament around. Regardless, it's going to be an exciting derby, and someone is going to win a six-figure paycheck as we make the turn into the second half of the 2019 FLW Tour.

Precipitation: 40 percent chance of rain, with scattered thunderstorms possible in the afternoon