It's the final day in Oklahoma 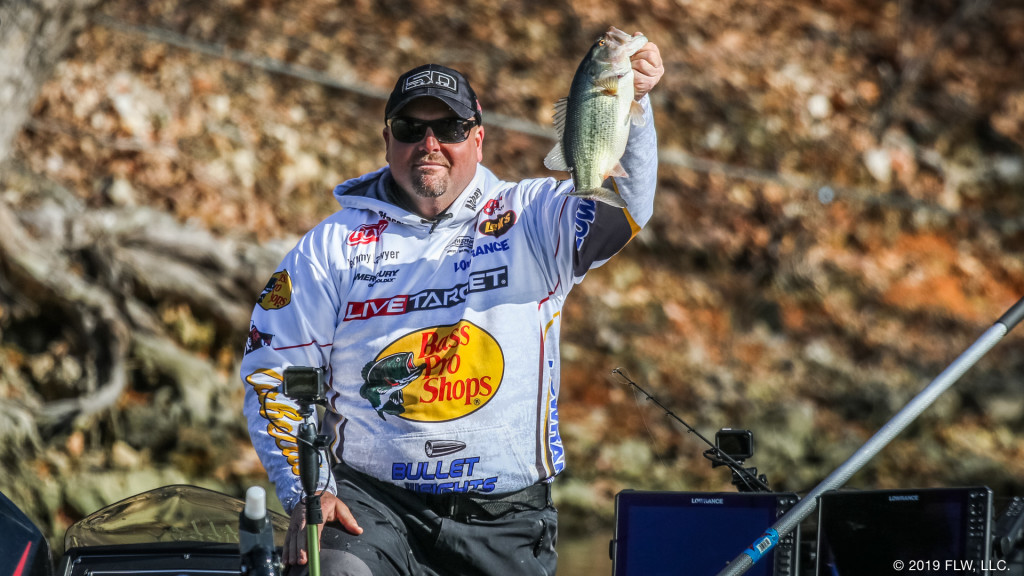 We’re wrapping up the blog and FLW Live Leaderboard here at Grand Lake. If things stayed how they are now, we would be crowning Jeremy Lawyer as the champion, but there's too much time left in the day to call this one. Thrift is in prime position to make a comeback, but we can't rule out others near the top either.

Thanks for follow along this week at Grand Lake. We will see everyone in just a few weeks at Cherokee Lake.

Bryan Thrift was finally able to swing on a good one in Wolf Creek, but the fish got hung up on a dock cable and spit the hook. Having only one fish in the livewell at this point of the day is an extreme abnormality for Thrift. He just needs to keep his head down and keep grinding as he’s only two good bites back of Lawyer with less than two hours to fish.

Up in Elk Creek Bradford Beavers got his fifth keeper. He still needs some big culls to make a push up the leaderboard. 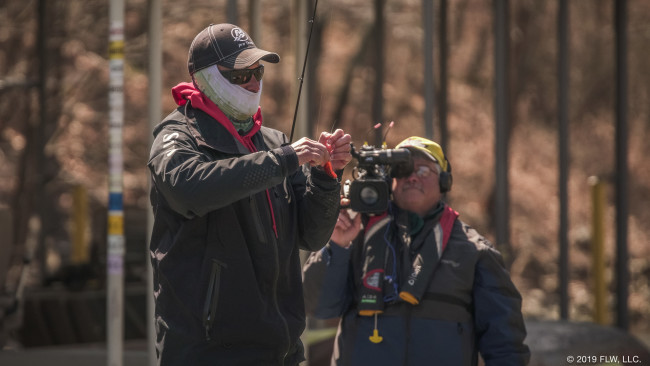 John Cox busted out a small plug and caught a nice 4-pounder. That fish culled John up a few pounds and pushed him back into the top five. Billy McCaghren also caught a fish on a crankbait. Billy is fishing the Shangri-la community hole where he caught his kicker yesterday. Two more keepers and Billy should be right on the heels of Lawyer. On a side note, the leaderboard is really bunched up for those in spots two through six. It’s shaping up to make weigh-in super close.

Thrift did manage to catch a short fish in the back of Honey Creek. After making a couple more casts with no bites, he fired up the big motor and moved more toward the main lake. John Cox completed his limit for about 11 pounds in the back of Duck Creek. Jamie Horton is finally on the board with a 2-pounder. He has been sticking pretty close to takeoff in Wolf Creek all week.

The hot bite from earlier seems to be turning into a midday lull, at least for quality fish. A lot of guys are running around and trying to find new water. A lot happened yesterday afternoon so there’s no reason to believe something crazy couldn't happen here soon.

The current ROY Miles Burghoff finally connected with a 5-pound, 8-ounce Grand Lake kicker. Shortly after, he caught fish No. 6, which culled out a smaller one. Those two catches propelled Burghoff all the way up to third place in the unofficial leaderboard. He will need a couple more kickers to catch Jeremy Lawyer, who still holds a nice lead.

John Cox is back to catching fish. In about a five-minute timespan he was able to land his second and third keepers.

Thrift is yet to get a whole lot going since his first fish this morning. He has been in Honey Creek all day, mostly working a jig and spinnerbait around docks. Now, he is starting to rerun his starting spots. Thrift has about three more hours to figure things out.

Michael Matthee just completed his day-four limit and is now in second place. Fish No. 5, a 3-pounder, was the first fish he has caught from a dock. His bite should stay strong as those darker-colored docks in the cuts he is fishing should continue to warm up. “I tell you now,” he said, “those fish pulled into those coves.” 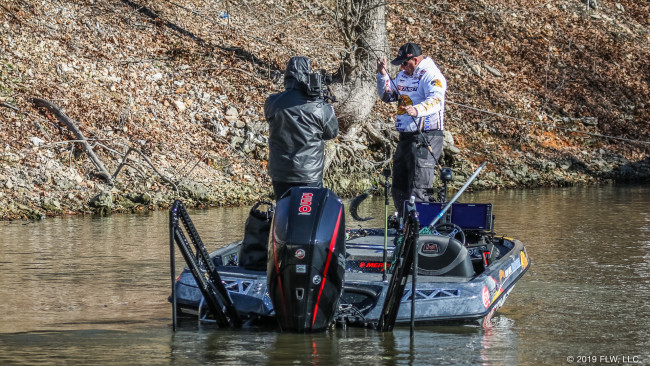 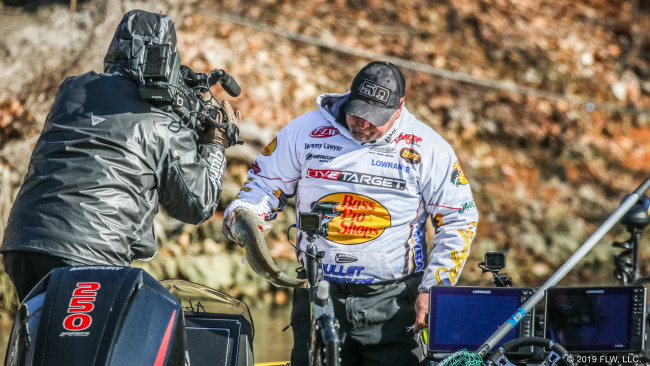 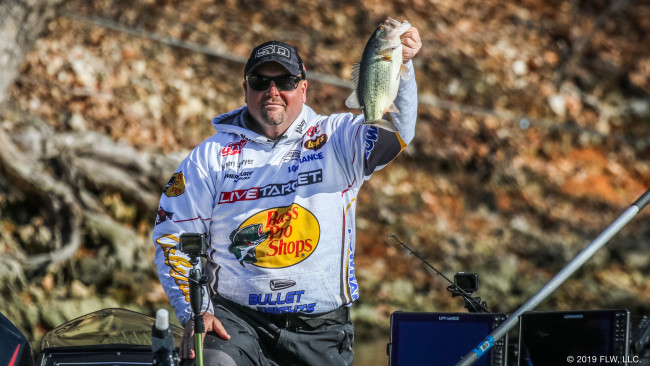 Lawyer’s spinnerbaits keep putting fish in the boat. He was able to fill his limit with a 1 3/4- and a 3-pounder. Right now, he is in the lead by nearly 8 pounds, unofficially. Even though that's a solid lead, Bryan Thrift has four empty spots in his livewell, and he is not a guy you want on your tail.

You can't help but pull for a guy like Michael Matthee. All the way from South Africa in his rookie year Michael is having a wonderful tournament. He just caught a 4-pounder on FLW Live and is super pumped. That fish came from a laydown in a few feet of water.

Billy McCaghren also joined the catch-fest as he bagged a 3 3/4-pounder on his small red crankbait. Surprisingly, Billy caught this fish away from the docks. He says some lone rocks may have warmed up on the bank where the fish came from. 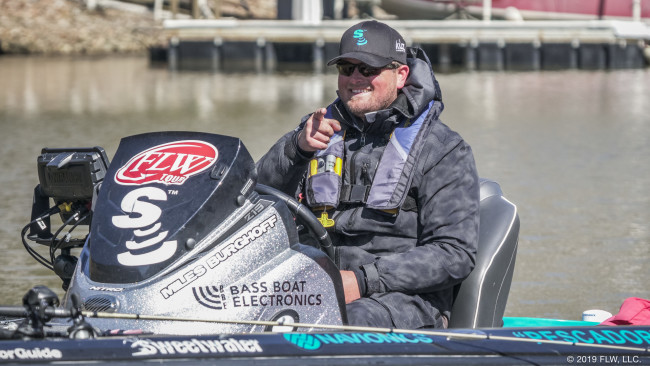 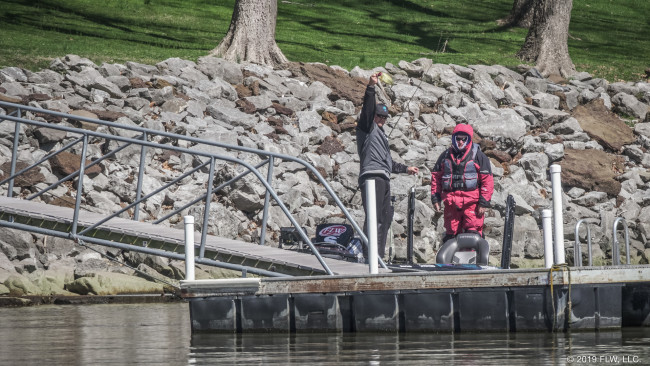 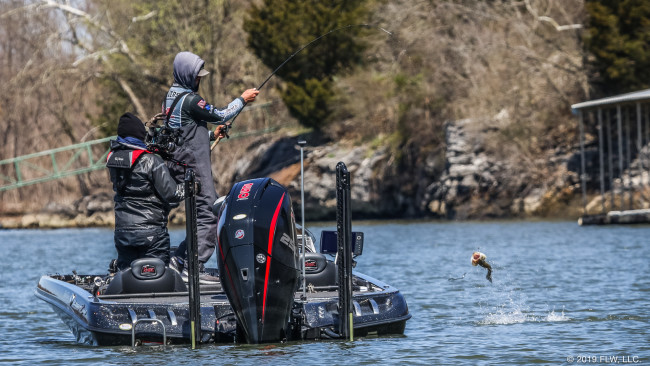 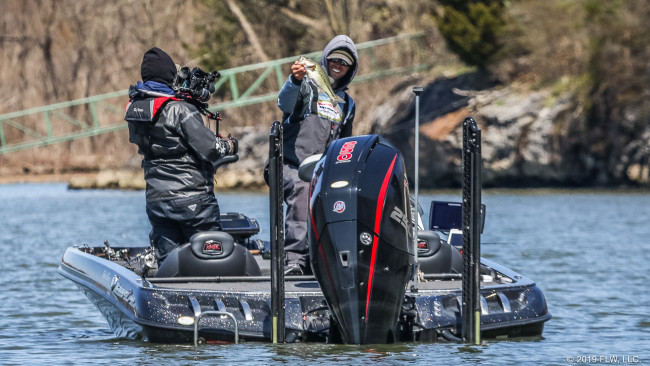 These Grand Lake bass are starting to eat! After making a short move, Jeremy Lawyer smacked a stout 5-pounder under a dock. Beavers just had back-to-back fish catches on the same stumps and laydowns he’s been fishing all week. Miles Burghoff caught fish No. 3 on a crankbait, while his first two came on spinnerbaits. Lastly, Brian Latimer was able to put a 3-pounder in the boat. We should see more fish catch reports coming in shortly!

Update (10:45 a.m.) – Jeremy Lawyer made an adjustment by putting smaller blades on his spinnerbaits. He is also talking about hitting spots multiple times today. He knows where the big ones are, it’s just a matter of getting them to bite. 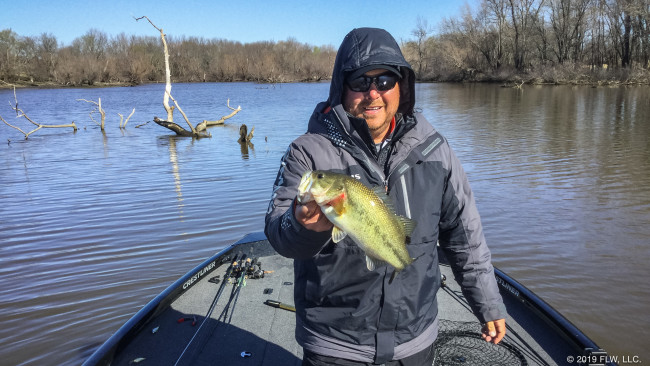 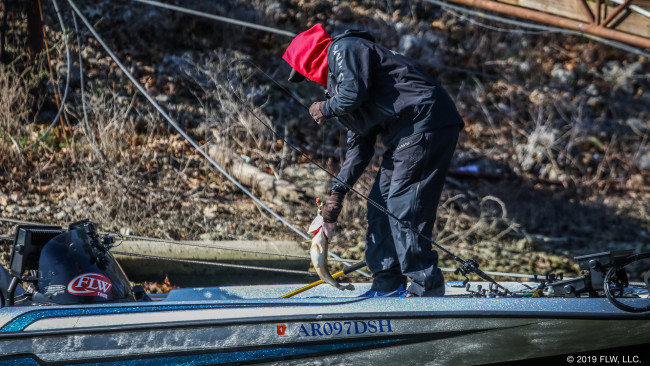 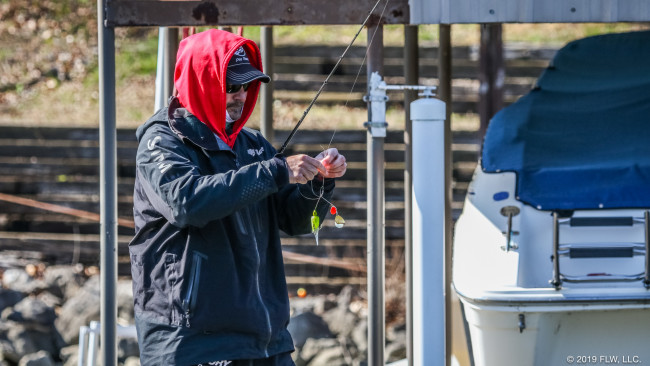 Well, we just had a little flurry of fish catches. Miles Burghoff, John Cox, Bradford Beavers and Billy McCaghren all just put fish in the boat. Billy had to hoist his 3-pounder over a dock cable to land it. “I sure wish I could cast like Bryan Thrift right now if this is going to be the deal,” he said. Looks like Billy might be going all-in on tossing spinnerbaits in hard-to-get-to spots around docks.

If you have been watching FLW Live you might have noticed the sun is starting to get high in the sky. That is for sure helping turn these fish on a little. Also, if you’re watching FLW Live on Facebook or YouTube, be sure to join the conversation in the comments sections!

Apparently Jeremy Lawyer wasn’t lying when he said he was about to catch them. Tossing a his double-willow blade spinnerbait produced his second fish, which happens to be a 2 3/4-pound keeper. There are still no flurries of fish being caught, but it is encouraging to see Lawyer catch a female fish that probably just pulled up. 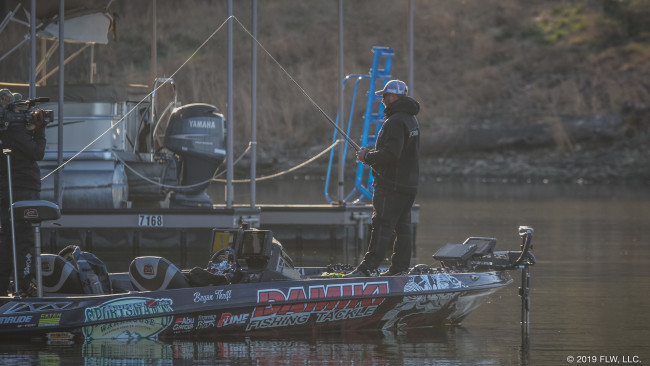 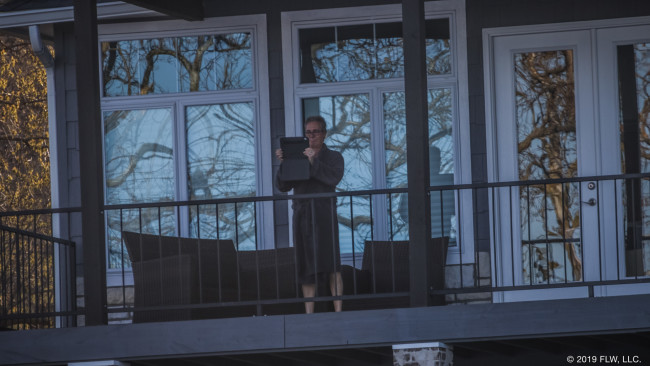 It sounds like Jeremy Lawyer is expecting to get bit pretty good as he just told our cameraman to be ready from here on out. He is still casting at the backs of docks.

If you want to see a master dock angler work a jig, you should turn on FLW Live right now and watch Bryan Thrift. You better turn it on soon because he has about 20 rods on the front deck, so the Thrift-jig action may not last too long.

Miles Burghoff got his first keeper of the day – a 3 1/2-pounder. That is actually the fifth keeper caught from the entire top 10 so far. 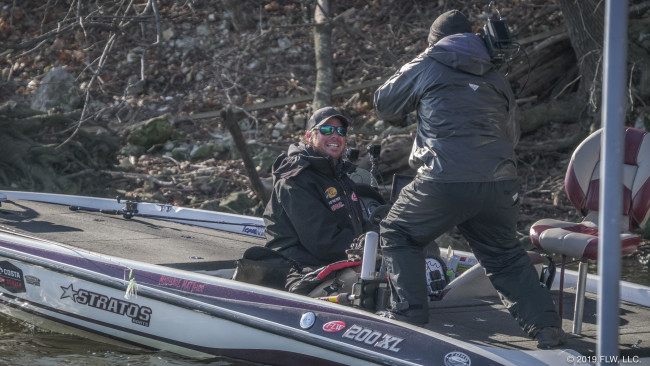 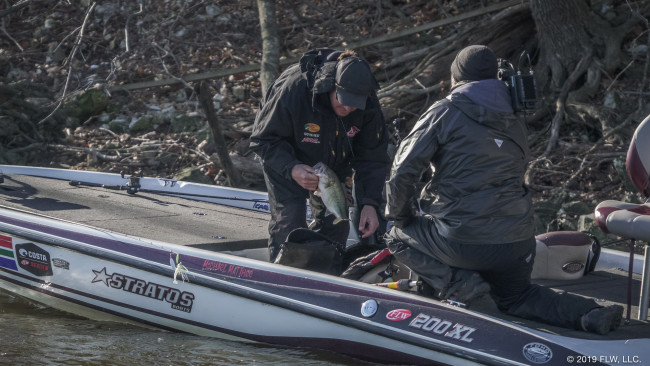 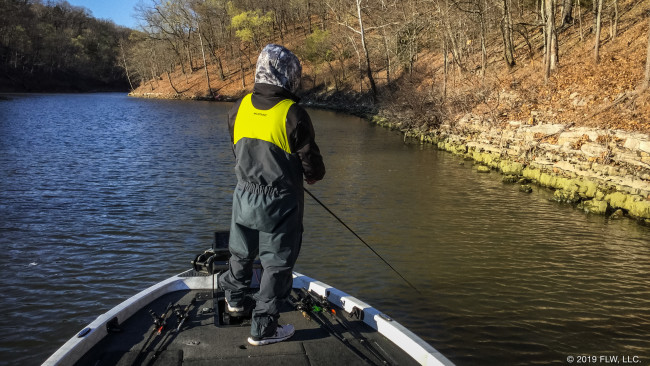 Michael Matthee put his first keeper in the boat. The South African pro was using a double-bladed spinnerbait when he hooked up with the fish on a steep bank. He mentioned that the water has warmed up a degree since he started fishing, which is a good sign for the rest of the day.

Sheldon Collings is getting quite a few bites, but hasn’t been able to hook up. He says that when the water warms up he should be able to get the fish to chew his ChatterBait a little better. Jeremy Lawyer is strictly working the base of docks. He actually is sharpening his spinnerbait when he moves his boat around the main section of the docks. Safe to say the Missouri pro knows exactly where he will get bit. The water temperature just needs to keep rising for the action to pick up.

Michael Matthee is chucking and winding a spinnerbait in the same area where he caught them all week. Specifically, he says his bigger bites have been coming off of black-colored docks. He hasn’t caught anything yet today, and the falling water level is not helping his confidence.

“It’s a whole lot of bad for me. We will see what happens,” he says.

Working the back of docks is definitely the common theme of the morning. Earlier, Thrift mentioned that the bigger fish are ready to spawn on Grand Lake and are pulling up to stage on the docks. Hopefully we see more fish move up with today’s sunny skies and the cold and falling water doesn’t push them back out. 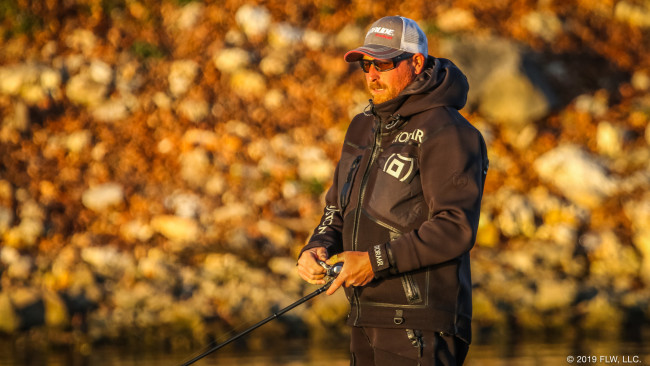 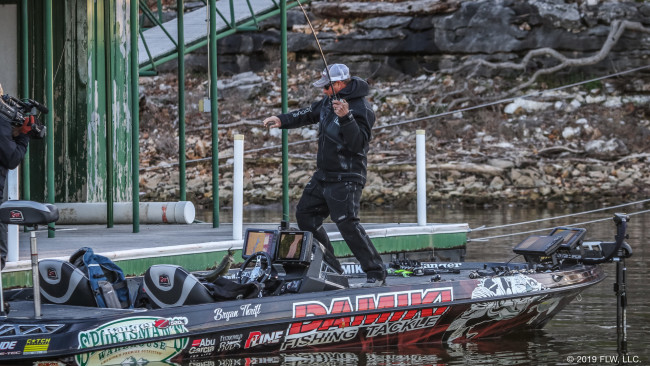 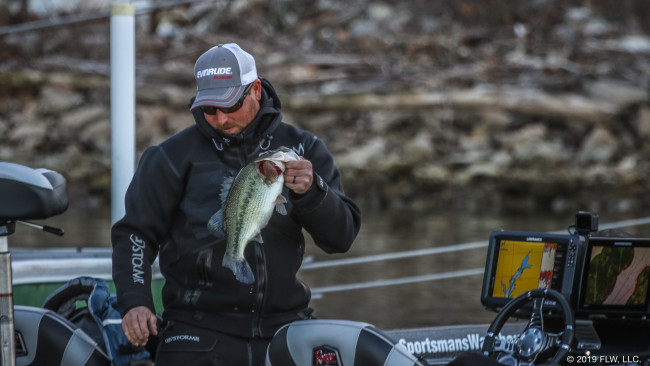 The top 10 have all made it to their starting spots and are grinding away. Thrift is showing he has a champion’s mindset today as he already bagged a 3-pounder off a dock. Bradford Beavers and Jeremy Lawyer each have a 1 1/2-pounder in their boats. Lawyer caught his fish by throwing a spinnerbait in a few mid-lake cuts. Other than those three fish, it has been pretty slow this morning. The morning bite has been pretty much non-existent this week, so things should only get better. 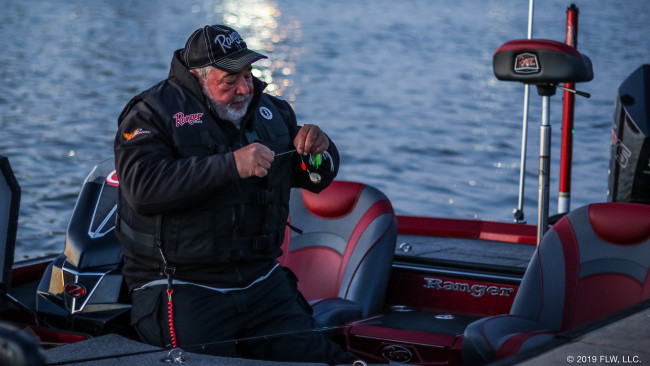 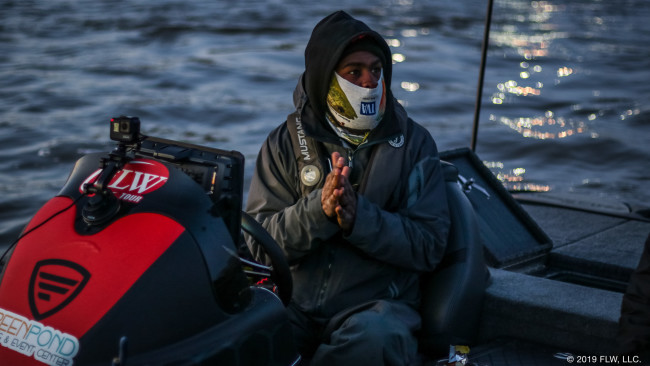 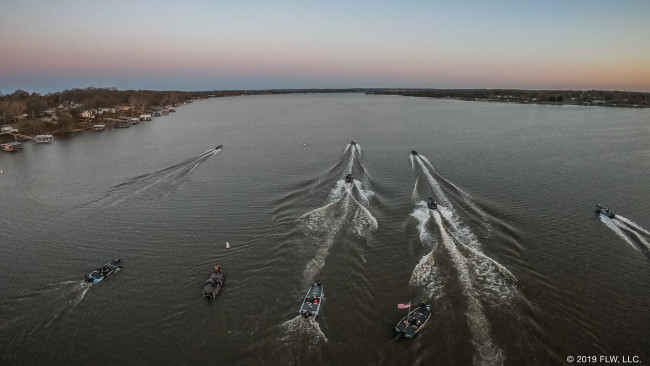 Bryan Thrift has a way of making bass fishing look easy, but today, if Thrift manages to secure his seventh FLW Tour victory, it'll be anything but easy. The temperature at takeoff on the final morning of the FLW Tour event presented by Mercury on Grand Lake was a chilly 31 degrees. And a north wind only compounds the brisk feeling. Luckily, the sun is shining, and there's no precipitation in the forecast.

Regardless of conditions, it's a tall order to expect anyone to catch up to Thrift today. He's a formidable closer and proved last year at Lake Cumberland that he can maintain his composure even when Mother Nature throws awful cold and cruddy conditions at him. Thrif leads Jeremy Lawyer by a pound and change coming into today, but that might as well be a mile.