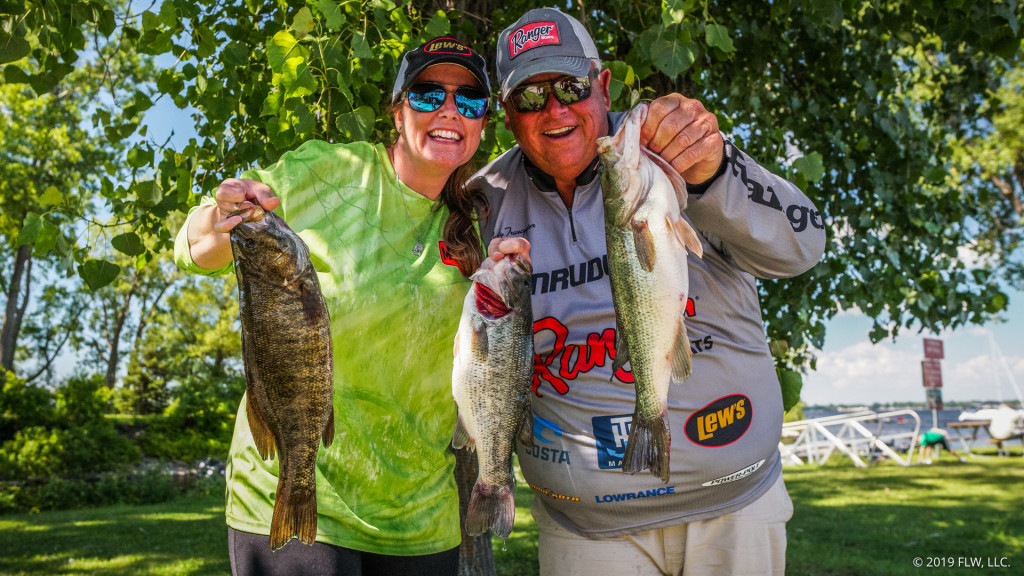 Glenn Browne’s track record at Lake Champlain was stellar. Among a pair of top-10 finishes was a Costa FLW Series win on the big Northern lake that he also considered to be one of his favorite lakes in the country.

However, when Browne passed away last month after a difficult fight with cancer, there was one item on his list with regard to Champlain that remained unchecked. And it had nothing to do with actually competing there.

Glenn never got to take his wife, Melissa, to visit Champlain and spend time together in the Adirondack region. She’s remedying the situation this week by participating in the FLW Marshal program.

Today, she spent the day riding with Rusty Trancygier, a longtime travel partner and friend of Glenn’s.

Melissa says she was motivated to fly to New York by an article she read at FLWFishing.com that listed Glenn’s 2015 FLW Series total of 63 pounds, 8 ounces as the heaviest three-day winning stringer in FLW history at Champlain. Seeing his name in the article reminded her of their plans to one day visit the lake together, and she decided then and there to make the trip up.

“I said, you know what, that’s a sign,” says Melissa about her reaction when she read the article. “We were supposed to come here. If he was feeling up for it, he wanted to come this week, and he wanted me to see the lake.

“He loved this lake, and he won on this lake in 2015. He just wanted me to see this lake and how beautiful it was. And we always loved being on the boat.”

Melissa was able to book a last-minute flight out of Florida at 6 a.m. Wednesday.

“I called Bill [Taylor, FLW senior director of tournament operations] and said if I get there, can somebody bring me on the lake,” she recalls. “He said we’ll figure it out. We’ll make sure.”

Then she called Trancygier, who told her that FLW was still filling marshal slots.

“What better way to see the lake than to be a marshal? So I got here yesterday, and went over to the convention center and said, ‘I’ll be a marshal. Where do I sign?’”

Not surprisingly, Melissa has been impressed with the scenery here at Lake Champlain.

“It is absolutely beautiful. The mountains are breathtaking,” she says. “We went to the north. We went to Vermont. We went down south. It’s just gorgeous. And it was a beautiful day. The weather was so nice.”

Another benefit of riding along in a competitor’s boat today was getting to participate in an FLW Tour takeoff in a way she never had before. She saw it the way Glenn saw it when he was competing.