Largemouths show out on day one 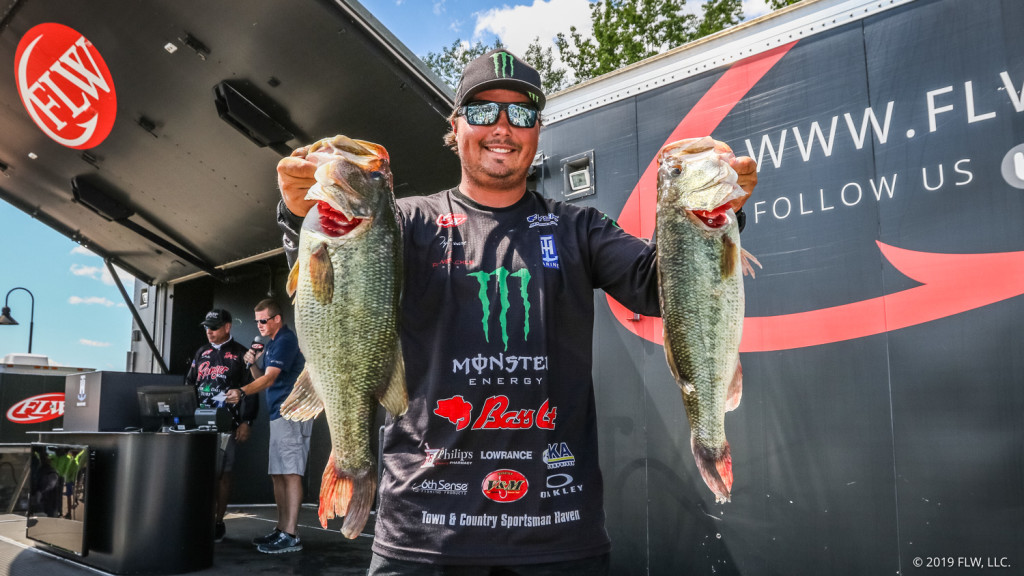 Impressive is the best way to describe the collective day-one performance by the pros competing in this week’s FLW Tour event presented by T-H Marine at Lake Champlain. The top 13 all caught 19 pounds or better, the top 25 weighed at least 18 and the top 38 caught at least 17.

Most impressive of them all on day one was Louisiana’s Tyler Stewart, who’s competing in his first-ever tournament on the big natural lake that straddles the New York-Vermont border. Stewart weighed in a five-bass limit worth 22 pounds, 3 ounces, which is by all means stout on Lake Champlain.

He’s one of a number of pros who spent the day targeting largemouths in order to get over that 18-pound mark, but he had one bonus smallmouth in his bag today, too.

“I had about 21 pounds probably, and I was on my way back, and I stopped and threw a Keitech around and ended up catching some smallmouth that culled one of my smaller largemouths,” Stewart says. “I was actually just planning on going all in on largemouth, but I had a little extra time, so when I got back I messed around with that and ended up making a cull, which was pretty crucial.”

Stewart says he didn’t have much company in his primary area today. His most notable challenge was a yacht wake that he hit on the way to his starting place. The impact resulted in a busted front graph and some damage to his Power-Pole bracket.

The damage not only cost Stewart a little time, but it made him question whether he ought to stay closer to the ramp in Plattsburgh. Thankfully, Stewart trudged on and ended up getting into decent action pretty quickly.

With a flipping stick in his hand, Stewart caught most of his limit by 10:30, replaced a 2-pounder with a 4-pounder around 11, and then left his largemouth waters alone the rest of the day.

Even without that bonus smallie, he knew he already had a good enough limit to be in contention. There was no reason to wear out his best water.

“In practice I wasn’t getting many bites at all – just quality – so I really didn’t want to catch anything that I might need tomorrow,” Stewart adds. “I only have a couple small areas, so that’s basically what I’m doing; just flipping them up in pretty shallow water.” 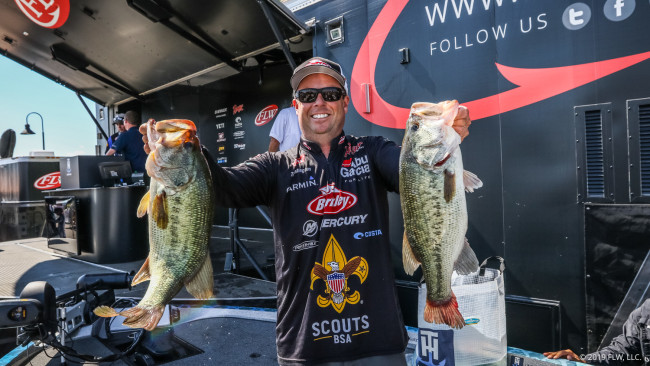 Tom Redington calls Texas home, but it’s more of an adopted home, if you will. He grew up in Illinois and lived awhile in Wisconsin. These Northern largemouths are nothing new to him, as he proved on day one with a 20-pound, 7-ounce limit of all green bass.

Redington actually stopped over at Cayuga and Oneida on his way to Champlain to “try and get in the smallmouth rhythm.” It wasn’t happening, so he reset and dialed in on largemouths.

“When I’ve done well here in the past, it’s always been a largemouth deal,” Redington says. “I grew up in the Upper Midwest. This largemouth fishing is what I grew up doing. It’s really similar.”

According to Redington, there are still largemouths in all three phases of the spawn, likely due to the inconsistent weather this spring and fluctuating water temperatures around the lake. He caught some that he thinks were on beds, some guarding fry and some still coming in to prepare to spawn.

While Redington would like to find a wad of postspawners – the kind of fish he says he can Power-Pole down on and load the boat with – most of what he’s found has been less predictable and a little more scattered.

“I would say it’s not a location pattern, and it’s not a lure pattern; it’s a spot deal,” Redington adds.

Critical to his limit was a pair of 4 1/2-pounders. He spent part of the day trying to catch another and upgrade, but when he was pitching back 3 1/2-pound fish, Redington decided to let his best waters rest and save the fish for the coming days. 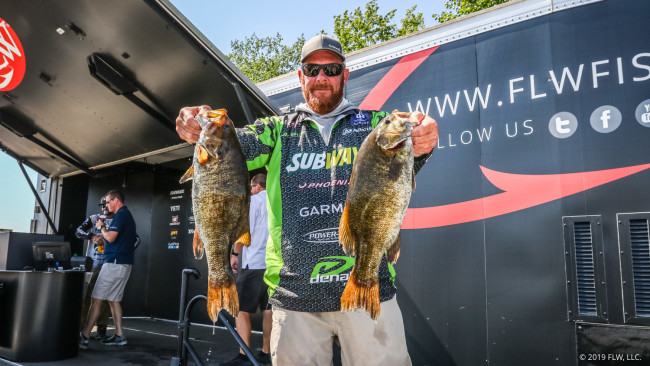 Indiana pro John Voyles reversed the trend set by the other two pros at the top of the standings and weighed in four smallmouths and one 4-pound largemouth that he caught right at the end of the day.

“I caught some fish early, and then I fished for two or three hours and finally pulled on a spot, and, I mean, it was lights out,” he says.

The smallies Voyles found were schooling and feeding aggressively. He caught them every cast for a while.

“I hope they keep coming,” he adds. “What I caught them on today, I hadn’t even been throwing in practice.”

Voyles says he just had a feeling that he needed to pick up something different to try and get a bigger bite. His feeling was right on.

Tomorrow, he’ll see if the spot can produce similar results to get him into the weekend within range of a W.

“There are a lot of fish there,” he says of his main spot. “I don’t know how many big ones are there, but we’re going to find out tomorrow.” 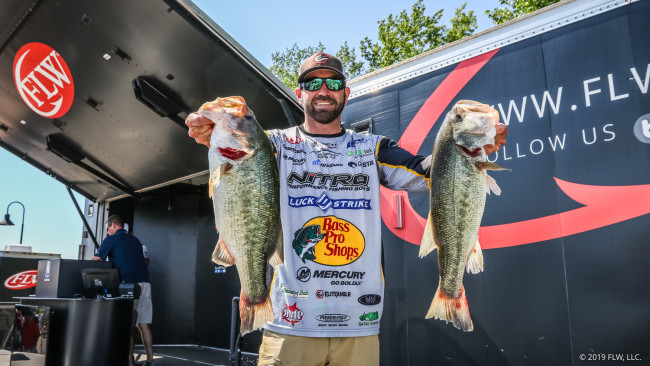 Casey Scanlon, who was the fourth pro to crack 20 pounds, was in the “all largemouth” club today.

“I just kind of bounced around,” he says. “I had several different places I had some confidence in. I didn’t get bit very good early and made a few small adjustments and started catching them. I didn’t catch them out of any one area; just kind of bounced around and got some of the right bites. I’ve got some stuff left that I didn’t touch. I think, hopefully, some of these spots will reload.”

Scanlon is incorporating three patterns into his game plan, each one based on the type of cover he encounters in the parts of the lake he’s fishing. Covering water and throwing a variety of baits, he says, was key. 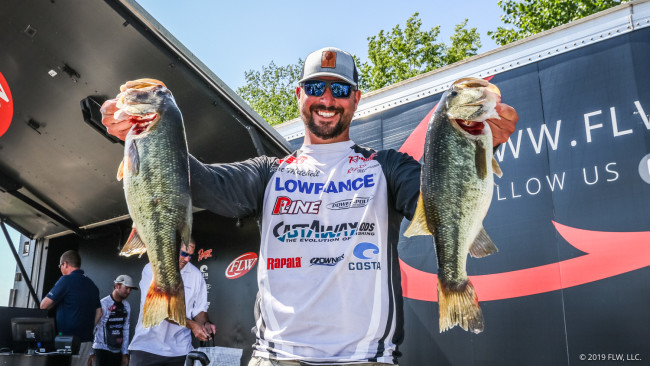 Lake Champlain has Delaware pro Kurt Mitchell feeling right at home this week. He also weighed in five largemouths and has been committed to the green fish all week long.

“This is just on the tail end of the smallmouth spawn, and that’s usually when the smallmouth start dropping off a little bit,” he says. “Plus, I love fishing for largemouth up here. This is my favorite place in the world to catch largemouth.”

Mitchell says most of the largemouth bass are postspawn.

“Right now they’re just trying to feed up,” he adds. “They’re gorging on big shad, and there’s a little bit of an alewife spawn going on. They’re all going up in that stuff.

“It’s easy to catch small ones, but to get the bigger ones you’ve got to work for it a little bit.”

Mitchell basically weighed in a bag full of 4-pounders by keying on a mixture of rock and grass – not just one or the other.

“The biggest deal with largemouth is getting a kicker. I didn’t get a kicker today,” he adds. “There’s a lot of 5- and 6-pound largemouth in this lake, and I just didn’t get one today.”