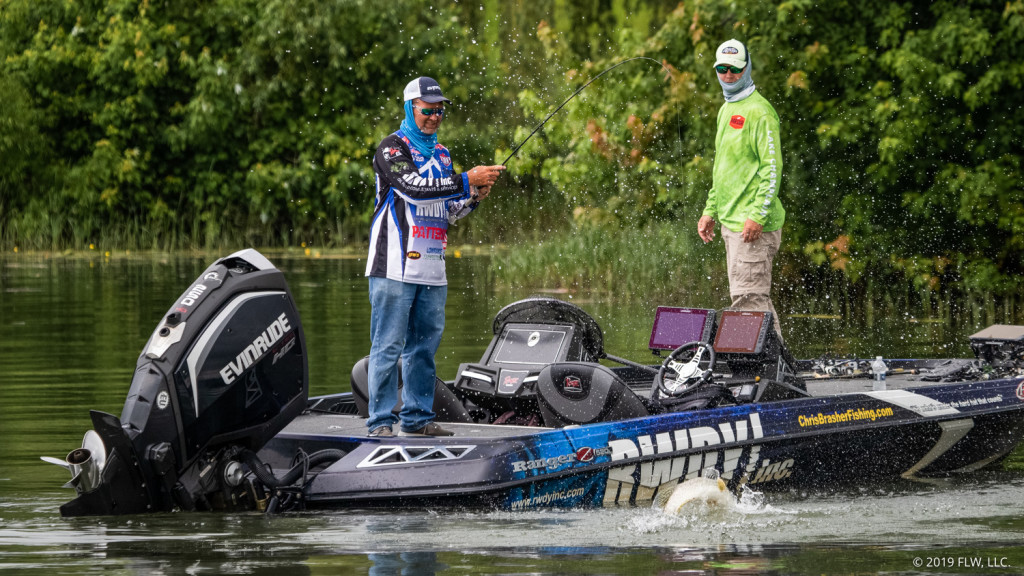 Angler of the Year Story

Polaris Rookie of the Year Story

Only a few pros are left in Ticonderoga. The rest have started to make their way back up towards Plattsburgh. Eric Jackson is the southernmost angler on the lake at the moment. He’s still up the La Chute River. Just outside of Plattsburgh, the white caps are rolling straight south, so things should be pretty rough in the middle of the lake. Not to mention, there are a few random storm clouds blowing through too.

Since there's not a whole lot of fishing going on we’re going to shut down the blog for the day. Unless the Ticonderoga guys pick off a few along the way back to the ramp, the unofficial leaderboard won't move much the rest of the day. We will keep the leaderboard open until 2 p.m. ET just in case, though. There are basically four or five pros who still have legit shots at winning this tournament. Be sure to come back at 4 p.m. ET to see what happens!

Bryan Thrift was able to upgrade after catching a solid largemouth on the docks. He said it culled him up a few ounces.

Eric Jackson’s persistence on his juice finally paid off. E.J. pulled a nice 4-pounder off of one of his favorite trees. A 3.5-pounder is his smallest fish in his box currently, so we know he will have a minimum of 17 ½ at today’s weigh-in. “The reality is, I don’t know how much weight I’ve got. I forgot to weigh a few of them.” Seeing what he actually has will be interesting to say the least.

Casey Scanlon just stuck a pig, too. He’s been sticking around in Ti and making the fish pay. While looking in his livewell to see what he has, Casey said, “It’s better than I thought.”

Casey Scanlon was finally able to upgrade with a 4-pounder. That leaves a 2 ½ as the smallest fish in his livewell. He has about a half hour or less to fish before he heads back up north.

Daryl Biron now has a limit of fish in the boat. His best five fish go for 15 pounds. He really needs a big bite ASAP. Remember, he could potentially have an interesting ride back with his motor acting up on him.

Bryan Thrift decided to hit some docks up in Saint Albans Bay. So far, Thrift has been unable to upgrade.

AJ Slegona’s trolling batteries are officially dead. He has resorted to drifting the rest of the day. With most of the Ticonderoga guys needing to dedicate time to running north, Thrift and Dudley will momentarily be the only anglers fishing at full strength. 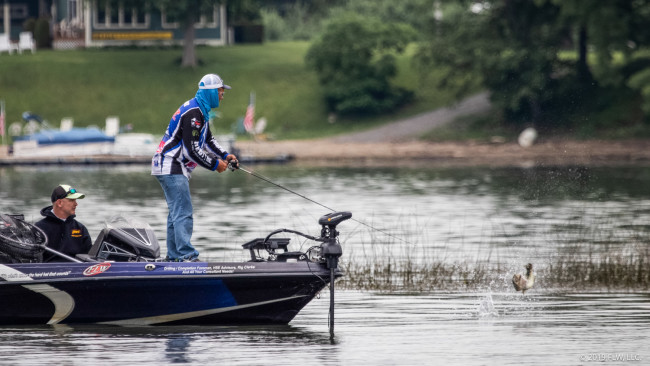 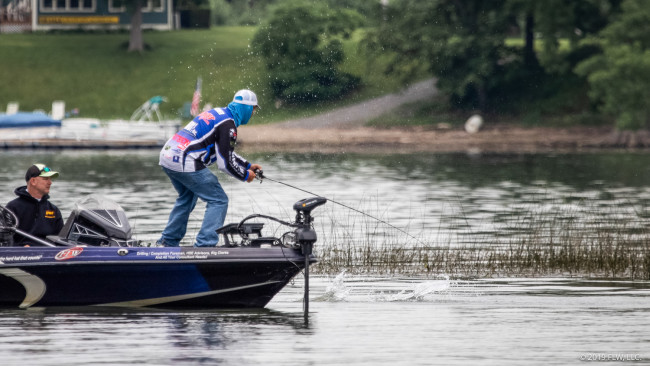 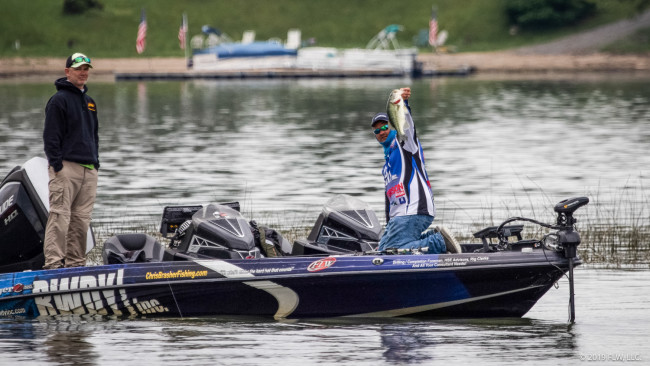 Bryan Thrift has been catching and culling fish all day long on the north side of Champlain. His marshal thinks that he has around 16 pounds in the boat. Assuming that is lowballed a little (in classic Thrift fashion), he’s definitely close to taking the lead with just one more quality upgrade.

Brasher is crushing 3-pounders left and right, but they don't help his cause. The 5-pounder he just landed, however, certainly will. We have him unofficially at 20 pounds. If that’s close to his actual total, he’s leading by more than a pound.

Hensley Powell is still searching for another big largemouth to help grow his limit. He’s starting to work towards the north end of Ticonderoga. Casey Scanlon is also down in Ti and has managed to cull up to 15 pounds. Tyler Stewart is getting desperate and says he will stick it out in Ticonderoga longer than he anticipated. Lastly, Eric Jackson has gone cold, but is one bite away from regaining the lead.

Daryl Biron put fish No. 2 in the boat – a 4 ¼-pounder. He was slow soaking a worm when he got the fish to eat. Three more quality bites and Daryl will be right back in this thing.

David Dudley is up over 15 pounds. He’s playing the smallmouth game still. The most recent fish he caught bit a large white swimbait. Dudley needs more 4-plus-pounders if he wants a shot at catching up to the largemouth guys.

The rain and wind are starting to pick up in certain areas on the lake from Plattsburgh all the way down to Ti. The pros down south will need to take into account what could turn into some pretty interesting running conditions. Daryl Biron, who is fishing in Ti, mentioned that he’s having some engine problems to worry about, too.

Christopher Brasher is having another good day down in Ti. He’s got about 17 ½ worth of largemouth in the box . Topwaters, squarebills and wacky rigs have been the ticket for him. His smallest fish in the livewell is 3 ½ pounds.

Tennessee pro Eric Jackson has hit a bit of a wall in the La Chute. The only fish he’s caught in awhile have been small (or pike).

A.J. Slegona is up to a 16 ½-pound limit worth of smallmouths. His trolling motor batteries are already toasted because a breaker blew last night when they were charging. He’s using his big motor’s alternator to charge them while jumping from spot to spot. 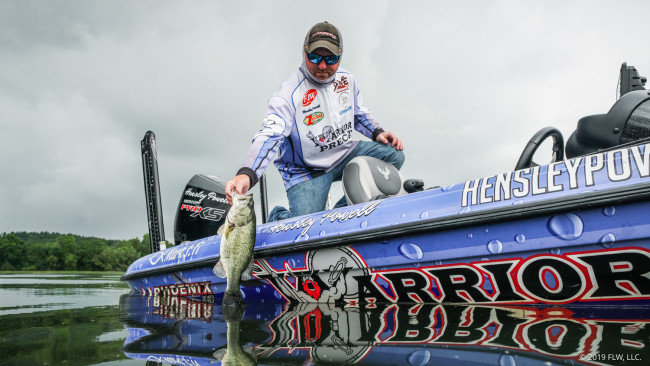 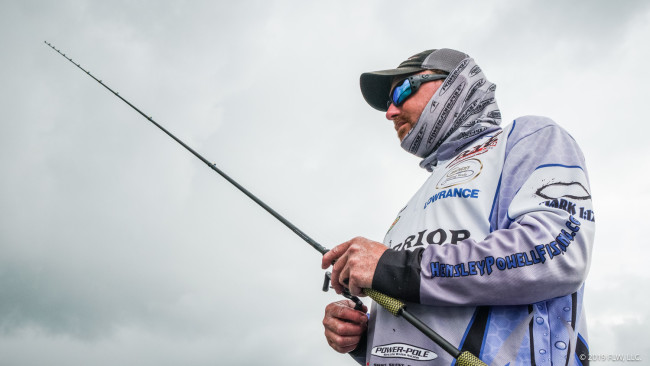 Hensley Powell just took the unofficial lead from Eric Jackson. Powell has been steadily catching quality fish all morning. The last one he caught was a 4-pounder. A ChatterBait is still his weapon of choice in the grassy area he’s fishing in Ti. If that doesn’t work, Hensley is soaking a wacky-worm near the bottom. Not too far away, Casey Scanlon just missed a big one. Scanlon has close to 14, but he’s still going to need quite a bit more. 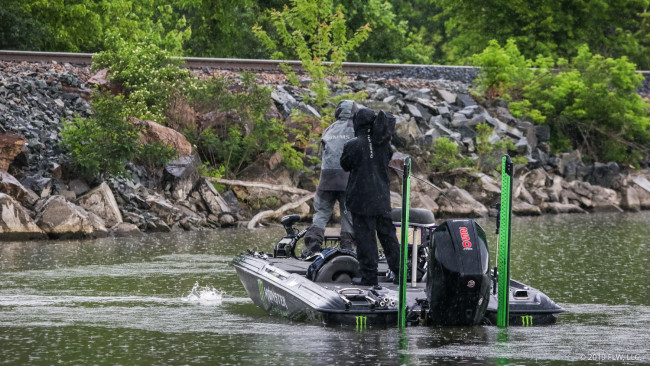 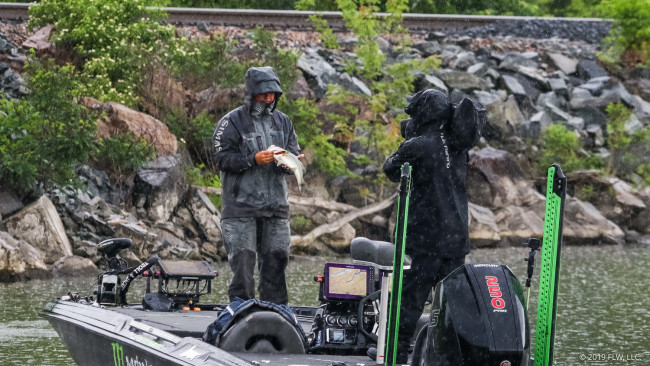 Eric Jackson has been the star of FLW Live this morning. He’s been putting on a show so far, and we’re guessing he has about 17 after a recent cull. He’s on the spot where he caught a bunch of 4-pounders this week. One or two of them big girls could be E.J.’s way to the $125,000 check.

Tyler Stewart was stuck with only one fish in the box for awhile, but just caught a 3-pounder. His spots have really been slammed hard this week and aren't reloading as fast as he needs them to. It’s also raining in his area now. Still, he's only three-good bites away from having a good bag.

Hensley Powell has gotten off to a rocking start down in Ticonderoga. He’s amassed a limit worth over 17 pounds. It looks like his fish have been hitting a vibrating jig pretty well.

Eric Jackson decided to move up the La Chute River in search of some fresh fish. His move should also help reload his area, assuming the other anglers in the area don’t catch them. He’s unofficially leading the tournament with his 15 ½-pound limit. He thinks if he can weigh-in 20 pounds, he will have a good shot at winning the tournament. Jackson has a long run back to the ramp this afternoon and if the wind picks up, he’ll need some extra time to get back. 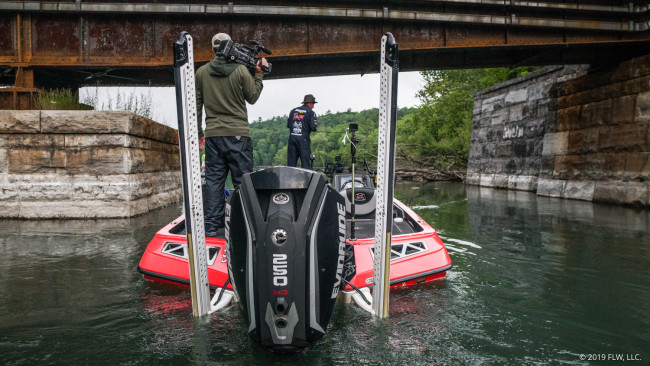 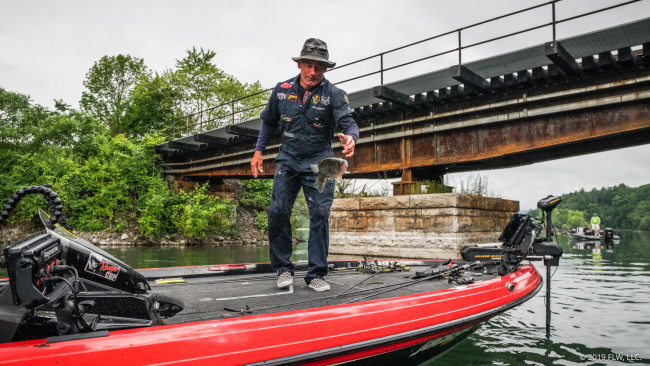 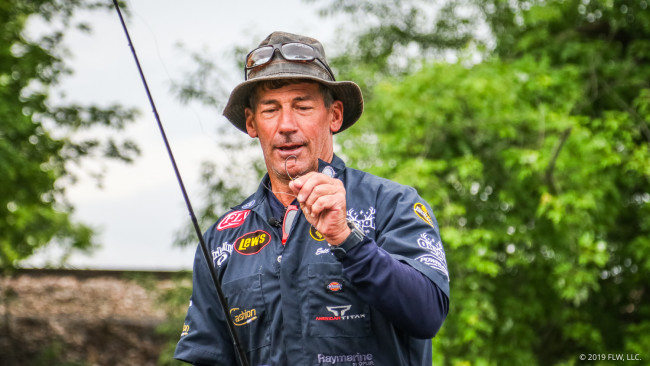 E.J. is back fishing in his spot up the La Chute River, but he too is running into some local pressure. Eric and the other boat are fishing right on top of each other. “You’re on TV in front of like a million people right now,” Eric said to the locals, referring to FLW Live. He’s scraped up a nice limit so far, which is a good start considering he is getting second crack at some of his best spots. His fish seem to be reloading fairly often, so he ought to be able to upgrade throughout the day. 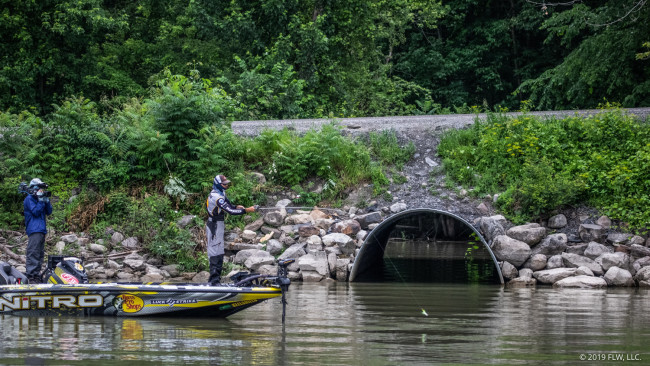 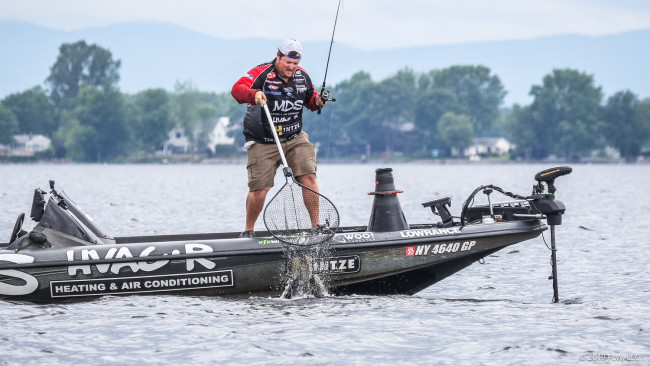 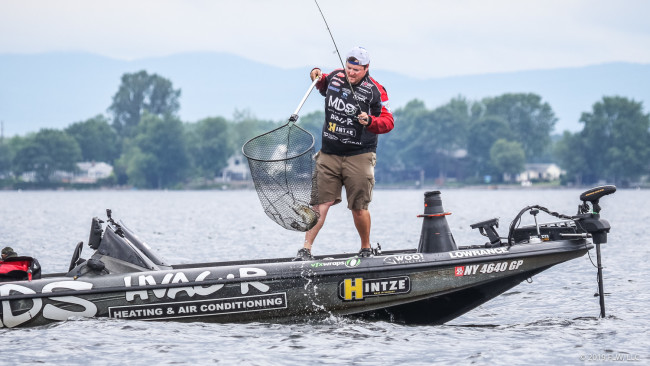 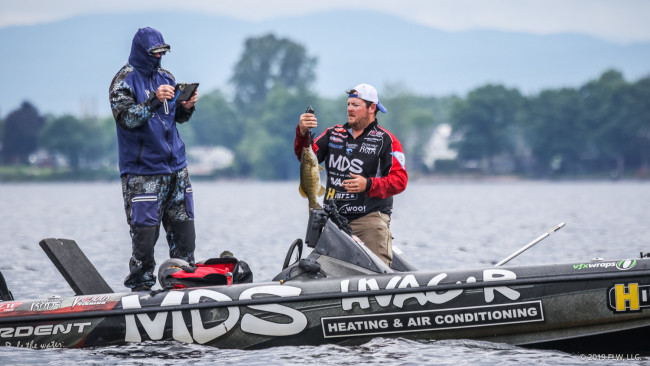 Tyler Stewart is really going to have to battle through adversity if he wants to get the win today. After the local angler from earlier moved off Stewart's spot, a couple other folks on shore started heckling Stewart for coming in and fishing the area. Tyler seems less than thrilled about the whole deal and will need to mentally hit the reset button to have his best day today.

Up the lake, A.J. Slegona is off to a decent start. He’s one of the few anglers left that’s targeting spawning smallmouths. So far, he has a limit of fish that go about 14 ¼ pounds. AOY David Dudley also has a few bronzebacks in the livewell.

Casey Scanlon has yet to get a bite this morning. One of his main deals is to target schoolers that are chasing baitfish. He did in fact find a school of baitfish busting on the surface, but Casey couldn't connect with anything. “There’s too much shad activity to not have a bite.”

The Ticonderoga guys have finally arrived to their starting spots. Christopher Brasher has been lighting them up since he started fishing. The Texas pro has bagged 4, 3, and 2 ¼ – pounders in a matter of minutes, followed by a 2 ½ and a 2. “He’s putting on a topwater clinic,” according to his marshal.

Tournament leader Tyler Stewart got to his first spot only to find a local camped on it. Luckily for Stewart, the local was kind enough to back out of the spot. Casey Scanlon has also wet his line down in Ti, but has nothing to show so far.
Thrift made a few more small culls on his starting spot, but now his bite tapered off. “Alright, we’re done boys.” He was bombing around a spook and catching all largemouths. Here’s a video of him doing the exact same thing yesterday. 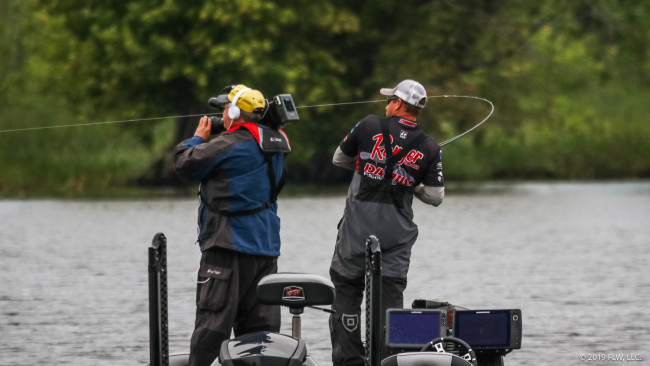 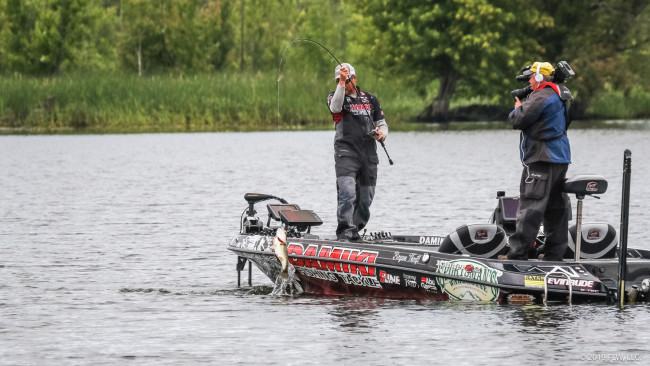 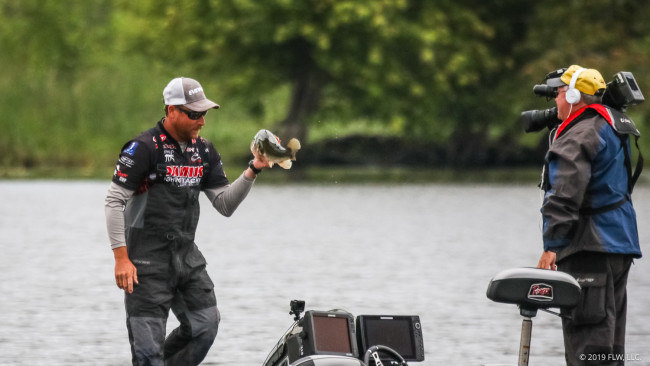 Bryan Thrift didn’t waste any time getting his first five keepers. They’re all of the green variety, and they’ll go for somewhere in the neighborhood of 12 ½ pounds. Thrift didn’t make a long run like everyone else in the top 5. They’re all still on their way to Ticonderoga, and on-the-water reporters say none have arrived just yet. We expect them to be pulling up to their first spots shortly. In the meantime, Thrift is working on upgrading. 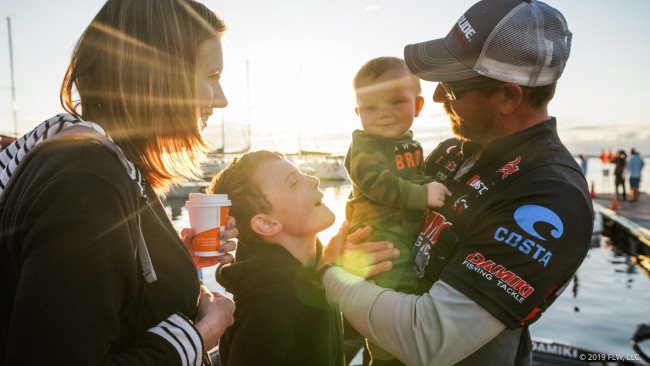 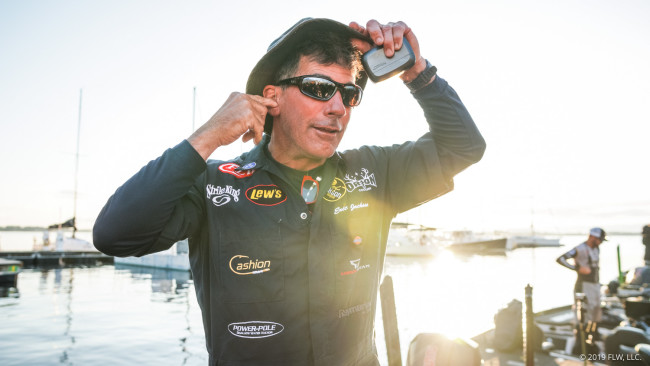 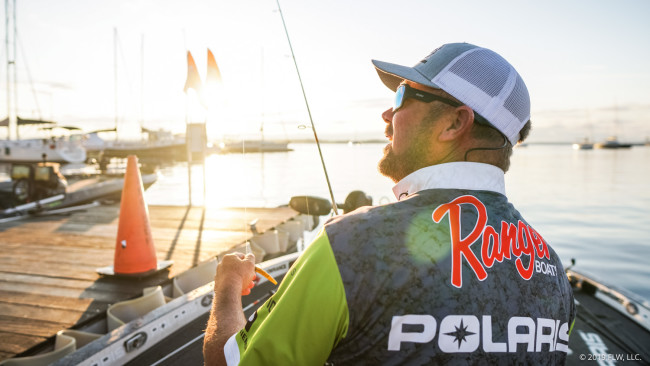 Yesterday saw the crowning of the FLW Tour 2019 Angler of the Year (David Dudley) and Polaris Rookie of the Year (Ron Nelson). Today, there's nothing left to do but crown a champion for the Tour's last stop of the season.

Speaking of the now four-time AOY, Dudley enters Championship Sunday in sixth place and 3 pounds, 4 ounces off the lead. He'll need a monumental day to complete the comeback, but crazier things have happened, and Dudley's last AOY (in 2012) did come at Champlain, and he won that event.

Dudley will need to overtake several anglers, though, including Tyler Stewart, who has led wire-to-wire to this point. The second-year pro has a 1-pound, 14-ounce lead over Casey Scanlon, though the remaining 10 anglers all have a shot at this point. As Champlain has shown thus far, four- and five-pound-class fish are the ticket to standing out from the rest of the pack. Whoever finds the most of those kinds of fish today is going to be hoisting a big check when weigh-in concludes.

Rain never really moved in yesterday, despite forecasts calling for that as a possibility. Today, rain is almost a certainty, and with it will come winds that could really lead to choppy conditions on Champlain. With four of the top five anglers in the current standings making the run south to Ticonderoga, it's going to take a lot of big green fish to make the run worth losing so much fishing time.

Stay tuned to our coverage blog for day four and be sure to check out the FLW Live feed throughout the day for complete coverage of Championship Sunday.

Sky: Overcast with some rain