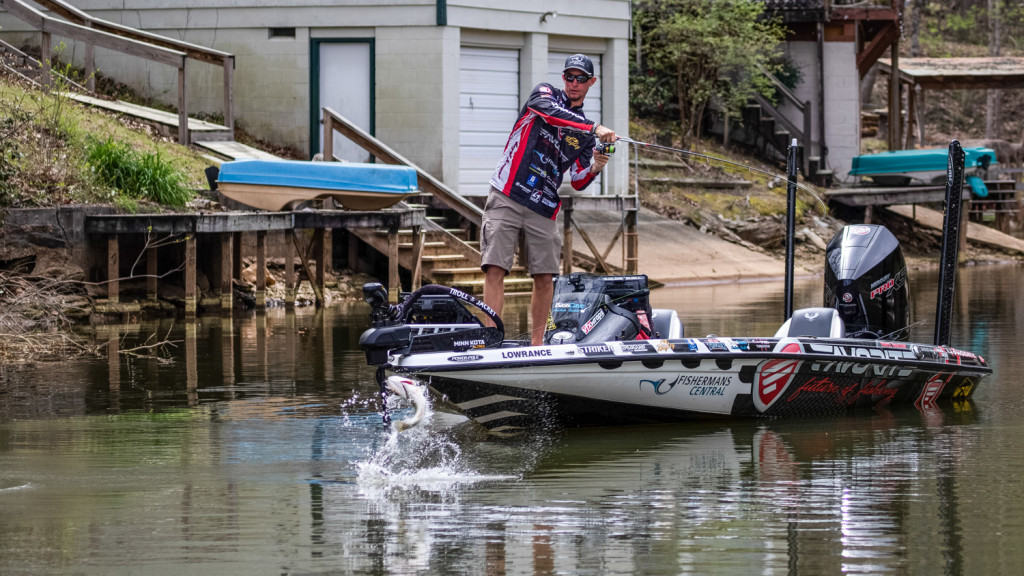 Spotted bass dominated the Tackle Warehouse Pro Circuit on Lake Martin, but they didn’t win it.

Sure, the sheer abundance of spotted bass in Martin left most pros’ thumbs bloody and raw from catching so many fish. Yet, it was the key largemouth that really separated the field, and what helped Jason Abram earn his first victory.

Still, spotted bass definitely were key for just about everyone in some capacity. Here’s a look at how the rest of the top pros used spots to their advantage. 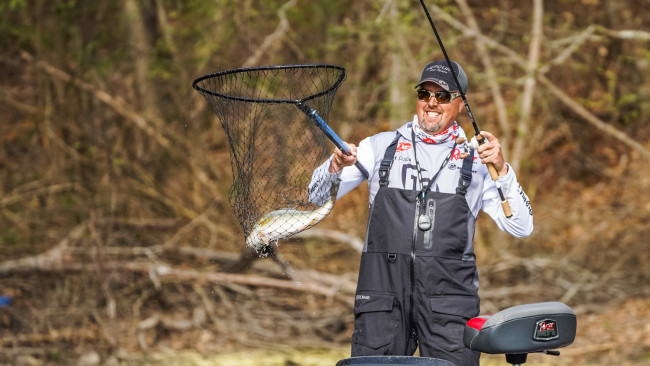 To win a major event, everything usually has to line up just right. Unfortunately, that definitely didn’t happen for Ron Nelson. In fact, with everything that went wrong, it’s pretty remarkable he was able to come so close to winning in the first place.

“I had a lot of flaws and mistakes this week,” says Nelson, who leads Angler of the Year race. “This tournament was painful every day.”

Nelson originally planned on targeting offshore spotted bass coming into the event, but when he started seeing 6- and 7-pound largemouths on beds, he easily pivoted to them to start. Unfortunately, things started going wrong almost immediately.

“I caught two 7-pounders in practice,” says Nelson. “So I knew where some big ones were, and I had a big, big one marked. I went to her first thing, and she had a 2-pound buck with her [on day one]. Well, I was so far off her, that I couldn’t really see. I just thought the buck kept eating it, and I didn’t want to catch him.

“So I got in closer, and then I see the big, big was gone, but a 5-pounder had replaced her, and that’s what was biting. Well, when she saw me she left. So I let it sit hoping she’d come back, and when I checked again, the big, big was there again. But she would keep swimming off.”

That’s how his tournament went, with him losing 3-5-pound class fish every day in some pretty unique ways, too. In fact, by the final day, he was so paranoid of losing fish he had a 4-pounder he watched eat his Keitech Swing Impact FAT four times before setting the hook, because she was facing him every time she ate.

A big key for him on that swimbait – which he used both for blind casting and sight-fishing – was using both weedless and regular 1/4-ounce heads. With the water dropping so much during the event, the fish up shallow got extra spooky. So he used the weedless head so he could cast his swimbait up on shore and quietly bring it into the water without making a splash.

Despite everything, Nelson actually had one last shot at the win Saturday, when he found a 4-pounder locked on a bed late in the day that actually bit twice but he didn’t pin. Unfortunately, he was worried about being late to check-in and left her, only to arrive with 5 minutes to spare.

“Who knows what would’ve happened if I spent 5 more minutes on her,” says Nelson. 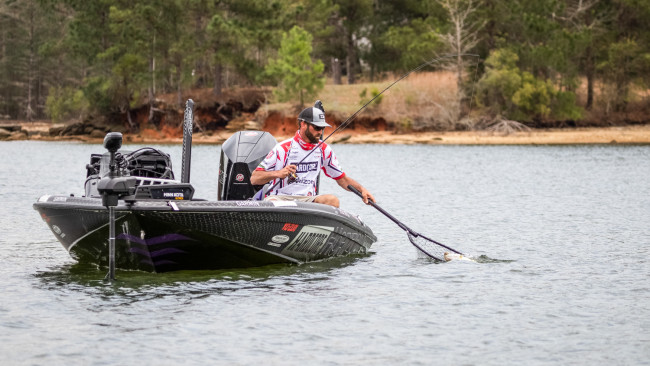 “I was just searching around with my Garmin Panoptix LiveScope for single fish swimming around suspended,” says Shuffield. “Then when I saw one, I’d pitch out a drop-shot with a Zoom Super Fluke Jr. (disco green) and catch him.”

Fishing on the lower end, Shuffield hit dozens of spots, all with drains leading into spawning pockets. Once in one, he’d just wander around watching his screen to see if something came into the cone, which he notes took a lot of practice to get the right distance. Still, that practice paid off, as he complained he could barely hold fish by the end of the tournament because his thumbs were so raw.

Unfortunately, while he could see the bigger fish early on in the event, as the tournament wore on the fish tended to group up more and hang tighter to the bottom, making it harder for him to identify key fish to catch. He even caught a few blind casting his drop-shot around, which he threw on Yo-Zuri Top Knot fluorocarbon.

“The postspawn fish started cycling out and joining those loners,” says Shuffield. “When they got tight to the bottom I just couldn’t see them anymore. So I had to catch a lot of pound-and-a-halfers to weed through and catch a good one.” 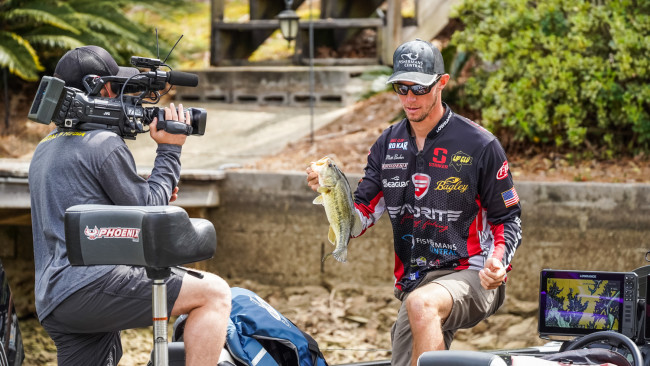 Sometimes it’s better to be lucky than good, and Matt Becker considered himself quite lucky this event.

Originally, Becker focused solely on sight-fishing on the lower end, stumbling upon one pocket with multiple good fish on beds and a handful more cruising around.

Yet, once that spot began dwindling due to falling water levels – in fact, he actually saw fish’s backs out of the water while sight-fishing for them – Becker began running docks, which resulted in this lucky and epic fish catch.

Becker thanked his 20-pound test Seaguar Smackdown braid to 10-pound test Seaguar Tatsu fluorocarbon for that catch, which came via a wacky-rigged Yamamoto Senko (watermelon red) on a No. 2 Trokar weedless hook. He used a 5-inch Senko for docks and a 4-inch version for sight-fishing, with both being thrown on a Favorite Hex spinning rod. Because his fish were so finicky, he also cycled through shaky heads, drop-shots, tubes and more to get bites. 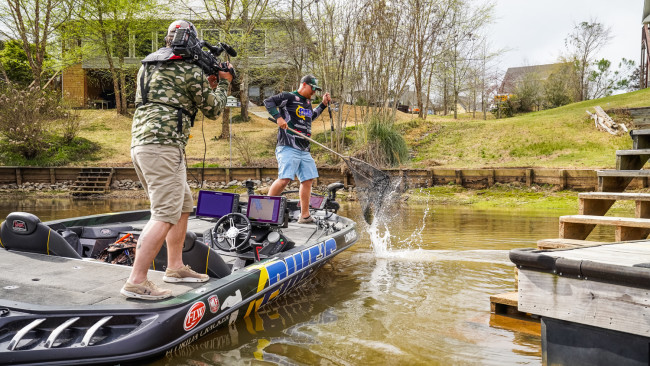 Nelson may be leading Angler of the Year, but Strickland is on quite a roll now, too.

Having just won the previous Pro Circuit event on the Harris Chain, Strickland kept his good mojo going thanks to sticking to his wheelhouse – burning the bank.

Originally, he capitalized on largemouth with a buzzbait, but eventually he had to shift gears.

“The largemouth don’t reload on that lake like others,” says Strickland. “So, honestly, I probably ran out of fish.” 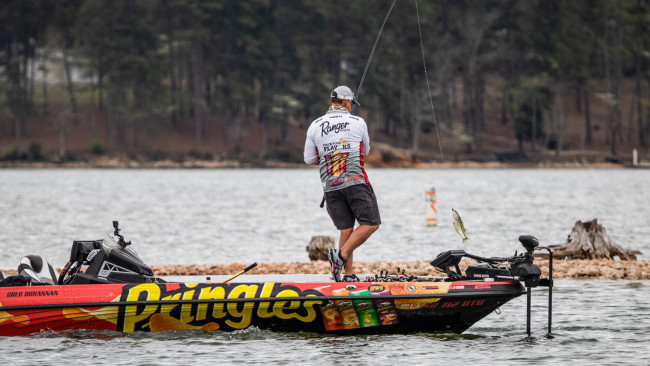 6. Bohannan does it for late father

While most anglers fished the tournament with the thought of making a check or even Covid-19, Greg Bohannan had something far closer to his heart weighing on his mind, as his dad, Kenny, passed less than two weeks before the event.

Bohannan dedicated the tournament to his late father, and he certainly did his dad proud in large part because Lake Martin reminded him of a lake he and his dad used to fish a lot.

“[Lake Martin] reminded me a lot of Beaver Lake,” says Bohannan. “So I did what I do a lot back on Beaver when I want to catch spawning spotted bass.”

However, after making the final day, Bohannan had one more tribute to his dad.

“One of my dad’s biggest pet peeves was never taking a third strike,” says Bohannan. “Always swing. So I decided to swing for it and threw a buzzbait for a while [on day four]. I didn’t get any bites, but I know my dad would’ve been proud.” 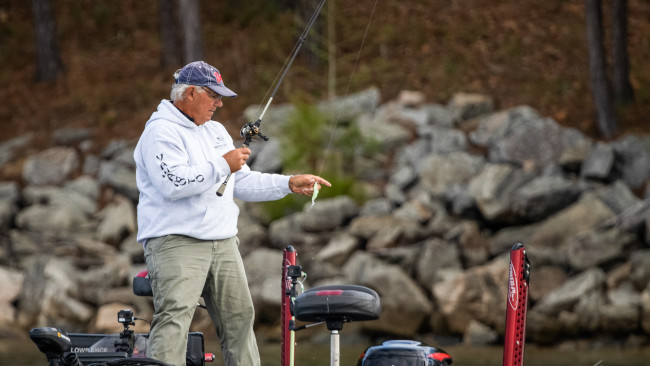 “All I have to do is find one and he’ll eat it,” says Monsoor of his trusted swim jig. “It was just hard to find any big ones.”

Hanging mainly in the clearer lower end, Monsoor says he simply covered water beating the bank. There was no real rhyme or reason to the fish he was catching, as he just “tried to put his swim jig in front of as many fish as he could.” 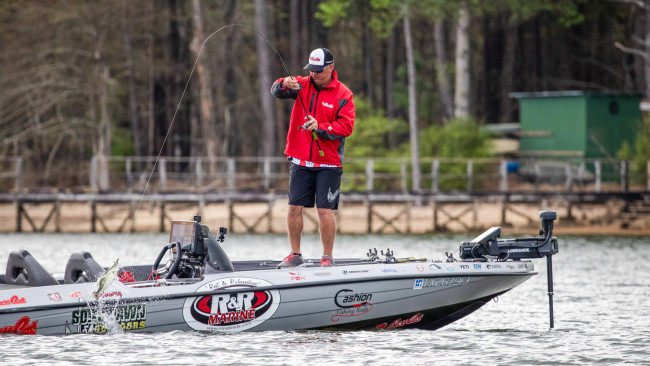 Maybe the only pro to solely weigh in spotted bass all week, Jordan Osborne did so fishing offshore shoals.

“They were areas with chunk rock and stumps in anywhere from 6 to 18 foot,” says Osborne. “I was catching a mixture of prespawn and spawning fish depending on the depth.”

To catch his fish, Osborne used a unique version of the Ned rig, which entailed cutting off two inches of a Gambler Fat Ace (green pumpkin) and putting it on a ¼-ounce Picasso Shakedown head, which he said came through the chunk rock and stumps better. He threw the combo on a 7-foot Cashion crankbait rod, Daiwa Steez reel and 12-pound test Sunline FC Sniper. Yet, the goal was to get hung up just a little.

“A lot of my bites came right when my jig would get hung up a little on a stump or rock, and I’d leave it for a little,” says Osborne. “Then, or when I’d pop it off, they’d eat it.” 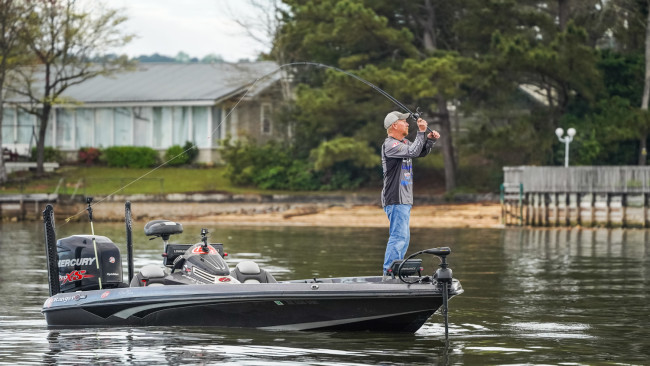 If there was one pattern that seemed to hold up best for many of the top pros, it was fishing for spawning spotted bass offshore. Kerry Milner certainly focused on it, and kept things as simple as possible.

“I used the same thing all tournament: a Carolina-rigged Zoom Ultra Vibe Speed Craw (green pumpkin),” says Milner. “If you put it in front of one, she ate it.”

The final day, Milner opted to try and swing for the win and run all new water.

“Evidently I ran the wrong direction,” says Milner of his lower final-day weight. 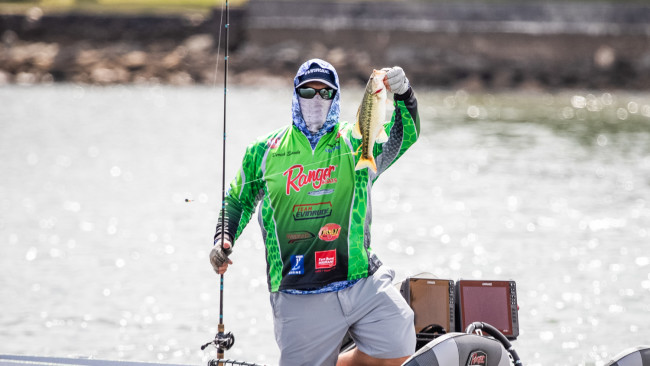 Apparently, the fishing in the Piney Flats, Tenn., area lines up well with Lake Martin, because Snavely made two pros in the top 10 from the same town (Abram being the other).

Like Abram, Snavely was on a dual-species pattern. He fished for bedding largemouth in the mornings before going after offshore spotted bass. The plan worked great initially when he found some good ones on beds, coaxing them to bite with a V&M J-Bug (green pumpkin). Eventually, though, he had to switch to throwing a Carolina rig on offshore points.

“It was stupid easy to catch them on the Carolina rig,” says Snavely, who used a V&M Swamp Hog on the C-rig and mixed in a V&M prototype swimbait. “They bite so quick.

“This whole tournament, I loved it, because you could have 20 rods on your deck and catch a fish on all of them.”