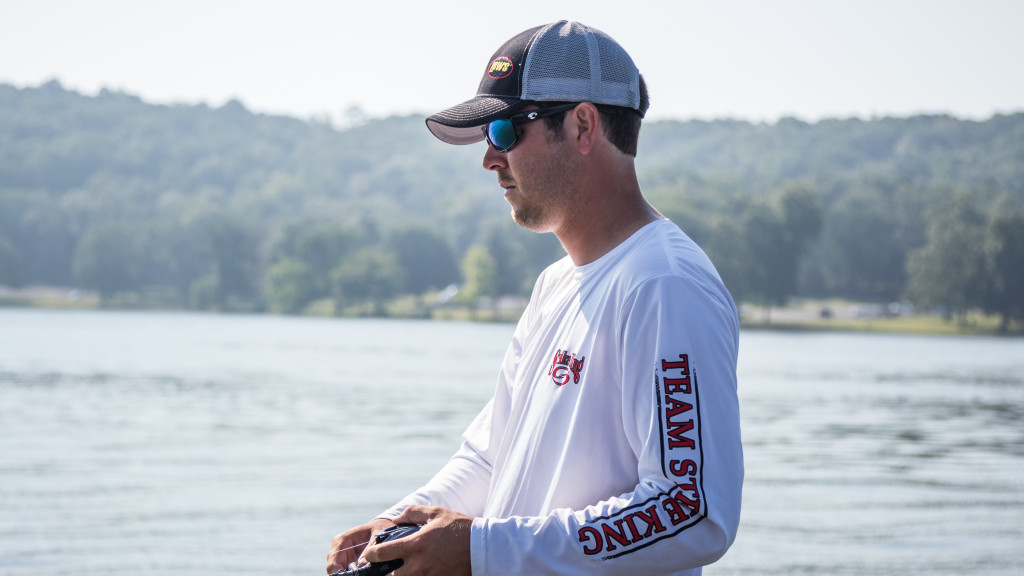 Tackle Warehouse Pro Circuit rookie Cole Floyd is a rookie by definition only. Despite living in Ohio until joining the Bethel University fishing team, it hasn’t taken long for the young phenom to make his mark on the Tennessee River, from Kentucky Lake to Guntersville, Pickwick to Chickamauga.

He won a college event on Chickamauga last August, and Floyd is familiar enough now with the Tennessee River’s many stellar bass fisheries – despite being just 23 years old – to make an even bigger mark on the Pro Circuit Super Tournament next week. After finishing 23rd at Martin back in March and jumping up to 94th in the points standings, he’s ready to put his experience to the test and turn his season around in earnest.

Floyd was gracious enough to allow me to ride along with him for the first day of practice on Chickamauga for a firsthand look at how he’s preparing to get the job done. 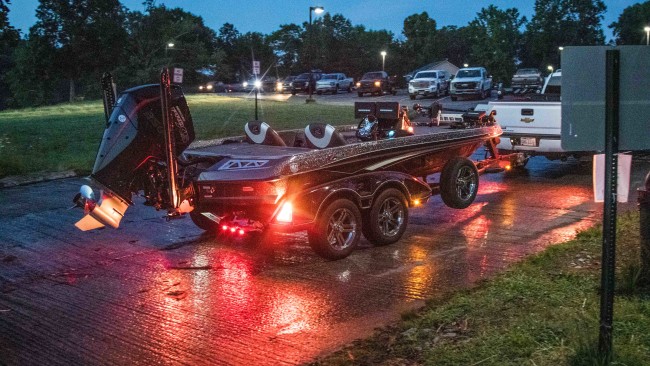 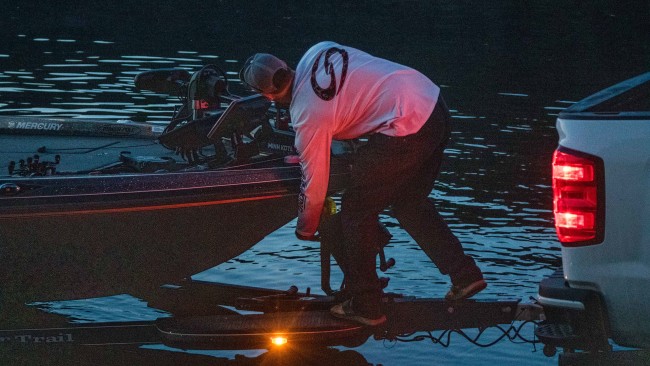 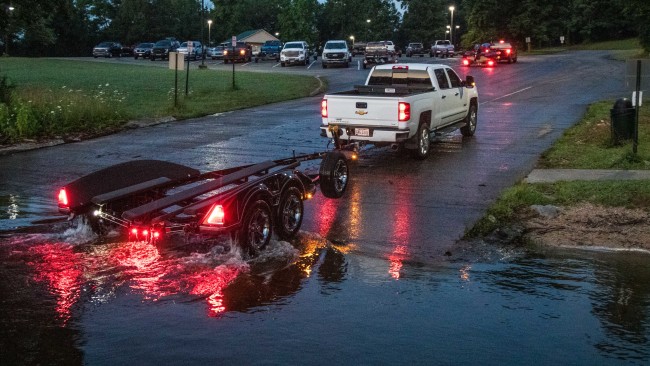 Floyd meets me at a small boat ramp in Soddy Creek at 6 a.m. sharp. There’s a handful of other competitors putting in there, but it’s not too crowded and Floyd is able to dump his Ranger in the water and set off right away. By 6:10, the truck’s parked and Floyd is ready to rock. 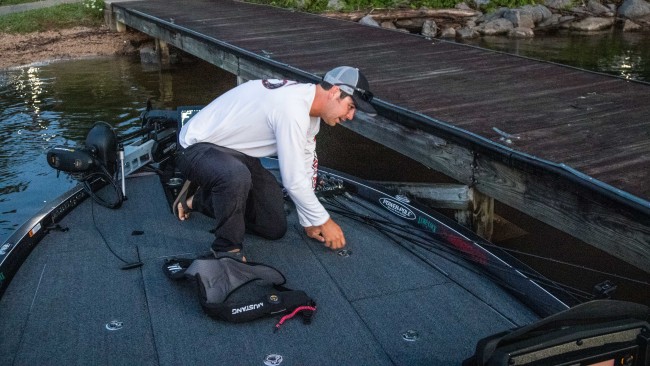 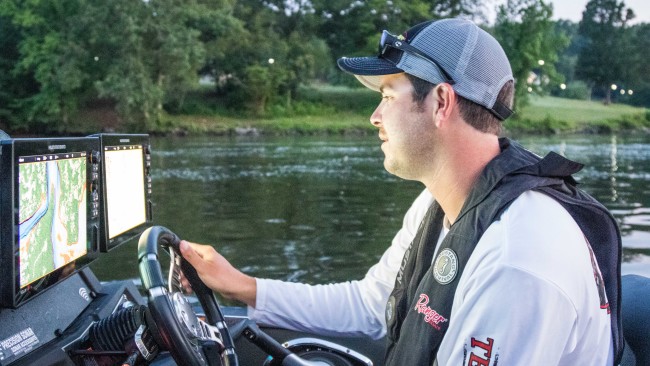 Floyd begins his day graphing some areas he’s already scouted in previous tournaments and in pre-practice, stopping on a point after about five minutes of idling. He makes a few casts with a Texas-rigged worm with no luck and decides to get moving again.

Floyd is biding his time until the fog lifts and decides to not run too far. After idling around a little more, he sets down on what he describes as “a bar with a hole in it.”

“I scanned this in pre-practice, but I didn’t fish it,” he says. “It looks like it has giants on it.”

Despite having every intention of throwing some topwaters to start the day, the fog is keeping Floyd pretty well in place, so he fires around a Strike King Thunder Cricket with a Strike King Rage Swimmer trailer for a bit, missing a pretty decent bite in the process.

“I always start out saying I’m going to do something and then I end up doing something else,” he says.

That’s what makes Floyd so talented, though. It’s easy to look at his age and assume Floyd doesn’t have the experience to contend just yet, but he trusts his instincts – and has three FLW wins and 20 top-10s to show for it. 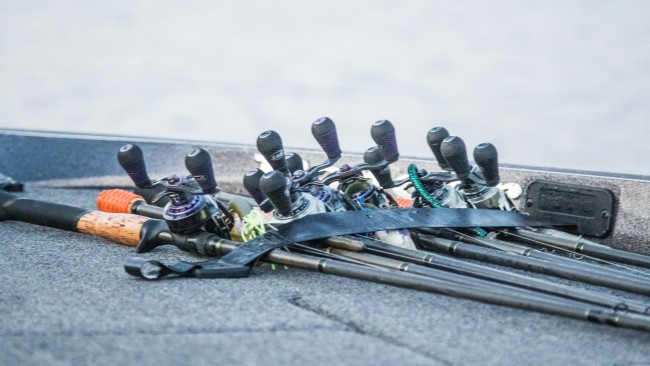 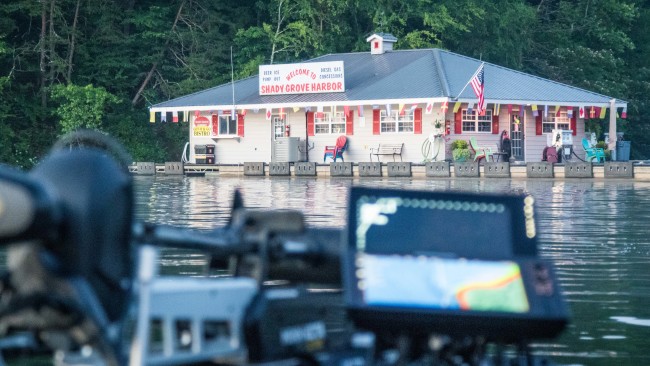 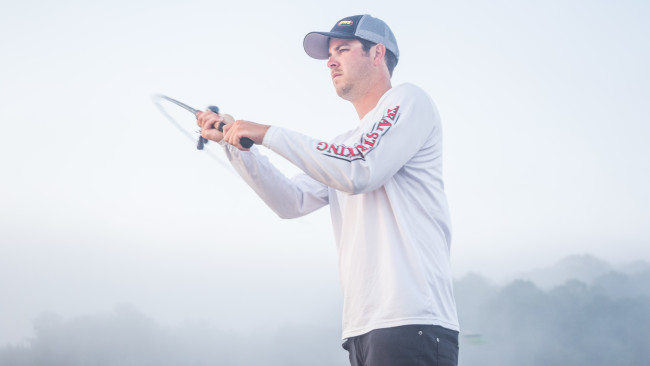 At 6:45, Floyd decides to start idling again and passes over a big school of fish on his graph. He assumes they’re all pretty small, but chooses to stop and find out anyway. He opts for his Texas rig and a crankbait to try to entice one of them to bite, though luck isn’t on his side yet this morning.

He also posits that he could most definitely get them to bite given a little time to fire up the school, but it’s practice, and he’s not interested in picking off a couple dinks to confirm his suspicions.

An hour in and Floyd still hasn’t found what he’s looking for, but he does stop on a large grass flat in 5 to 10 feet of water that looks pretty good on his graph. He sets down and picks up a walking bait, then a Thunder Cricket after a couple casts.

Conversation turns to Floyd’s history with Chickamauga – as well as the other Tennessee River impoundments he’s done so well on – and the Super Tournament format for the final three regular-season Pro Circuit events.

“I found some pretty good stuff last time I was here, but I don’t want to get my hopes up,” he says. “So much has probably changed. And I’ve never caught a true giant here.”

So many in the tournament field have caught giants, though, and the young rookie will be fishing against them starting Tuesday. He’s not too worried about it, though. 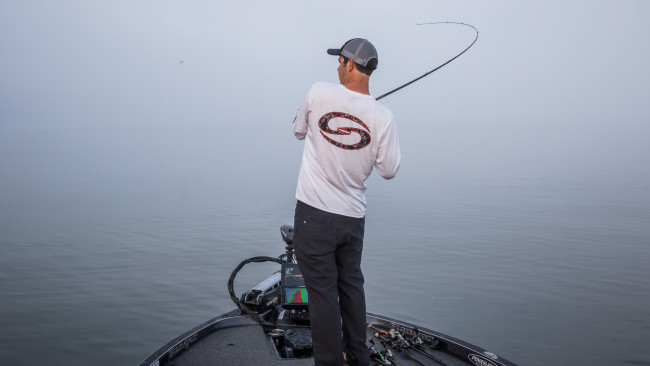 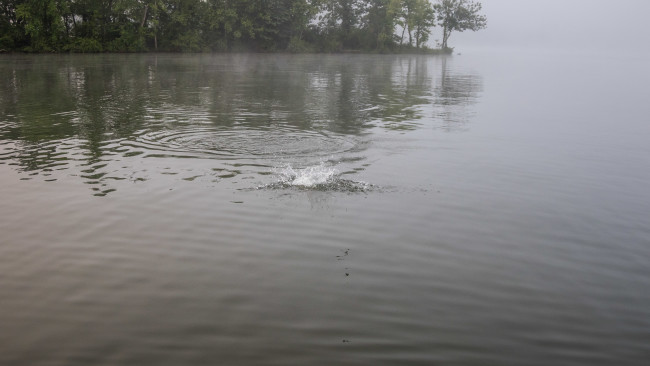 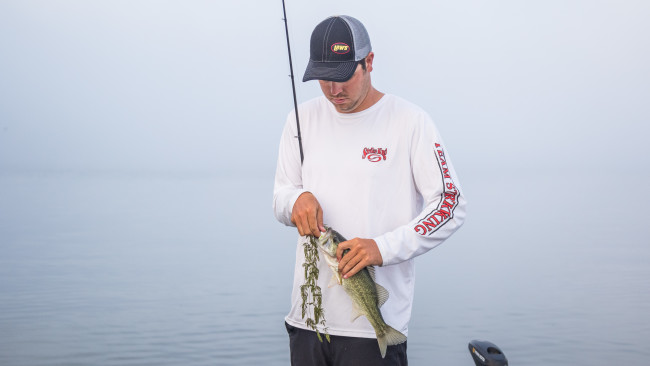 Just a couple minutes later, Floyd finally hooks up with his first fish of the day, and it’s not a bad one.

After releasing it, he’s greeted on his next cast by a second consecutive bite and attempts to shake this one off with another angler idling by. He’s not quite ready to give up any information to the competition just yet. Unfortunately, the fish just doesn’t want to give up his offering. 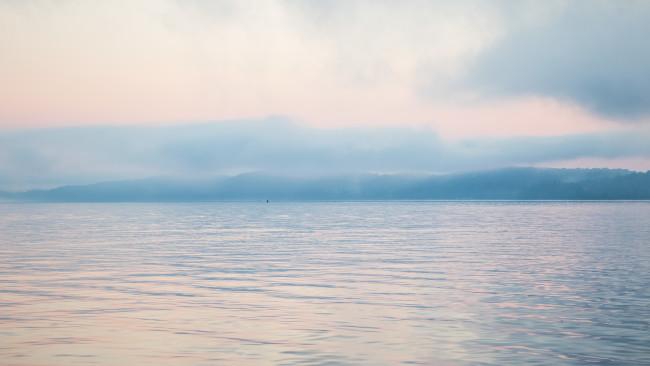 The fog looks like it’s starting to lift a little, but further south – where Floyd is hoping to go – is still blanketed. He picks up his trolling motor and makes just a brief sprint to a new location to check on some docks he thinks could be holding some fish.

On the way to the docks, Floyd discusses some possibilities for the field as a whole, including his thoughts on how the top 10 may end up shaking out given the large field size and the fact that Chick can really fish small when everyone’s trying to catch ledge fish.

“I bet there’ll be at least a couple guys (in the top 10) going shallow,” he posits. “Your percentage of finding something that hasn’t been touched if you can scan it, it’s probably about a five percent chance.”

Floyd also believes it’s going to take fishing in Chick to make the top 10, as opposed to running up to Watts Bar to find something a little more secluded.

“Chick is one of the best lakes in the country,” he adds. “To leave it and go over there just seems crazy.” 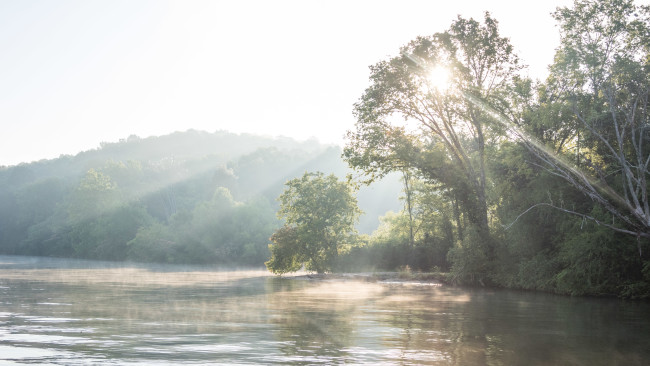 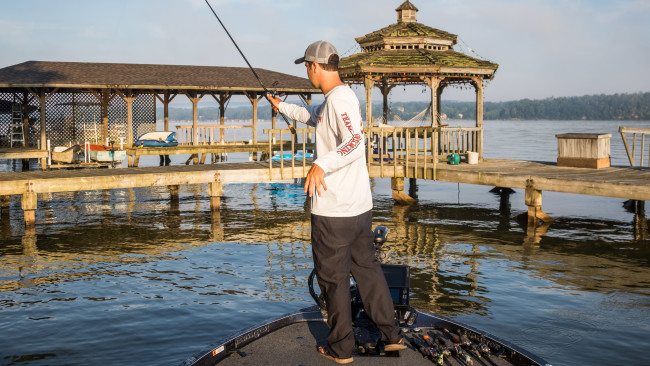 Floyd starts flipping an isolated dock, picking it apart fairly meticulously before moving on to the adjacent sea wall. After a few reps swimming a jig, he finally gets bit and manages to shake off the fish before it gets to the boat.

He proceeds up the shoreline to another series of docks, flipping each one at a pretty good pace.

“This is how I like to fish,” he says. “But at the same time, what the hell am I doing? Flipping docks on Chickamauga?”

With the fog starting to lift, it’s easier to see competitors running by. Around 7:45, Angler of the Year leader Ron Nelson zips by and sets down not far from Floyd’s docks.

“That guy’s good, man,” he quips. “Anywhere he goes, he catches them.”

Floyd isn’t wrong, but he’s also not in the business of doing what everyone else is doing and fishing near his competitors, even if they are first in points. Instead, he decides to do a little more idling and then makes a run further south now that the fog has nearly lifted. 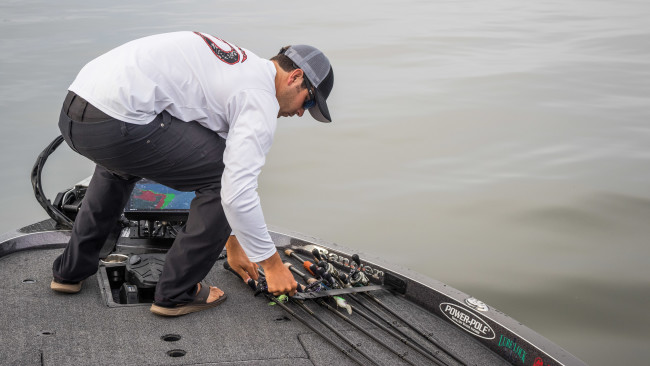 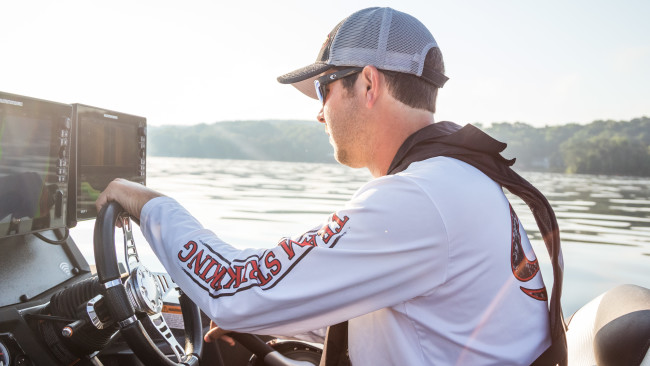 Most people expect next week’s derby to be a ledge slugfest, and most of Chickamauga’s best ledges are at the lower end of the lake, starting right around the Sequoyah nuclear plant. To this point, Floyd hasn’t seen a ton of boats on ledges, but that changes as he passes the plant.

“This is about right,” he jokes. “About what I expected.”

Floyd stops on a flat with some docks on it near the main channel, which also has some grass and a hump with a bare spot where he’s caught fish in the past. He walks his topwater over the spot and immediately hooks up with a decent fish.

Not long after, he switches to a jig and shakes off a fish he thinks is pretty big until he sees it following his lure to the boat.

“I’d like to catch one over 7 pounds this week,” Floyd muses. “I never catch any big ones here.”

That’s probably an inaccurate statement if Floyd is talking about 90 percent of the lakes in the country, but at Chick – the land of giants – it’s hard to get too excited about 5- and 6-pounders when double-digit bass are swimming around nearly everywhere.

Floyd decides it’s time to keep moving and makes another run down to Chester Frost Park where he stops on a big grass flat at which he and his Bethel partner, Carter McNeil, caught several quality fish en route to the Bassmaster College Series National Championship last August.

“I caught one over 6 (pounds) here last year,” he says of the grass flat. “First fish of the final day.” 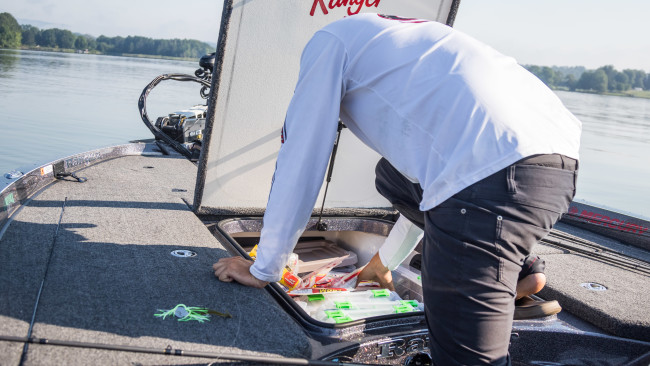 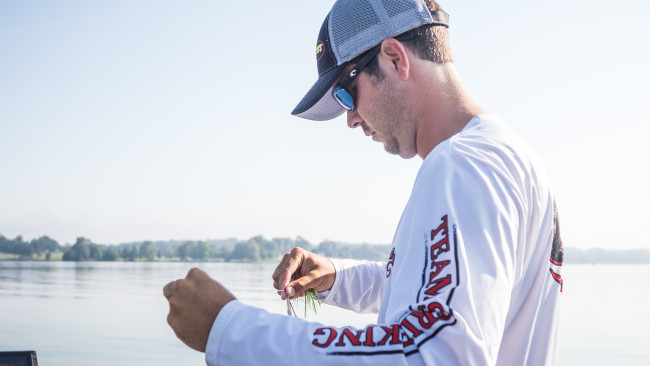 After a few casts with a walking bait, Floyd opens up his tackle storage locker and ties on a spinnerbait – an odd selection, he admits, but it’s worked for him in the past.

“You wouldn’t think these are spinnerbait conditions,” he says. “I just stay on the edge of the grass line with it.”

The grass flat is full of milfoil and coontail – not exactly the most appealing vegetation for what Floyd is looking to do, but he knows it’s held good fish in the past. After a couple casts, he catches a good one – a good crappie, anyway. 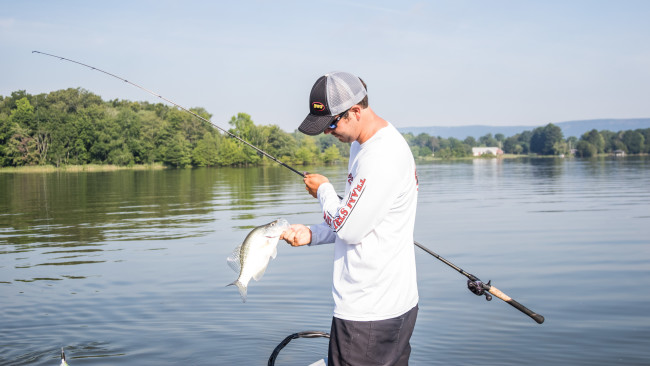 “The odds of them being here now are slim,” he says. “But I’m definitely going to give it a try.”

Floyd says he’s looking for “something weird” in practice; something no one else is going to think to try. He has a feeling he can maybe catch 14 to 17 pounds flipping grass if he can find the right areas.

Floyd switches to a jig and starts flipping for a bite, finally getting one at 9:25. 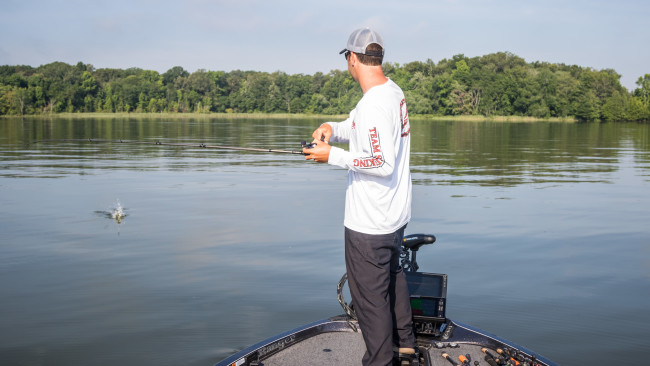 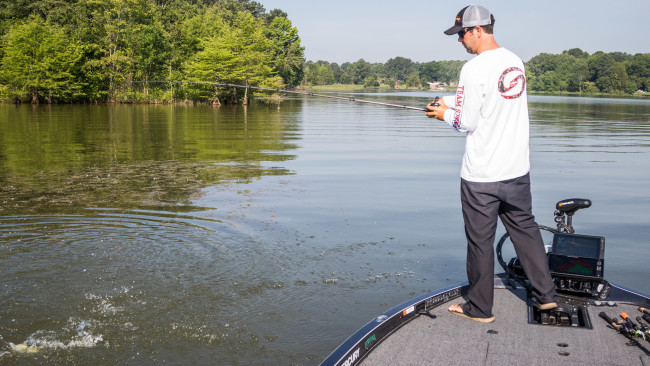 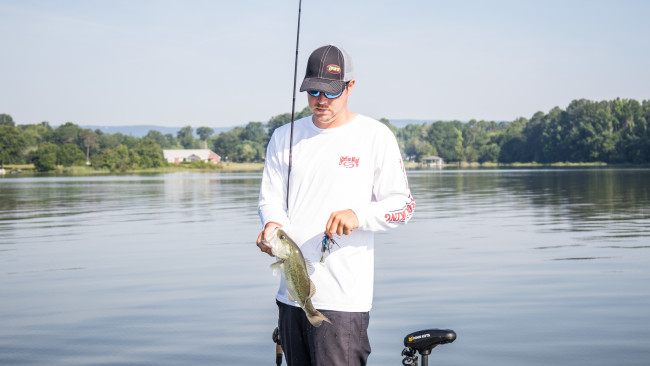 “If you told me I could catch them flipping, I wouldn’t even practice,” he jokes. “I love flipping.”

At 10:05, the sun is getting high in the sky and it’s time to bust out the shorts. In the process, he sees some gizzard shad darting through the grass around the boat.

Ten minutes later – after tying on a frog to probe some of the thicker grass – Floyd hooks up with a near-keeper.

“I bet if you timed it up right you could catch a big bag in here,” he says, clearly encouraged by the frog bite.

“There’s all kinds of stuff going on in this grass,” he adds. “I just don’t know if there’s any big ones in here.”

He goes back to flipping and misses a bite 15 minutes later, which is the signal to pick up and move across the creek to another patch of grass. A few more minutes later and it’s time to head back out toward the main river.

On the way, Floyd sees Tyler Stewart and stops to say hello and discuss the first few hours of practice. 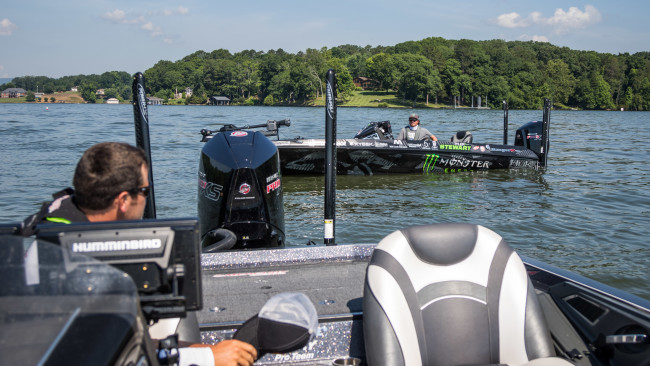 On the way back to Soddy Creek, Floyd runs past a huge laydown in 20 feet of water that he says reminds him of a tree on which he caught several 4-pounders in his Phoenix Bass Fishing League presented by T-H Marine Regional win on Guntersville last October. Sure enough, he gets bit on his first flip to one of the laydown’s many branches, but the fish gets him wrapped and spits the hook. 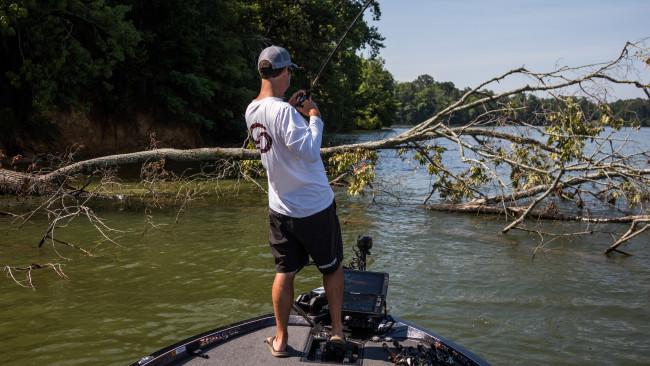 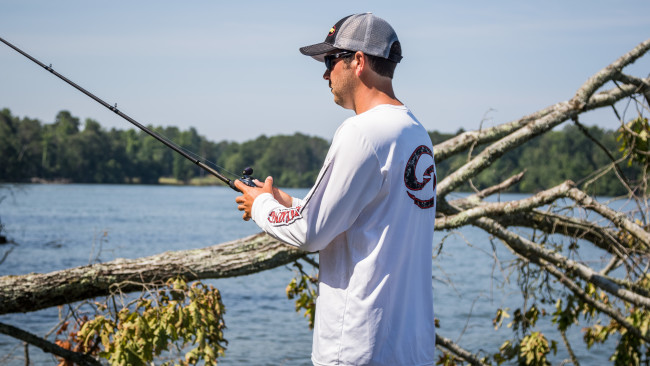 One flip later and Floyd gets another bite, but he lets this one swim off with his bait for a while before shaking it off as another Super Tournament competitor idles a nearby ledge.

“I think I could catch a limit doing this,” he says. 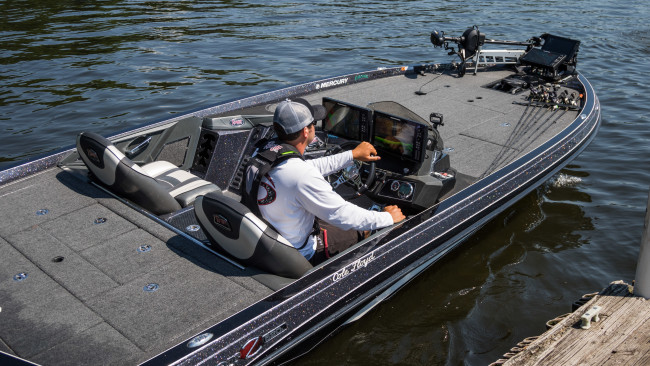 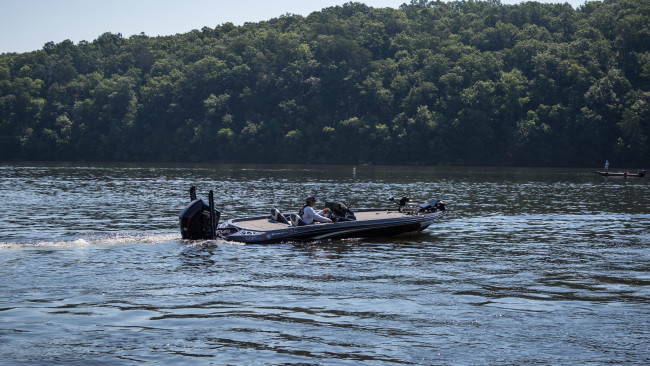 It’s after 11 o’clock and it’s time for Floyd to make his way back to Soddy Creek to drop off his reporter. The morning hasn’t quite been the stellar start he was hoping for, but he’s already starting to piece together some information about where to find some fish and how to catch them. It’s still early, though, and a lot often changes from the morning of day one of practice to takeoff on day one of the tournament. He’s got plenty of time to unlock more of Chickamauga’s secrets.