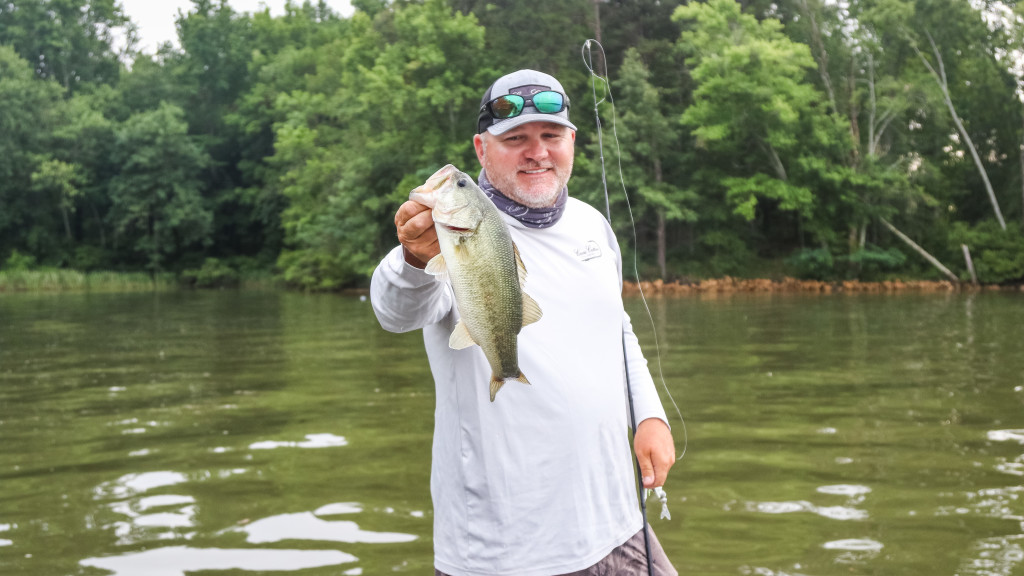 Second-year Tackle Warehouse Pro Circuit pro Jon Canada enters the first of three Super Tournaments down the stretch run of the season ranked third in Angler of the Year points. After a 10th-place finish at Sam Rayburn to start the season, he tacked on a 20th at the Harris Chain and 21st at Martin, and he’s looking to keep that consistency rolling on Chickamauga this week.

Last season was a mixed bag for the Alabama pro, who finished 50th or better three times (including 12th at Grand Lake). Unfortunately, the hits came with some misses in the form of three double-digit finishes. One of those letdowns – a 114th-place showing – came at Chickamauga last May.

Chick is a different beast this time around, and Canada isn’t prepared to have a repeat performance. Instead, he’s been putting in the work graphing offshore structure and looking for anything that might give him an edge over the competition, a large portion of which will be fishing those very same ledges in the lake’s lower end.

Day three for Canada is all about putting in more tedious work idling and staring at his electronics, and he let me ride along with him to watch him search for the missing puzzle pieces. 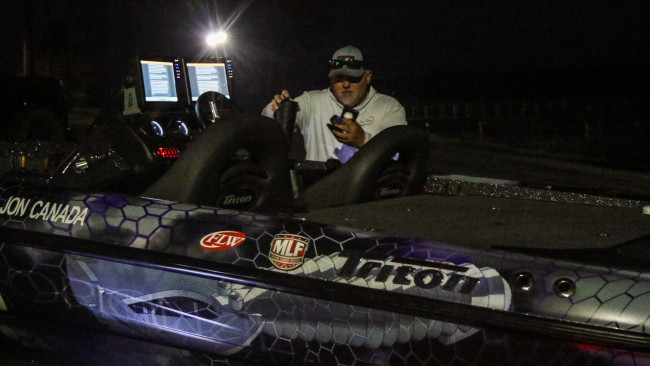 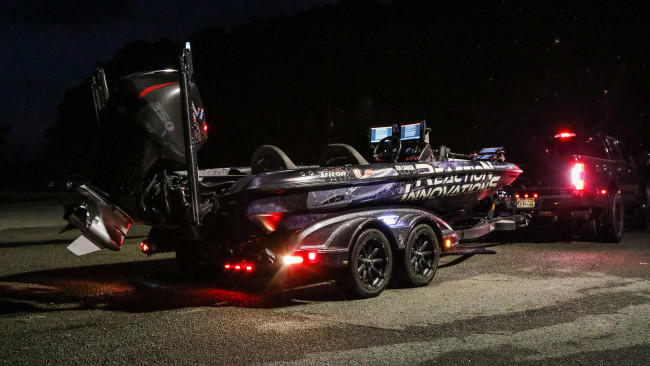 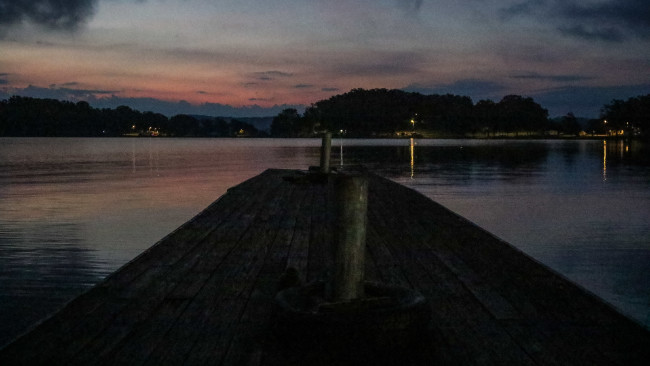 Canada and I meet at the Chester Frost boat ramp toward the lower end of Chick at 5:45 a.m. Anglers are allowed to begin practicing 30 minutes before sunrise, which gives Canada about 10 minutes to ready his boat and get in the water.

After making some cursory checks and showing off a portion of the hull at the bow that recently had some holes punched in it (the roller broke on the drive to Chick and punctured the hull in two places – holes he’s since patched up), Canada dumps his boat in the water, gets a lift from David Williams, has a quick chat with fellow second-year pro Bradford Beavers and sets out for the ledges. 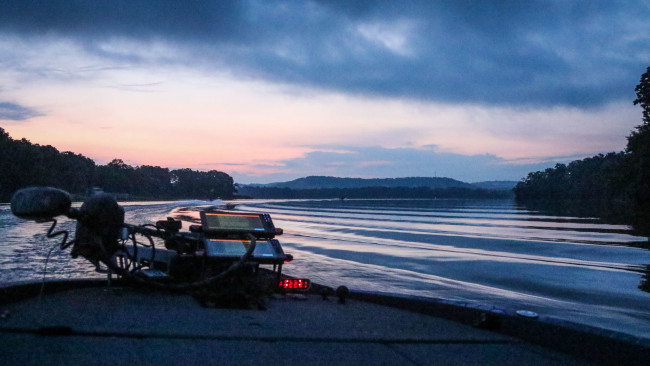 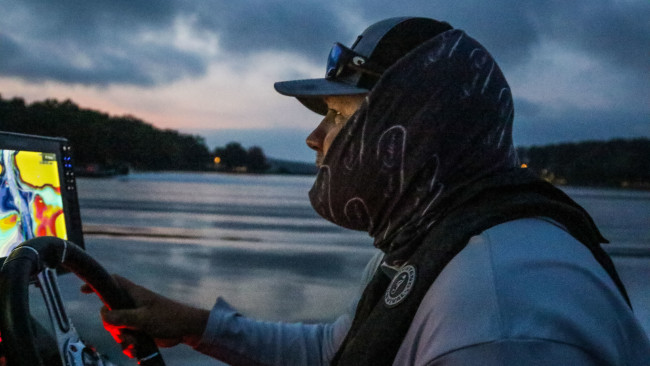 Canada isn’t worried about the tough luck he’s had in practice, mostly when it comes to equipment issues. He says he typically has his best tournaments when things have gone poorly in practice, and he’s optimistic he’s going to find something good on the final day before the start of the tournament.

With the sun just starting to illuminate the morning sky, Canada rips toward the lower end of the lake and begins idling some ledges he’s checked previously – mostly to see if anything has changed. He hasn’t really had a chance to check any of his offshore stuff this early in the morning yet.

As he’s idling, Canada talks about his original plan to maybe jump into Nickajack each day (where he’s confident he could catch a 4- or 5-pound smallmouth to anchor his bag) before finding out the lock would be closed during the tournament. He also touches on fishing current and the fact that the TVA hasn’t been pulling much the last couple days, though that might change during the week.

On his graph, Canada spots a cluster of bait he suspects are crappie.

“These big bass here eat crappie,” he says. “They like them as much as we do.”

Canada doesn’t have any rods on his deck yet. The plan, for now, anyway, is to just look around. If he finds something juicy, that could change in a hurry.

Over the past couple months, Canada has been putting in a lot of time on Guntersville, which doesn’t exactly fish the same as Chick, but both are prime Tennessee River fisheries and there are enough similarities to make Canada feel good about his preparation.

“I have confidence because I’ve been catching them at the lower end of Guntersville,” he admits. 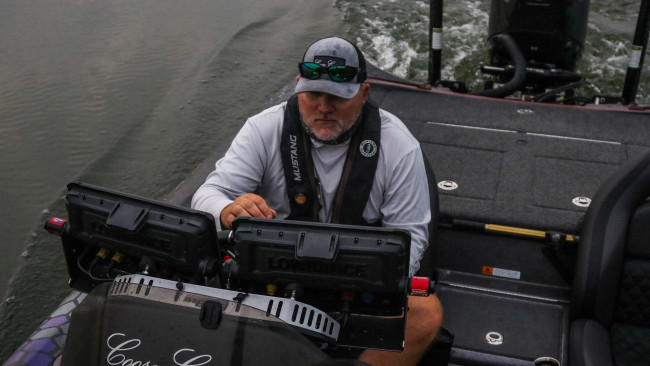 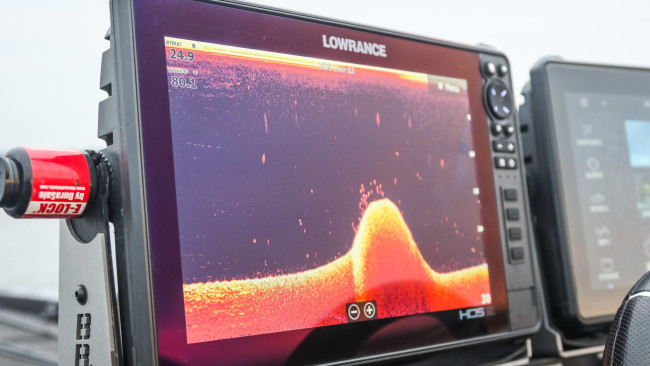 The schools Canada is looking for aren’t the mega-schools everyone on Chick knows about. Instead, he’s keeping an eye out for smaller schools and even stumps and brush he could potentially pluck one or two fish off of in the tournament.

As he continues to graph, Canada opens up about his up-and-down season in 2019 and his hot start in 2020.

“I’m just fishing my gut and trying to eliminate bad mistakes and bad decisions,” he says. “I’m just enjoying being able to do this for a living. I don’t take anything for granted.”

It wasn’t always easy for Canada to enjoy competitive fishing the way he does now, but when he took time off to care for his ailing stepfather, he returned with a renewed sense of excitement for the sport and a new understanding about why fishermen fish.

“You’ve got to have fun,” he explains. “We’re all just big kids out here. You wake up at 4:30 in the morning to chase green fish, you’ve got to be a little crazy.” 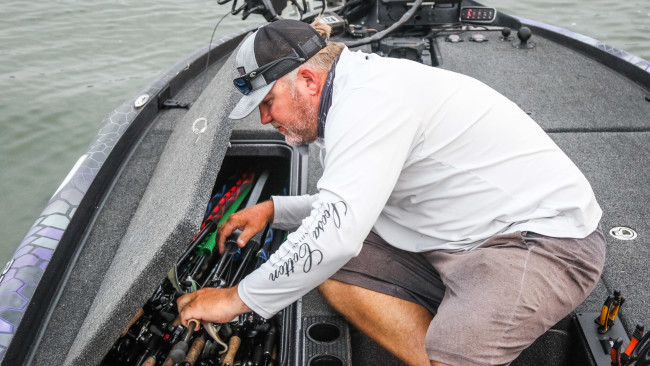 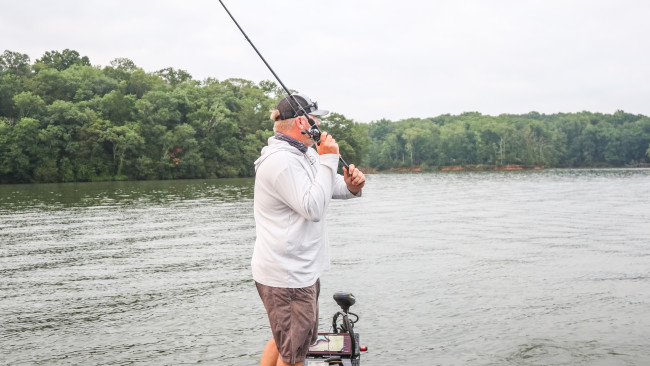 At 6:45, Canada finally stops to make his first cast, if for no other reason than to break up some of the monotony of just cruising around at a few miles per hour. He pulls a swimbait rod out of the locker and gets bit right away – a good bite, he says – but he doesn’t hook up. Ten minutes later, it’s back to idling. 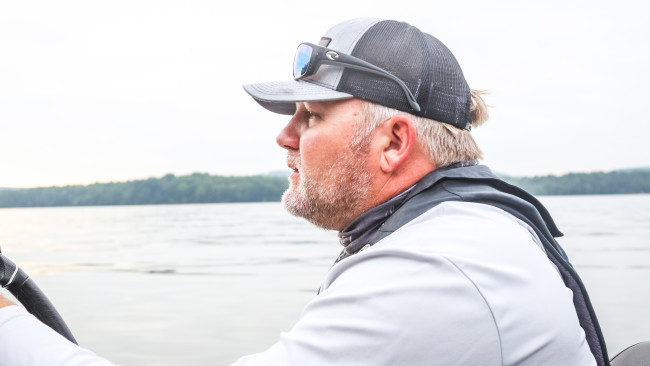 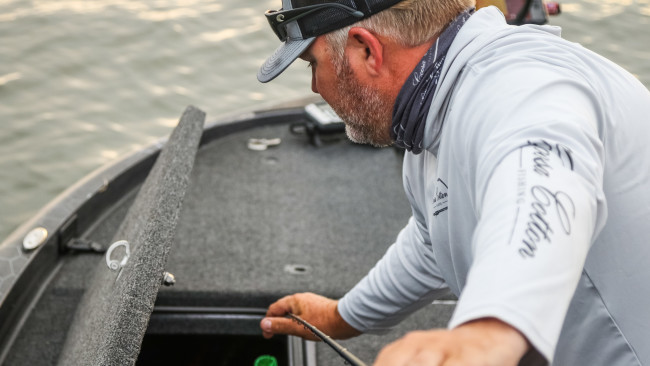 At 7:05, Canada makes another stop and pulls out another new rod, though it’s right back to the swimbait rod to ply the grass he’s seeing on his electronics. As much as he doesn’t want to, Canada says it might take a slower approach to get these fish to bite.

“These fish have been messed with so much,” he says. “You almost have to be dragging something to get them to bite. These fish are so educated.”

Going with his gut, Canada digs in the rod locker for yet another offering – this time a rod rigged with a prototype Reaction Innovations worm – and lets it rip into the grass, and it doesn’t take long for those finnicky fish to give their own review of the prototype soft plastic. 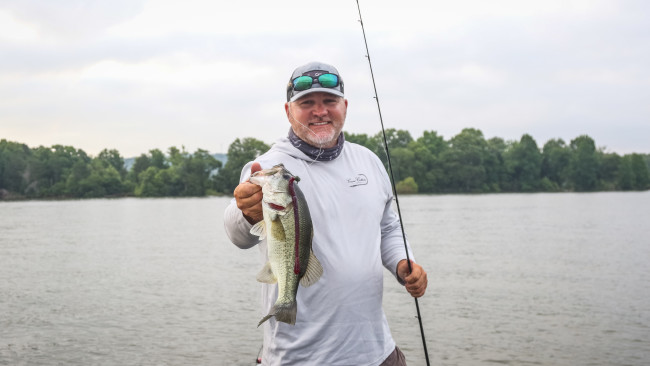 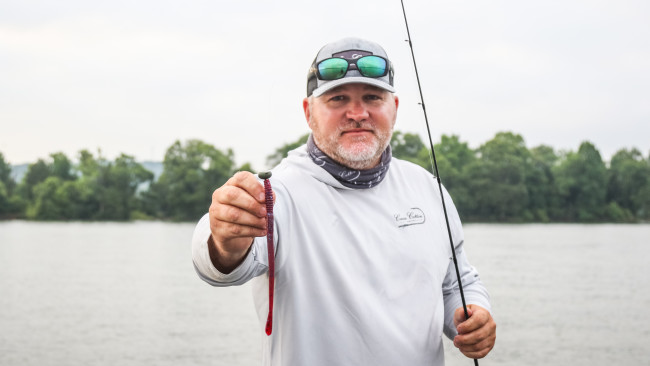 A couple casts later and Canada is ready to give up on the grass. It’s back to idling.

“You’ve got to keep checking this stuff, because eventually they’re going to be here,” he says. “This whole tournament’s going to be decisions and timing.”

At 7:35, it’s on to a small stretch of docks to flip around a Dirty Jigs flipping jig, and it only takes a few flips to hook up with a slab crappie. Two flips later, Canada trades the crappie for a small largemouth – not the size he’s looking for, but on Chick, it’s a numbers game.

“If you catch 20 bass, you’re going to catch some good ones,” he explains.

Canada gets back on the big motor to idle, though he makes an abrupt stop when he sees Pro Circuit rookie Laramy Strickland working one of Chick’s community ledges. He stops to say hello and see how Strickland’s day is going before moving on. 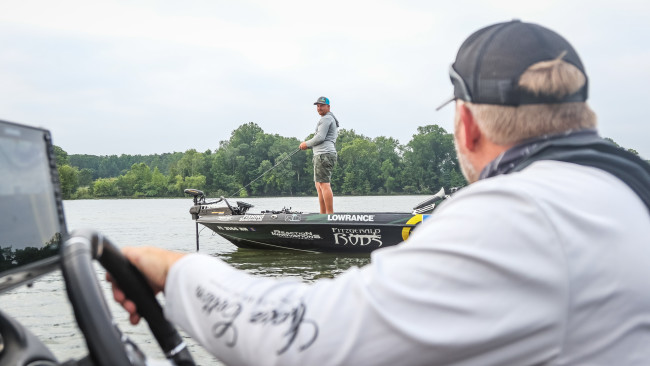 Canada loves to fish shallow, but he’s been coming around to the offshore game both out of necessity and also because he’s a big fan of offshore saltwater fishing. His phone’s camera roll is packed with photos of snapper and gag grouper and marlin. For a man who also spends a lot of time hunting, saltwater fishing might be what ultimately captures most of his free time.

At 8:30, Canada stops on a ledge that looks to have some good fish on it. He opens his rod locker again, pulls out a cranking rod and lets it rip.

Just a few casts later, he lands one, and then another. 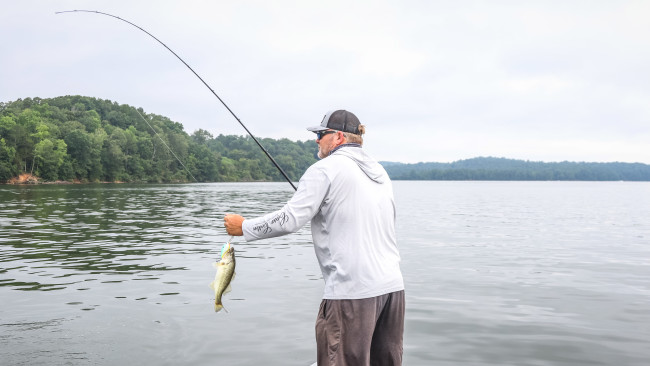 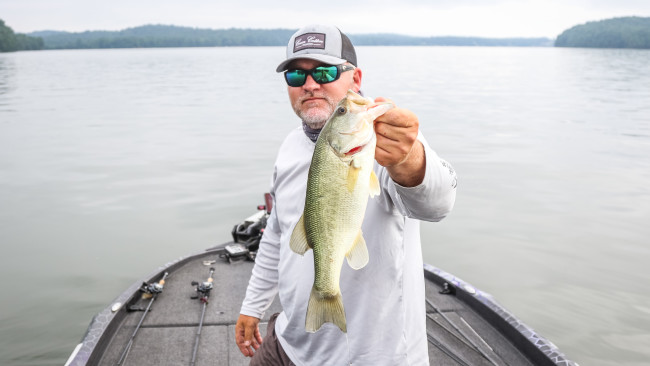 With that, it’s already time to move. Canada isn’t interested in firing up a school of fish he saw on his electronics and knows is there.

“I don’t want to find out what my best school is until tomorrow,” he says.

Idling and graphing is tedious work, so Canada decides to fire up the radio with some country music. Mercifully, the sun hasn’t really broken through the clouds yet, and it’s an increasingly pleasant morning as a result. As far as idling goes, it could be a lot worse. 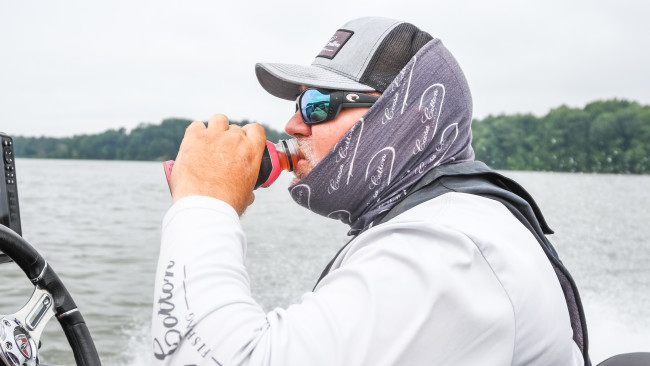 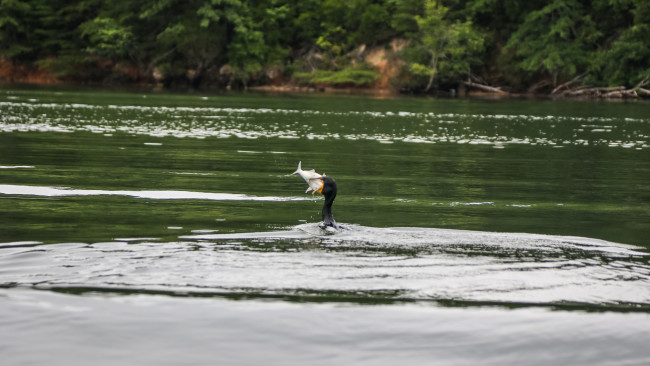 Around 9 o’clock, Canada pops into a creek and starts working his way to the back, stopping on a point to toss a crankbait at something that catches his attention. He also notices the water marks on a nearby dock, which indicate the water level may have dropped 6 or 8 inches since Sunday.

On the way out of the creek, Canada passes Dakota Ebare, who’s fishing some structure the former decided to pass up on the way in. He didn’t think too many other people knew about the spot, though he’s friends with Ebare and doesn’t mind seeing him sitting there. He stops to trade a couple jokes with the 2019 FLW Cup third-place finisher. 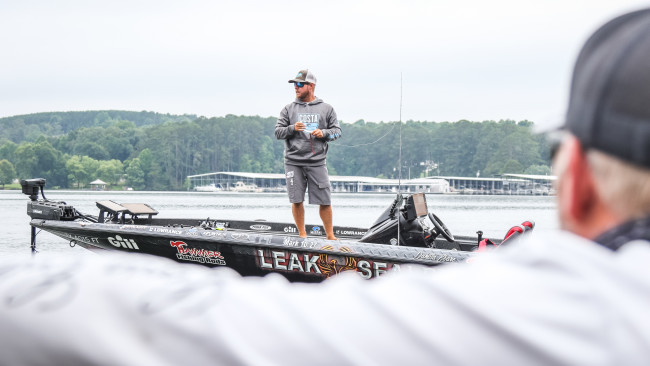 Back out on the main river, it’s clear Canada is frustrated with the amount of boats sitting on every channel swing, ledge, shell bar and hump.

“I haven’t been able to idle this all week,” he says. “With these chips and charts, everybody’s got the same stuff.

“Somebody who figures out how to catch them shallow on the Tennessee River is going to make a lot of money.”

Canada finally finds a vacated ledge he wants to fish around 10 o’clock, opting first for a crankbait and then a swimbait, then finally a drop-shot – just to see if he can coax one or two fish to show their size. He manages to get one to eat, but it’s a baby. 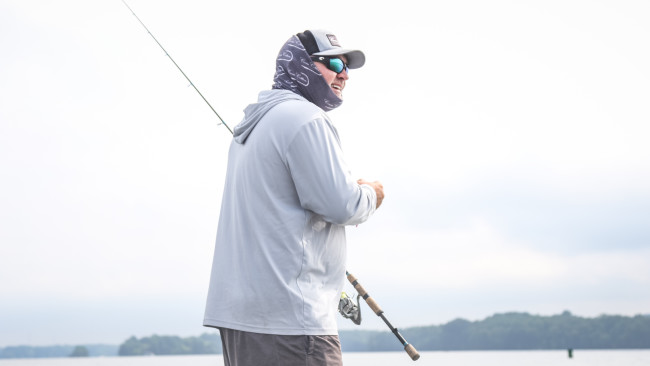 Fifteen minutes later, Canada picks up and moves to a new ledge.

“This is how you’re going to do well in this tournament,” he posits. “Just stop and fish the ledge. Don’t graph it; just fish it.”

Ebare flies by a couple casts later and yells something to Canada about the number of anglers poking and prodding ledges at the lower end.

It hasn’t taken Canada long to make a lot of friends on the Pro Circuit. Between on-the-water chats with Beavers and Ebare and Strickland and phone calls from the likes of Brad Knight (who calls Canada at 10:35 to see how his day is going), it’s clear Canada is the kind of guy his fellow competitors enjoy being around. 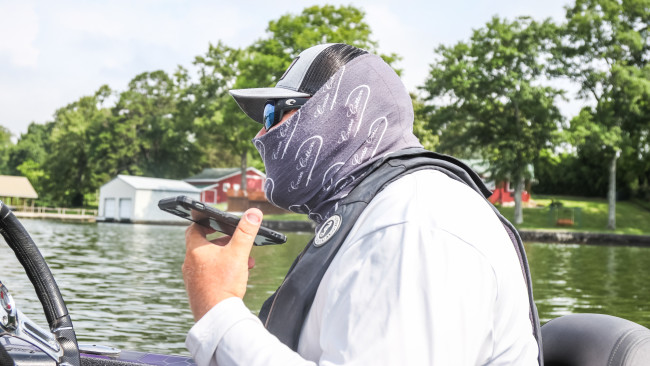 The area Canada is sitting on isn’t producing, but he spends a good amount of time tossing around a jig and a drop-shot just to make sure the school he’s on top of isn’t just a bunch of dinks. With no takers, he heads back toward Chester Frost, still on the phone with Knight.

It’s after 11 o’clock, and Canada is readying to drop me back off at the ramp, but he spends a little more time idling over some specific spots of interest to him, passing Major League Fishing Bass Pro Tour pro Dustin Connell in the process. And, of course, Canada stops to see how things are going for the fellow Alabamian. 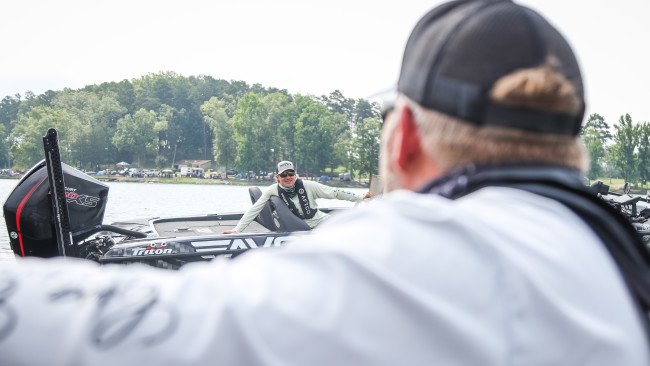 With that, it’s time for me to disembark and let Canada get back to the task at hand. He’s interested in potentially searching for some shallow stuff in the afternoon, but there’s still plenty of Chickamauga that still needs graphing, and he’s not stopping until the job’s done or his practice time is up. 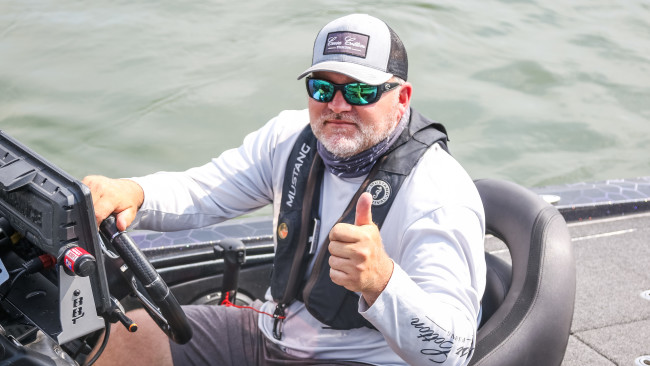 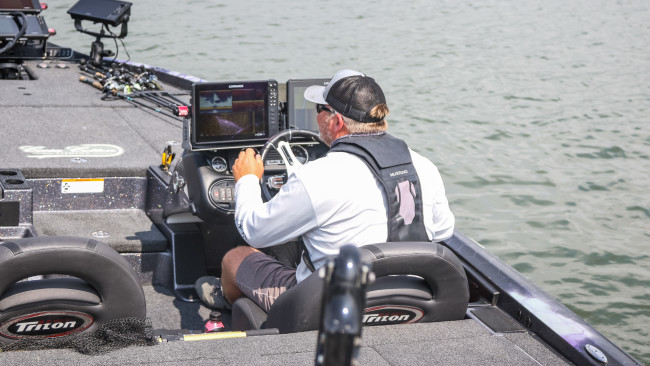 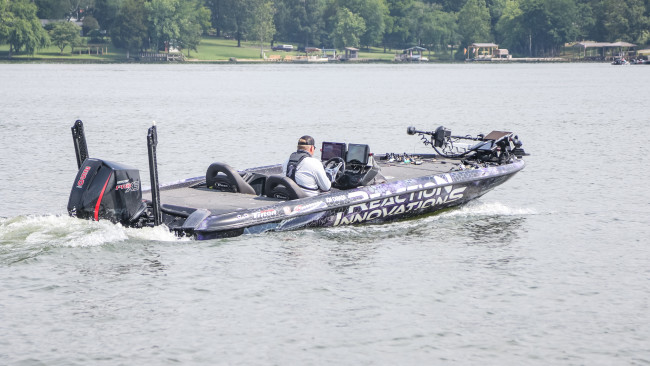 With an AOY points title to chase and a score to settle with Lake Chickamauga, Canada is as well-prepared and focused as he’s ever been. He knows this is going to be a tough tournament predicated on fishing the right stuff at the right times, and he knows he needs to avoid a major letdown like he experienced last year on Chick. Still, he’s confident in his preparation and ready to see his hard work come to fruition over the next couple or few (or more) days.