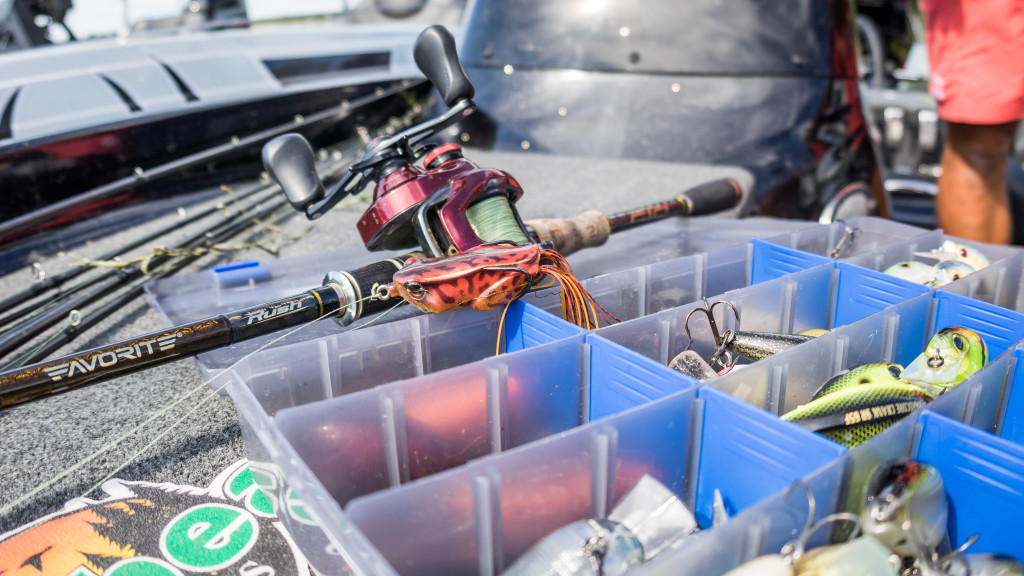 What the largemouths and smallmouths are eating on the Big Muddy
August 2, 2020 • Sean Ostruszka and Jody White • Tackle Warehouse Pro Circuit

The top pros in the Tackle Warehouse Pro Circuit Super Tournament presented by OPTIMA Batteries on the Mississippi River ended up using fairly similar tactics to attack the river, but with slight variations throughout. Tom Monsoor won with a variety of unique jigs, but many of the other top finishers used more standard fare. 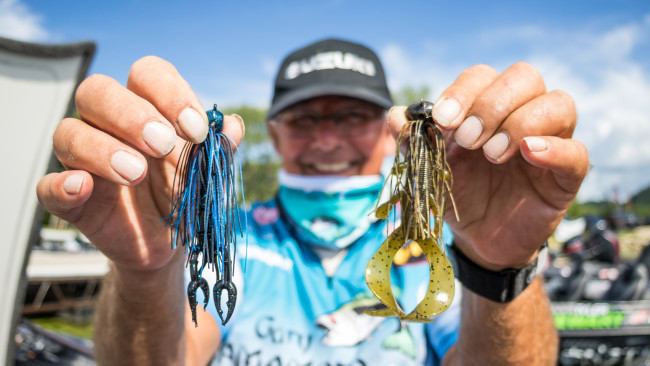 1. Tom Monsoor pioneered the swim jig technique. No surprise, a white swim jig with a 3.5-inch Yamamoto Swim Senko trailer did a significant amount of damage for him this week around gravel bars and drops in the Black River section of Pool 8. He also caught some of his bigger fish on a football jig with a Yamamoto Cowboy trailer and small homemade jig with a Yamamoto Fat Baby Craw trailer. All were thrown on Lew's rods and reels.

2. Jacob Wheeler once again proved he’s the best in the sport by nearly winning back-to-back Super Tournaments. Focusing on spots with “meandering current,” Wheeler used a frog and a swim jig. The frog was his go-to, as he had four different ones on his front deck in various colors, including an “old-school” Reaction Innovations Swamp Donkey, a SPRO Bronzeye Frog, a 13 Fishing Trash Panda and a popping frog. He threw them on a 7-foot, 6-inch heavy Duckett Jacob Wheeler Series rod, with an 8.3:1 Duckett Paradigm CRW casting reel and on 50-pound-test Sufix braid. If the fish weren’t fully committing to the frog, he switched to a black and blue swim jig with a Googan Baits Krackin’ Craw trailer. He threw that on a 7-foot, 2-inch medium-heavy Duckett Jacob Wheeler Series rod, an 8.3:1 Duckett Paradigm CRI casting reel and 30-pound-test Sufix braid. 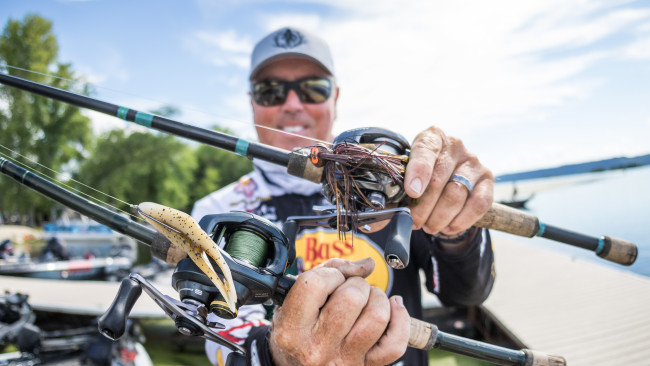 3. In a “target-rich environment” like the Mississippi River, David Walker simply looked for targets he could toss a soft-plastic toad or a Z-Man CrossEyeZ Snakehead Swim Jig with a Z-Man Turbo CrawZ trailer (green pumpkin). 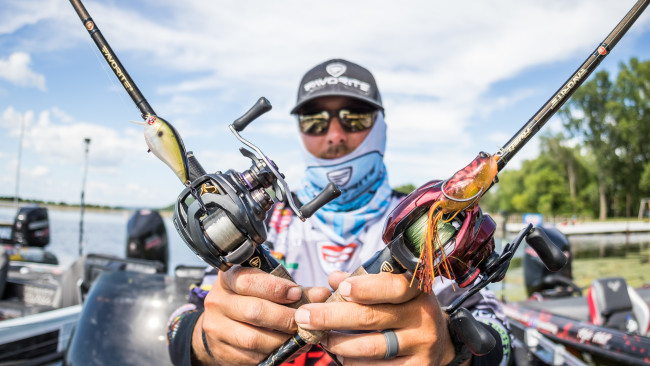 4. Zack Birge continued to excel at his “favorite place in the country” thanks to a two-pronged approach. He caught more than 80 bass from a deep spot in Pool 8 near the Pettibone Boat Club. There, his weapons of choice were a Yo-Zuri 3DB Series 1.5 squarebill (gizzard shad) and a shaky head with a 4-inch Yamamoto Senko. The crankbait he threw on a 7-foot Favorite Rush Series rod, while the shaky head was launched on a 7-foot, 3-inch Favorite Pro Series rod spooled with 15-pound-test Yo-Zuri SuperBraid and a 10-pound-test Yo-Zuri TopKnot Fluorocarbon leader. He also mixed in a secondary pattern flipping and frogging cut banks with grass and trees touching the water. He threw a small creature bait on a 7-foot, 6-inch Favorite Pro Series rod and the Jackall Kaera Frog (red frog) on a 7-foot, 3-inch Favorite Rush Series rod. Both were thrown on 30-pound-test Yo-Zuri SuperBraid. 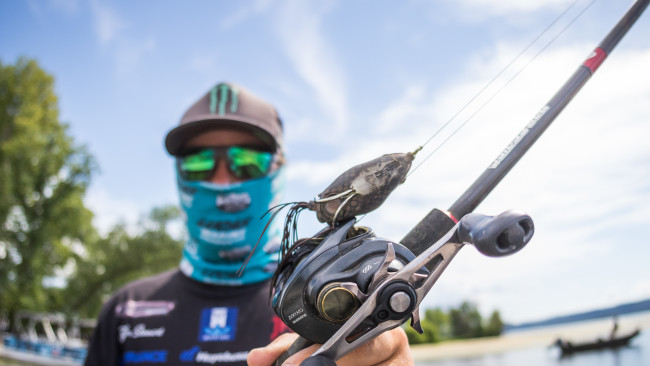 5. Hanging around Goose Island in Pool 8, Tyler Stewart looked for matted duckweed with eelgrass under it, preferably where two creeks came together to make a point. When he found it, Stewart slowed down and really picked it apart with a brown SPRO Bronzeye Frog thrown on a 7-foot, 3-inch, heavy action Favorite Pro Series rod. 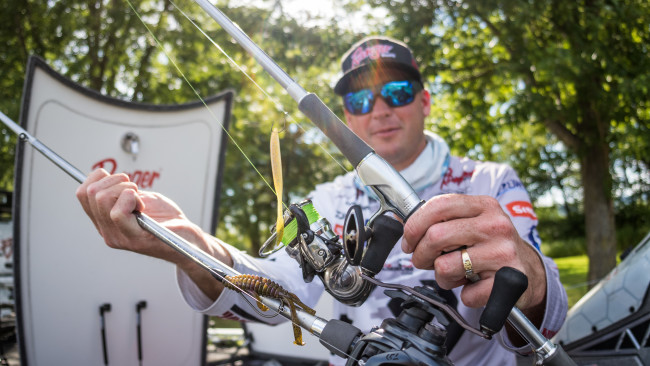 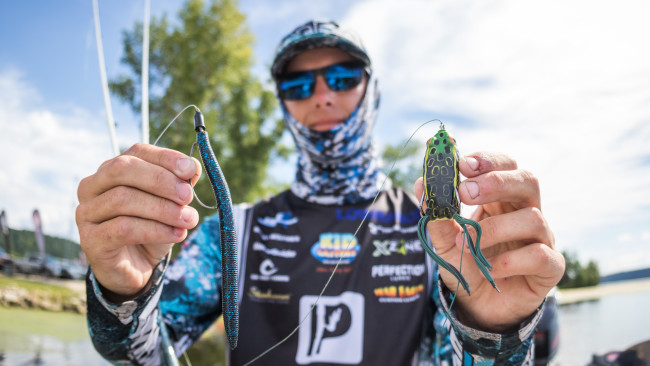 7. With so much matted vegetation, Bailey Boutries opted to focus on the smaller places other anglers may miss. There, he tossed a BOOYAH Pad Crasher (bullfrog) on a 7-foot, 2-inch medium-heavy Profishiency rod with a 7.3:1 Profishiency reel and 50-pound-test P-Line XTCB-8 braid.  He also mixed in an X Zone True Center Stick in lighter cover. 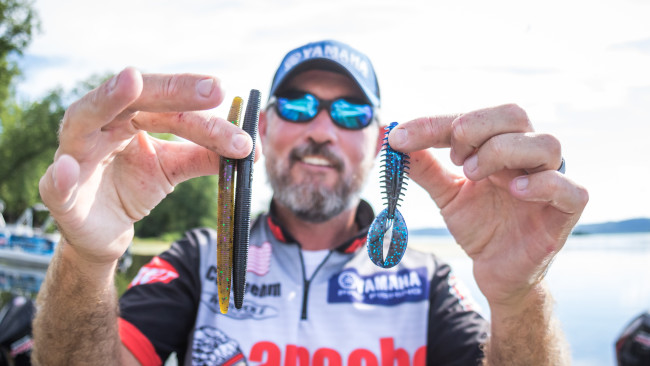 8. Clark Reehm could basically call his shot while keying on trees on sand flats with current where there would be washouts, including one “magic tree” multiple top 10 pros fished. Reehm plied his trees with a Texas-rigged Yamamoto Senko with a 1/8-ounce Elite Tungsten weight and a 3/0 hook. He’d cast it out on a 705 Dobyns Champion Extreme HP rod and 20-pound-test line and simply let the worm drift itself in the current back to the washouts. He also mixed in a wacky-rigged Yamamoto Senko (green pumpkin) with a nail weight, a Ned rig and a Zoom Z Craw Jr. (black and blue) with a 3/8-ounce weight. 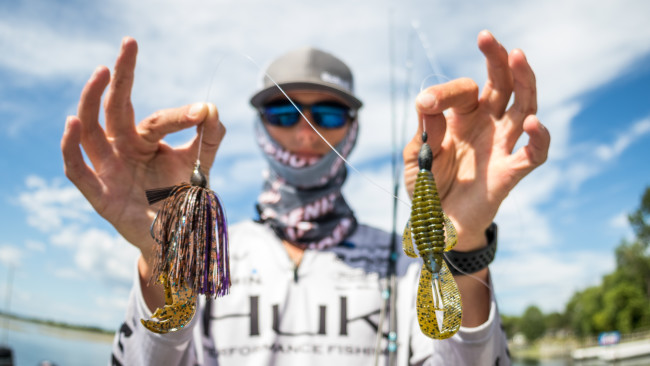 10. Scott Wiley led day one thanks to the magic tree in Pool 9, which he flipped with a Zoom Magnum UltraVibe Speed Worm (junebug red) on a ¼-ounce weight and a 5/0 hook because it was different and had a bigger profile. He threw it on a 7-foot, 6-inch Ark Invoker flipping stick, with an Abu Garcia reel and 20-pound-test Sunline fluorocarbon. Wiley looked for big bites with a SPRO Bronzeye Frog (rainforest black) thrown on a 7-foot, 4-inch Ark Invoker rod matched with an Abu Garcia reel and 60-pound test Sunline braid.