Previewing the TITLE on Sturgeon Bay

What is in store for the Tackle Warehouse Pro Circuit championship 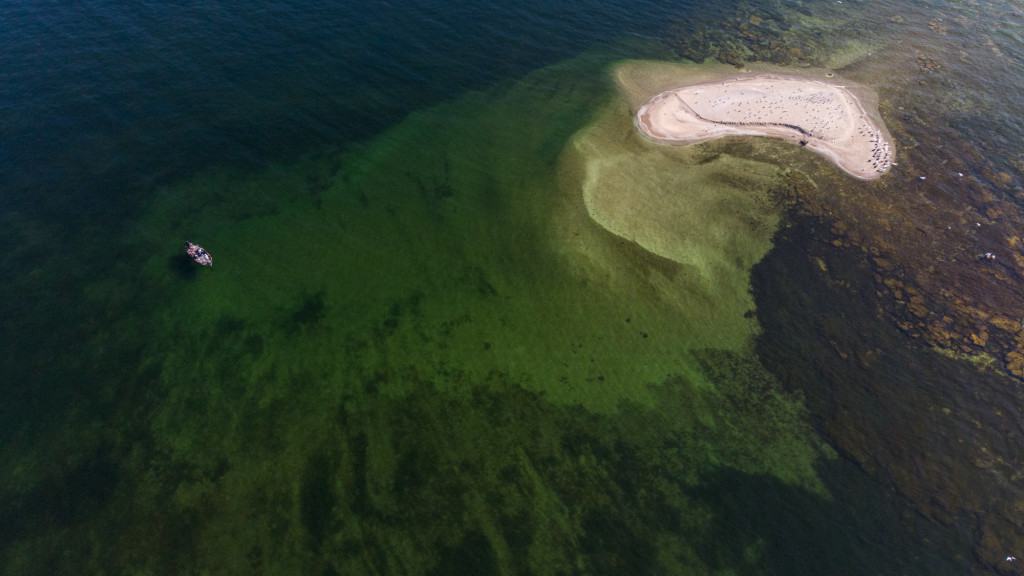 The culmination of the Tackle Warehouse Pro Circuit season, the top 50 pros in the standings are headed to the Tackle Warehouse TITLE presented by Toyota on Sturgeon Bay. Fishing with the Major League Fishing (MLF) catch, weigh and immediate release format, the winner will take home $200,000 and be the first to win the new championship event.

The event takes place August 24-29, starting with four days of Qualifying Rounds with Group A fishing on days one and three and Group B fishing on days two and four. Then, the top 10 pros from each group will move on to the Knockout Round on day five where the weights are zeroed from previous rounds and the top 10 from that round will move on to the Championship Round. In the Championship Round – the sixth and final day of competition – the weights are zeroed and the highest total weight at the end of the day is crowned TITLE champion.

Overall, the event should feature some beautiful scenery and a smorgasbord of smallmouths. 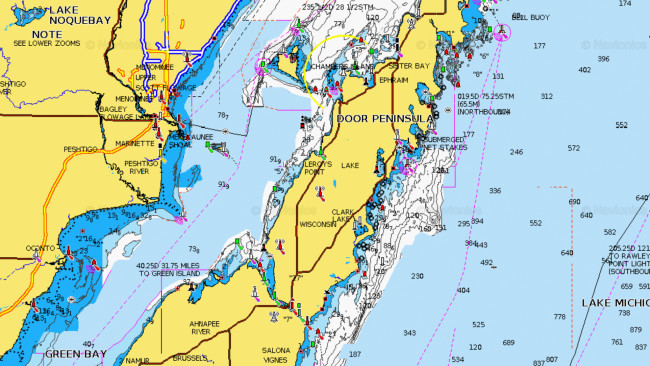 Pros will be able to launch about anywhere they want to, with takeoff technically being at Sawyer Park Boat Ramp in Sturgeon Bay, Wis. Situated on the northwest side of Lake Michigan, Sturgeon Bay is a medium-sized bay on the Door Peninsula that separates Green Bay from the rest of the lake. Green Bay itself has the city of Green Bay at the southern end and runs roughly north to south, with the peninsula separating it from the main body of Lake Michigan. Though pros can fish on both sides of the peninsula, they can’t go all the way to the north end of it, with the cutoff being somewhat south of Washington Island, which is at the tip.

Considering the field is just 50 pros, with a maximum of 25 fishing on any given day, there’s basically an infinite amount of water to hunt smallmouths in. You can find water depths over 800 feet in the main part of Lake Michigan, but there is tons of water less than 40 feet deep along the peninsula and the fairly accessible west shore of Green Bay.

“With the boundaries that they’ve given us, there’s so much water, and it could be won in so many different places,” says Matt Stefan, who is one of a few pros with extensive experience on the fishery. “For most local events, they draw a line down the center of Green Bay, from near Washington Island down to Green Bay itself, and you can fish the Door County side, and that’s it. You can’t go to the Lake Michigan side or the west side of the bay. You’re talking about hundreds of miles of fishable water with populations of fish that can win this everywhere. The lower end of Green Bay, I don’t think it will play, but you’ve got the whole bay and the Lake Michigan side that all have populations of fish that come into play.”

There are only two days of practice for the TITLE, which might make some of the more off-the-wall options impractical.

“My issue is I don’t know what I want to fish in two days of practice,” says Stefan. “You can’t even come close to looking at all the water. There’s a big part of me that really wants to go check out some of the stuff on the west side of Green Bay, the mainland side. That in itself is easily a day’s worth of checking out, but if you get over there and you’re not interested after two hours of fishing, it’s 17 miles across the bay or a 2 ½ hour drive (trailering by truck) to get over to Sturgeon Bay again.

“Knowing how good it can be all over the place, I kinda feel like the best approach for an angler is to pick a general area and fish it for two days of practice and live and die by it. I know guys are going to come and try to plan for the wind, and fish one day on the Green Bay side and one day on the Lake Michigan side, but I would rather have schools of fish found and have to relocate them and fish in 5- or 6-foot waves than drive to a different side where I didn’t have any fish found just to fish in calmer water.” 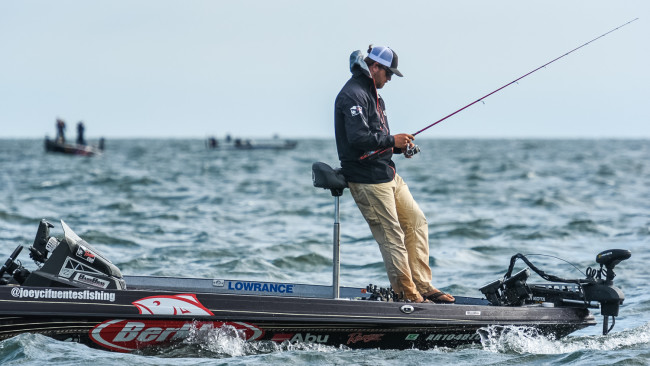 In the recent MLF Bass Pro Tour event on Sturgeon Bay, fishing offshore with a heavy reliance on drop-shot rigs and electronics was the main player. That typical style of summertime smallmouth fishing figures to be a strong contender again. Still, there are some changes that have taken place since then and there could be other patterns.

“Generally, at Sturgeon Bay there’s a migration of fish as the year progresses up north, meaning the fishing generally gets better up north,” says Stefan. “So, I think that’s going to come into play a little, but it doesn’t necessarily mean the fish are going to be deep or shallow, I think they’ll be on everything. You’re going to have guys able to catch fish in 4- to 6-feet of water and guys catching fish out in 30 feet.”

It’s pretty well proven that shallow and deep patterns can play in five-fish smallmouth tournaments on the Great Lakes, but when pros are looking to catch as many quality fish as possible, it might make a lot more sense to target fish a bit deeper.

“I think shallow will be a major player,” says Stefan. “In general, if you can find a group of shallow fish, they’re up there to feed. There will be shallow fish to be caught, but I tend to feel like the shallow fish are not grouped up as tightly, so you might be fishing for better quality, but they’re more rogue fish. The fish that are out deeper are just grouped up more sometimes.”

For those deeper fish, there’s basically only one bait these days.

“I think the Berkley PowerBait MaxScent Flat Worm will be a major player, in general, similar baits to what the MLF guys were throwing will work,” says Stefan. “Drop-shots, tubes, bottom baits in general. Those baits generate more bites, and because it’s a total weight format you need that. In practice I think guys will be catching them on jerkbaits and search baits, but come tournament time, if you want to win this event, I think you’ll be switching over to a Flat Worm. You generate bigger bites with some of those other baits, but I don’t think you’ll be able to catch enough fish to keep up with the leaders.” 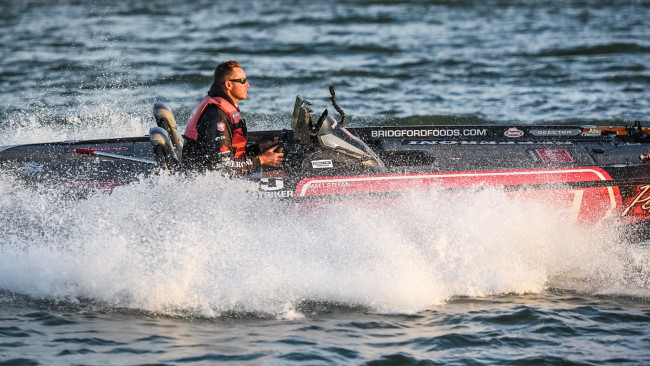 For the pros in the event, the biggest challenge will be each other, as the field is the cream of the crop of the Pro Circuit. A secondary and easily identifiable challenge will be the new format, with no nets, SCORETRACKER, penalties around fish landing and the fact that quantity matters a lot more.

However, the fishing will also offer some challenges, both in practice and during the event.

“I’m not going to say this tournament will be won in practice, but it’ll be won in practice,” says Stefan. “There will be guys that find the winning schools of fish and they’ll go out there and catch them. I don’t think there will be guys that don’t find them in practice and just wing it and stumble on a giant school. You can do that, but you’re going to be so far behind by the time you find that school you can’t make up enough ground.”

The other big key will be re-finding fish from practice and previous tournament days. Smallmouths are notoriously nomadic critters anywhere, and they’re especially prone to roam on Lake Michigan.

“It’s really going to come down to who can find and stay on top of their fish,” says Stefan. “More so than the other Great Lakes we fish, on Green Bay it’s all about water temperature. Based on wind flows, you get major currents that push the water around in different directions. You can have a wind shift, and fish you found in practice will be gone, like, there won’t be a fish within a mile of where you found them, so you have to relocate those fish. If you can stay on top of that, you’ll be able to stay on top of your fish.” 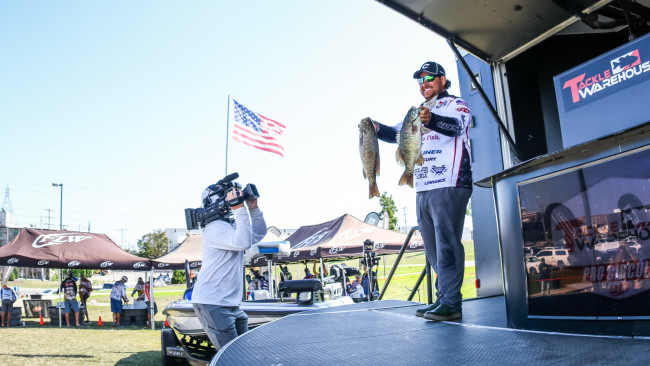 At the top of the list of pros to watch is Ron Nelson. The newly crowned Angler of the Year, Nelson lives on the shores of Lake Michigan and has prior experience on Sturgeon Bay. He’s also one of the best smallmouth anglers in the field and a master at adapting to bass. Other smallmouth experts include Stefan himself, Scott Dobson, Grae Buck and Matt Becker. Finishing second in AOY, Spencer Shuffield is also someone to keep an eye on – forward-looking sonar has been a huge player for smallmouths since its inception, and though many in the field have it, few are better with it than Shuffield. Finally, you never want to count out John Cox – the most decorated angler in the field is growing more versatile by the minute, and he’s always a threat when big money is on the line.