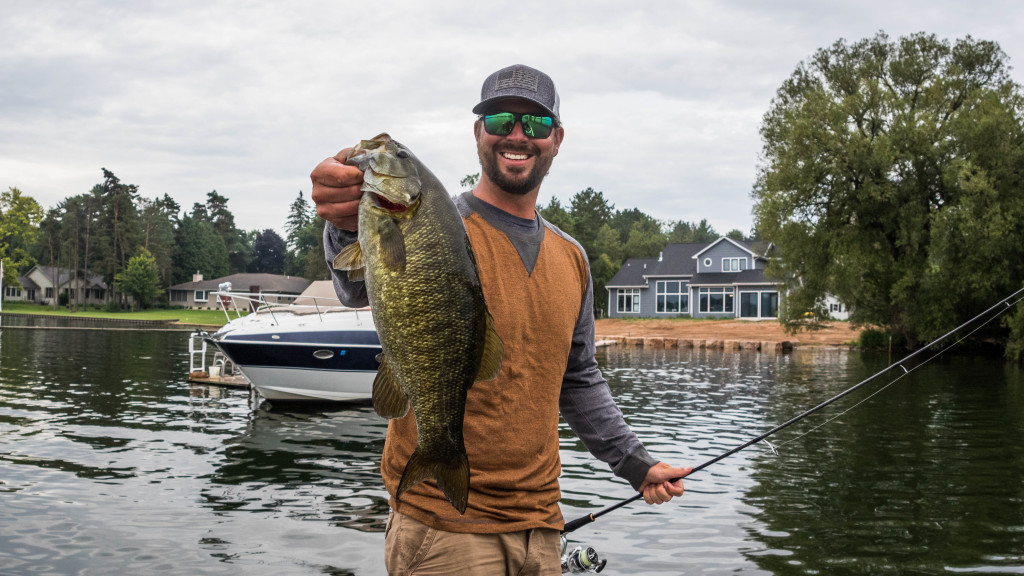 Having fished as a pro on the Tackle Warehouse Pro Circuit for five years now, Kurt Mitchell started coming into his own during the 2019 season. That year he qualified for the FLW Cup – for the first time in his career – by finishing 24th in the points. This year, Mitchell kept rolling along cashing checks in five of the six Pro Circuit tournaments to settle at 31st in the points and now finds himself in his second straight championship.

The difference this week, however, is that the Tackle Warehouse TITLE presented by Toyota follows the Major League Fishing (MLF) format of catch, weigh, release. Featuring the top 50 anglers from the Pro Circuit, the TITLE will be a smallmouth catchfest as they chase the $200,000 top prize.

Fresh off a win in the Toyota Series Northern Division event on Lake Erie this past week, Mitchell is riding high and looking to carry that into the TITLE on Sturgeon Bay this week. With that in mind, I took the opportunity to join Mitchell on day one of practice for his first look at the playing field for the TITLE. 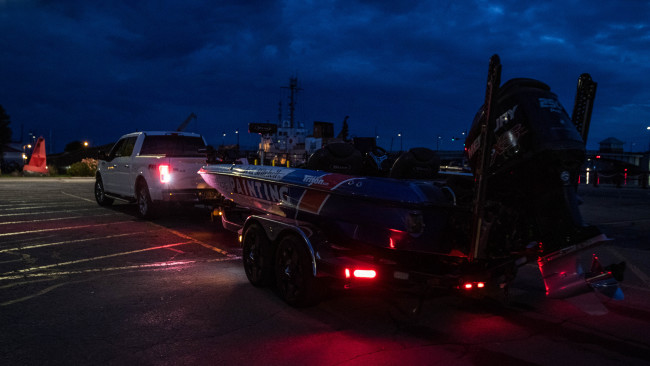 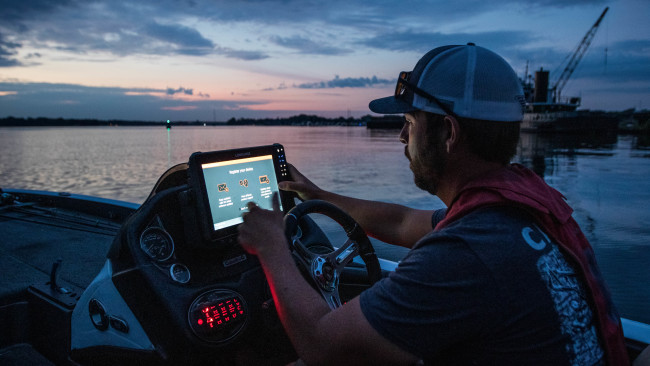 With only two days of practice for this event before the competition starts, Mitchell is eager to get on the water and start dissecting the massive fishery. We meet up at the Sawyer Park Boat Ramp a little before 5:30 a.m. in the cover of darkness.

After splashing the boat, Mitchell begins to idle towards Green Bay and fires up his Lowrance.

“I’ve never been here before in my life,” says Mitchell. “I have zero waypoints in my graph, so we’re just going to run around and try to check a bunch of stuff out.” 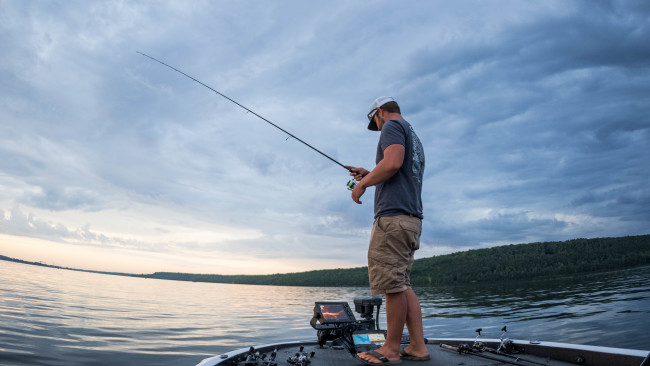 Our first stop of the morning is at the mouth of Sturgeon Bay. Since Mitchell just came from Lake Erie, he’s already rigged up for smallmouths and grabs a drop-shot to start making his first casts. 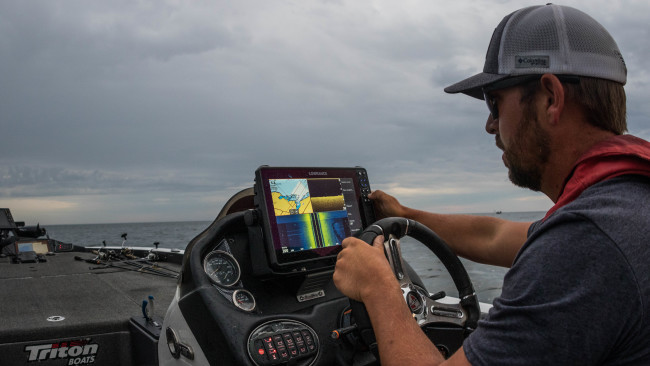 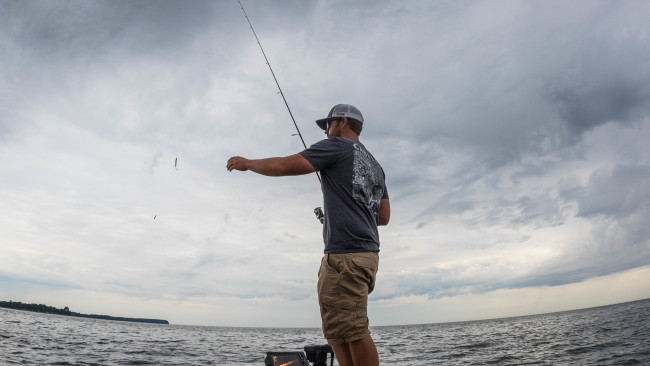 Not staying in an area for too long, Mitchell is utilizing his electronics – both on the console and bow – to help give him confidence where to make a cast at. We begin working our way out into the main body of Green Bay as Mitchell idles over a few different shoals.

“There’s just not a lot of big rock on some of these places like I’ve seen on other Great Lakes,” he says. “I haven’t seen anything that looks really good yet.”

Working our way south, Mitchell combs through an area relatively quickly when it does pique his interest, making very few pitches with his drop-shot. He’s trying not to get locked into a spot for very long, especially if it doesn’t look as prime as he’d like or if he doesn’t see fish on it. 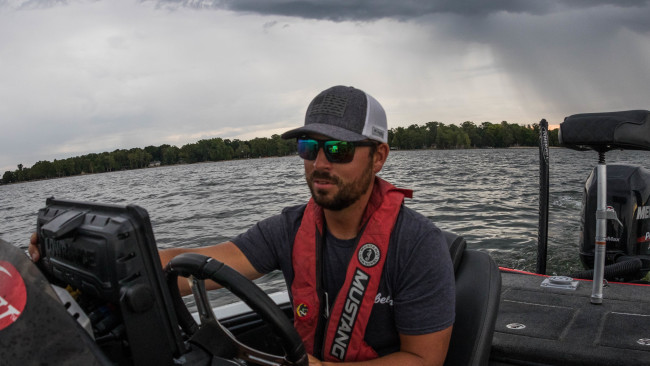 The morning is relatively humid for a Wisconsin summer and there’s little to no wind. The only issue is that there are small, isolated showers passing through the bay and neither Mitchell nor myself are too keen on sitting in them. So, Mitchell thinks it’s a good time to inspect the west side of the bay, both to avoid showers and see if it offers something more to his liking.

After running over to Peshtigo Point, Mitchell sets down briefly only to see lots of sand and hardly any rock, so we crank up and head towards Menominee. Once there, a bigger shower pops up and Mitchell decides to rip back across to Sturgeon Bay.

“I’ll take the rain as a sign I shouldn’t fish over here anyway,” he laughs. 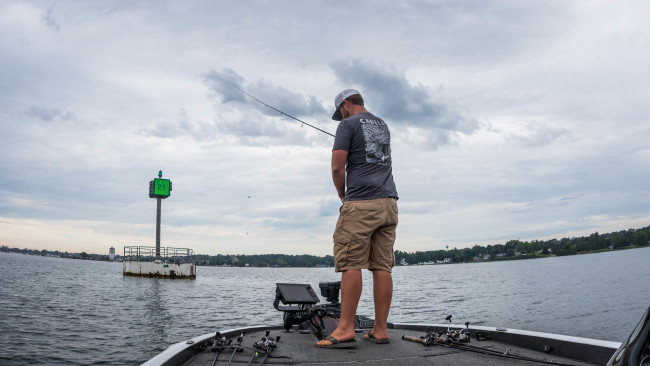 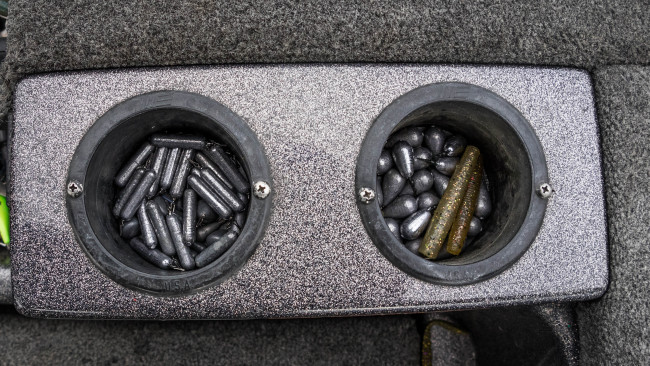 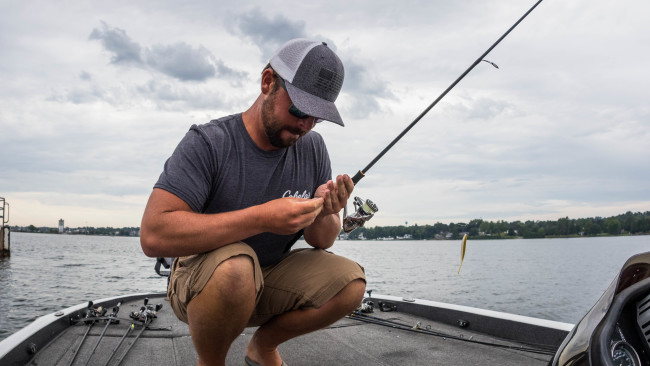 Despite being on the water for close to two hours now, Mitchell hasn’t really done much fishing. Pulling up to a channel marker, he makes his first cast in 45 minutes.

Mitchell is from Delaware, which isn’t a place that produces smallmouth hammers. So, I ask when he really got a taste of smallmouth fishing for the first time.

“I think it was like eight years ago that I first fished on Lake Erie,” he says. “I had no idea what I was doing. But now I’ve spent a more time there and, on the St. Lawrence, and Champlain, and I still may not know what I’m doing, but I’m more comfortable.”

After losing his weight, Mitchell digs a new one out of his cupholders, which have doubled as an easy-to-reach storage option for his drop-shot weights. With no bites, he pulls the trolling motor and we’re off to greener pastures. 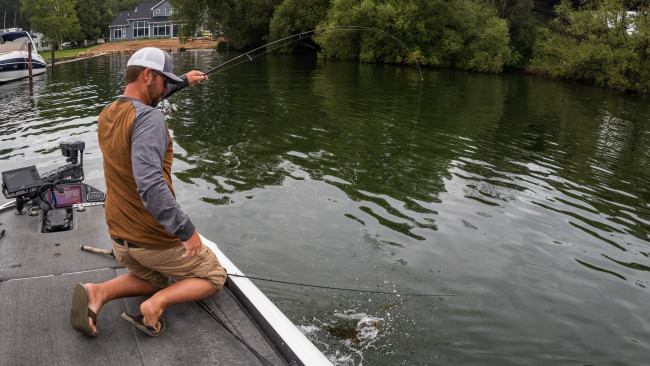 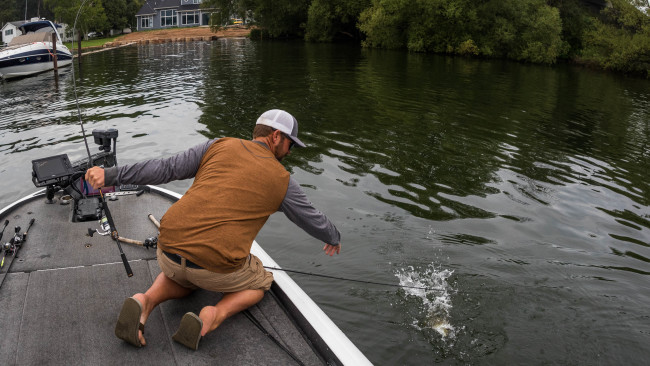 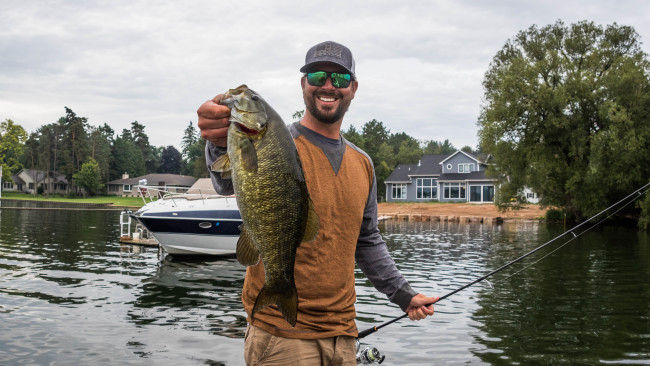 Working our way to the east, Mitchell stops on a dock and pulls out the drop-shot. It takes no time at all for him to hook up on his first keeper of the day.

“There, I finally caught one for you,” he jokes. “I was getting worried that I may never catch one today.” 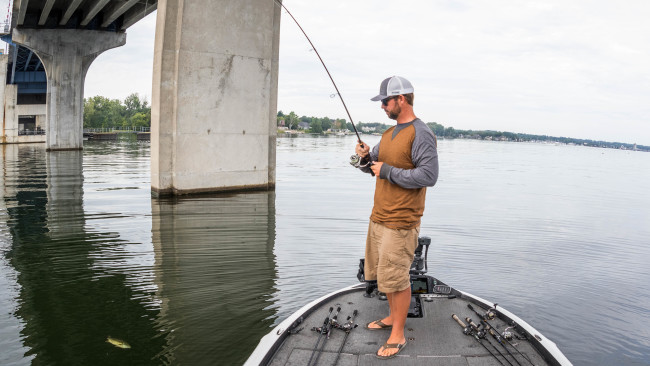 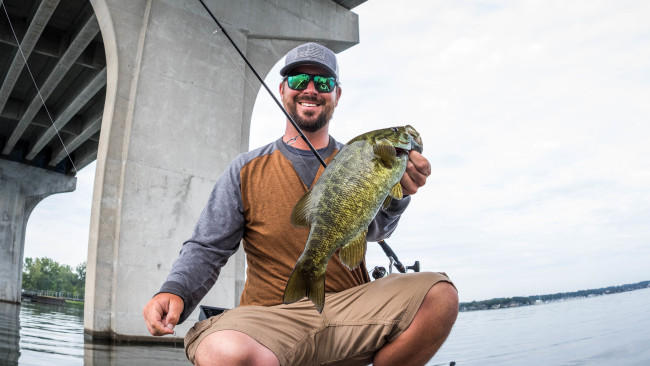 Feeling the groove, Mitchell works his way over to a nearby bridge and keeps pitching his drop-shot with a Yamamoto Shad Shape Worm around. Within minutes, he’s got his second keeper in the boat.

With the fish released, we continue our way towards Lake Michigan. 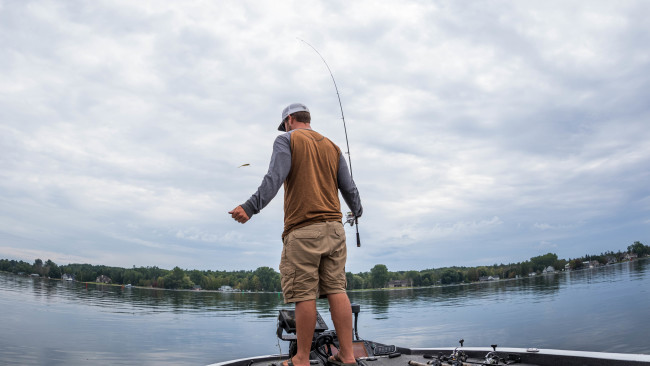 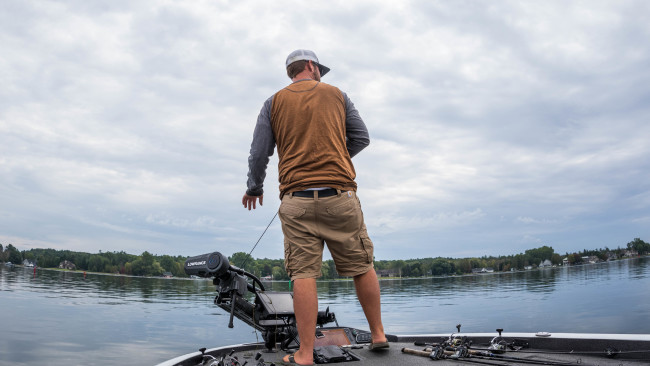 Mitchell stops on a flat outside of a small marina to check it out before making our way to Lake Michigan. He cruises with the trolling motor, looking at the grass and for any bass cruising around.

“I thought this would be a little deeper,” he says. “If this spot were on Champlain it’d be loaded with fish.”

With no takers, we’re on the move again. 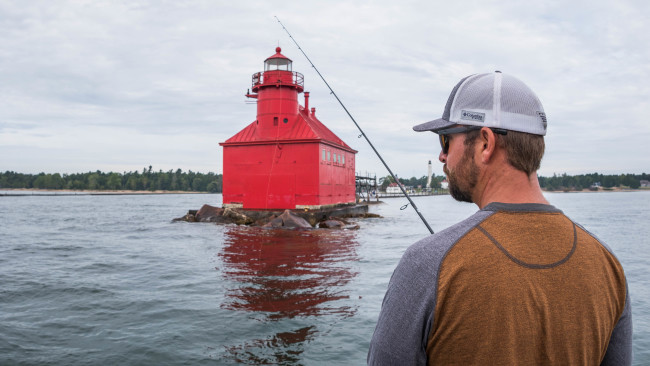 Stopping on the break wall at the mouth of Lake Michigan, Mitchell is already liking what he sees.

“The water here looks perfect,” remarks Mitchell. “I really like the look of this. Tell me there isn’t a bass on these rocks. I would bet money I’ll catch one here.”

Wishing I took the bet, Mitchell doesn’t get bit off the break wall, but seems more intrigued by what Lake Michigan has to offer compared to Green Bay. 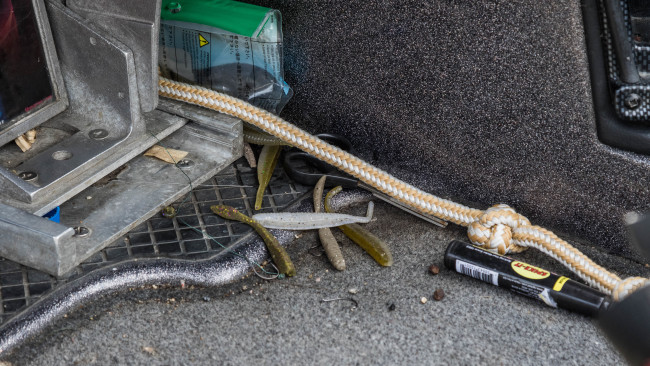 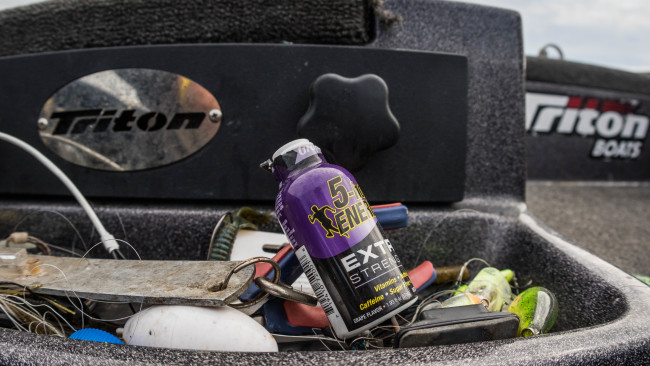 Moving offshore a ways, Mitchell sets down and starts scooting along on the trolling motor. While he’s doing so, I admire the piles of tackle laying in his boat from tournaments past.

“I think I’ve had two days off from fishing since La Crosse,” he says. “My boat is a mess.”

From war torn Shad Shape Worms, to 5-hour ENERGY drinks, you can tell the man has been on the grind and loves every minute of it. 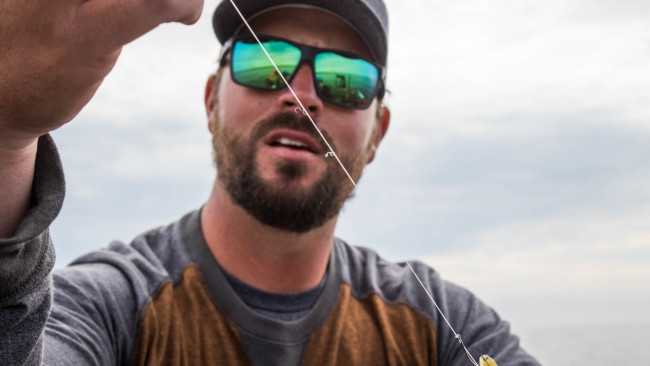 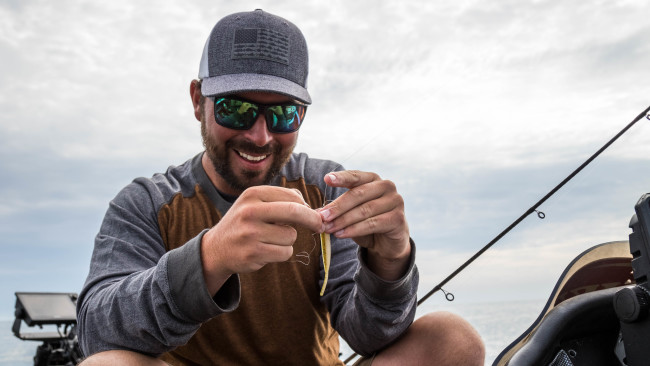 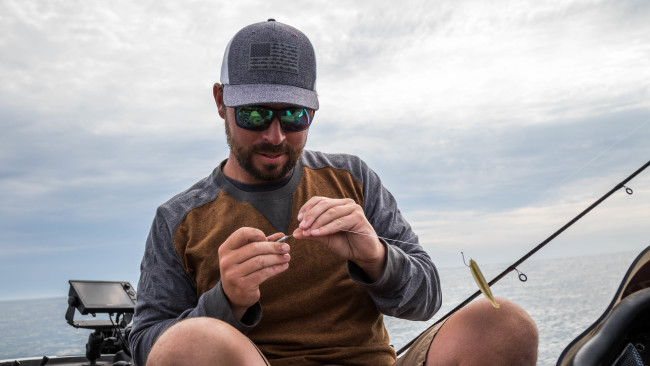 After his drop-shot gets hung in a rock, he gets it free only to find his line shredded from zebra mussels. So, he sits down to re-tie.

While he takes time to get his drop-shot back in action, I ask about how it feels to get a Toyota Series win.

“Honestly, I haven’t really thought about it,” he says. “I mean, it’s awesome, but I came here right after winning on Erie and now I’m thinking about this tournament. Ask me in a week or so and I’m sure it’ll sink in.” 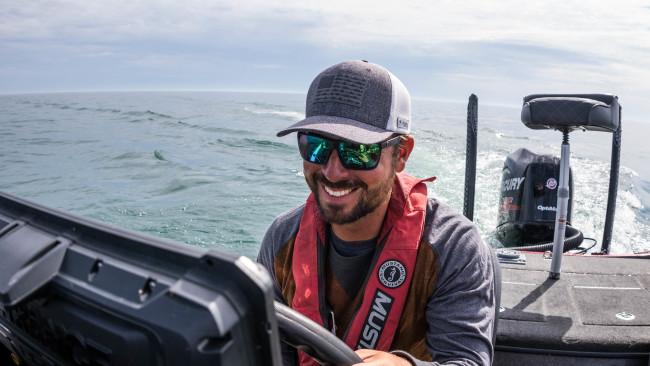 Mitchell wants to move north to a point that looks promising and after a short boat ride, we arrive.

“Sometimes on a smallmouth lake if I’m not catching anything I go to the most obvious structure and fish it ‘till I catch one. And we’re on it now.” 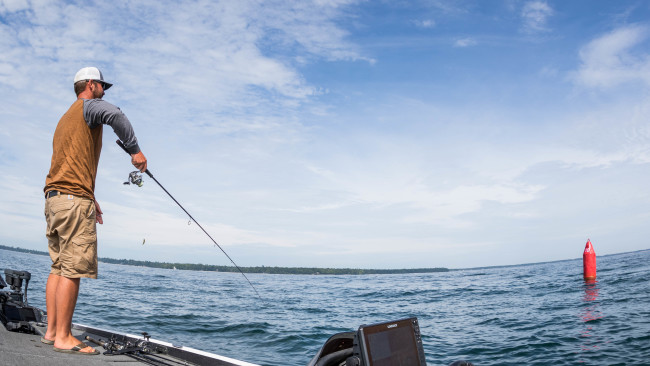 Fishing along the point, there’s a nearby channel marker that catches Mitchell’s attention.

“I gotta cast at it. I don’t know why smallmouths don’t seem to use these buoys on other Great Lakes, but they love them on Ontario.

“I guess since I didn’t get bit on it, they really don’t like to use them here either.” 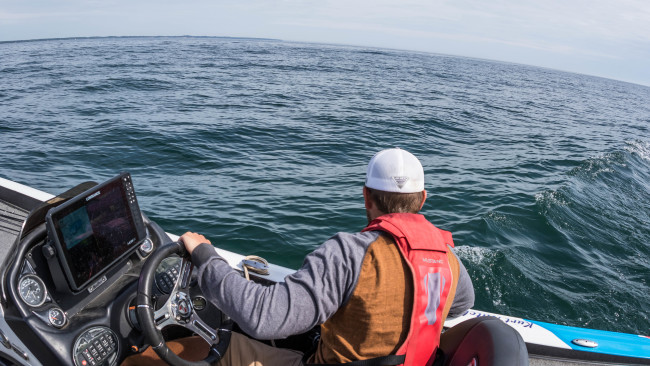 With no luck and the clock ticking past noon, Mitchell is fixing to pull the plug on Lake Michigan.

“The water is so clear here, I really love it. I can see bottom in 19 feet. That’s wild. I think the St. Lawrence is the only other place I’ve been with water close to this clear.

“I still haven’t found anything I really like yet, though. There’s rock here, but there doesn’t seem to be lots of it, or at least it doesn’t set up how Erie and Ontario do.” 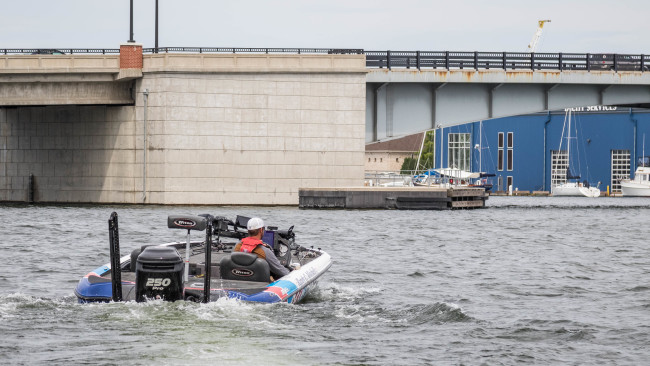 It’s close to 1 o’clock by the time we idle back to Sawyer Park. It’s time for me to leave, and time for Mitchell to keep picking apart this massive body of water. He’s not sure if he’ll relaunch somewhere this afternoon, but for now he’s going to bounce around some more close to the ramp. He’s still got a day and a half of practice left, which should be plenty of time for Mitchell to get in sync with this pond.