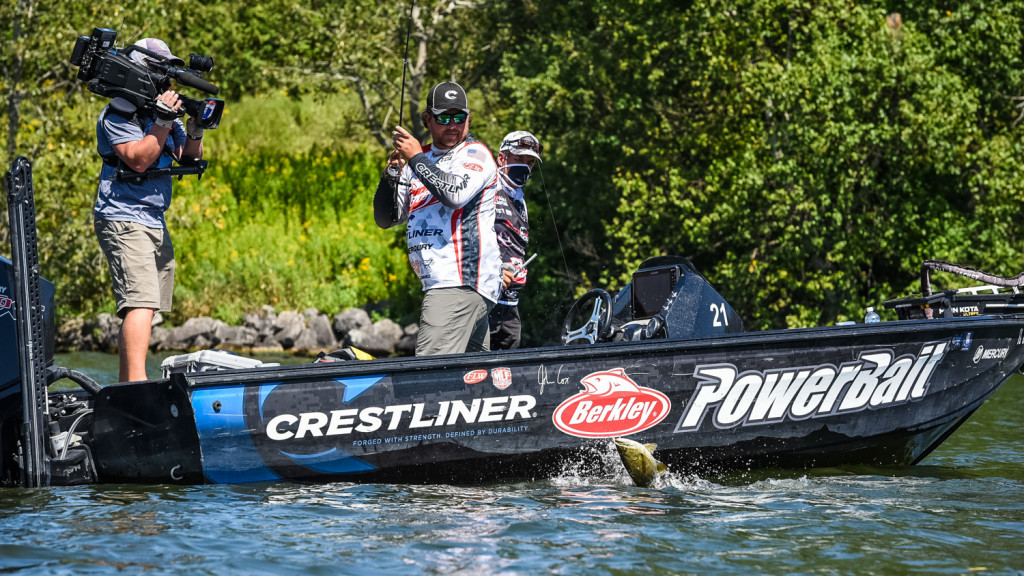 After a full-out runaway on Monday by Kurt Mitchell in the first Qualifying Round of the Tackle Warehouse TITLE presented by Toyota, Florida pro John Cox rolled into Sturgeon Bay around 10:30 p.m. Monday night following a 9-hour drive from a tournament on Lake St. Clair in Michigan. The Florida pro showed up at takeoff at 6:10 a.m. on Tuesday, picked up his STAT unit and official, and backed his boat into the water at Sawyer Park for his first-ever look at Sturgeon Bay.

“I guess we’ll just go practice and see how this goes,” Cox joked as he headed toward the ramp.

The plan went pretty darn well (after a few hiccups). The Berkley pro connected with 18 smallmouths for 66 pounds, 5 ounces to hold off Spencer Shuffield (61-2) and Joey Cifuentes (60-6) for the lead in Group B.

After plinking around docks and seawalls for nearly two hours without a scorable fish (and losing a couple of fish that he identified as 5-pounders), Cox connected with a 4-9 to get on the positive side of SCORETRACKER® late in the first period. The Berkley pro chipped away for the rest of the day with a drop-shot armed with Berkley PowerBait MaxScent Flat Worm and a MaxScent Flatnose Minnow, connecting with several quality smallmouth: he caught two 4-10s to work his way into the top five, and took the lead briefly two times in the second period with a pair of 4-11s.

Cox claimed the lead for good an hour into the final period with back-to-back 5-pounders – a 5-2 and a 5-1 that bit in a 4-minute span just as Cox was contemplating a move to another spot.

“What is even going on, I don’t even know?” Cox giggled to himself as he weighed in the 5-1.

Cox’s average fish was excellent: his 18 smallies averaged 3-10, with eight fish weighing in at 4-10 or better.

“The main goal today was just to learn, and I’m liking what I’m seeing,” Cox says. “I’m liking how it’s setting up. Fish are moving around a lot, so that gives you an opportunity to land on more than just one spot. We kinda landed on them, stayed on them and hammered them hard today. That was up there with one of the best smallmouth days I’ve ever had.” 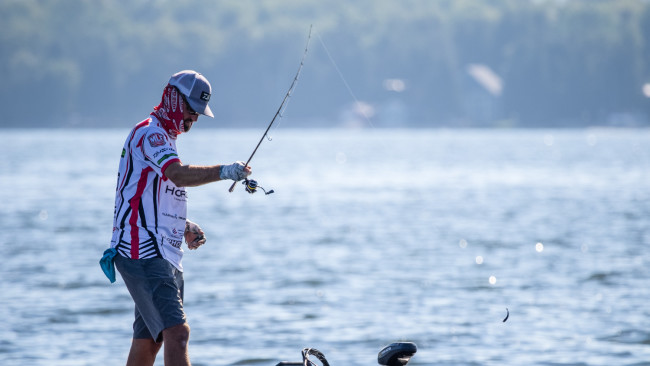 Shuffield entered the week with a well-defined game plan to rotate around a series of spots on Green Bay where he could catch 20 pounds per period. The Arkansas pro’s plan worked to perfection in the first period as he caught nine fish for 29-13 and a solid lead, but it unraveled in Period 2 as Shuffield’s move yielded only two fish for 6-8.

Shuffield was boondoggled by lost fish – he estimated six (including at least two in the 5-pound class) in the second and third periods before he recovered with eight fish for 24-13 in the final 90 minutes of the day. That happened on a spot that quickly developed into something that Shuffield is enthusiastic about exploiting when he returns to his second qualifying day on Thursday.

“They’re (biting) so weird, but I’m thankful for what I caught,” Shuffield says of Green Bay’s smallmouth. “They nip it, they ‘tic tic’ it, but they don’t load up. I feel them pull on it just for a second and then get off of it. I lost so many good fish today, it makes me want to throw up, but I’m thankful I’m here. I have a sweet spot that I think I can catch 30 pounds on. I feel like this spot is pretty dynamite.” 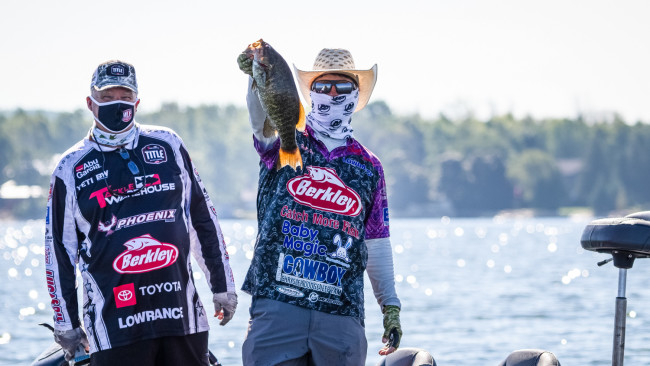 3. Joey Cifuentes – Clinton, Ark. – 18 fish, 60-6
Cifuentes went to work with a slightly shallower pattern than most of the rest of the field, identifying a series of slight depressions amid the rock, sand and grass on a long shoal in Green Bay. Cifuentes stacked up seven fish for 23-9 in the first period and then jockeyed for the lead through the first hour of the second period before hitting an afternoon lull.

Cifuentes reconnected with his bite late in the day, adding 23 pounds to SCORETRACKER® in the final period.

“I had some highs and I had some lows,” Cifuentes says. “Most of the places I’m fishing have real big balls of shad and a ton of gobies – there’s just a lot of life, and that’s really what you have to find here. I’m catching a lot of walleye, too, so (that shoal) is basically a big dinner plate. These smallies move so much, they’re here and then they’re gone. There’s nothing special about (what I’m doing), except there’s a few fish around. You drop a Berkley PowerBait MaxScent Flat Worm in front of their face and they’ll eat it.” 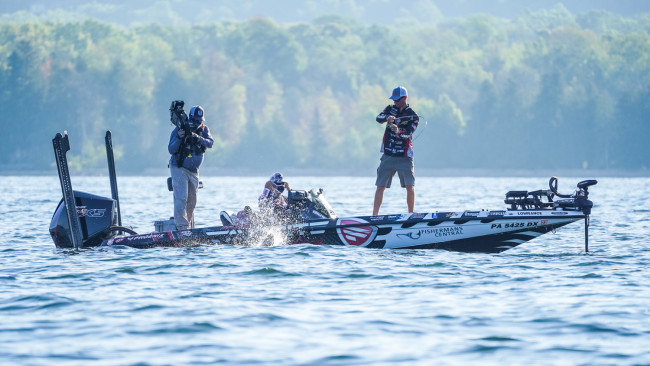 Becker was a pre-tournament favorite heading into the week – FLW commentator Todd Hollowell chose the Pennsylvania pro as part of his Insiders Watch List – and he started out of the gate strong, drop-shotting up three 4-pounders (4-4, 4-5 and 4-1) and 19-5 in the first 90 minutes.

He hit the same mid-day lull that many in the field experienced, but finished the day with 10-8 in the final hour.

“Fifteen bass is a good day out here right now,” Becker says. “It’s a tough bite. I know I put my bait on top of 50 or 60 smallmouth, they’re just not biting good. If I can find a way to get them to bite later in the week, it could get pretty interesting. I wanted to catch five fish a period and I did that, so I’m sitting in good shape.” 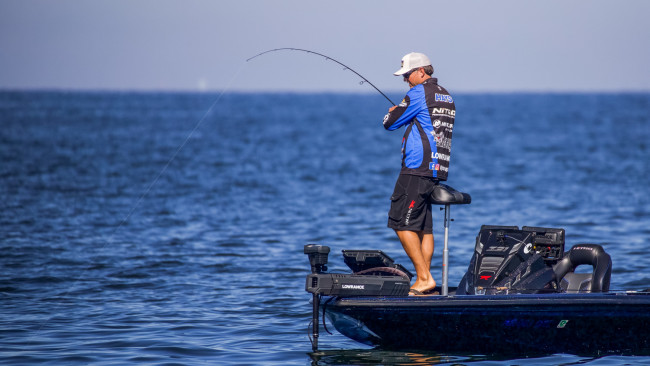 Despite the sluggish finish, Hays believes he did enough work in the first two periods to give himself some breathing room when Group B fishes again on Thursday.

“I had a real solid first period and led a lot of the mid-day, but I chose to check out some new areas to see if I wanted to fish them (on Thursday),” Hays says. “All in all, I had a good day. I wanted to get in that 60- to 70-pound range today so I could practice a little that second day, but I’ll have to catch some. Maybe 20 pounds for sure.”

The 25 anglers in Group A return to the waters of Sturgeon Bay tomorrow for the second and final Qualifying Round of Group A qualifying competition. The 10 anglers with the best combined weights in that group after tomorrow will advance to Friday’s Knockout Round.

Kurt Mitchell will head out with a virtually insurmountable lead – his 119-10 from Day 1 gives him a 56-pound lead over Grae Buck in second place; more importantly, the Delaware pro has a 92-pound cushion over the 10-place spot. The battle around the Elimination Line is much tighter. Jon Canada sits in 10th with 26-12, but eight anglers will enter the morning within 10 pounds of that final qualifying spot.

The weather is forecast to turn on Tuesday night, with heavy rains predicted to arrive shortly after midnight and south/southeast winds picking up to 10 to 14 mph with gusts up to 20 in the afternoon.

Watch all three periods of competition from day three of the TITLE via the FLW Live stream, which will be hosted at www.majorleaguefishing.com. Click on the WATCH NOW link in the blue bar at the top of the page.