Top 20 Set for Knockout Round

Cifuentes leads the way in Group B 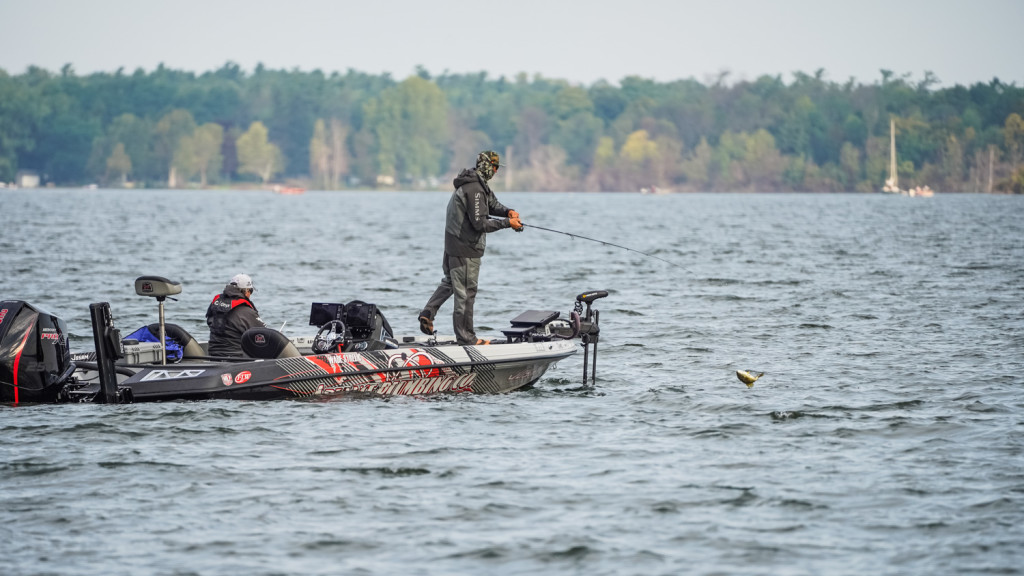 The official name of the competition round that played out Thursday on the fourth day of the Tackle Warehouse TITLE presented by Toyota is “Qualifying Round,” but in reality, the name “Back Against the Wall Round” is probably more fitting.

As was the case during Wednesday’s Group A final Qualifying Round – in which the round winner caught only 8 pounds on the day and the 2020 Tackle Warehouse Pro Circuit Angler of the Year squeaked into the top 10 by the skin of his teeth – the pressure of the multi-round, pressure-cooker Major League Fishing competition format instigated multiple storylines up and down the 25-man Group B lineup.

It started with the conditions, which resulted in roughly 20 percent more scorable fish making it onto SCORETRACKER® then the previous day. That extra productivity influenced the day’s competition by more than 150 pounds overall, opening the door for bigger moves in and out of the top 10.

“Today was a big-time-perfect smallmouth day until it slicked off calm in the afternoon,” says FLW Live analyst Marty Stone. “There was some residual chop from Wednesday night – a nice smallmouth chop. Plus, anytime you get that wind like we had on Wednesday, it kicks the algae bloom away and cleans up the water. We had a good morning feed, the sun came out earlier, and it turned into that perfect smallmouth day. Guys were seeing those big schools, but instead of getting one or two bites, they could get multiple.”

In the end, 10 anglers survived the round to continue on to Friday’s Knockout Round, where they’ll join the top 10 finishers in Group A for a 50/50 shot at the TITLE’s Championship Round on Saturday. 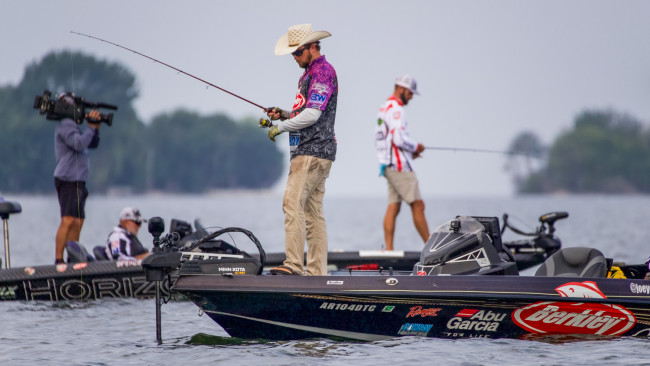 Multiple anglers inside the top 10 made slight moves up and down SCORETRACKER® throughout the 7 ½-hour competition day, but when all was said and done, eight of the 10 anglers who entered the day inside the 10 cut finished the day there.

Joey Cifuentes powered his way to the No. 1 spot in Group B, adding 49-5 to his 60-5 from his first day, ending the two-day Qualifying Round with 109-10 (all on a Berkley PowerBait MaxScent Flat Worm). The Arkansas pro’s primary goal on the day was to develop his pattern and run news spots on Green Bay in anticipation of the Knockout (and possibly Championship) round – develop them he did, eventually piling six fish for 28-11 on the scale in the second period alone.

“I just couldn’t help but catch them today,” Cifuentes says. “That was a long day right there. I started off really slow, but put a few things together as the day went on. I ran mostly new water, found some new places that I’m so excited about for the Knockout Round. I’m pumped to get to the Knockout Round. We’re not holding anything back now, I’m going to put the hammer down.”

Spencer Shuffield added 33-1 to finish second in the group with 94-2, Wade Strelic connected with 43-12 to climb to third with 87-4. First-day leader John Cox left his primary area far behind, starting the morning with a 90-minute drive to a new area on the far side of Green Bay and trailering to a handful of new locations throughout the rest of the day.

Cox eventually finished with seven fish for 20-5, settling into fourth place in Group B with 86-10.

“I feel like I got a practice day back,” says Cox, who arrived in Sturgeon Bay late the night before his first competition day and fished without practicing. “I had a spot that I really wanted to look at, thinking to myself ‘That spot could be the spot to win it on’ so I went to take a look. I got it out of my mind.” 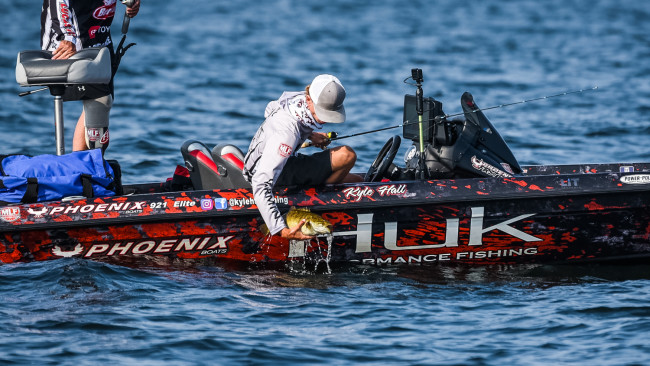 With just 15-7 in the bank after his first day, South Carolina pro Bradford Beavers found himself deep on the wrong side of the Elimination Line when lines went in at 8 a.m. Thursday. Beavers started the morning in 25th place, more than 16 pounds out of the top 10.

Beavers started chipping away at the deficit with a six-fish, 19-pound first period before a slight slowdown in Period 2. But Beavers reconnected with his fish in the final period, adding seven smallies for 26-12 in the final two hours and finishing the day with his biggest fish of the event (a 5-1). Beavers finished with 56-1 for the day and 71-8 for the round to complete a 16-place high jump into eighth place.

“I started running new water out here, eventually came over to an area where I caught one fish the last day of practice,” Beavers says. “I was around fish, but could only get one out of every five to bite. I caught some of the right ones, though. It was stressful – I had to keep catching them.”

Meanwhile, the 2020 Tackle Warehouse Pro Circuit Rookie of the Year saw his third period go in the exact opposite direction.

Texas pro Kyle Hall entered Period 3 in seventh place with 41-15, a performance that rocketed him into the Top 10 after starting the day in 18th place. But after putting a 3-9 on SCORETRACKER® with roughly 30 minutes left in Period 2, Hall failed to locate a scorable smallmouth for the next three hours and gradually dropped down the leaderboard into 10th place.

Hall eventually held onto the final spot in the Knockout Round by 1-2 as 11th-place finisher Alex Davis lost two fish in the final 15 minutes.

“I couldn’t get a bite the last few hours,” Hall says matter-of-factly. “I had to improvise a little bit today, and I thought I needed another 10 pounds to secure (a spot in the top 10). That was a lot of stress.” 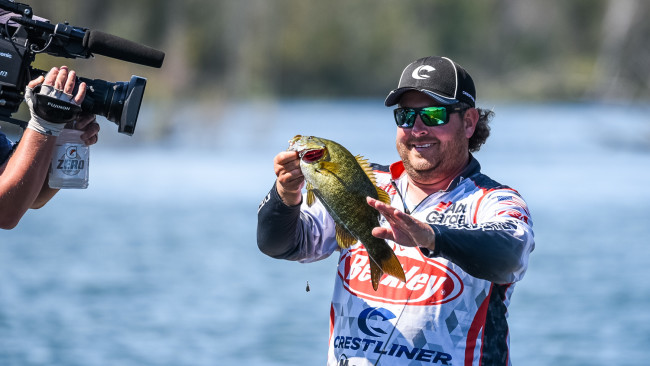 The top 20 anglers from Group A and B Qualifying Rounds will compete in Friday’s Knockout Round. All weights from their two-day Qualifying Round competition will be zeroed. The 10 anglers with the most weight in the Knockout Round will advance to Saturday’s Championship Round, where they’ll compete for the $200,000 winner’s check and the first-ever TITLE champion’s belt.

The Friday forecast calls for morning showers starting at about the end of Period 1, increasing to afternoon thunderstorms. Winds will be steady around 10 mph through the morning, diminishing to almost flat calm around noon.

The biggest X-factor will be the wind Thursday night (gusts to 21 mph) and the carryover effects of the previous two days’ weather on stretches of water that Group A and B qualifying round winners John Cox and Kurt Mitchell did their most damage on in the early rounds.

The Berkley Big Bass of Group B qualifying competition was the 5-11 caught by Clark Reehm on Tuesday. Reehm claims a $500 Big Bass Bonus for that fish.

Watch all three periods of the Knockout Round of the TITLE via the FLW Live stream, which will be hosted at www.majorleaguefishing.com. Click on the WATCH NOW link in the blue bar at the top of the page.