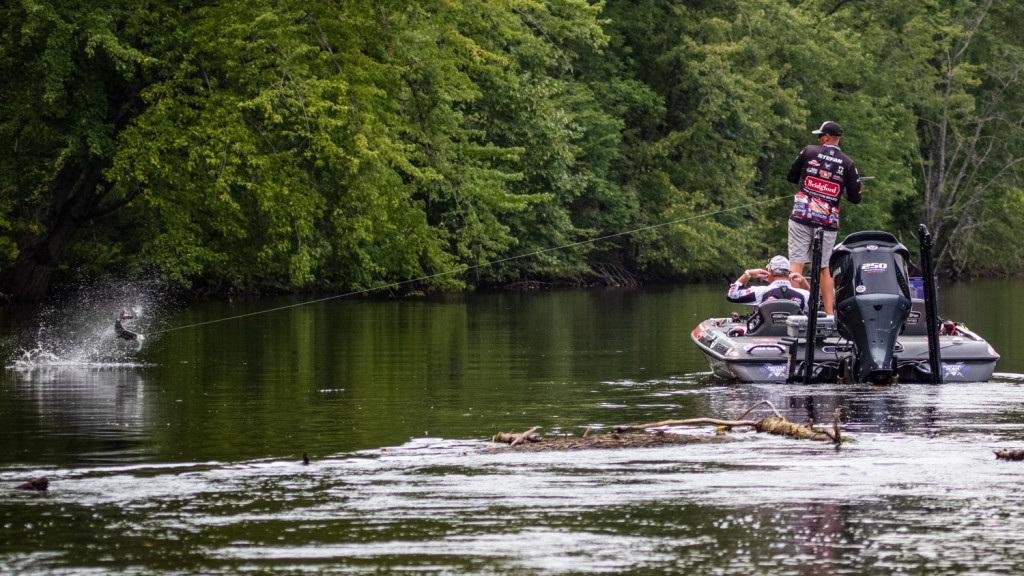 From the Mississippi River to the Peshtigo River, Wisconsin and the surrounding region has miles of flowing water chock full of smallmouth bass. In the recent Tackle Warehouse TITLE presented by Toyota, Matt Stefan targeted rivers flowing into Green Bay for the majority of his catch, and in doing so, he was able to tap into a skillset that he’s groomed for years on the Wisconsin River and other flowages near him. 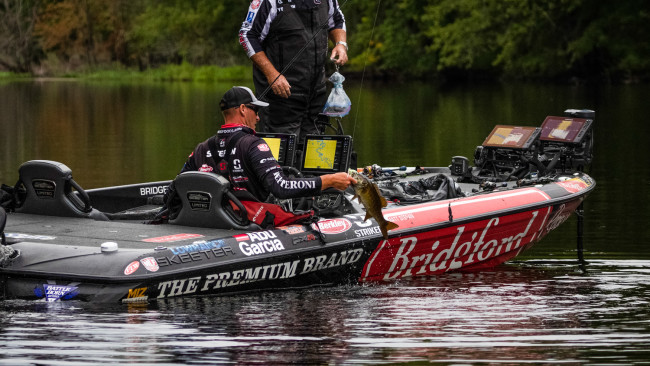 Much different than a river like the St. Lawrence or Detroit River, the rivers in Wisconsin are usually fairly shallow, very winding and have clear, coffee-colored water. Unless you’re tuned to assume they have smallmouth in them, the rivers often look like largemouth territory, with log jams, laydowns, patches of grass and little visible rock. Still, beneath the surface, they’ve got the right conditions for smallmouths to thrive – the water is clean, the bottom is mostly packed sand or gravel and there is plenty of current to keep food sweeping toward them.

“It’s interesting to me that my official, and the camera boat guy, they were all flabbergasted that I was catching smallmouth in there,” says Stefan. “I’ve never been anywhere else where I’ve seen it, all our rivers here, they’re coffee-colored, and they all have smallmouths. The Wisconsin River flows through the entire state, and the Wolf River, and really the Mississippi River too. It’s just normal, and in most cases, you might catch a largemouth, but you’re targeting smallmouths.

“You’ve gotta get over the mindset of not fishing it because it doesn’t feel right,” says Stefan. “It’s a blast, our rivers here are loaded with fish, and big ones. You’re not going to catch the giant bags like you do on the cisco fed lakes or the Great Lakes, but every one of them is a blast to catch because they’re so strong. It’s like warfare, they take you for a ride, it’s such a fun way to fish.” 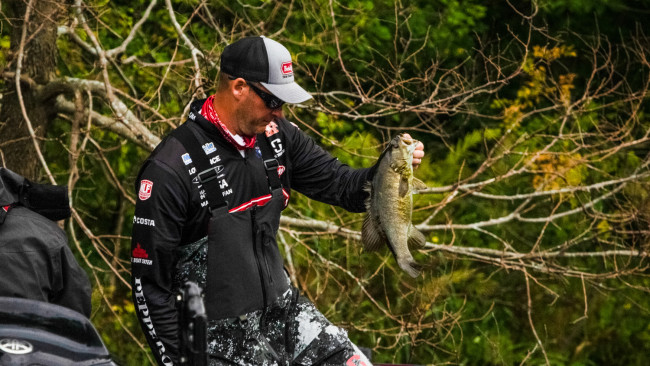 How to target summer smallmouths

When the water is warm and the fish are concentrated primarily on feeding, targeting and catching them is a pretty simple recipe.

“Smallmouth are very much current-related fish, and you have two different stages of activity levels in a river,” explains Stefan. “One is when they’re active and feeding, then they’re usually up tight to the bank and utilizing the current to position themselves and the food. Those are the most accessible fish, and that’s pretty much what I was fishing for, because I didn’t want to slow down and do something else.”

The less active fish are typically out of the current, either in deeper holes or stretches of the river or under log jams. Unless he’s intimately familiar with the river and knows where inactive fish will be, Stefan prefers to target the easy pickings.

“Those active fish are the ones you want to target to start with, and really, they’re going to be bank-related,” says Stefan. “You’re looking for anywhere the current leaves the bank or hits the bank, because those are the two strongest points of current and they’re the most accessible areas. In most areas when you have that, you’re going to have either a log jam or an undercut bank, and those are really key situations.” 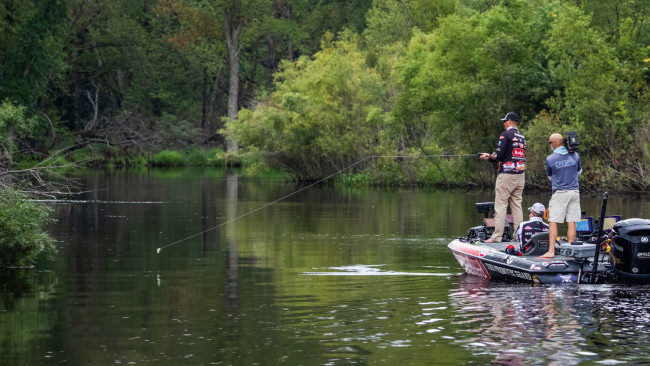 Though the fish are aggressive, making just the right presentation is extremely important. Because of the flow and how tightly the fish can be positioned near a log, on a small ledge or under a cut bank, the bite window is small.

On a cut bank, Stefan emphasizes that a cast very close to the bank is key – sometimes, the fish will almost come from under the bank to eat.

“When they’re set up there, usually you don’t need to make tons of casts. They’re waiting for something to come by, I had several fish literally throw their backs out of the water to eat the bait,” says Stefan. “There either was a quick little ledge down, or just a little undercut bank, and it looked like they came flying from dry ground.”

For a log jam or lay down, the presentation takes a good cast, and the proper retrieve.

“If you’re fishing log jams or wood on the bank, you want to let the current take your bait into the log jam or under the wood,” outlines Stefan. “There were a lot of times where I wasn’t even reeling, and I would just pop my rod and drift it.”

When fishing rivers for smallmouths, most of the bites come in the first couple feet of the cast, so Stefan doesn’t usually work the bait more than halfway back to the boat. Still, even once you’ve left the prime window, you want to be working it right.

“It seems like the bait needs to be at a point where you see it and don’t see it,” says Stefan. “If I’m hopping it, I want it hopping in and out of my viewpoint. It seems like if I bring it back too deep or reel it too high you don’t get as many bites. But, for the most part, the fish are set up on a piece of cover, so you don’t get many strikes coming back to the boat.” 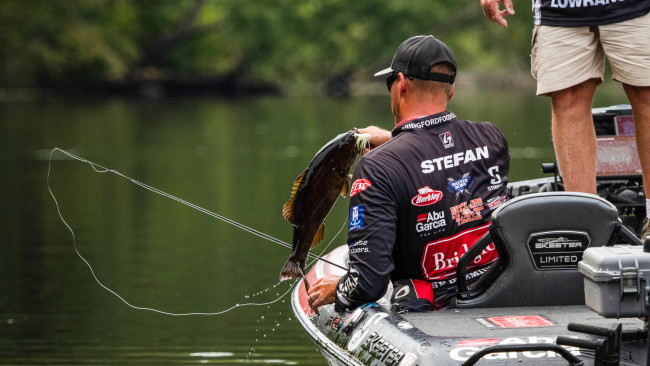 From a tackle standpoint, Stefan’s No. 1 attack for river smallmouths is a 3/8-ounce Dirty Jigs Swim Jig in some chartreuse and white combo with a 3.5-inch Berkley PowerBait The Deal or a Berkley PowerBait Power Swimmer. For his rod and reel, Stefan uses an 8:1 gear ratio Abu Garcia Revo MGX filled with 15-pound-test Berkley Trilene 100% Fluorocarbon on a custom rod built on a MHX NMB873 blank. It’s a versatile setup that gives him the muscle to play feisty smallmouths in tight quarters and lets him present moderate sized baits very efficiently.

Outside of the swim jig, which was by far his go-to in the TITLE, Stefan does employ a few other baits. One is simply a smaller swim jig, the Dirty Jigs Finesse Swim Jig, which he likes for great smallmouth hookups. He also mixes in a spinnerbait some and keeps a Dirty Jigs Luke Clausen Compact Pitchin’ Jig and a ½-ounce Berkley PowerBait MaxScent Creature Hawg at the ready for particularly thick cover or to pitch back to short strikes.

Stefan also likes to fish a topwater for river smallmouths, but he doesn’t do it much in tournaments because of the problems it can pose for landing fish. Still, he likes to run a Berkley Choppo 90 along cut banks, and says the strikes can be absolutely explosive.

The final piece of the river smallmouth arsenal is a frog. For Stefan, a hollow-body frog is the perfect bait to target the backside of log jams, where the current meets the bank. With braided line, a heavier rod and a snagless design, he stands a better chance of getting the fish out if they do bite. 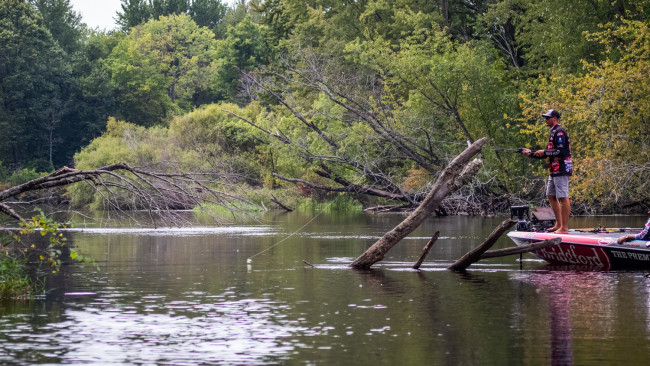 Stefan never really stops targeting smallmouths in Wisconsin, but to fish fast and with power techniques, the summer is the key time on the river.

“There will always be fish on that stuff, but the summer is the key time because all the fish are utilizing the current,” says Stefan. “In the spring, fish are spawning and in lighter current. In the fall, they will stay on the summer pattern until the water temp drops to about 60 degrees, and after that they start moving to wintering holes.”

If you haven’t done it much, you should get on it while you can. A smallmouth in a shallow river fights better than any lake smallmouth, and it’s a truly unique type of fishing.