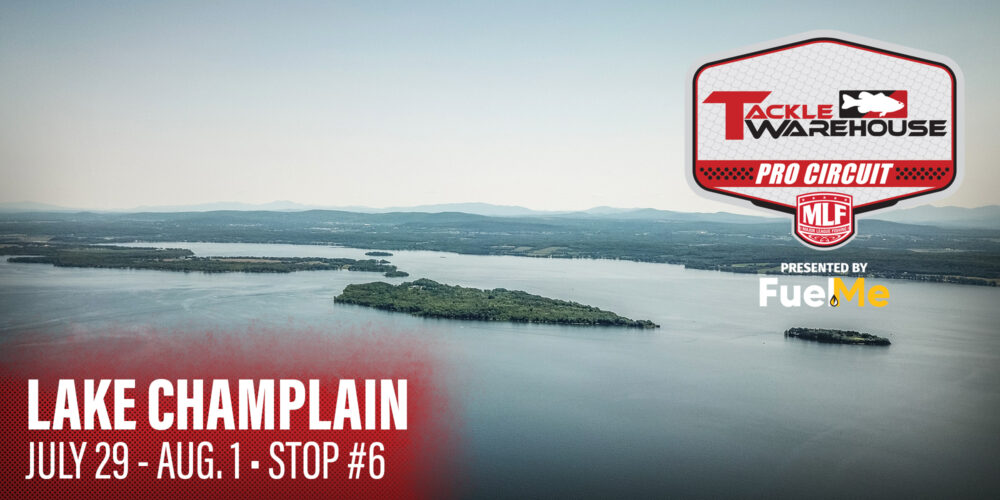 Can you think of a better way to end the Tackle Warehouse Pro Circuit Presented by Fuel Me regular season? Running south to north along the Vermont and New York border, Lake Champlain is a bass fishing gem. Loaded with smallmouths and largemouths, the big lake has an abundance of just about everything. Plus, the fish are pretty dumb, which makes it almost unfailingly fun to fish.

At more than 100 miles long, Champlain offers plenty of options, and it’s not hard to find something in your comfort zone no matter what you like to do. Plattsburgh, where the tournament takes off, is a great place to be for access to the plentiful smallmouths in the more open areas of the north end, and it provides equally convenient access to the largemouths in the bays. The only issue is getting to the largemouths down south near Ticonderoga, which involves a 60-mile run over a lake that can get extremely rough at times.

Dirtier and grassier, Ticonderoga has a well-earned reputation as a great place to go to win or make money, but it hasn’t been as good in recent years. In 2019, Casey Scanlon won an FLW Tour event at Ticonderoga, but the 2020 Bassmaster Elite Series event on Champlain was dominated up north. In 2021, the winners of the Elite Series, Bass Pro Tour and Toyota Series events on Champlain all came from up north. In only one of those events did Ticonderoga factor at all, but, it was the BPT event held at probably the most similar time as this year’s Pro Circuit season finale.

The last few years, smallmouth have been the story on Champlain. It’s not a huge surprise around the spawn and in the fall, but even in the summer, smallmouths have been the main player in a lot of wins at the top level and the local level. Brandon Palaniuk started the summer smallmouth trend in 2020 with a 20-pound average to win. In 2021, Bryan Schmitt went the old-school combo route with fat northern largemouths to win the Elite Series event, effectively blowing the doors off everyone until he hit a subpar final day. Shortly after, with a little more weight on them, smallmouths were back on top in style, when Stephen Estes caught 61 pounds of brown in three days to win the Toyota Series event. For the BPT later in the year, Jacob Wheeler ran away with smallies on the final day.

Still, even with smallmouth at a historic peak for Champlain, discounting largemouth completely might not be wise. In 2021, the milfoil on the north end of Champlain was far from its usual self – good grass in 2022 could make largemouths a lot more competitive. Moreover, a lot of the really top-end bags on the year had some green. Schmitt crushed largemouth, and some local wins by the cream of the crop in Vermont featured big green fish. In one of the most impressive feats of the season, Bryan Labelle and Adam Dunkling won the LCI Bass Open with 29.37 (6) and had the lunker largemouth and smallmouth – the largemouth was a massive 6.31 pounds.

Even Ticonderoga had a bit of a comeback on the largemouth side. Estes won a Champlain Bass Series event fishing down south, and the BPT boys really showed it off. Ott DeFoe cranked wood and did great, while Timmy Horton frogged and Jacopo Gallelli flipped in the La Chute. Not too long ago, you had to run south to win – could we see the like again?

One thing to really keep an eye on in 2022 is the bait situation. Smallmouth gorged on alewives in 2021 and that really defined the early part of the season. Perch and alewives are the standard smallmouth forage, with some smelt mixed in, and finding concentrations of bait and bass might be the key to the event. It worked for Estes and quite a few others in 2021.

Trying to narrow things down on Champlain is almost impossible without passing up on some legit ways to catch a bass. In any given year, you’ll see flipping jigs, Texas rigs and wacky rigs bring in winning bags of largemouth. At the same time, a drop-shot, Ned rig, swimbait, spybait and topwater can put 20-pound smallmouth limits in the boat.

Generally, for folks fishing for smallmouth, some sort of finesse offering is important. Even more so with the advent of forward-facing sonar, where a well-placed drop-shot can get you right in a hurry. Of course, bigger swimbaits can do some damage, as can a jerkbait and a topwater.

Up north, largemouth usually fall for jigs, finesse baits and flipping stuff. With the cover mostly being docks, rock and grass, what the bass like to eat is pretty well established. Still, there have been some big largemouth bags caught on a vibrating jig, a topwater and more.

Down south, hard cover like rock and wood usually calls for a moving bait. Either a vibrating jig or a crankbait typically gets the call and does well, with something to flip if slower is more your jam. In the grass and mats, frogs, swim jigs, swimbaits and flipping reign supreme.

You certainly could gamble on a largemouth angler, but without a pile of local talent in the field, you’re pinning your hopes on skill or someone with history from years gone by. On the smallmouth side of things, Matt Becker, Ron Nelson, Scott Dobson, and Justin Lucas all have a lot of skill with brown fish and a long track record up north. Less northern, but still interesting, Kyle Hall and Dakota Ebare have demonstrated a lot of skill with smallies and forward-facing sonar.

On the local side of things, Cole Harris is really the only one in the field. Once a Vermonter, the rookie has stumbled in big events on Champlain, but certainly has the knowledge to do well. Also, though he has a Delaware address, Kurt Mitchell has spent a lot of time on Champlain and done very well mixing species before.

If you’re set on a largemouth gamble, anglers like Mitch Crane, Clabion Johns, and Randall Tharp could be good choices. Though it’s not a guarantee, a winning bag on the final day might well include some green fish.